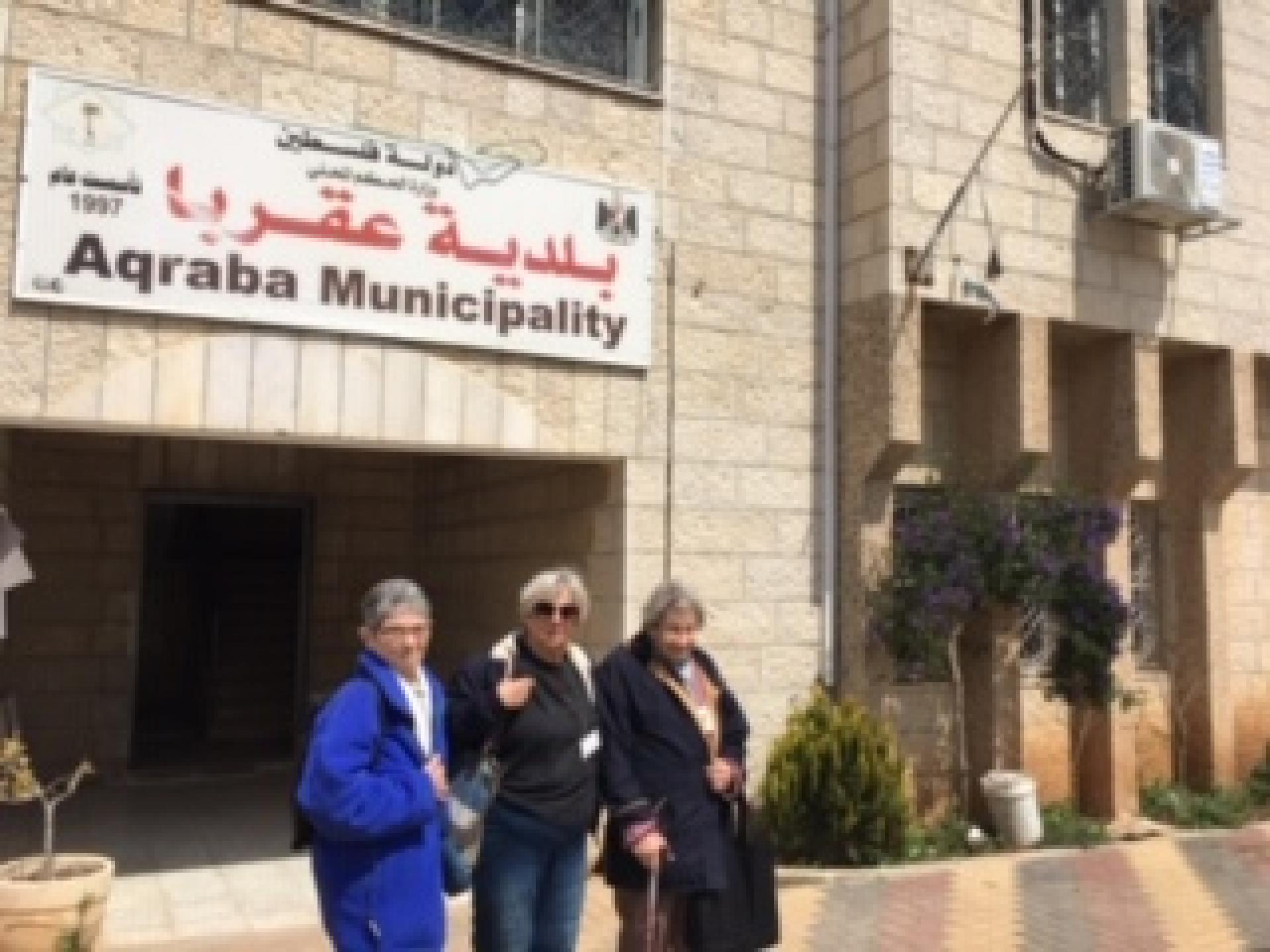 In front of Aqraba Municipality

MAIN POINTS: The main job of the Israeli Civil Administration and the Israeli army seems to be to make the Palestinians’ life as difficult as possible; and to assist the Israeli settlers in the same cause.

Aqraba: This is our first visit to Aqraba. At the municipality we speak with the man in charge of the town security. The population living now in Aqraba is 11,000; he says they still consider the 75,000 who live abroad as belonging to the town — 60,000 people in Jordan, 1,000 in the Gulf States and the USA, and the rest in various countries. They left the town in 1967, and can only  come for limited visits: but they cannot get permits to come back to live permanently. They do send money to their families and also to the municipality for town projects.

Originally, Aqraba had 144,000 dunams of land. However, into the surrounding area 12 settlements and outposts—Itamar, Gilgal, Masuah, Gittit, Maaleh Efraim, Pazael, Tomer and others—moved in. They have seized 85% of the private land owned and worked by Aqraba farmers.

HARASSMENT: Our host says there is no problem now, but there have been serious incidents in the

past. Two years ago settlers set fire at night to the ground floor of a house. Last March, again at night, two mosques were set on fire, and the words “tag mehir” (in Hebrew, meaning ‘price tag’ or revenge) were painted on the walls. Representatives of the Israeli political party ‘Meretz’ visited the town after the second burning. Villagers know other incidents might erupt, but not when.

Incidents in neighbouring villages also affect them. Such is the small village Yanun, which, our host tells us, is surrounded by outposts of Itamar. Recently, Itamar settlers, accompanied by soldiers, entered Yanun, attacked passersby and poured oil on their farmlands. Settlers seem to be doing all they can to get villagers to leave their homes and lands so they can move in.

Our host, who is also the local ambulance driver and a paramedic, was personally involved in an unpleasant way in 3 otherwise unrelated incidents. In May 2017, a settler killed a Palestinian in Huwarra causing unquiet in the town; he was there, and saved some wounded Israelis. Some 10 days later, on the road near his village, a car with a settler couple was overturned, he was called and tried to help the man in the car. Though the man at first refused to let him touch them or bandage them, he helped and drove them to hospital.

10 days later he was arrested for 21 days, because he had been in Huwarra during the unrest just mentioned. “What did he do? When he ran to save some young boys, a settler ran into his ambulance.” And now, days later, the settler inverting the incident, accused him of blocking the road and his car with the ambulance. He was taken to the police station in Ariel for interrogations, and every 3 days to court to extend his arrest; after 18 days he was sent to the “shin bet”, the internal security service. Though he showed them a video on his phone showing that he had not blocked the car, it was only after 21 days, that they sent him home, telling him he had been arrested “to quieten the settlers.” But they had impounded his ambulance and he had to pay 8,000 shekels to get it back. An Israeli human rights lawyer promised to get the money back to him. This happened in 2017; he has not yet received the money.

EMPLOYMENT: About 3,000 men work in Israel; 400 work in the settlements, and some in their own olive groves. Some men and women work for the Palestinian Authority; women mostly work as teachers.

MEDICAL SERVICES: The hospital is in Nablus. There is an emergency service that can be called 24/7 and twice a week a doctor comes to town. These services are provided by the PA. Our host’s ambulance belongs to the municipality.

EDUCATION: There are 3 elementary schools for boys and 3 for girls. There is one junior high/high school for boys and one for girls. The municipality plans to build 2 new schools; those who live abroad will pay for them. Each of the small villages of Yanun and Twiyeh has one mixed elementary school. Their pupils come to the Aqraba high schools. 85% of the students who graduate from high school go on to study at university, but there is no work for them in their fields of study. (Perhaps we should stop asking this question: we get the same answer in every town and village. It’s a rather sore point for the Palestinians.)

OSARIN: This is a small village of 2,052 people. We spoke with 2 young men.  They are university graduates in Political Science working for the Council; one is in charge of water supply and the other of electricity. (As usual, there is no work in their fields of study.)

WATER: During the summer there is not enough water for all the needs, so the different areas are cut off on different days.

HARASSMENT: The main problem is at the entrance/exit of the village to the main road. The settlers from Migdalim block the exit to the road about 90% of the time; the villagers have to walk to the road and from there they take a taxi. They also do not dare to stand on the road; they are afraid.

LAND: The area of Osarin is 220,000 dunams. 500 dunams are built-up area. About 80% of the land is in area C; they can’t build on this land and its use is very limited. They have olive groves and almond groves, but working in the groves is very difficult. Settlers come and bother them while they are working; after 18:00 the settlers throw rocks at them to chase them away. At night, trees have been cut down and the fruit stolen.

EMPLOYMENT: In addition to agriculture, about 50% of the men work in Israel. Not everyone can get a permit. Some men work in the settlements. The unemployment rate is about 20%.

EDUCATION: There are 2 kindergartens in the village. For boys there are 2 schools – an elementary school and a junior high/high school. For girls, there is one school: from elementary through high school.