The Palestinian Jordan Valley, cruelty for its own sake: serial home demolitions

At 10 a.m. we reached the northern Palestinian Jordan Valley, at the encampment of the two Mohammad brothers. The “elder” Mohammad, and the “younger” Mohammad. They both live opposite the Jewish settler-colony of Maskiyot (or was it Maskiyot that was built opposite their encampments?), renting the ground whose owner, a Palestinian, lives in the nearby town of Toubas. The two families number many women and children, who look quite neglected, and whose living conditions are minimal at best. They make their living from occasional work in the settler-colonies, from selling lambs in season, and the women produce and sell sheep- and goat-milk cheese. Shuli Bar and Hanna Barag (members of Machsomwatch) took it upon themselves to provide for Bisan, the disabled daughter of the “elder” Mohammad. Now, thanks to surgery and treatment she underwent in Israeli hospitals, she is able to move with splints and a walker, though she sometimes prefers to crawl.

Ever since the founding of settler-colony Maskiyot (as a para-military community in 1982), its settler-colonists have harassed the shepherd communities (mostly Bedouin) living nearby. The purpose – of course – is to make them leave. They don’t want to see Arabs around, they once said. Lately, their assaults against shepherds out to graze on the hills and slopes south of the settler-colony have grown frequent. Backed up by the Israeli army they chase the Palestinian shepherds away and exert violence against them. We were told that a day earlier, the settler-colonists attacked the flock, killed a sheep and scattered the rest.

Volunteers of Taayush and other organizations accompany the shepherds nearly every day. Without this accompaniment, the sheep will starve and the shepherds’ livelihood will suffer a deadly blow. 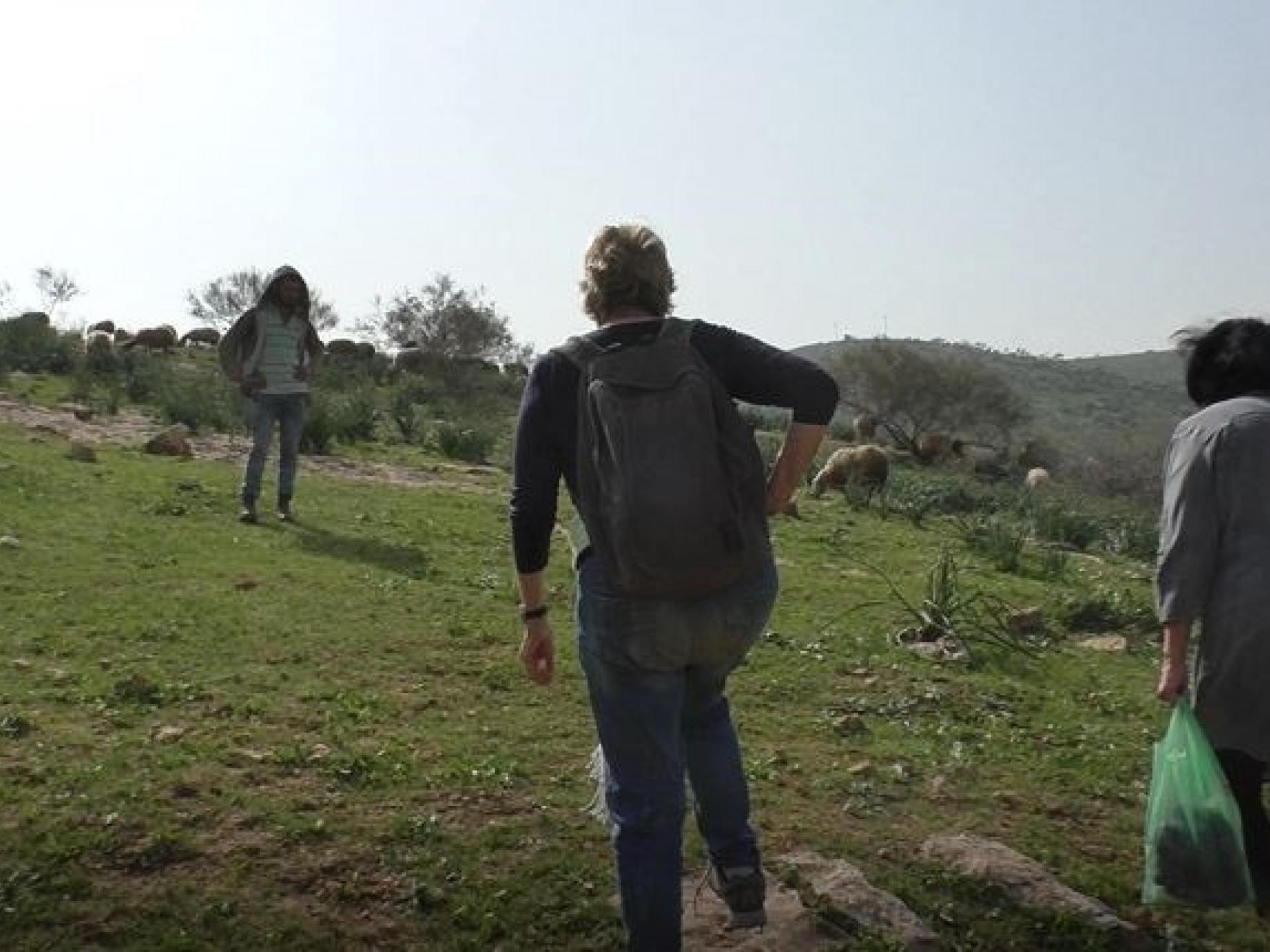 Ali, son of the “elder” Mohammad and Bisan’s half-brother, was already out to pasture when we arrived. His father explained his whereabouts and we were on our way. It was a beautiful sunny winter day. We climbed hills, slid to the valleys (on our butts…) and walked some kilometers until we found him. He decided to take his distance from the settler-colony Maskiyot eastwards, our presence serving him as a protective shield. We remained close to the flock on the hill until 1:30 p.m. and no settler-colonist was seen around (perhaps thanks to our presence).

We then paid several visits in Makhoul, to Najia, and to Rima who gave birth a month ago.

In the afternoon we drove to Fasail. On January 17, in the midst of a rainstorm, the Civil Administration of the “most moral state in the world” demolished the dilapidated home of Abed and Tahreer and their five children. The soldiers even tore away the 4-month old baby

’s blanket. The same soldiers were amazed that the broken father broke down in tears after remaining homeless and exposed with his children. See our report. 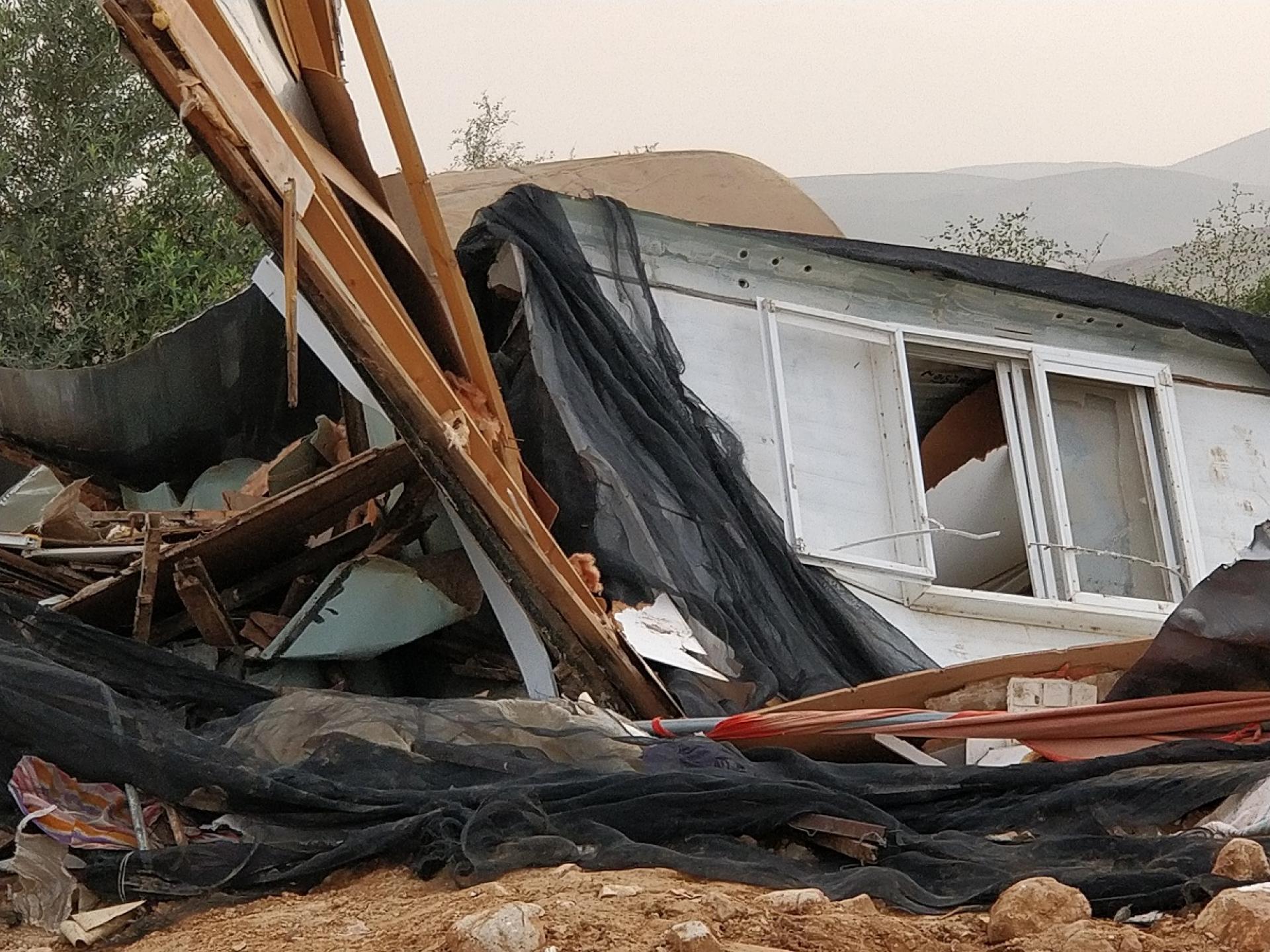 The home demolition of Abed and Tahreer

Two days after this destruction, Buma Inbar, Nurit Popper and Tzvia Shapira (the latter two – Machsomwatch members) brought the family some basic emergency supplies – a tent, mattresses, blankets, heating stoves, and toys. These were all financed generously by donating friends.

In the meantime, the family has not yet recovered. They sleep in the tent made of thin nylon that is no shelter from cold and rain. Tomorrow they will move to a more protected shelter. Around them, everything is still strewn and destroyed – furniture and kitchen equipment. The new things are still stored by neighbors until they move to the new home. They also asked for money, as the elder girl does not attend school, having no shoes.

We left at dusk, feeling terrible. A day after our visit we were told that Civil Administration personnel arrived, took pictures of the new home and said that they will shortly come and destroy it too. We suppose they’re waiting for especially stormy weather.