We planned to visit three nearby villages where we’d not been for a while:  Deir Balut, Kufr a-Dik and Brukin, all three located south of highway 5 and accessible via highway 446.  Though we didn’t have phone numbers for the municipalities and hadn’t made appointments we hope to meet people and obtain phone numbers for future visits.  We were made welcome in all three localities. 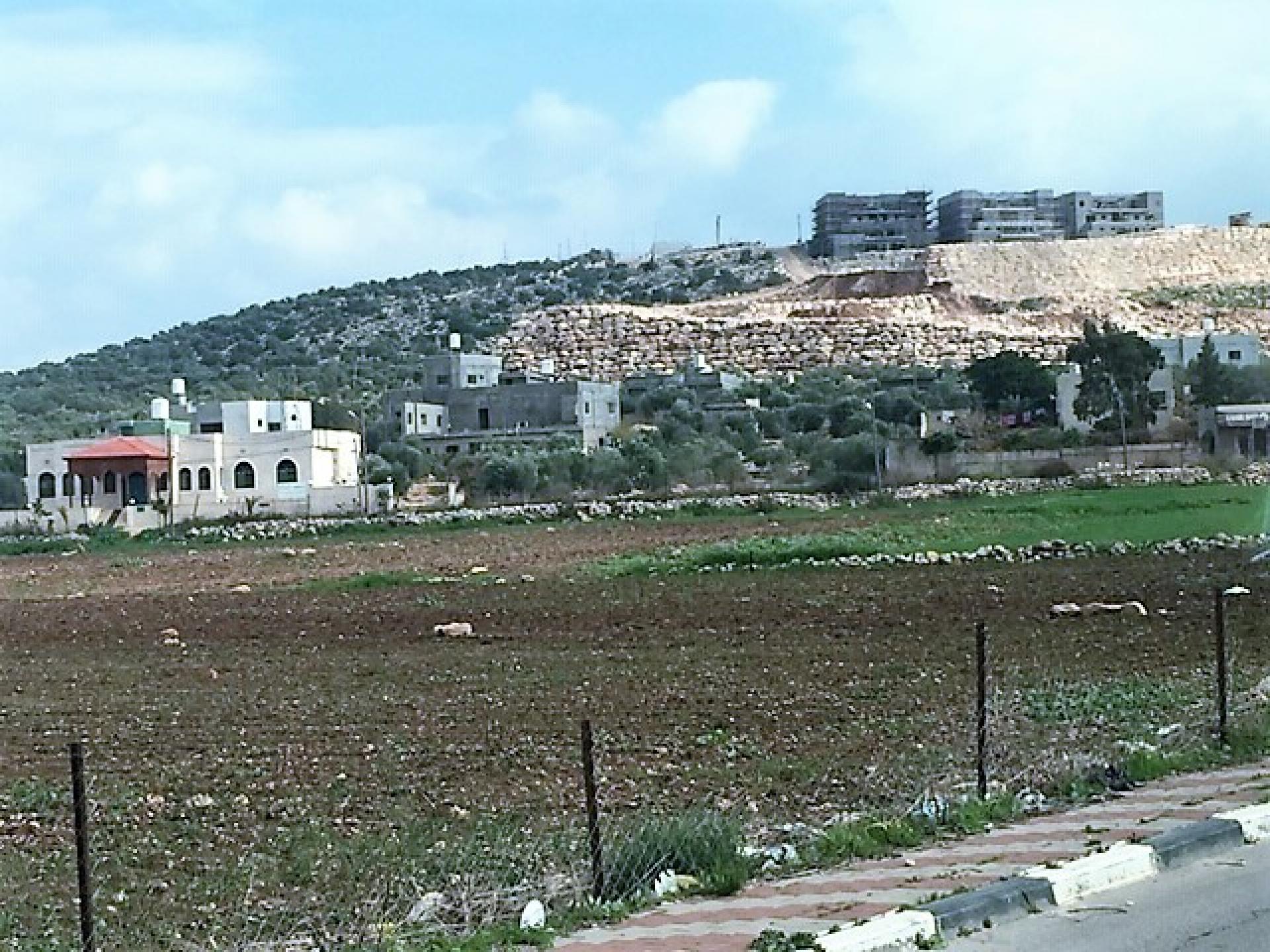 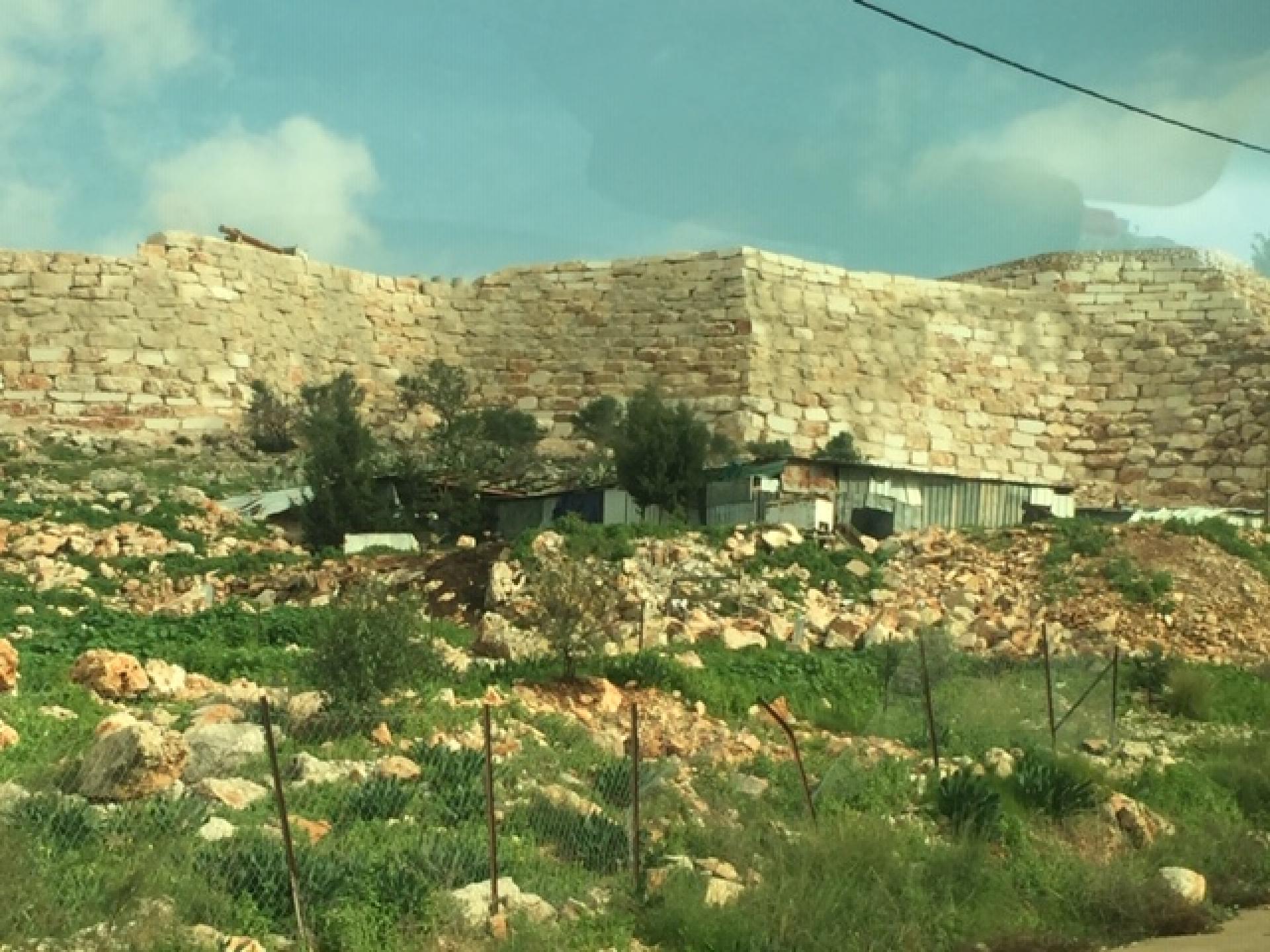 The wall was built on the olive trees
Photo:
Pitzi S

Their lands beyond the fence stretch to Rosh Ha’ayin.  Even though they’re registered in the tabu in their names, and they have all the required documents, they see others arriving at their groves and picking the fruit.  About a year and a half ago one of our colleagues wrote in her report, “They’re building for the settlers while bringing destruction to the Palestinians,” a brief but accurate summary of the situation.

Rubble from the surrounding settlements was dumped on their olive trees, burying them.  Then a wall was built to prevent the earth from sliding.  The wall abuts the village’s buildings.  Above it sits the Leshem settlement.  200 olive trees are buried beneath it.

First they stole land from Palestinians, then they built on land that didn’t belong to them, afterwards they dumped trash and destroyed an olive grove and finally they constructed a wall so they wouldn’t have to see their neighbors who own the land.

The surrounding settlements include Fadu’el, Alei Zahav, Bruchin, and four years ago Leshem completed the contiguous chain from the coastal plain to Ariel and then to Tapuach, Ma’aleh Ephraim and the Jordan Valley.

A clear and definite straight line cutting up the West Bank.

When residents try to pave roads inside the village the IDF arrives and confiscates the tractor and charges them “warehousing/security” fees.  T. reports that most of the time soldiers with dogs are present next to his home.  They address Palestinians disrespectfully, sometimes cursing.  The residents are afraid to complain about the soldiers’ behavior because some have built without permits.  His home and ten others and a mosque are located 2 km. from the village center.  These are old buildings, constructed 70 years ago.  When construction of the Leshem settlement began they received stop-work orders.  But families grew and needed more room and expanded the homes without permits.  Now the homeowners are afraid of demolition orders.  They ask who can help them.  We promised to inquire.

Deir Balut has 5000 inhabitants, 1000 pupils, four schools.  Young people can’t make a living.  They can’t find jobs, can’t save to build a house, can’t marry.  Bachelors can’t receive Israeli work permits and there is hardly any work in the villages.  T. concludes that when people have nothing to do, when they sit at home with no work, they do stupid things.  They take drugs, throw stones at soldiers, go wild, and parents are helpless.  If they had work they’d start families, put their family’s welfare first.  If only…

During the last olive harvest settlers from Fadu’el threw rocks at the harvesters and interfered with the picking.  It’s been like that for the past five years.  They didn’t know exactly about permits, but estimated that half the residents hadn’t received responses from the Israeli DCL. 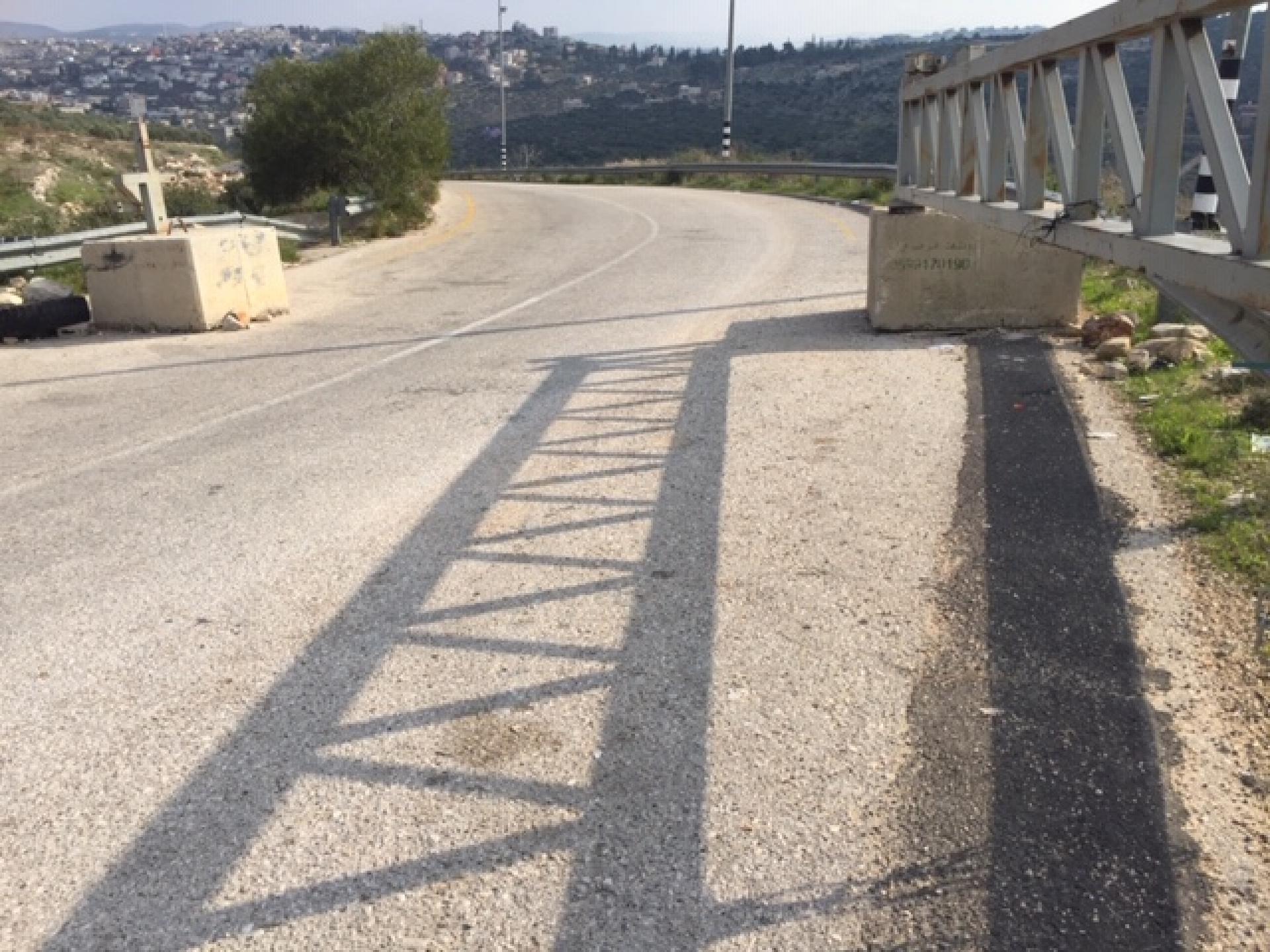 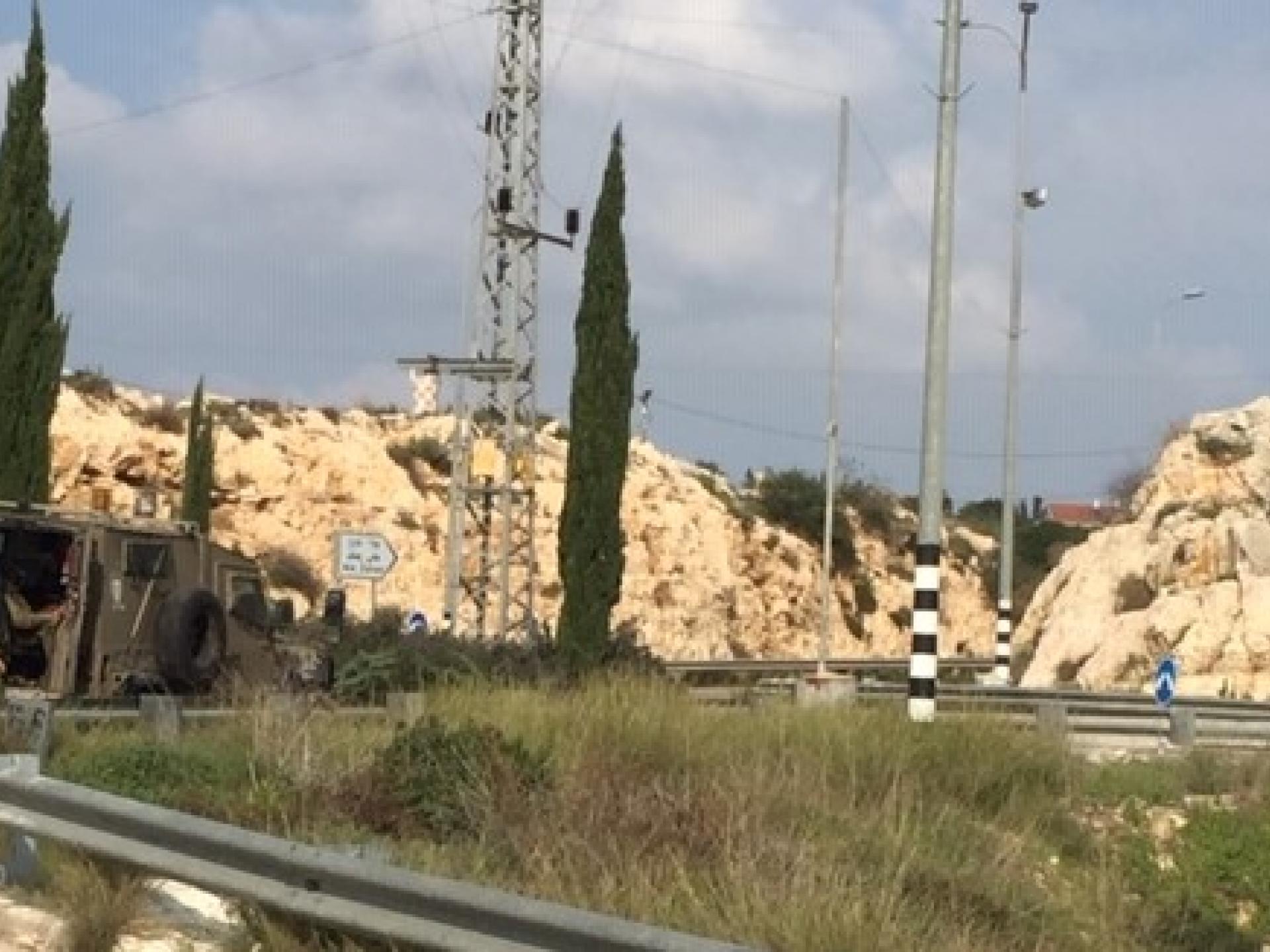 An army vehicle at the exit from the village
Photo:
Pitzi S

A tree 200 years old stands in the village center.

The municipal engineer agrees to meet with us.  He speaks a little English, but doesn’t have any information about topics we’re interested in.  He says soldiers often block the entrance to the village and force residents to make a long detour.

Villagers own 15,000 dunams, 10,000 of them in Area C.  Two-thirds of the village houses are in Area B and one-third in Area C.  The settlements of Alei Zahav and Bruchin sit on their land.  What happened during the last olive harvest?  Sometimes they were allowed to work, sometimes not.

Two people who had an appointment with the engineer join us.  We rise to leave.  We’d shown up without an appointment.  H. stops us, pleased to meet members of Machsom Watch.  Eight years ago he’d made a film with Dalia G.

We had a meeting at the municipality with two council members and a teacher from the boys school.

Villagers haven’t been allowed to access their olive groves all year.  Only 7-10 days were allowed for the harvest.  One of them has 50 dunums in the Bruchin settlement and he isn’t allowed to access the land all year to work it, prune trees and clear weeds.  Owners of flocks of sheep and goats are afraid of the settlers who harass and chase them away with cudgels and rocks.

A surveyor arrived recently to measure the land but the soldiers didn’t allow him to work.

They don’t receive building permits, and when they build without a permit the bulldozers come and demolish the construction.  They don’t bother reporting confrontations with the settlers to the DCL because it’s clear to them that the soldiers always take the settlers’ side.

A few people received permits to access their land and immediately afterwards were notified by the Civil Administration, from the department in charge of government property, that they must leave.  They’re forbidden to work their land.

Settlers enter Brukin at night and throw rocks.  For no reason.  A hobby of theirs.

The sewage problem we reported in the past still hasn’t been solved.  Sewage from Ariel and Barkan still flows toward Brukin.

When they receive demolition orders they have no choice but to contact Israeli lawyers who charge high fees but often don’t succeed.  Their appeals are rejected.  The expenses are great. 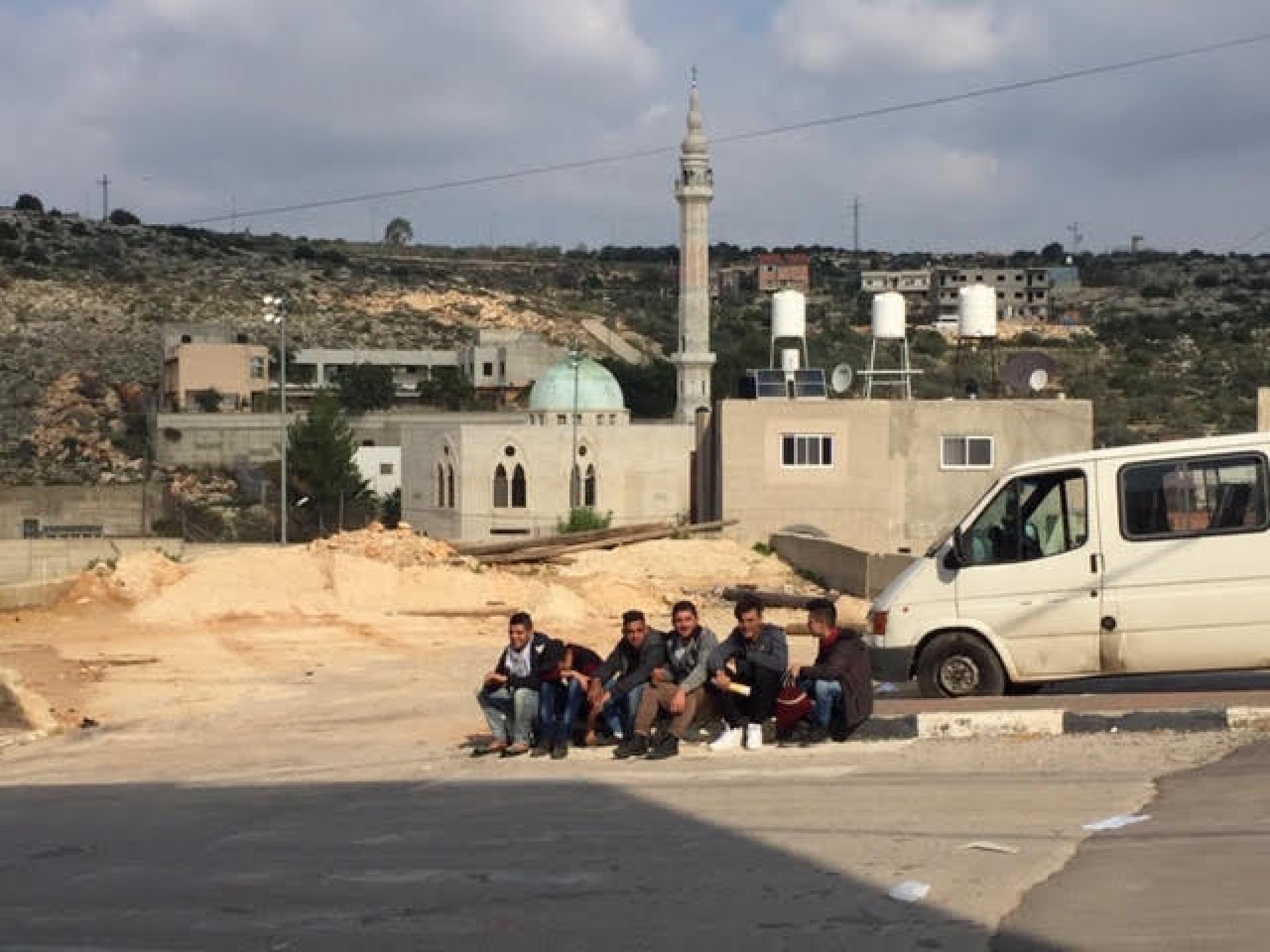 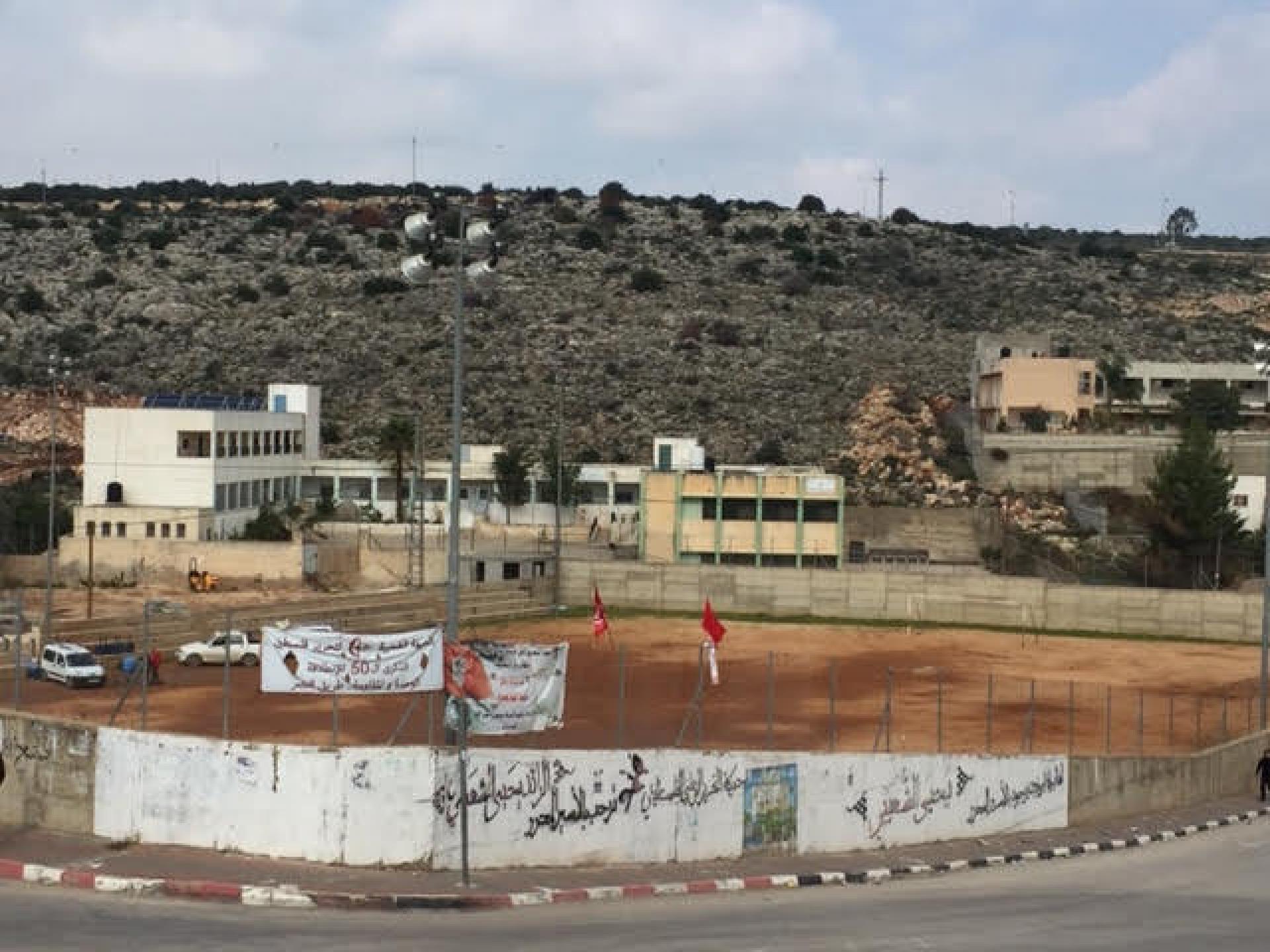 The principal says that many of those who finish high school continue to study at one of the universities on the West Bank but when they return to the village there’s no work for them.  It’s a familiar story.  And a sad one.

Brookin is a village of about 4,000 residents in Salfit County.

600 dunams of the village's land were expropriated in 1984 for the establishment of the Barkan industrial zone. Small sewage treatment plant This area is regularly flooded. The sewage flows into Baruchin and pollutes the streets of the village. In 1999, the Baruchin settlement was established.
The barrier of separation and harassment Settlers keep the villagers away from 30% of their lands (about 4,000 dunams). About half of the village lands are in Area C, on which Israel prevents construction.