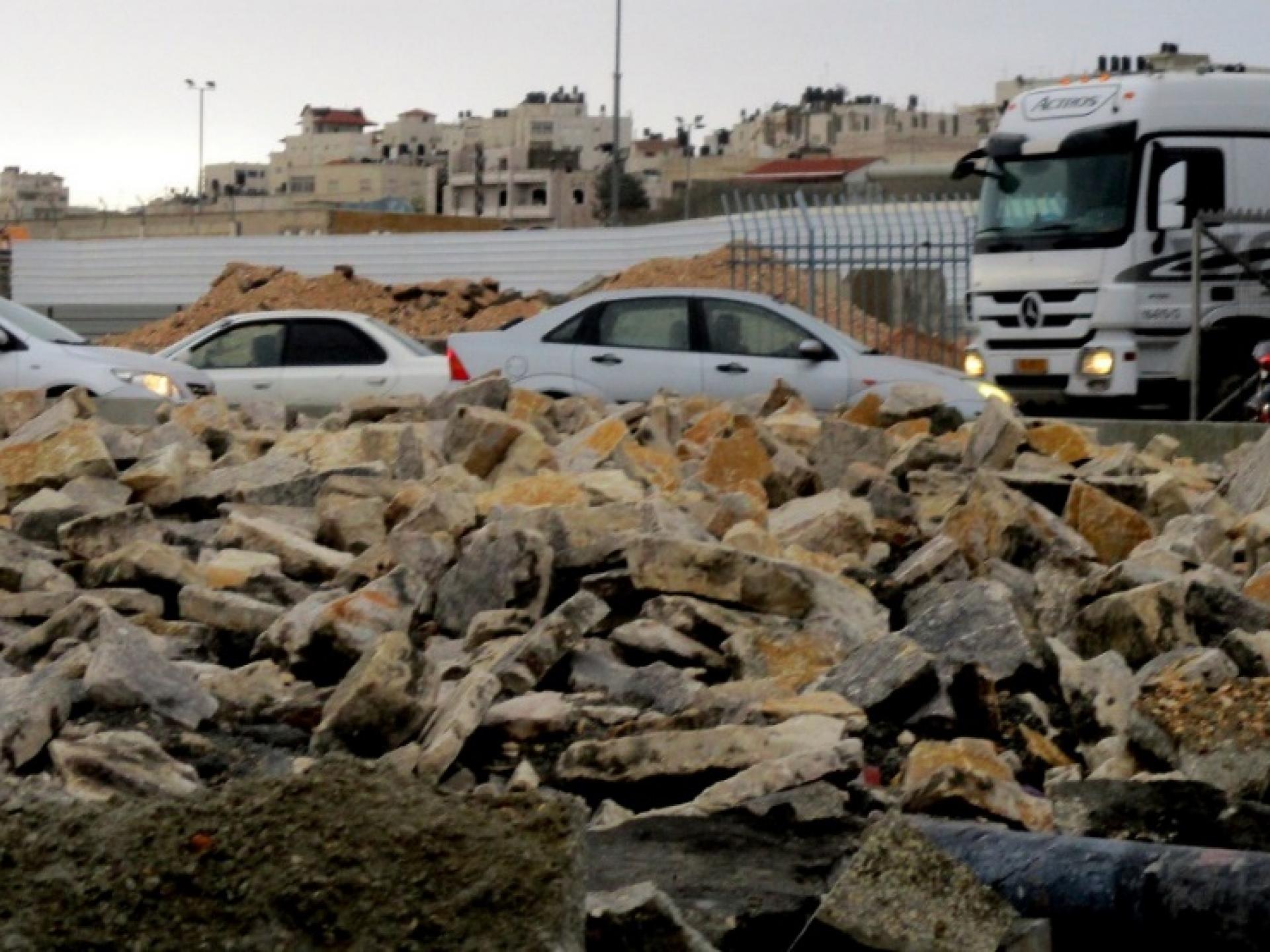 Until just a few months ago, the square/roundabout between Qalandiya refugee camp and the checkpoint was a vibrant place where thousands of people passed through every day.
Children and youths ran about offering their wares to the passersby, media teams stationed themselves here to document Occupation horrors, demonstrators’ processions arrived here and were “greeted” by Israeli soldiers with concussion grenades and teargas canisters – in short, a lively place.

Beyond the site, behind the row of cars (see photo), the place where now a huge pile of sand rises was once a large car park, for Palestinian vehicles. That’s where I used to park, too.

A few months ago, works and demolitions began.

They call it renovations. No more space, no more car park.

Rumor has it that these renovations will last a year and a half, others speculate two years.

And what happens in the meantime?

Chaos. The rubble and broken stones are reminiscent of a city after an air raid. 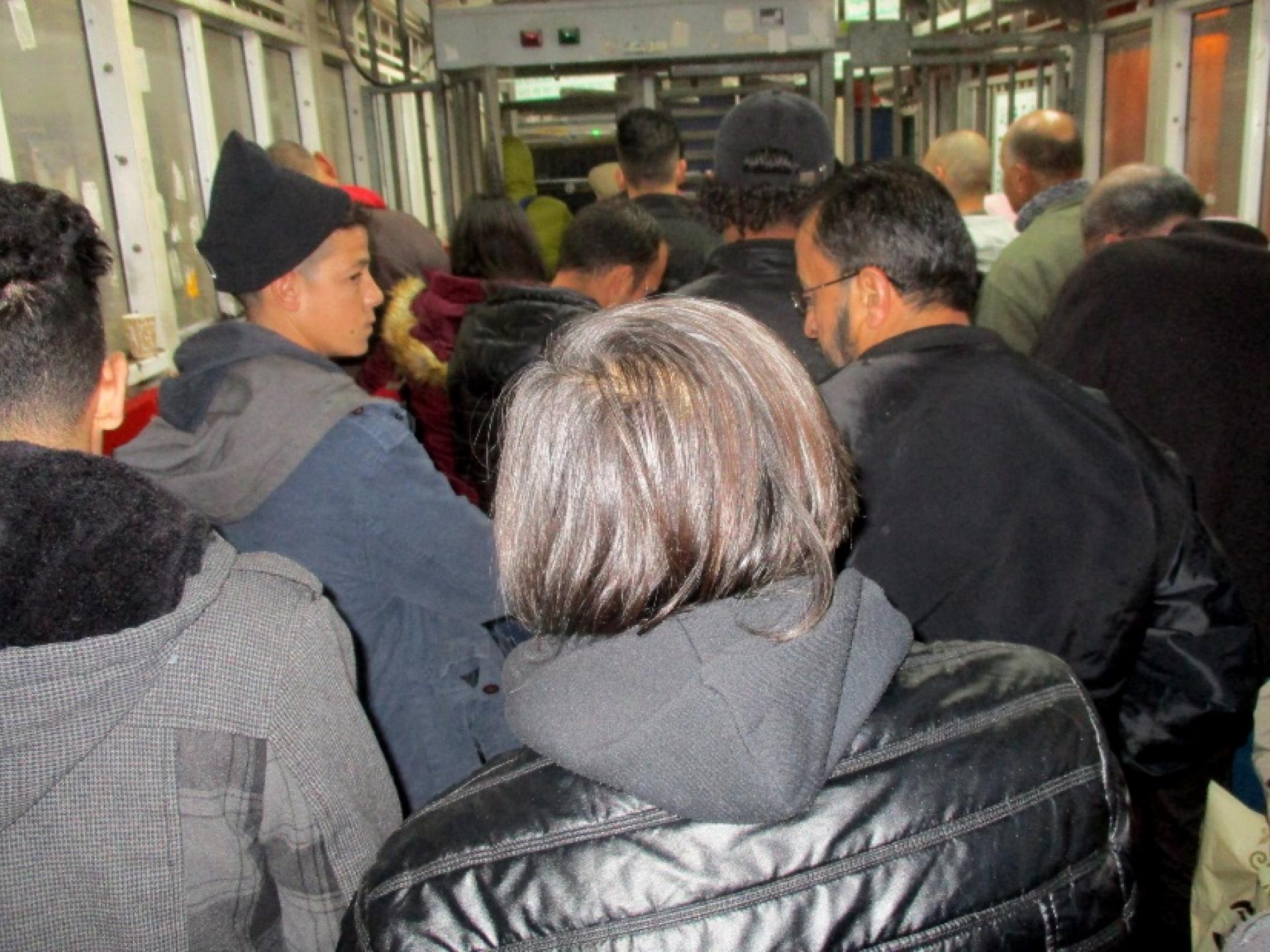 Although the afternoon is not characterized by heavy traffic at the checkpoint, travelling time from the Palestinian over to the Jerusalem side was long.

I don’t count heads, but there were many of them. Many people in front, and many in back. Suffice it that one young man begins to argue with the woman-soldier as to the validity of his permit, and then everything stands still.

Dahiyat Al Barid (Arabic for “Mail Neighborhood”) used to be a part of the town A-Ram. As Israel would have it, with as much land as possible with as few inhabitants as possible, this neighborhood was annexed to Israel, and A-Ram was separated from Jerusalem that had been the hub of its inhabitants’ lives.

The wall surrounding A-Ram has been opened with an army metal gate. Several months ago this gate became an entry checkpoint to the West Bank (only one way) in order to lighten some of the traffic traveling through Qalandiya.

But there’s a rub: according to Palestinians, children from A-Ram occasionally throw stones at soldiers manning this checkpoint (only from within, never from outside), and then the checkpoint closes, the soldiers disappear until the next day, and hundreds of vehicles arriving at the closed checkpoint at the end of a workday in East Jerusalem on their way home to the West Bank must make a U-turn and drive to Qalandiya Checkpoint. As a result, lines of cars stretch all the way to the horizon.

The sun already set as I came to A-Ram to hear firsthand at whose behest and in the name of what kind of logic the soldiers perform this act of collective punishment.

The officiating commander agreed that yes, when there are ‘riots’, they close the gate in order to keep the soldiers safe. He added that according to a new instruction, if and when such ‘riots’ occur again, the soldiers will summon Palestinian Authority policemen who will deal with the stone-throwers.

So now the Palestinians will not only be Israel’s obedient subject, not just collaborate – now they will hold back the stone-throwing hands, in the best tradition of ‘divide and rule’.

The officer added how hard such a shift is on his soldiers, standing for 12 hours a day wearing a ceramic bullet-proof vest that weighs 4 kilos in front and 4 kilos in back. After having checked and found out that vehicles are sparse in the morning and more crowded in the afternoon-evening, they decided to return to the original activity hours, so that the checkpoint will now be opened at 1 p.m. and closed at 7 p.m.