Not a regular day of keeping watch at the checkpoints in the occupied territories. We listened to people in their homes, at a restaurant and in the street.

Following the days at the sea we received invitations to visit the villages where the groups had come from. Some of the invitations were to say thank you, others expressed the wish to keep in contact and maybe also to tell a story, and out of curiosity both sides were probably interested in meeting again.

Since I don't read all the reports I was surprised to realize that the old way where we used to drive to Beit Furik was blocked from the Itamar area, and therefore in order to reach Beit Furik we had to enter Nablus and turn right.

A Palestinian man, an old acquaintance from Imatin, offered to drive us there, and so we were lucky to get a five star tour, listening to stories about the lives of the Palestinnians and entering places we probably wouldn't have been able to visit on our own.

This year, a group of people from Beit Furik had come with us to the sea. The leader of the group was a young widow who raises her three little daughters. To her invitation she had added a request to help her find a way to support her children on her own. The Palestinian society has no welfare system enabling families in need to make a basic living. Such families might have to beg if their relatives do not help out, actually also a kind of begging.

We were quite apprehensive about this visit, since we knew we wouldn't be able to offer what she was asking for but even though, we decided to make the visit and to talk to her.

It was a day full of surprises. We didn't know what to expect but set out ready for whatever might happen. The first surprise occurred at the entrance on the main road to Beit Furik. It wasn't my first visit to Bet Furik but evidently, like a horse, I hadn't been looking right or left. This time I realized that on both sides of the road there were palaces just as grand as the ones in Walt Disney's stories or Hollywood movies, and next to them were very simple houses. The well known explanation is that the tenants or the owners live in the gulf emirates and that the houses are actually empty. We are told that both very wealthy people and very poor people live in the village. Nobody is in the middle. There are those who want to show their wealth and those who want to talk about their struggle. And they all live together. And like in all small places they all know each other. Social rules are very strict. You wouldn't want anybody to give you an evil eye.

Each time, when trying to cross the line from the political issues and writing about the evils of the occupation to an attempt to understand from the inside the workings of the Palestinian society, the economic issues are brought to attention and we find ourselves in the impossible situation of being expected to have the means to help out.  We explained that our organization has no financial backing. We are a women's organization opposing the occupation and interested in meeting people and learning from them as much as we can. But beyond that we cannot do much. Both sides felt frustrated but after having made things clear, the topic was changed…how not..to the status of women in the Palestinian society. Things didn't get easier. Two young and intelligent sisters with a craving for an independent life told us about how they were met by derision.

What can a Palestinian woman do in her village? Let's assume that she wants to go for a walk, can she do it? No, people will start talking at once. She wants to open a beauty parlor at home to achieve financial independence. Great! But can she? Where will she get the money from? Will she get a loan? Will she be able to pay back?

That's what our friend from the village decided to do. She had already prepared two rooms with beautiful furniture and equipment bought with checks without cover. She already owed money and was begging wherever she could for help. And so we learnt about the existence of a charity system administered by the mosques.  When somebody is in need of welfare a kind of middleman turns to a person with means asking him to finance one of the children in the needy family. That's how, at best, a number of people having the means finance the children, but without any written agreements. It seems that this is a social-financial solution, but we didn't understand what price the families, or in this case the woman, might have to pay.

Quite often while visiting, I don't understand how this world works. How do people without a steady income support their families?

Later on, we went to the village center where her father invited us to taste the falafel he quietly makes in his little "restaurant". We understood that he wasn't able to help his daughter out and neither could her late husband's parents be of any help. We wanted to pay for the falafel. No, absolutely not. You're guests. It's insulting.

An army or settlement (it looks like a continuation of Itamar or Givot Olam) watchtower on top of the mountain is looking at us standing in the village center. Our hosts told us that more than a year had passed since the last murder on the road, of a couple of settlers from Elon More, and that now no soldiers or settlers are entering the village. It's rather quiet at present, they said. Children are not throwing stones, but even though, every now and then the barrier is closed and soldiers check us. The big problem is the wild boars that destroy the crops. The story about settlers unloading trucks with wild boars is told over and over again. If it's really true, why is it silenced?

Then Nadil (our tour guide) took us to Nablus. We arrived through the trade and industrial areas and the dusty horse market driving  on to the main street along the wadi which divides the town between Mount Eival and Mount Grizim. We passed by the Askar refugee camp and Balata. We saw the narrow entrances and listened to the well known stories about poverty and crowding. We saw the cars trying to get in while we were driving westward. The surroundings looked better off the further west we got…we passed the big market and reached a neighborhood called "Refidiya", like the hospital, a quite modern neighborhood  with restaurants, a luxurious hotel where we sat in a restaurant on the 6th floor from where you have a view overlooking  almost the whole town. We were introduced to the owner who needed trading permits for his wife and himself and another man who knows Sylvia. The place wasn't crowded. Most of the guests were women who were enjoying a good meal, a nargila and the good life.

From there we drove to Sara, a place known to us from the days long gone in Beit Iba. It was a short drive.

At the edge of the town we passed by a neighborhood with villas under construction, like in the kibbutzim…and on the side of the road a restaurant , where we would have liked to stop, with a view towards the checkpoint at Beit Iba near Qusin, also a town we know well. We arrived at Imatin.  There too, we saw new houses being built on the fields outside the village. We were not sure if in are B or C. Nadlil told us that it is a quiet village not looking for trouble. He wished us goodbye. He really is a very special person. He gave Amira a birthday party she hadn't dreamed of today. Mazal Tov. 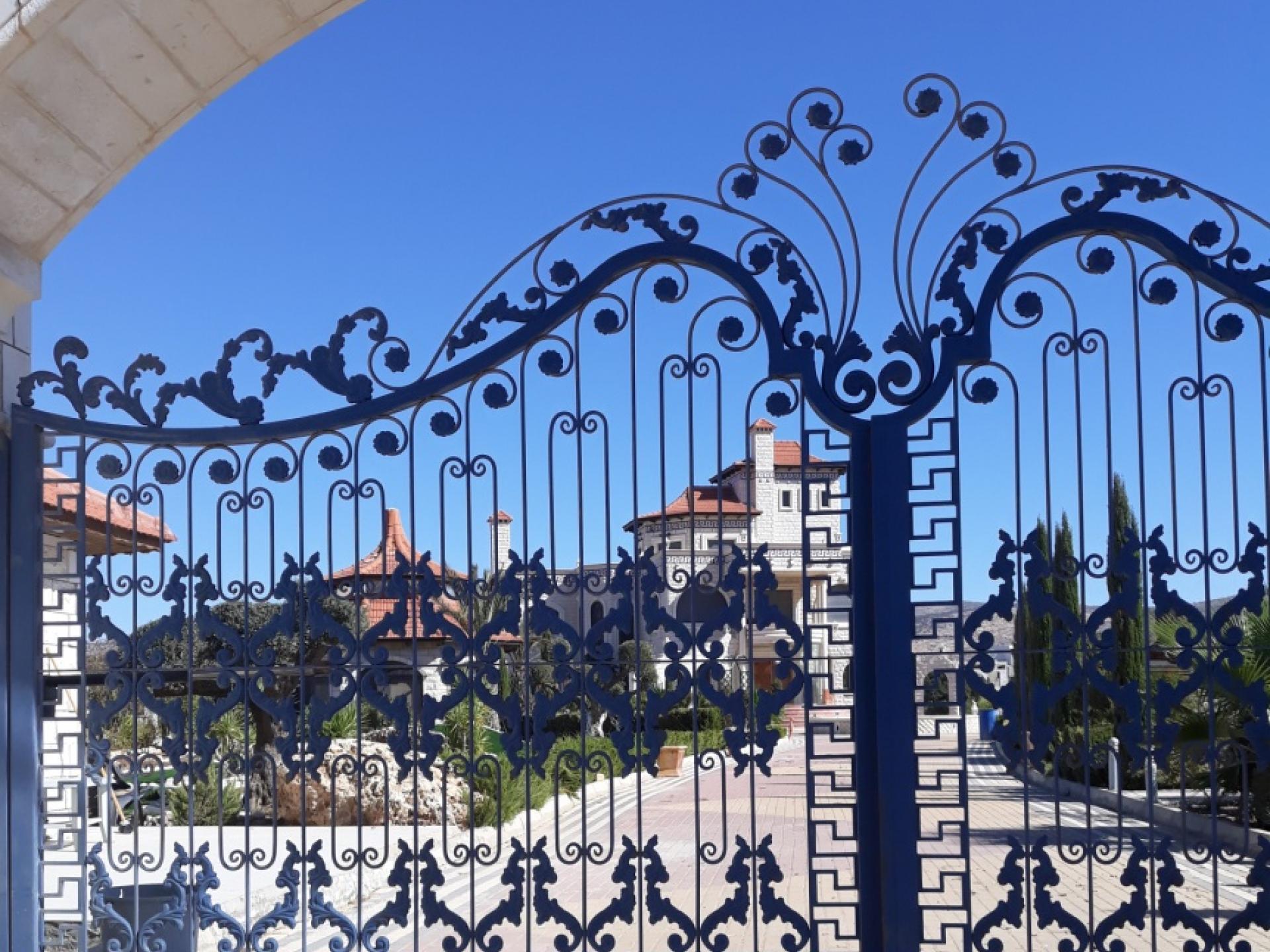 One of the palaces in Beit Furik
Photo:
Amira Ityel 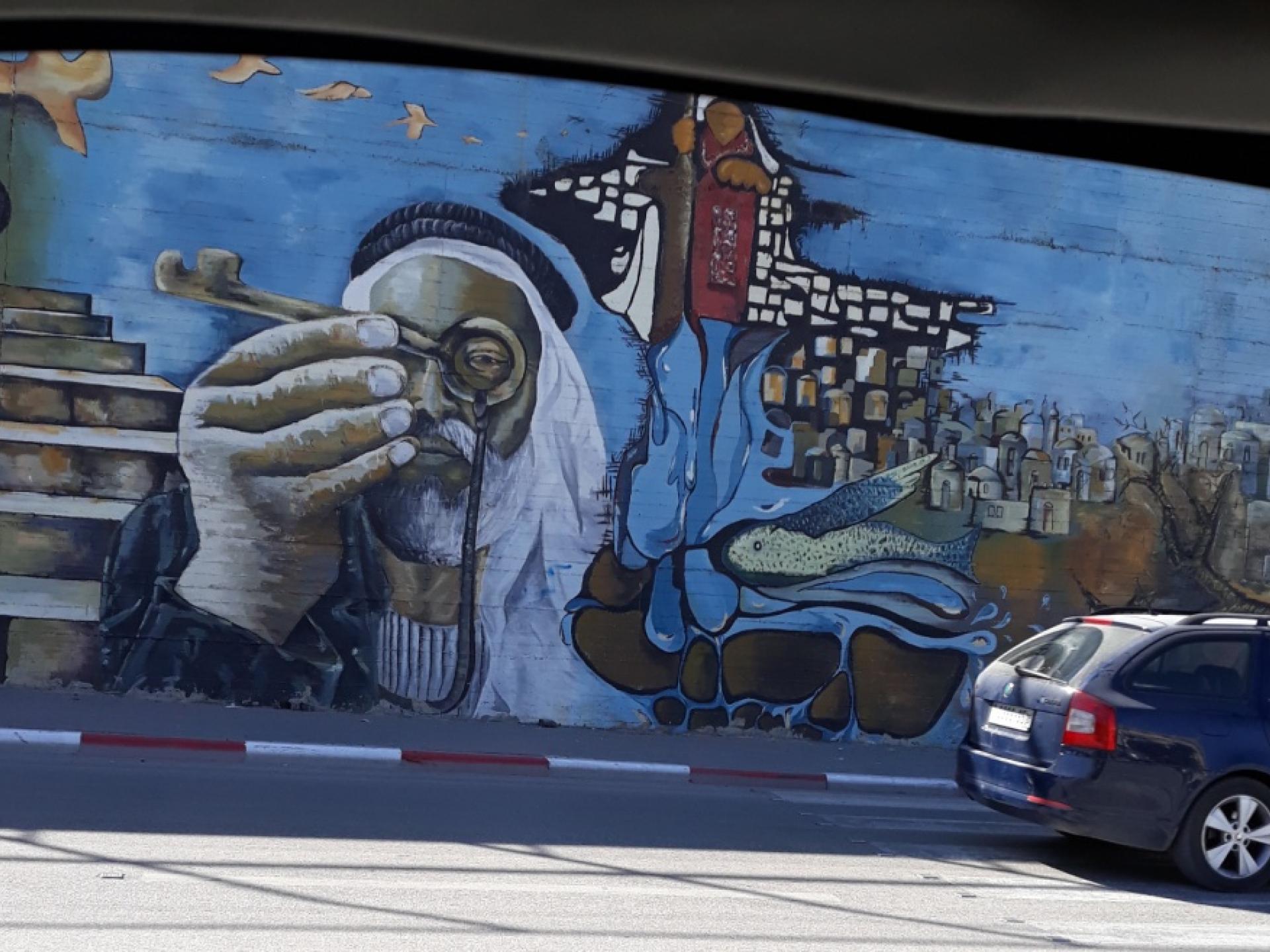 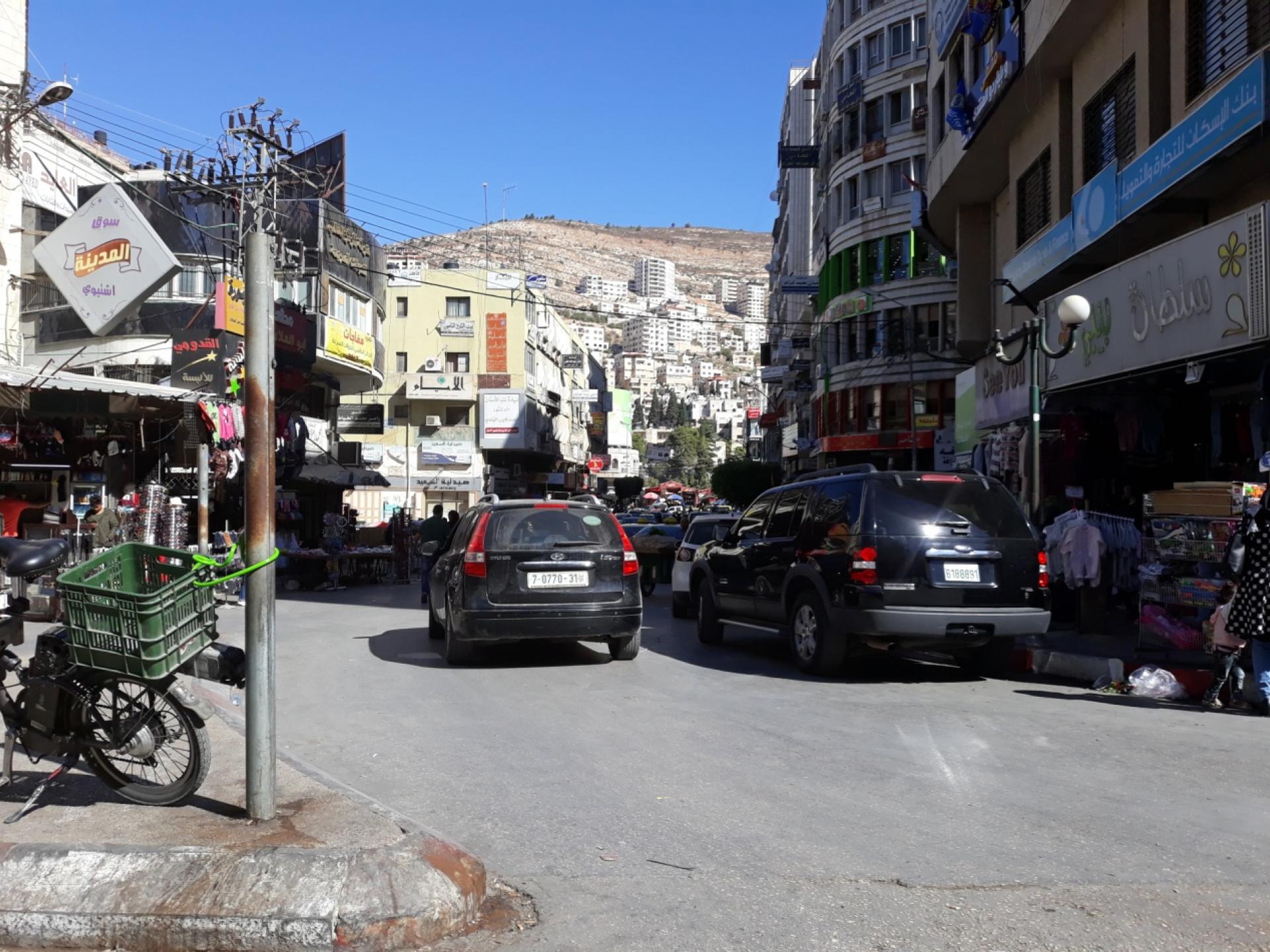 Far'ata - This village lies in the West Bank, 19 kilometers southwest of Nablus city and 23 kilometers east of the city of Qalqiliya. Its inhabitants' number 799, all members of four families from the neighboring village of Imatin. Far’ata is identified with the Biblical Far’atoun, and an archeological survey has identified findings on a timeline from the Second Iron Age until the days of the Ottoman Empire.

After the Oslo Accords, the built-up area of the village was categorized as Area B, but 80% of its farmlands were classified as Area C.

In 2002, settlers founded the outpost of Havat Gil’ad, which they claim is located on privately-owned land purchased by the Zar family. The Palestinians claim they own the land. The Civil Administration has issued demolition orders for all the structures in this outpost and they were declared illegal, but nothing was done about it. On February 4, 2018, the Israeli government unanimously ruled to regulate this outpost by defining it as a new settlement or by erecting a new settlement next to it.

Beginning in 2012, the Palestinian Authority ruled to include Far’ata in the local council of Imatin, a larger community.