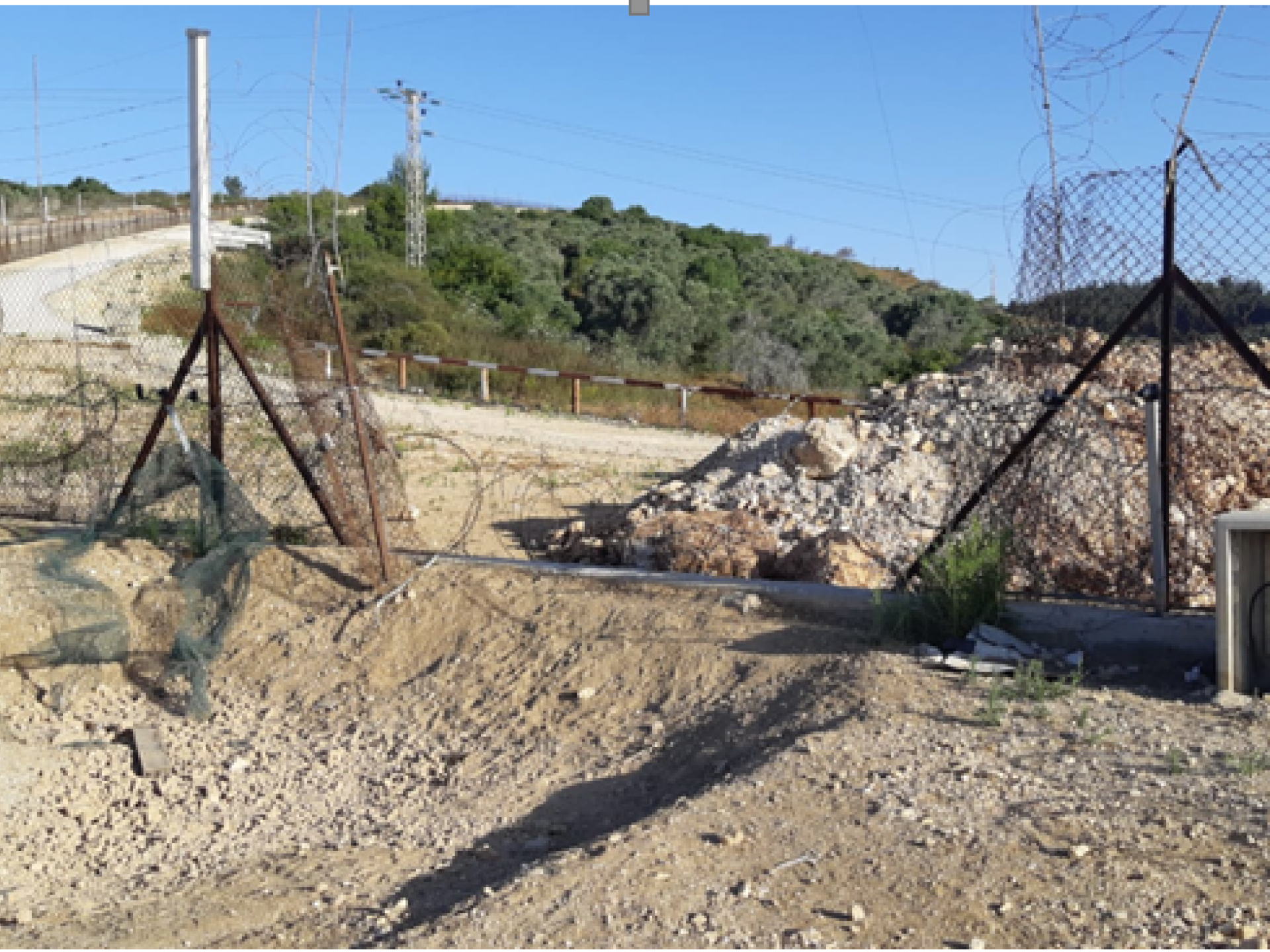 Photographer:
Shuli Bar
This is one of the many gaps that have opened up in the separation fence from the north of the West Bank to the south. Until a week ago not only pedestrians but also a tractor could pass through it. 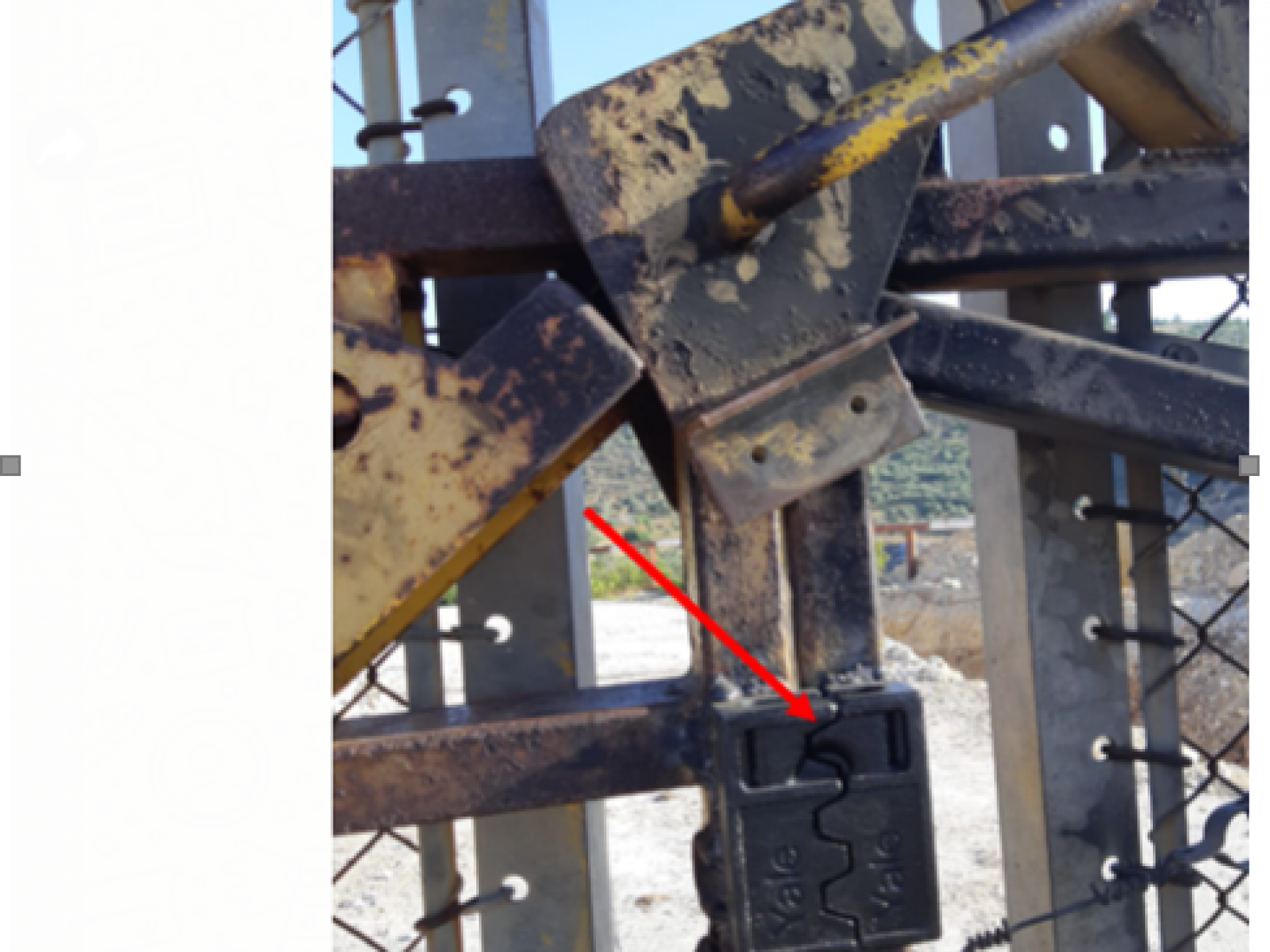 Main gate at the Anin checkpoint

Photographer:
Shuli Bar
Today the soldiers did not open the checkpoint gate. They arrived without a key

On road 65, Wadi Ara, there were policemen near the junction with the road ascending to Katzir and Barta’a. The traffic lights at this junction have been torn out in the latest riots that took place here and not yet fixed. No hurry. So there are traffic jams. Who cares…

We first drove to check the state of the holes in the fence around the East Barta’a junction on road 611 from Harish to Barta’a Checkpoint. During the past year, the number of holes in the fence has been in the hundreds, perhaps more, and people passing them daily unhampered reached tens of thousands. At this junction developed a central station filled with buses, taxi vans, fruit and bric-a-brac stalls, areas of free parking to embark on public transportation to work inside Israel. Someone had, has and will have an interest to keep the passage from the West Bank to Israel flowing and not necessarily through the checkpoints, in spite of the pandemic and the constraints of ongoing security. The Separation Fence has become superfluous and deserted. But lately, rumors have it that the Israeli army is closing the holes or guarding others.

This morning, only few Palestinians were seen galloping from the Palestinian side towards the holes in the fence and the security track alongside it. There were also very few workers waiting along road 611 for their transport to work. Apparently, then, some of the holes in the Separation Fence in this area have indeed been repaired.  In spots further away from the road the holes are open and functioning 24/7. Passage through them entails much walking in rough terrain, but whoever has an urgent need to cross or pass something on – can do it.

The stalls that popped up at the East Barta’a Junction for the benefit of thousands of Palestinians crossing there have disappeared. It is no longer a lucrative business… No customers. And perhaps the Israeli army saw to it. Without the colorful stalls and coffee spots, the place has become dull. People are not eager to speak with us. And perhaps we’re just imagining things.

At 6:45 Toura-Shaked Checkpoint (300) is still empty and closed. On its West Bank side wait people and cars that need to get to their workplaces at the nearby Shahak industrial zone. Who hurries to open it for them? Apparently, not the army. In the Israeli army vocabulary, there is nothing about consideration for Palestinians, certainly not those who are in a hurry to get to work.

At 6:55 the Anin Agricultural Checkpoint (214) is still devoid of soldiers. Some minutes later, a Military Police vehicle passes there, returning from the Tayibe-Roumana Checkpoint (154) near Umm Al Fahm. Later we realized that at these two checkpoints mighty metal locks have been installed lately, and they seem unopenable. Even the soldiers could not manage to open them this morning… They drove all the way to both checkpoints and did not open them. Why? Because they didn’t have the keys!...  Farmers waiting to cross over to their olive groves asked: So, should we come on Monday? Not come on Monday? Who will let us know?

The DCO’s answer to our query: Until the key matter is solved, the checkpoints will not be opened.  Obviously. But when?

Incidentally, these checkpoints are opened only twice a week.

At the same time, adjacent to the main gate at Anin Checkpoint, is a broad hole in the fence. The Israeli army did make sure that tractors could not cross there, but one could, on foot. And people indeed do that. On foot.

So what are the checkpoints there for?

The overall picture in the northern checkpoints today reflects the chaos and anarchy of the army and the total bankruptcy of our state, captive of this military occupation.