The Palestinian Jordan Valley: a bottomless difference between the life conditions of Palestinians and Jews | Machsomwatch
Skip to main content
Back to reports search page

The Palestinian Jordan Valley: a bottomless difference between the life conditions of Palestinians and Jews

Near the entrance to the Palestinian village of Qusra we see 2 new caravans and works on the ground. A query to Dror Etkes informs us that this is not a new outpost but rather works by Mekorot (Israeli water company) laying new piping that will supply water to the growing settler-colony of Migdalim (on the Palestinian lands of Qusra village, of course).

10:50 – Gitit (Maale Efrayim) Checkpoint – 5 soldiers, a policeman and one woman-soldier just descended from the pillbox a few moments ago and closed the checkpoint to Palestinians. They were too lazy to move the plastic barrier that blocks the second lane (meant for Israelis to bypass the Palestinians lined up in their vehicles) so both Palestinians and Israelis were delayed. Equality – finally! Every Palestinian car is inspected for about 5-10 minutes, its passengers disembark, including their luggage, and in some cars the boot and engine are opened and checked.

A long waiting line of cars forms, lots of trucks. We counted 25 cars. Then most of them were let through without inspection and once again inspections began so a waiting line re-formed, and thus time and again. As usual, the policeman and woman-soldier tried to make us leave (get away from the checkpoint… You mustn’t stand on the road… etc.).

We didn’t, but resorted to the roadside.

At 11:20 we left because we had an appointment with Aviva, Anathea and their guests at Makhoul.

We drove up to Umm Zuka and rode to where one gets a good view of the flourishing outpost there. I explained to our guests the various measures the State of Israel takes in order to make the Palestinians give up and leave.

We met Israeli activists who had returned from accompanying Samra shepherds to their grazing ground. They said the day had passed quietly, the Jewish settler-colonists did not harass the Palestinians this time. Nor did the army show up.

Near the army base at Peles, right above the Samra encampment, in the middle of the road and on the slopes descending towards Samra, cattle grazed and we found out it belongs to the Umm Zuka settler-colonist.  Samra villagers told us that a few days ago the cows came into their encampment, roamed around, and defecated inside the encampment itself, until a settler-colonist came on his mini-tractor and collected them.

We came down to Samra and were welcomed in the encampment, where we met Fawzi’s eldest son who is a 1st year medicine student at the Nablus A-Najjah University.

We took leave of the guests and the shepherds who begged us to stay and dine with them. On our way, on the main road, we met a shepherd from En Al Hilwa. He stood there, hoping that someone would give him a ride home. About 14 kilometers away… Pretty surreal, I think, that not a single Palestinian in this area has a car and Jews will not pick up a young Palestinian shepherd. Although this was in the opposite direction for us, we gave him a ride home. He said he and his brothers take the family’s cattle out to graze near Hemdat settler-colony, and he goes to the family tent to get food for them. They spend these horribly cold nights out in the open.

We visited Abu Saker, whom I hadn’t seen for a long time. Not much has changed there. The girls have grown up, his wife has cardiac trouble and has undergone a failed bypass surgery, occasionally passes out in the encampment but works like a young girl. All his sons have left because of the frequent demolitions, and live in Tamoun, up in the West Bank hills. Only he and one young son and his three daughters are still persistently and admirably holding on to their land. He will be 70 in a month’s time… 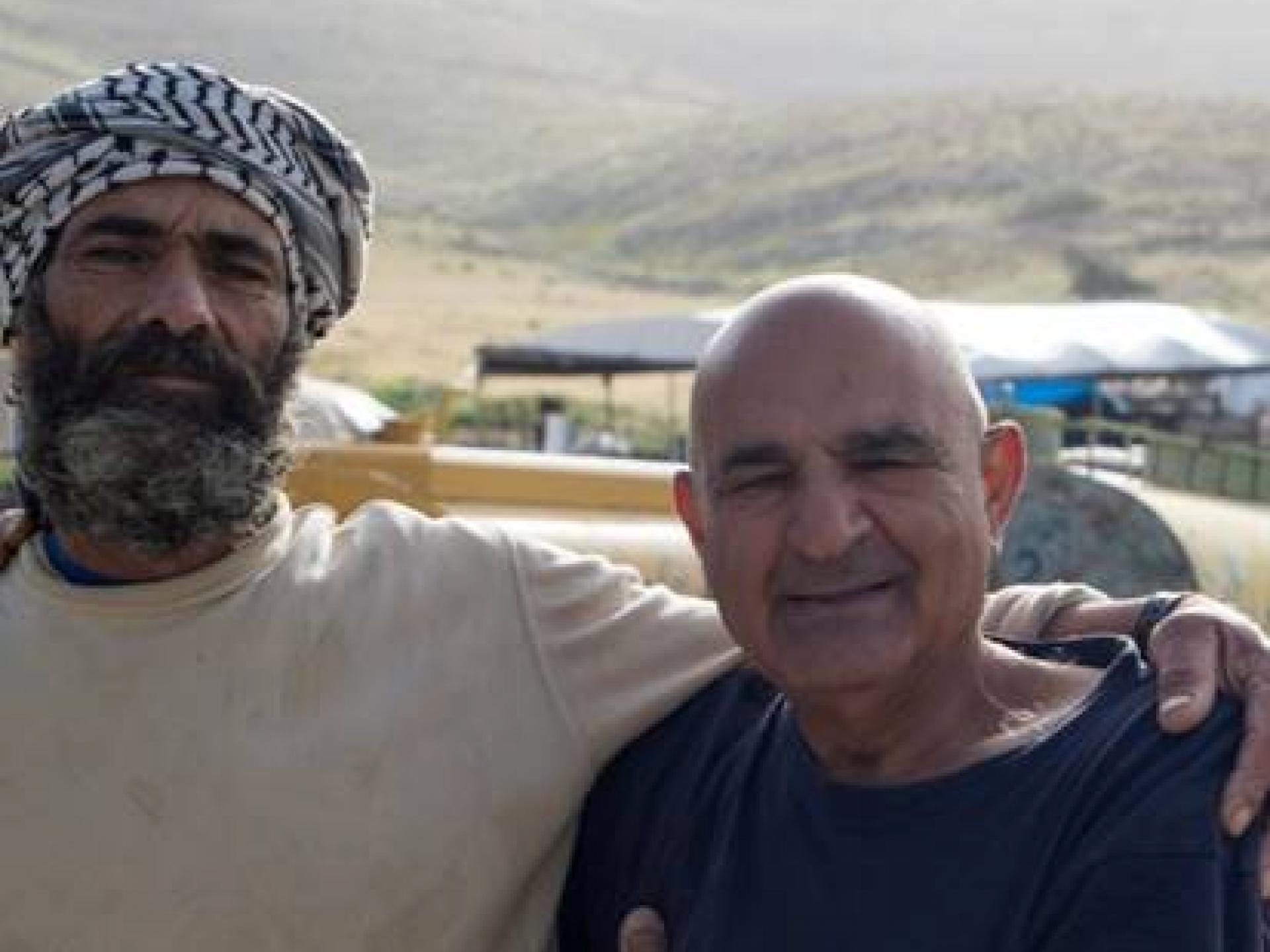