Jordan Valley - The grazing was uneventful, unimpeded by soldiers or settlers | Machsomwatch
Skip to main content
Back to reports search page

Jordan Valley - The grazing was uneventful, unimpeded by soldiers or settlers 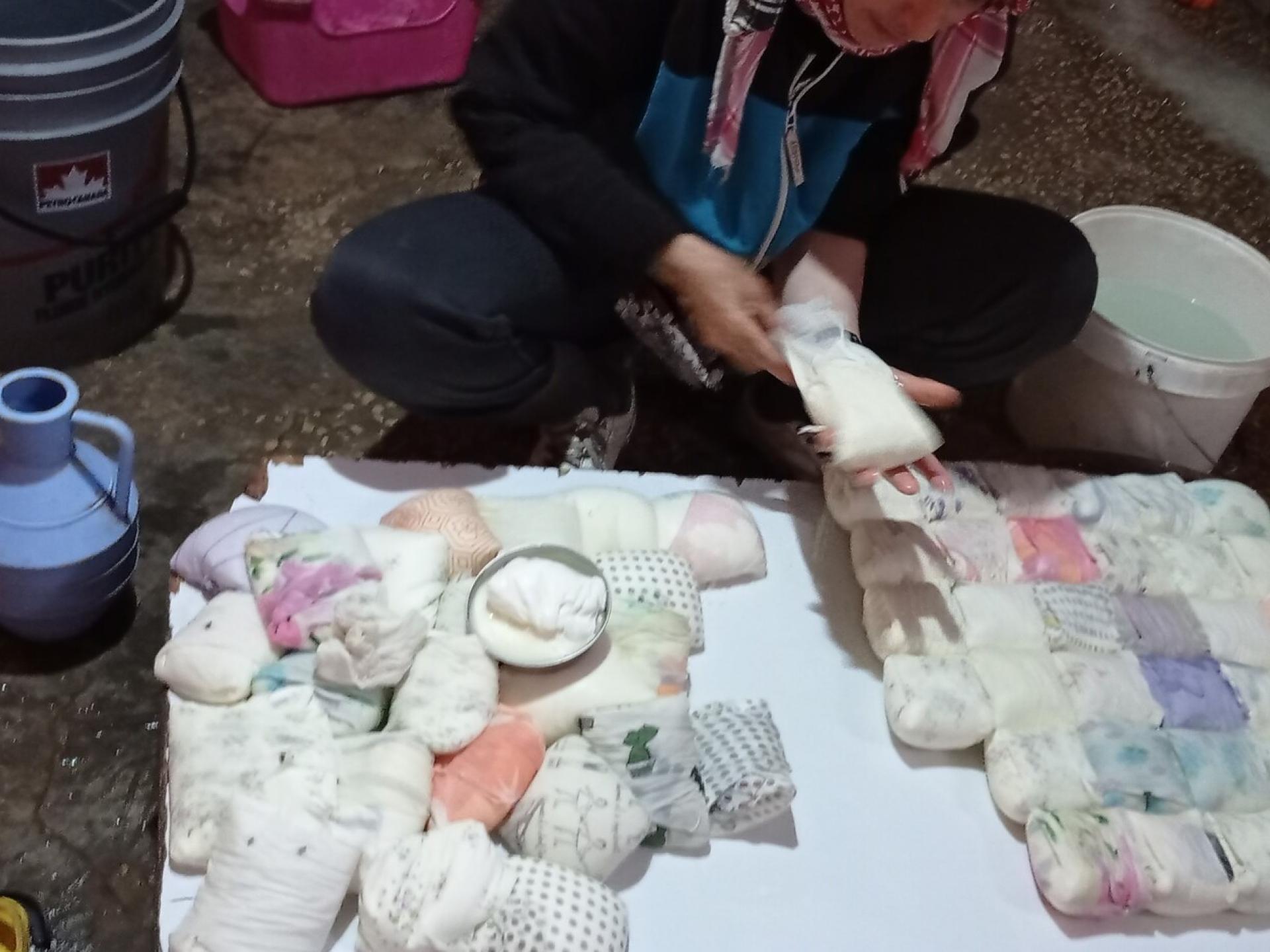 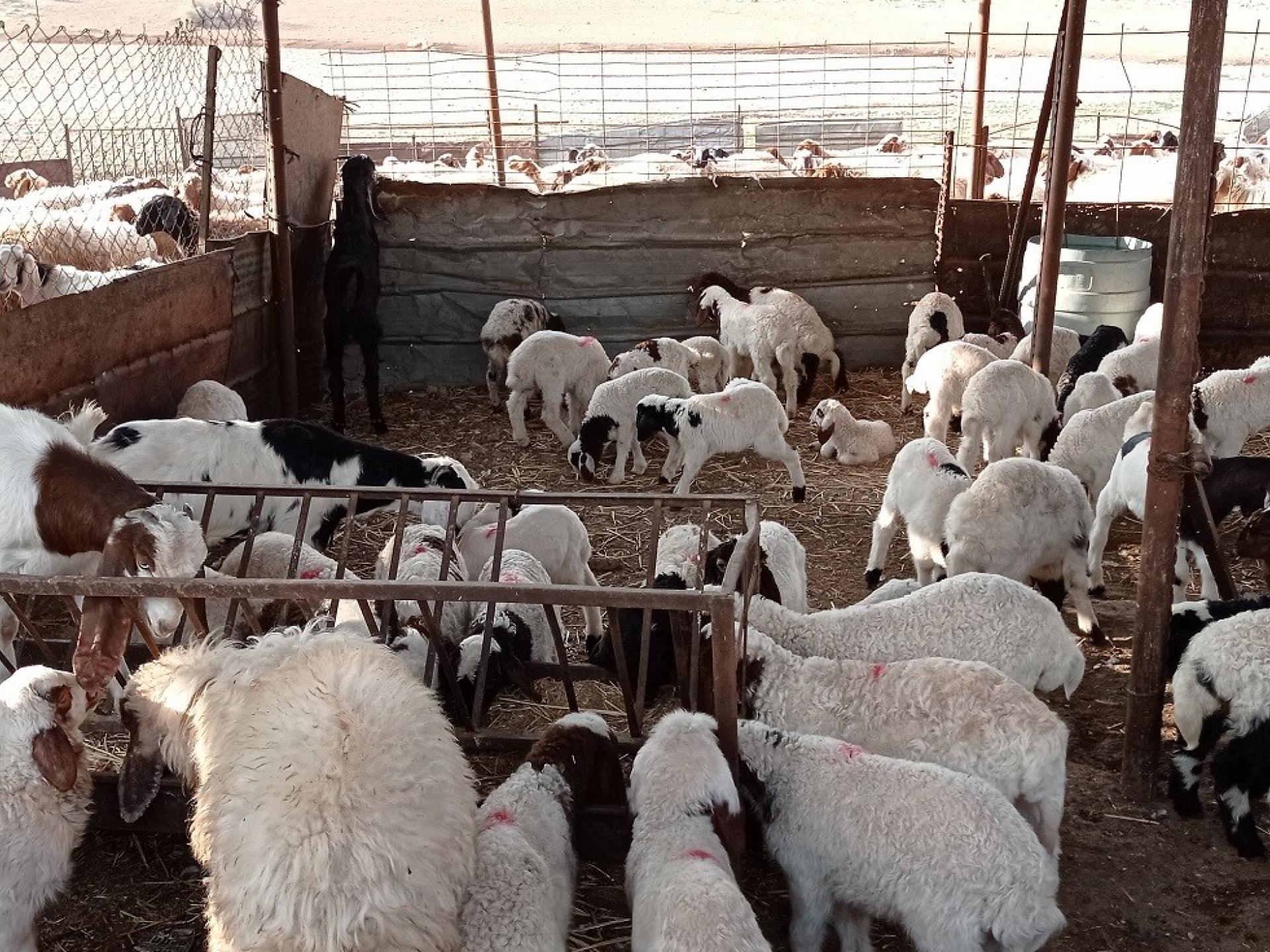 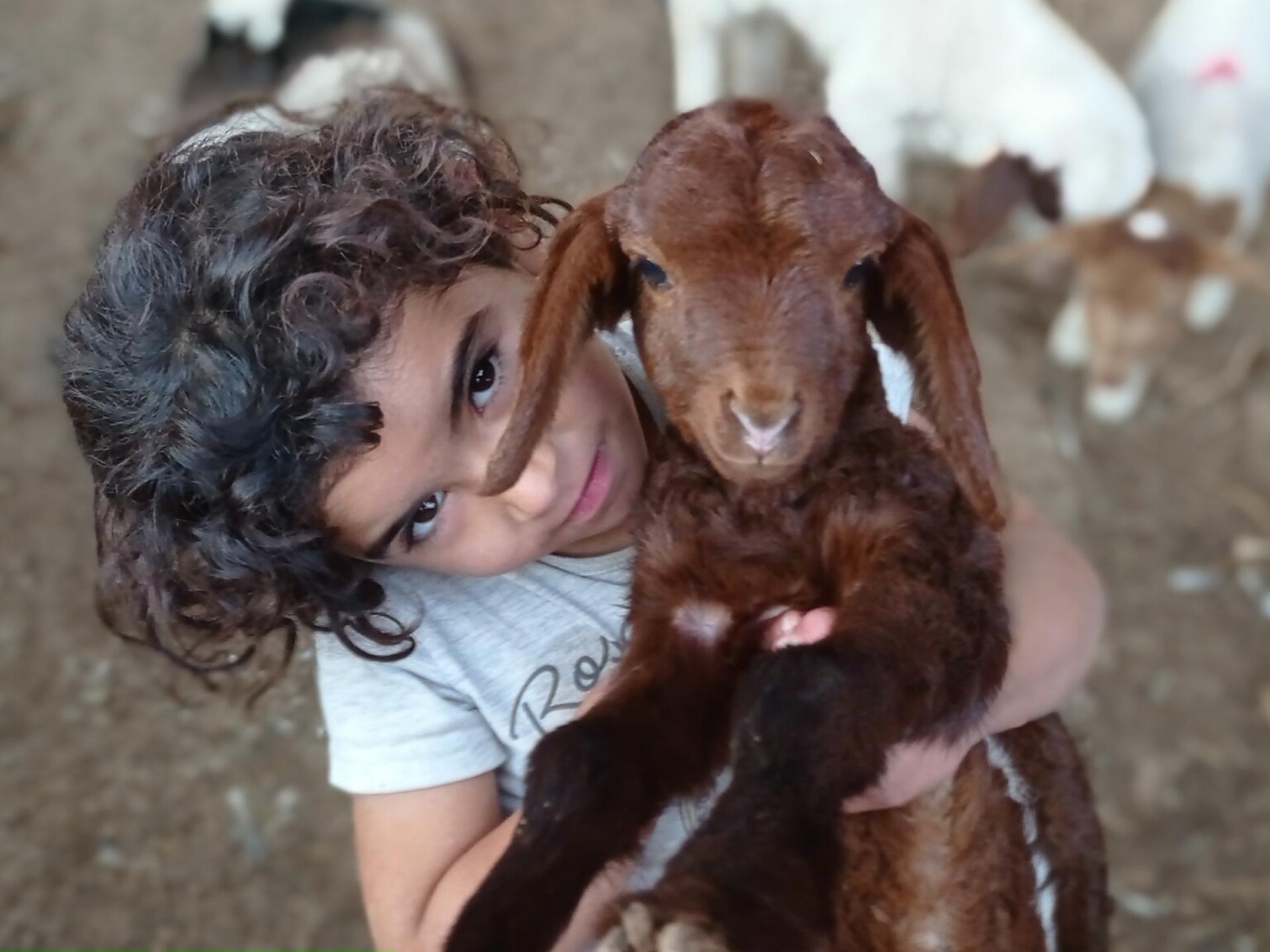 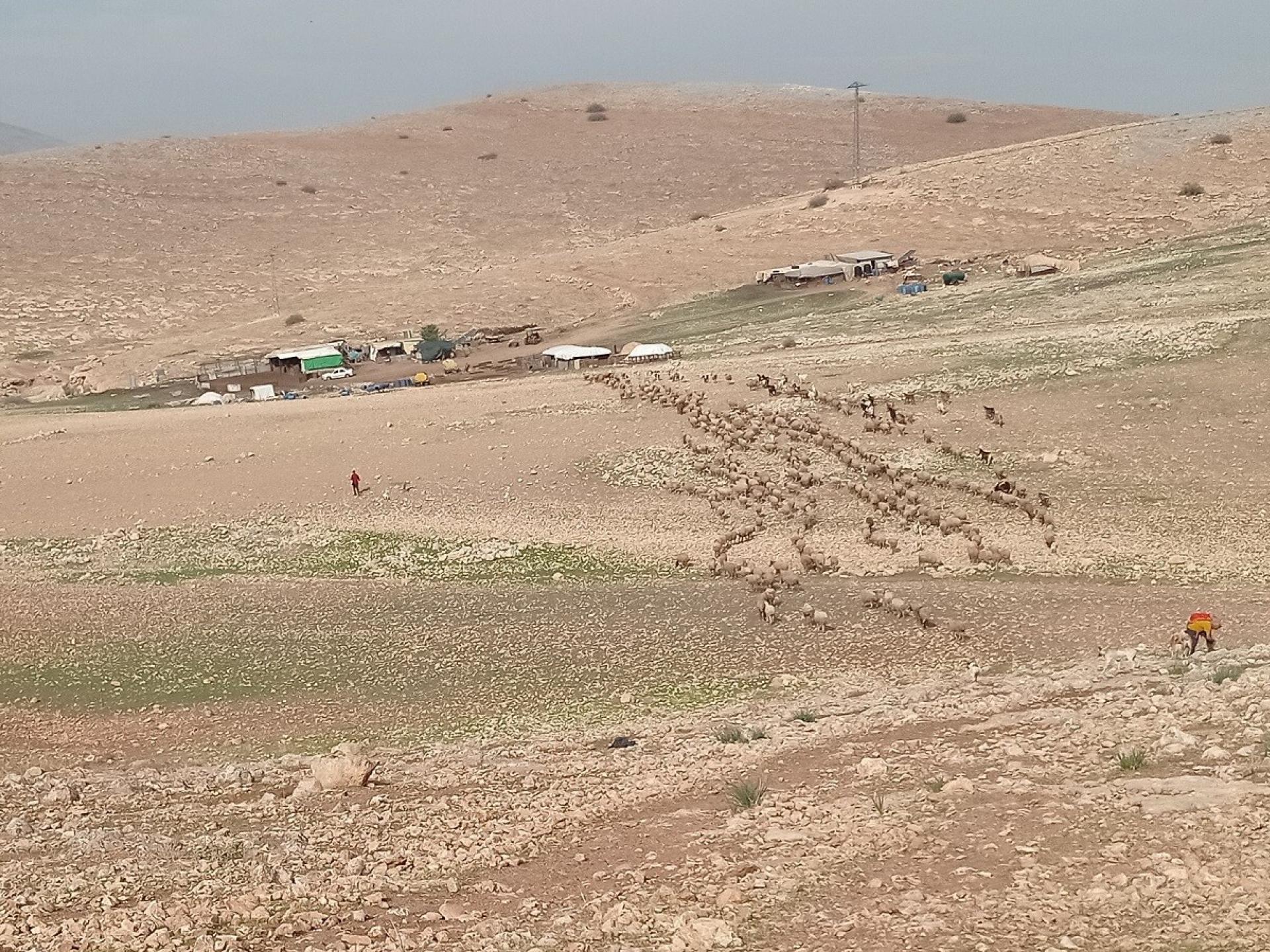 The herd returns to the encampment 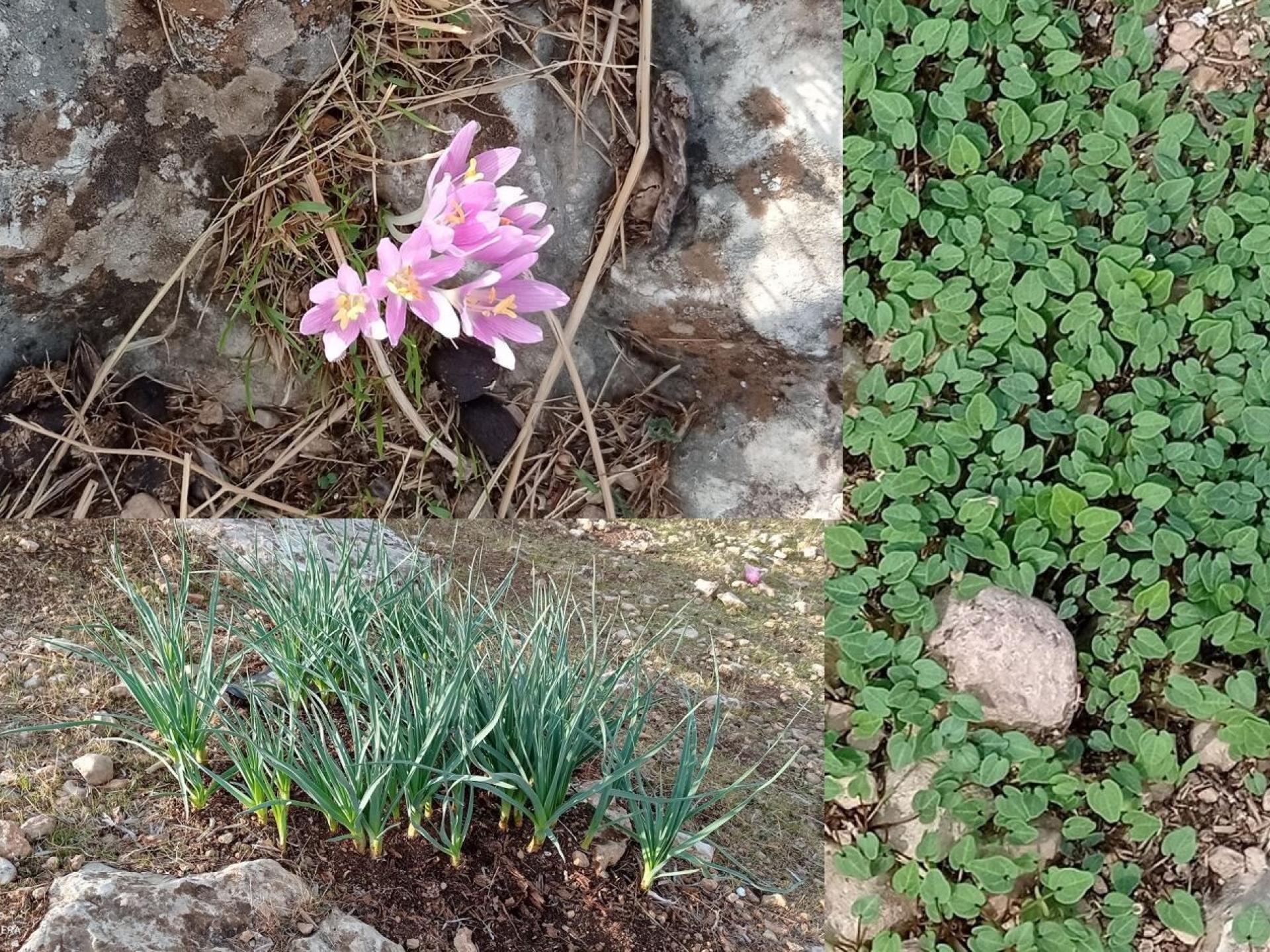 To the right, Mellows sprouts, up crocuses and down Asphodelus leaves

7 AM, final preparations before heading to the grazing area.  In the tent encampment, they’re making cheese.  The next stage is salting and storing it.  Then feeding the lambs and gathering the flock to leave.

Heading out to the south, over a flat area, then hills.  Much of the area is still dry, but there are initial signs of vegetation after the first rains.  Clumps of Asphodelus leaves without the flowering stalk, which will appear later in the rainy season (the new leaves contain a poison protecting them against overgrazing).  A few crocuses add pink highlights.  On the flat, primarily on the path leading to the encampment, a profusion of mallows sprouting.  Later in the rainy season, they’ll reach a height of two meters and form a hedge on each side of the path.

The flock knows the way, the sheep proceeding in columns that merge and diverge.  B., the shepherd, follows behind.  The donkey usually accompanying the flock is absent.  It costs about 900 shekels.  Two of B.’s donkeys recently died and he doesn’t want to risk a third.  He manages without one.  Sometimes the horse he’s raising accompanies the flock, but not today.  A pack of dogs from the encampment escorts us.

The flock veers south and B. calls out to those straying.  They heed his cries.

Along the way, we noticed some paperback books that had apparently been distributed to soldiers and abandoned on the ground.  The title:  “Open the gate to us,” and the sub-title, “Slichot prayers for IDF soldiers.”

B. takes advantage of M.’s presence for medical advice.  One of the flock has a very large, infected goiter, about a liter in volume.  He waited for a month for the viscous liquid to collect and now it’s time to clean it.  B. lays the sheep on the ground and M. holds her hindquarters.  B. punctures the sac and squeezes out huge quantities of viscous, greenish liquid.  Later, back at the encampment, he’ll disinfect the incision with saltwater.

The flock continues moving toward the firing ranges, where soldiers from the nearby military bases hold exercises on the other side of the road on the hills overlooking the base and the firing ranges.  B. says he doesn’t go there without escorts.  Suddenly we hear a volley of shots lasting many minutes.  The volleys were repeated from time to time, breaking the silence.  The noise of the shots didn’t seem to bother the sheep who continued to munch the sparse grass they found there.  The goats comprising a small portion of the flock moved off to chew fresh jujube branches.

We returned to the encampment after about three hours.  The grazing was uneventful, unimpeded by soldiers or settlers.

At the encampment, we joined the family filling sacks with hay.  The flock had been gathered meanwhile in the pen until the work had been completed, while the chickens wandering around enjoyed access to a bountiful portion with no competition.

On our return journey, we left the Alon road toward Itamar and drove up Jabal Ja’dua (the Giv’onim Ridge, also called the Itamar Ridge).  The paved road on which we drove amazed me.  It connects Itamar and the hill outposts (Giv’at Arnon, Yahu’ah, Mitzpeh Shalosh HaYamim…) with the Alon Road – 508.  It appears on maps as a path that’s part of the road.  In actuality you can reach Itamar that way, avoiding any checkpoint.

We exited Itamar through the checkpoint and passed through Huwwara.  On the way, we saw the extensive work involved in paving the Huwwara bypass road.