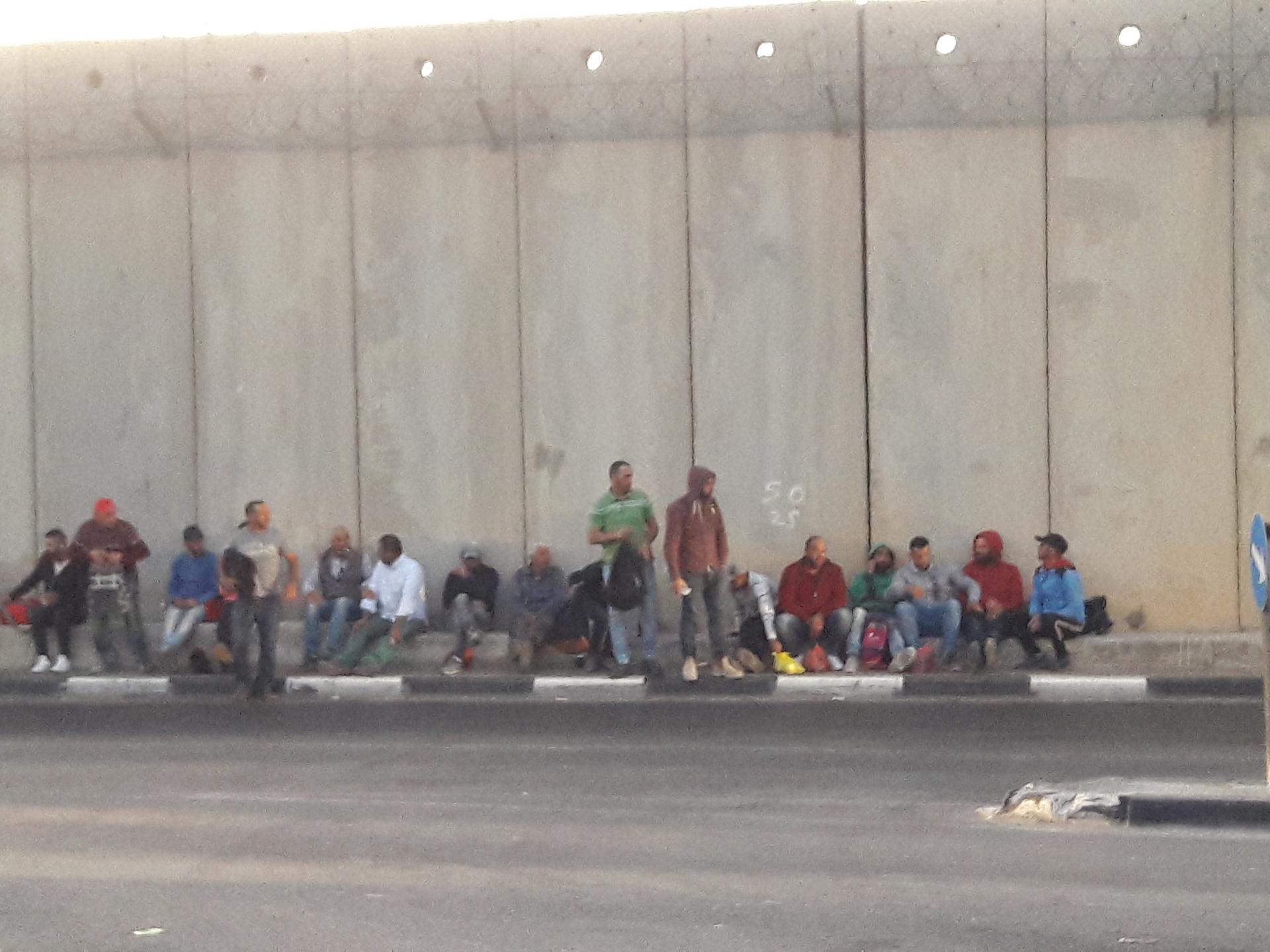 Waiting for transportation to work 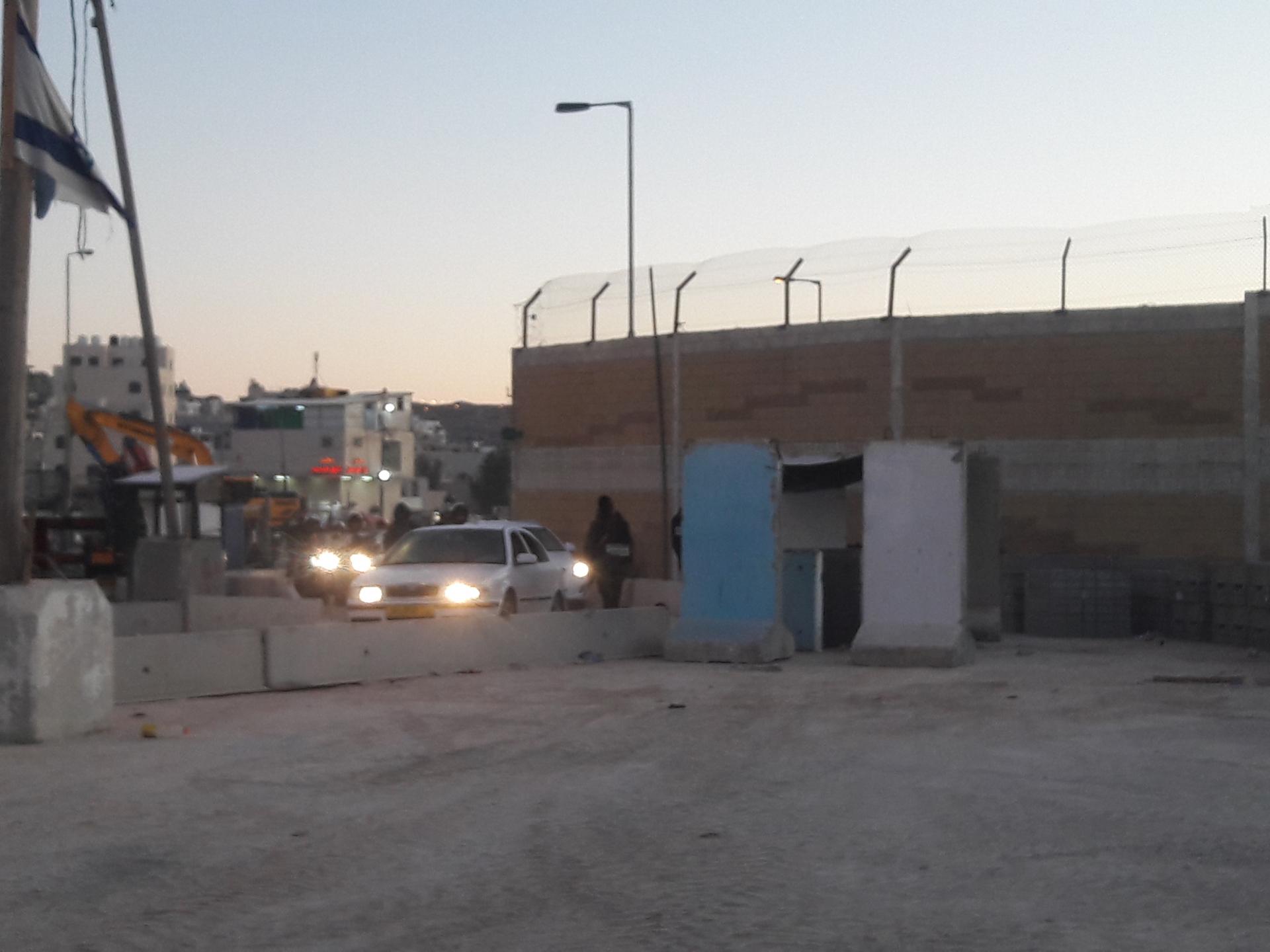 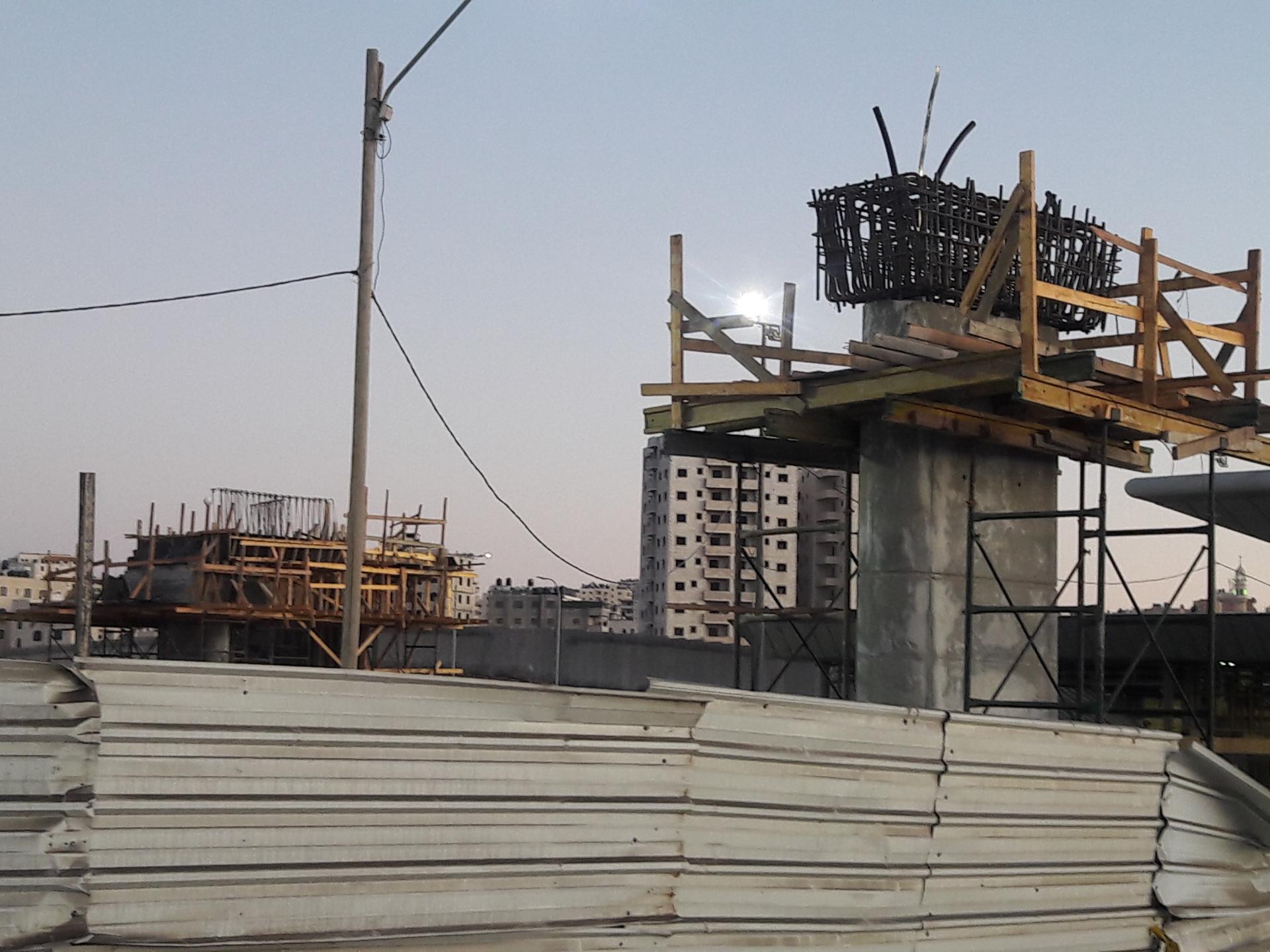 Works on bridge construction on the Israeli side 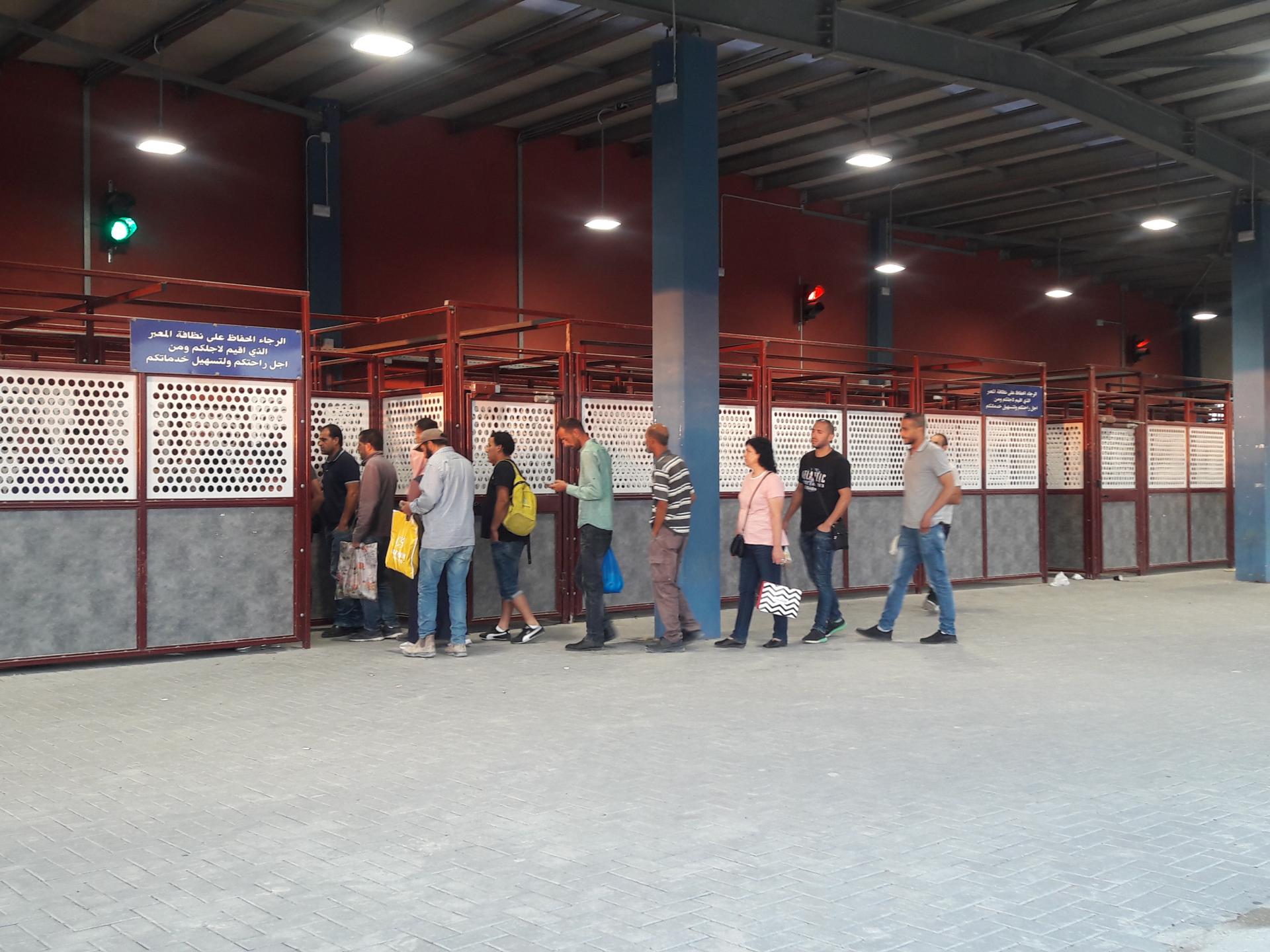 Only one entrance is open and the queues begin to accumulate 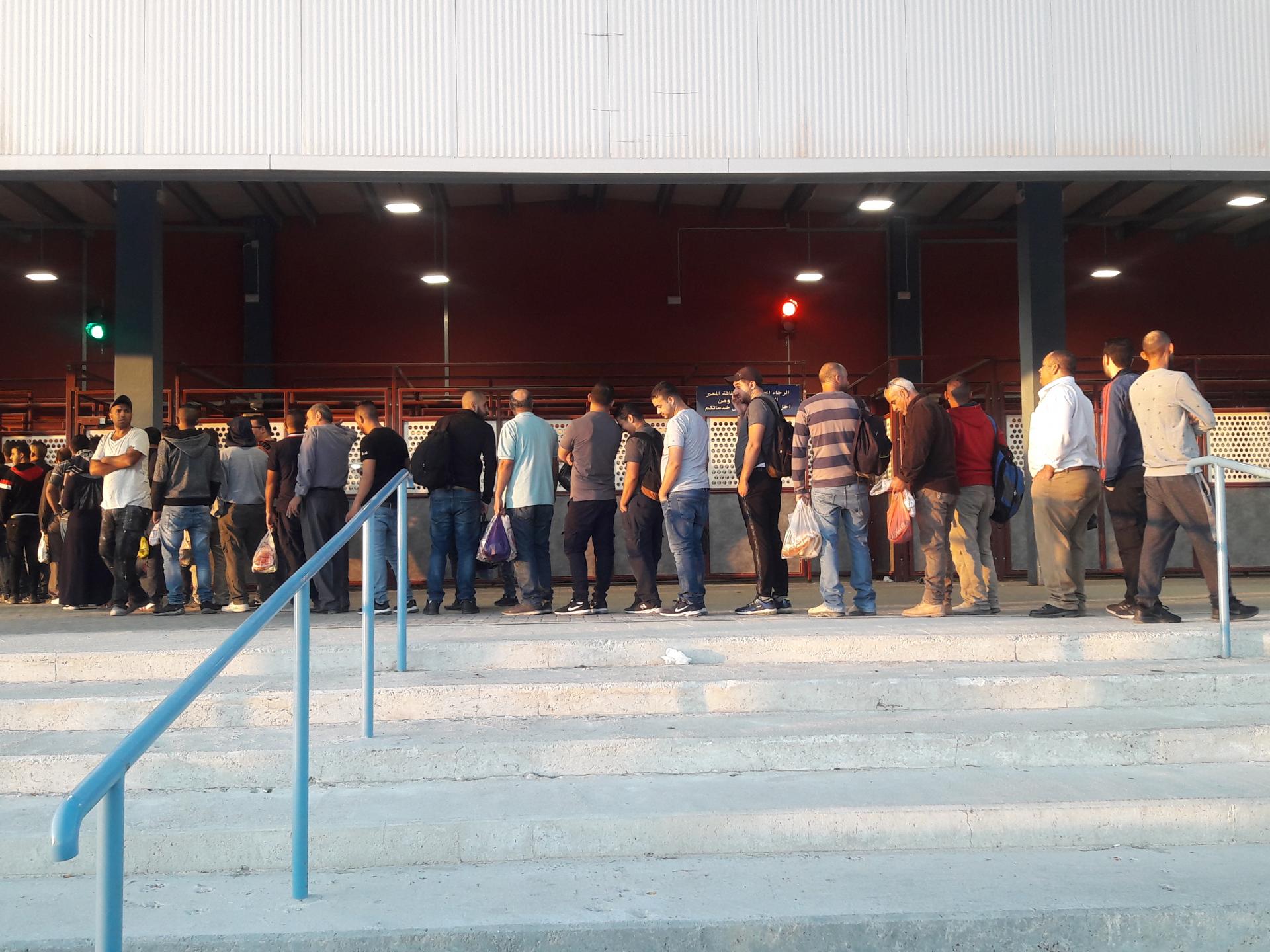 The queues lengthen quickly with only one position open 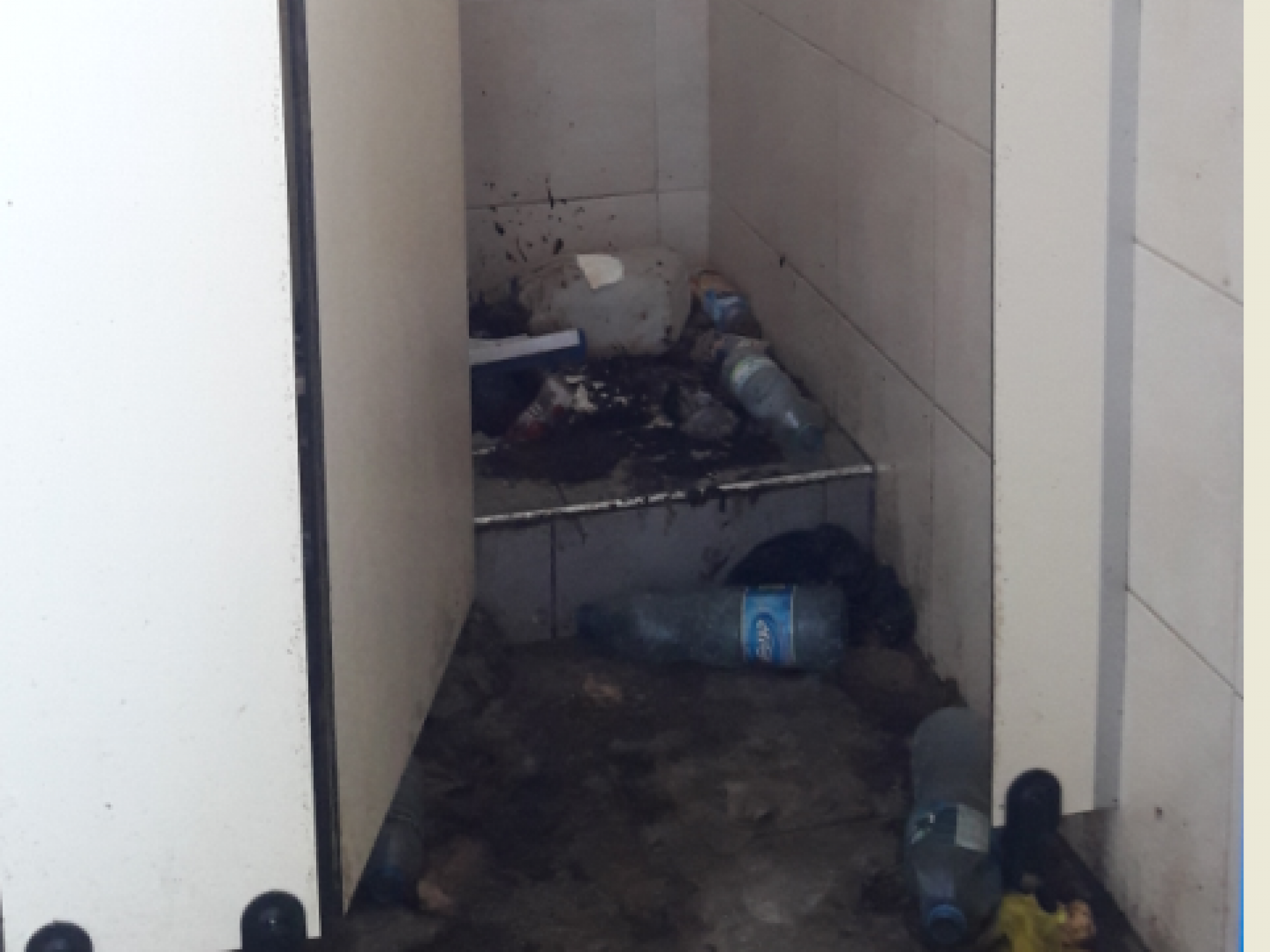 Dirty toilets near the bus complex 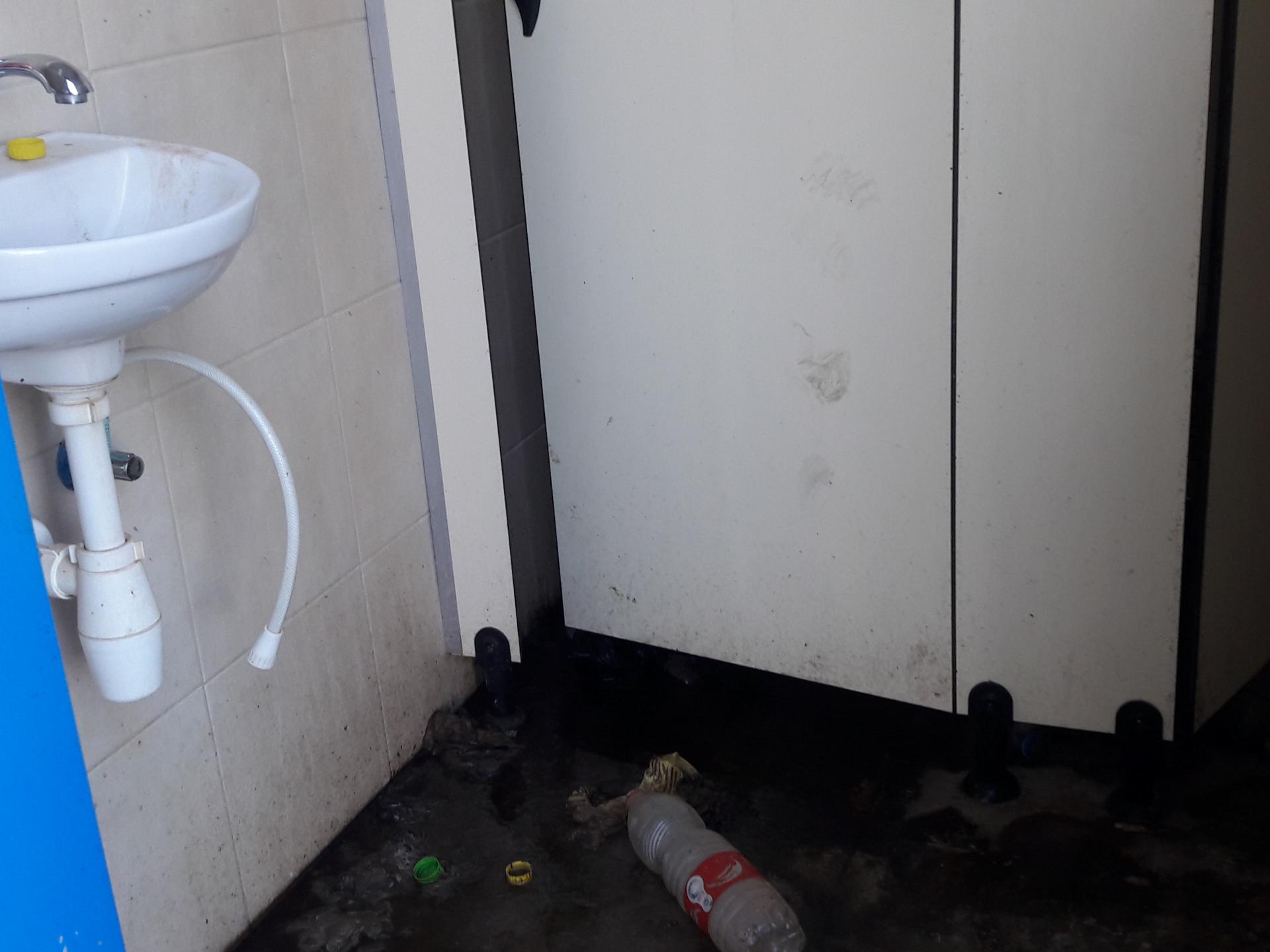 We returned again this week to Qalandiya, as last week we were unable to cross to the Palestinian side because of the shooting of the woman in the vehicles checkpoint. There is still a lot of building going on in all the roads of the vehicle crossing area.

06.15.We walked from the parking lot towards the checkpoint. The place was humming with people at this hour, sitting wherever possible and waiting for transport to work. Seconds after the photo was taken, a van arrived and half the people climbed inside.

Building in the vehicles area. Passage toward the West Bank is through the gate, open at present. Unable to go completely around the circle. Vehicles towards Jerusalem pass via the route closest to the bus area and also closest toe the pedestrian checkpoint which generally serves drivers in the direction of the west bank. There is now a temporary checking station.

Leaving the pedestrian checkpoint and afterwards on traffic islands there are large concrete pillars being built, where apparently there will be a bridge to enable pedestrians to reach the bus terminal without crossing roads.

We crossed to the Palestinian side and met our friend Abu Ramzi, the beigel seller. He had sold all his stock early today and sent a friend to bring fresh supplies. A constant stream of pedestrians, without delays. When we arrived one entrance was closed, to be followed by another – and there were red lights above them. Soon a queue developed in front of the remaining open doo – a sight we had already forgotten. Nevertheless, it seems that inside there were more than two bag-checking stations open, or that people without parcels were being let in via a side door, because people were entering very quickly. Otherwise there would have been a much longer line forming outside.

Queue forming and getting longer at the single open entrance.

Mornings are already cold in Jerusalem.  We went to buy tea at the kiosk which, we noticed already from afar, had moved back to its original side for the road. Also, the new plant nursery had vanished. While preparing our tea, our informant Muhammad told us that the very day we had previously visited, municipality inspectors and soldiers confiscated their refrigerator and equipment and plants, and anything of value. This was done without any warning, roughly and with threats, and without giving them any documents to certify what they had taken. We gave him the phone number of Council member Havilio in the hope tha the might be able to help, in addition to our colleague Yehudit to contact Yesh Din if necessary.

Our friend S. arrives and we decided to pass through with her at 7.10. Inside there were short lines in front of the bag checking machines, which moved quickly. We were held up a few minutes at the document-checking station, because the woman soldier didn’t know what to do with us and did not get help from the officer in the neighbouring station. She checked by phone and then we explained that we were from Machsomwatch, which satisfied her. S., who has a magnetic card and computerised permit, was already through, of course, and waiting for us. We accompanied her to the bus terminal, partly to check the toilets that we had only now heard of.

Next to the vehicles checkpoint on the West Bank side closest to the bus terminal on the Israel side, there is a route to public transport. Empty buses pass there. Passengers get out and go to the checking station. Only blue identity card owners, pupils, and special permit holders are allowed to pass.

We approached the toilet building – similar to the one in the old checkpoint. A local man warned us that the place was disgusting. Its condition was catastrophic, even worse than the old ones before they were recently cleaned. In the washbasin there is a tap but no water. We did not dare entering the stalls themselves to see if there was running water…

We parted from S. with Shana Tova greetings, and left for home.