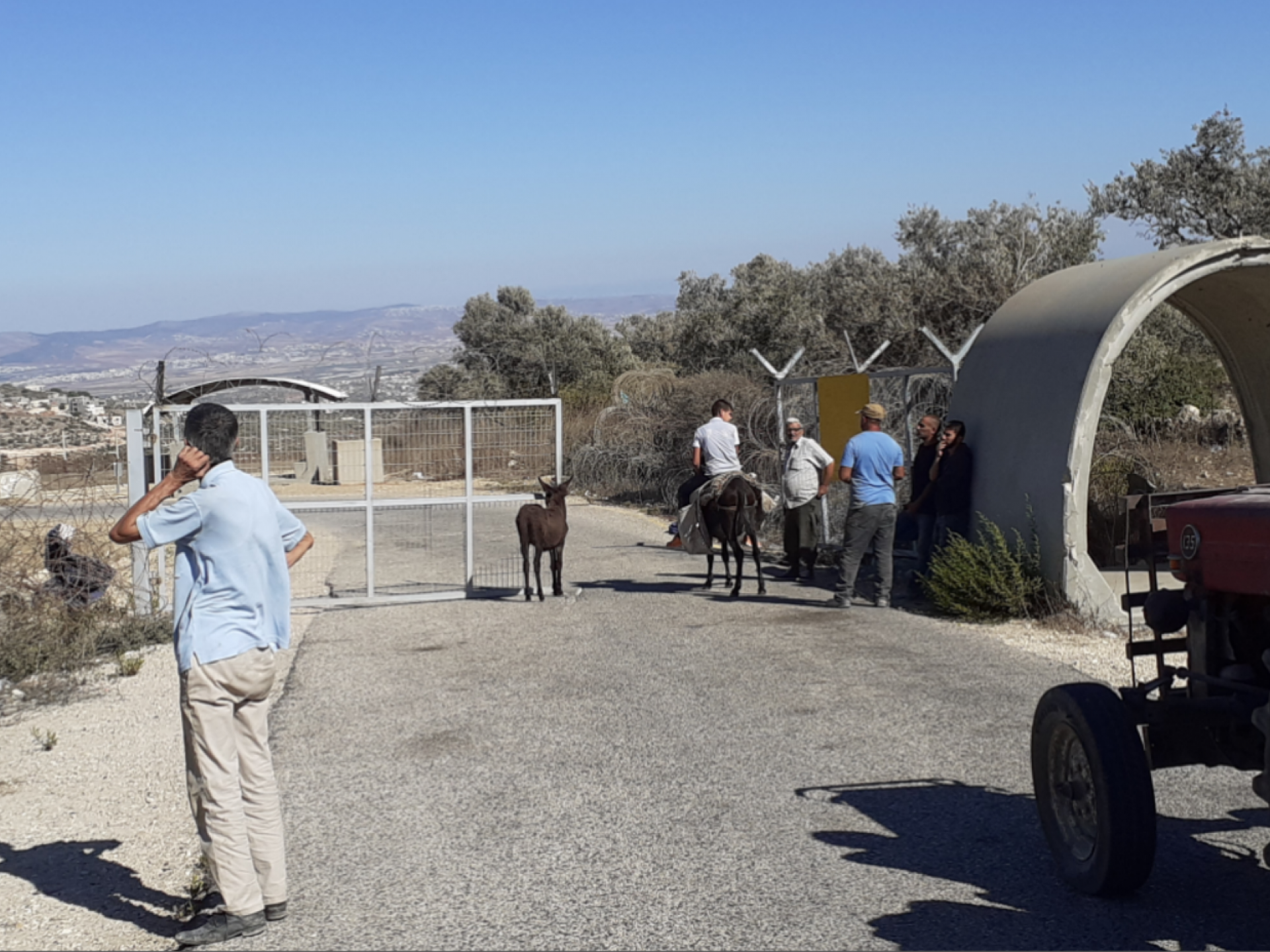 A'nin checkpoint: six people, a tractor and two donkeys are waiting to cross the checkpoint to their village

We left earlier than usual today, because we took an acquaintance we have known for a long time, and his wonderful mother with us, from Rambam Hospital in Haifa, to Barta’a Checkpoint, in the framework of the organization, “On the Road to Recovery”.

Ali and his mother are awarded special treatment from security at the checkpoint – they are allowed to pass in an Israeli car in a lane designated for Israelis. It looks like even here, they respect the heroism of the two, who have fought Ali’s cancer for many years, that attacked him in his childhood. Ali is now 19 and has a permit to drive a car.  We let Ali and his mother off in the parking lot above the road of the checkpoint.

We continue on to Harmish Checkpoint.  The checkpoint is open and the traffic in the direction of Baqa al Sharquya and Tulkarm flows freely.  The installation of new light posts continues. We turn in the direction of Ya’bed and the settlement of Mevo Dotan (the sale of homes in the settlement continues) and we stop on the way at the store of our friend, F.  She seats us in the well-groomed and blooming courtyard with her friend, and the friend of her niece. We observe school children returning home, young girls dressed in uniform striped dresses and three boys on bicycles.  From there we continue to Ya’bed-Mevo Dotan Checkpoint.  The checkpoint is not manned.  Two towers were added to the cement cubes that slow down the traffic.

14:00 – On our way back we pass across a side road that goes up to Ya’bed.  The road has been blocked for years with a yellow metal gate and two similar gates

on the side of the “bridge”. Past those gates, cars are parked, whose drivers save themselves the necessary detour in order to arrive at the Barta’a parking lot. The parking lot is full at this hour. As yet, no workers are seen coming from their jobs, so we continue on our way.

Surprise:  A Palestinian worker strenuously sweeps the area of the checkpoint, but only inside the boundaries, “of course”, and not, “heaven forbid”, the filth outside.

Individual cars pass in two directions.  Every car waits unnecessary minutes.  Why? A resident  of Daher al Malec passes to the Seamline Zone in his car.  He owns two chicken coops and a carpenter’s shop.  He is interested in hiring a worker who lives beyond the security fence, and hasn’t been successful in getting a permit for this person, to work in the Seamline Zone.  He would want to know at least the reason why he cannot get one.  We gave him the note with Sylvia’s phone numbers.  Another person passes through with his baby

son.  He complains that the inspectors yelled and frightened the child.  A brother, who works in a government hospital in Jenin, passes through in his work uniform.  In the shelter, a mother and her baby are waiting (she works in a hospital in Jenin and the boy is in the kindergarten, next to the hospital) along with a high school student and a student who studies English.  All of them are residents of Umm Reihan, and we take them there.  The student really worries about us, and suspects we will get lost. In fluent English, he suggests help.  It becomes clear that we know the area well, and have been observing the checkpoints since the student was 16 (he is now 21).

Only six people, one tractor, a donkey and a young donkey wait to pass through.  People tell us there are no permits.  The soldiers come early and arrive at 15:10. But they don’t hurry to open the gates of the checkpoint.  When they decide to open, there is a problem with the middle gate.  In the end it opens and they call everyone to pass through. There arises some difficulty for the young man in passing through with the donkey and the young donkey.

15:30 – The young man, the donkey and the young donkey pass through. We travel home.