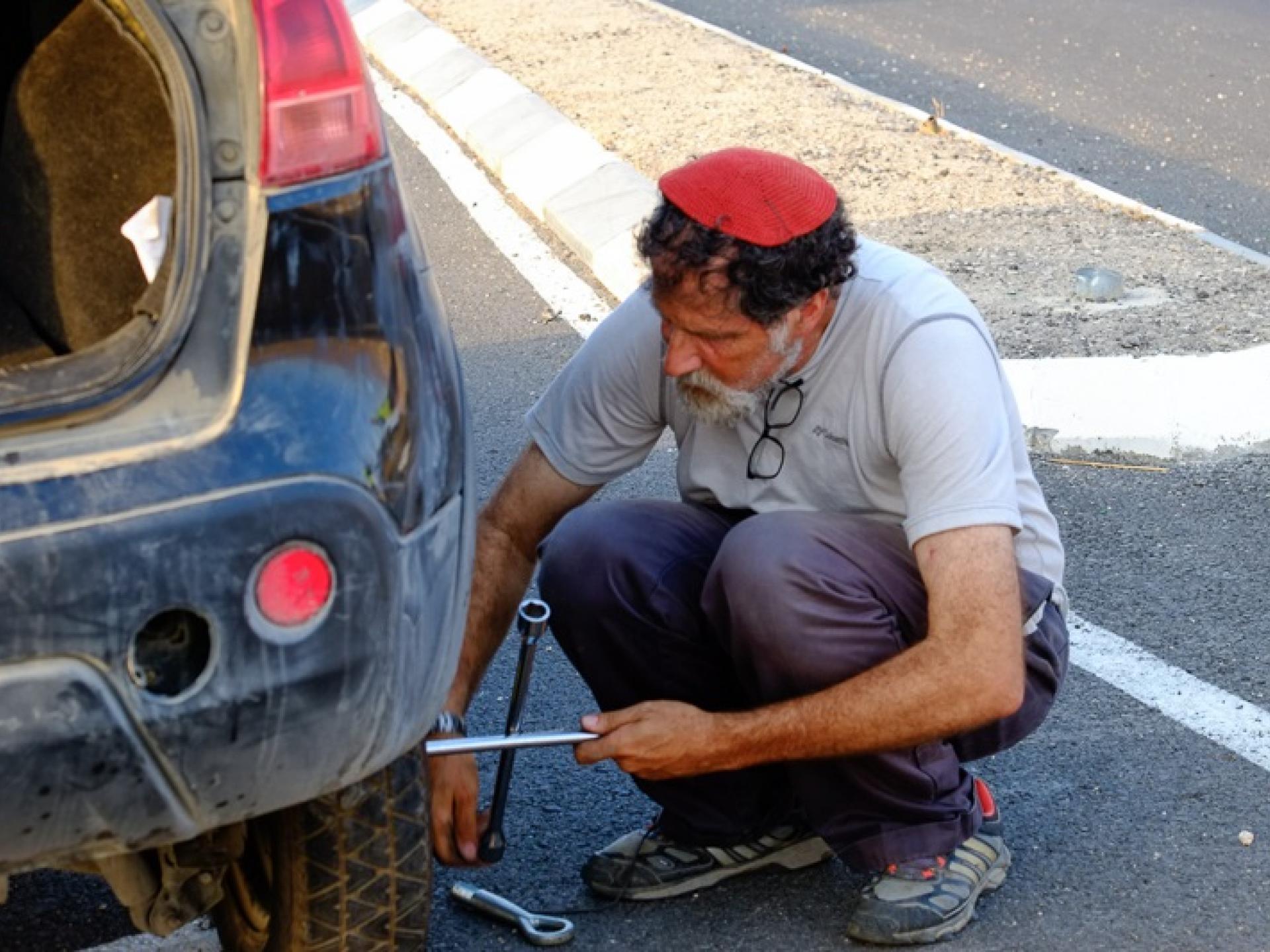 Soldiers at the beck and call of settler-colonists: Rabbi Asherman changing the tire punctured by the spikes pushed by the soldiers right in front of the car
Photographer:
Rita Mendes Flohr 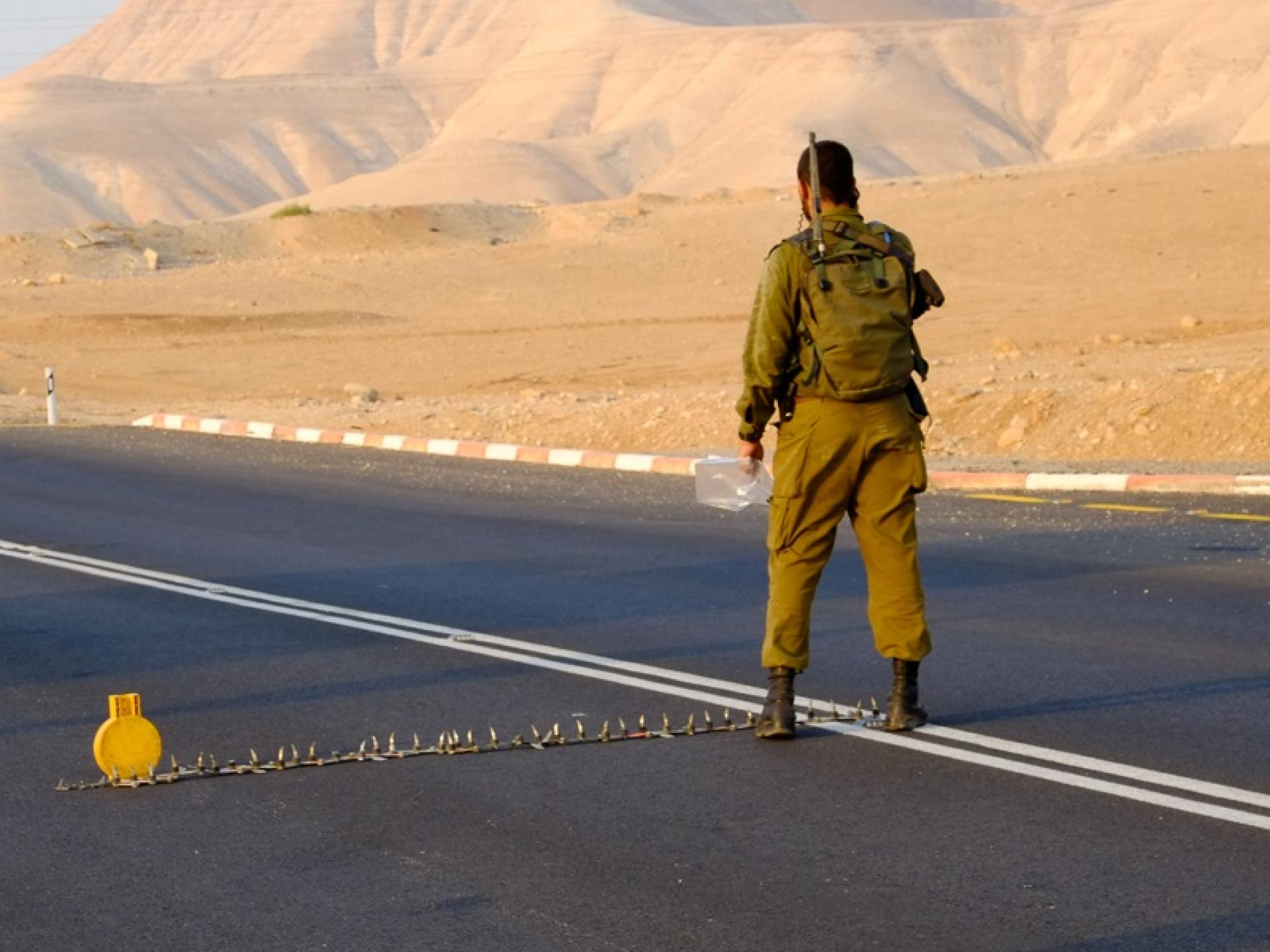 The spikes pushed by the soldiers right in front of that car
Photographer:
Rita Mendes Flohr 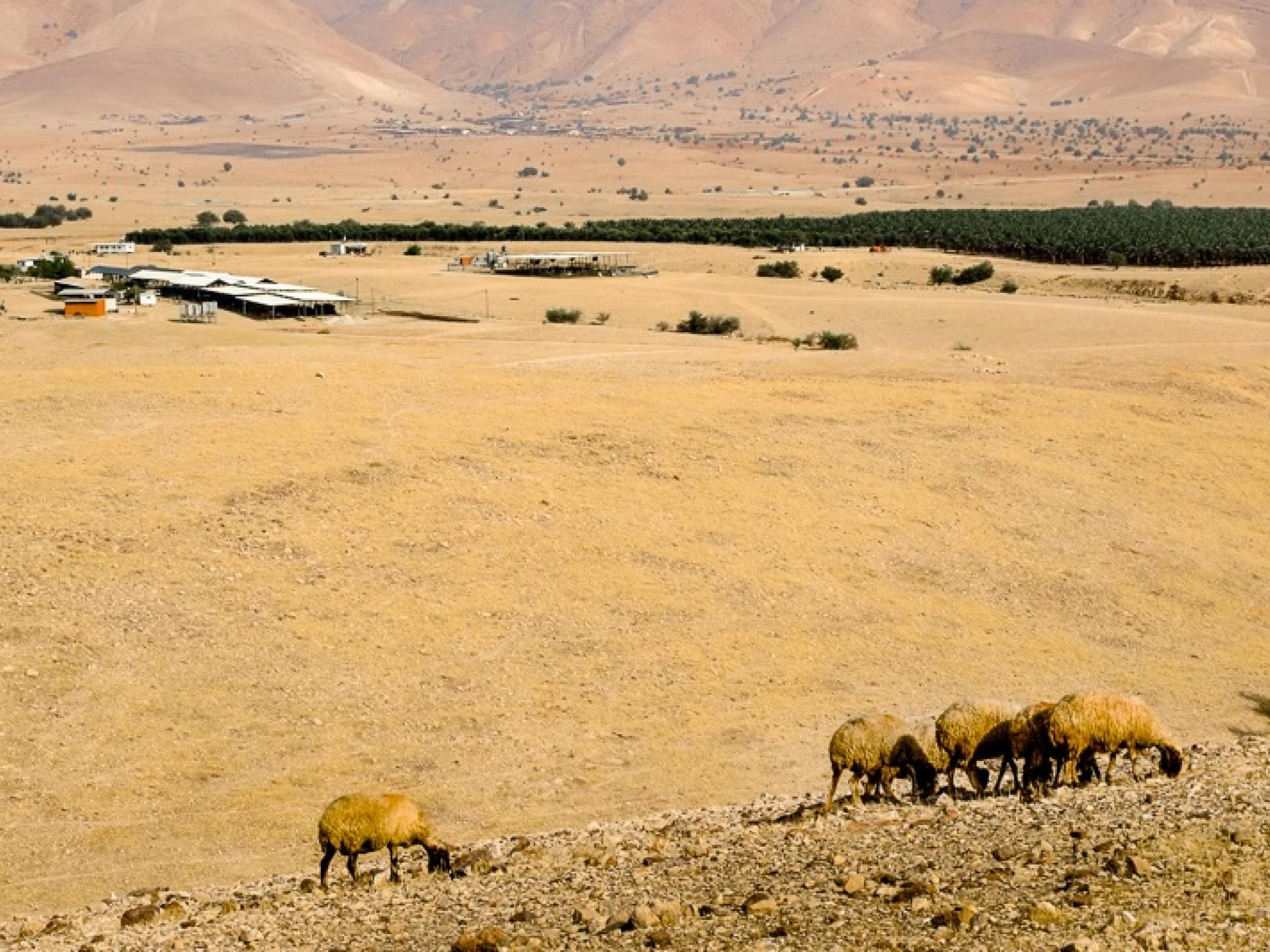 Another day of accompanying Palestinian shepherds in the Jordan Valley, near Ouja.

Again the army again in service of the illegal outpost Havat Omer - they went out of their way to set up two roadblocks especially aimed at stopping Machsomwatch and Ta’ayush activists from reaching the Palestinian shepherds, knowing we arrive at six a.m. One jeep stood stood at the turn from route 90 at Ouja, and another on route 449 from Yitav going south, near the pillbox.

Today the army introduced a new trick, an order that allows the officer to stop cars at their discretion, without giving a reason. Everyone else was allowed through, but not two cars of Ta'ayush and Machsomwatch and they even deliberately punctured the tire of Rabbi Arik Ascherman's jeep claiming he did not stop, when in fact he did (all five of us were witnesses) – shoving the spikes under his car. Arik was furious. They called in the police, who took our identify cards and Arik’s testimony and finally got the soldier who punctured the tire, to show his identity card to Arik.

In all, at least three army jeeps and a police car were busy with us for a good hour – the authorities really spend a lot of time and resources trying to stop Ta'ayush and Machsomwatch in the service of the illegal settlers - using our tax money. There was also the usual – illegal – ‘closed military zone’ order, which we photographed, and studied the accompanying map.

All that commotion did not stop us from reaching the shepherds on foot, a nice hike in the hills before the heat set in - and the sheep grazed in an area where the 'closed military zone' did not apply - with Omer's farm in the distance.  The other activists made it to the shepherds near Mevo’ot Jericho and accompanied them there.

Around nine o’clock, another army jeep appeared, but we showed them on their own map that the shepherds were outside the close zone. The commander of the jeep said he was there to 'protect the citizens of Israel' - i.e. the illegal settlers? Presumably from shepherds who graze several kilometers away from Omer's farm??

In the end, all herds were able to graze today.

At a short visit to a herders’ community further west, we heard that the violent hilltop youth had returned to Baladim in the hills near Kochav HaShahar. The herders saw they had a large knife – and so they fled away from there.