The plundering of Qusra’s land continues, as does the violence from Esh Kodesh.

Qusra’s periphery has been stained north and south by settlements.  To the south:  in the 1980’s by Migdalim which is partly located on village land, and to the north since 2000 by the illegal outpost Esh Kodesh whose settlers have been attacking Qusra villagers from the day Esh Kodesh was established.  Plundering of land to the north resumed about two weeks ago.  The violence by settlers to the south continues with the backing of the Border Police whose base is next to Esh Kodesh.  That’s a violation of the laws of occupation which require the army to protect the inhabitants.

We left Kfar Saba at 13:00 and reached Qusra at 14:10 – there was a huge traffic jam at Za’tara junction in all four directions.  The area of the Tapuach checkpoint is full of construction vehicles and building material.  No Palestinian vehicles have been detained.  Palestinians on foot aren’t allowed into the plaza to prevent them from passing the bus stops where settlers wait protected by soldiers.  So Palestinian taxis detour around the plaza and exit on a side road.

14:10  On the road into Qusra we saw to our right, on the slope from Migdalim down to Qusra, bulldozers leveling the land.  When we reached the municipal offices we learned what was happening.

Two officials greeted us.  They told us the mayor had resigned because of the upcoming elections in October and the Palestinian Authority had appointed a temporary replacement.  They told us what the bulldozers were doing on land where almond trees had blossomed in the winter.  H. said the Migdalim settlement began in 1981 as a military base on private land belonging to a resident of Qusra.  The residents’ suit was denied on the grounds that it was a security installation.  In 1983 it began to be transformed into a civilian settlement (according to Wikipedia it was first a Naha”l base, and later a settlement).

H. says that in December, 2015, residents of Qusra were surprised to discover a sign erected on the slope between Migdalim and the entry road to the village.  It announced that the land (including the almond grove) has been expropriated.

Two weeks ago bulldozers appeared and began to level the land.  Nothing remains of the almond grove that was located on private land.  During the first few days the army closed the entry road during the hours the bulldozers were working.  Representatives of Yesh Din came to the village but a Palestinian who accompanied them wasn’t permitted to exit the village.  They remained with him until work ended in the afternoon.  The residents contacted the Palestinian Authority which went to court in Bet –El.  In response, a stop-work order was issued.  So what?!   The bulldozers continued working despite the order.  Palestinian Authority attorneys are dealing with the matter, but the bulldozers haven’t stopped.

And what about the southern periphery?   Part of the illegal outpost of Esh Kodesh is located on private land belonging to Qusra residents and the villagers suffer harassment by the outpost’s hoodlums.  They’ve ceased cultivating land near the outpost but the settlers’ appetite has only grown, and with it their violence.  When residents of Qusra complain to the police in Ariel they’re told the area is under Ma’eleh Efrayim’s jurisdiction.  When they complain to Ma’aleh Efrayim, they’re sent back to Ariel.

We went to see the two outermost buildings of the village.  Samir Ibrahim Mustafa’s home is now surrounded by a stone wall topped by a metal fence.  The windows are blocked by stones with only slits between them for fear of smoke bombs.  The wall was built by an international organization which assists people in dangerous areas. 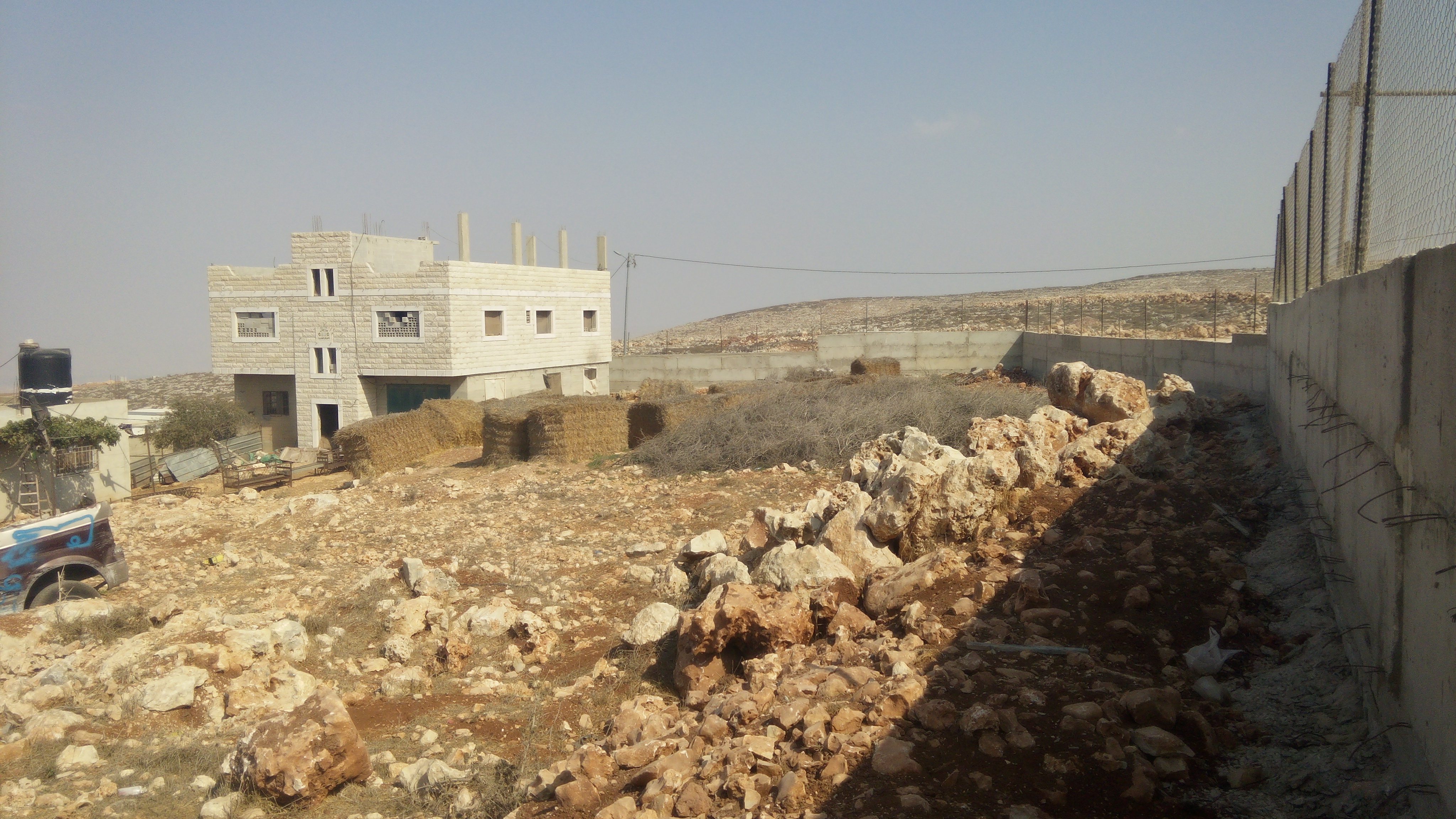 Samir Ibrahim Mustafa’s new home is surrounded by a wall and its windows are blocked because settlers from Esh Kodesh fire smoke grenades and break the glass.  The bales of hay are also now guarded against theft. 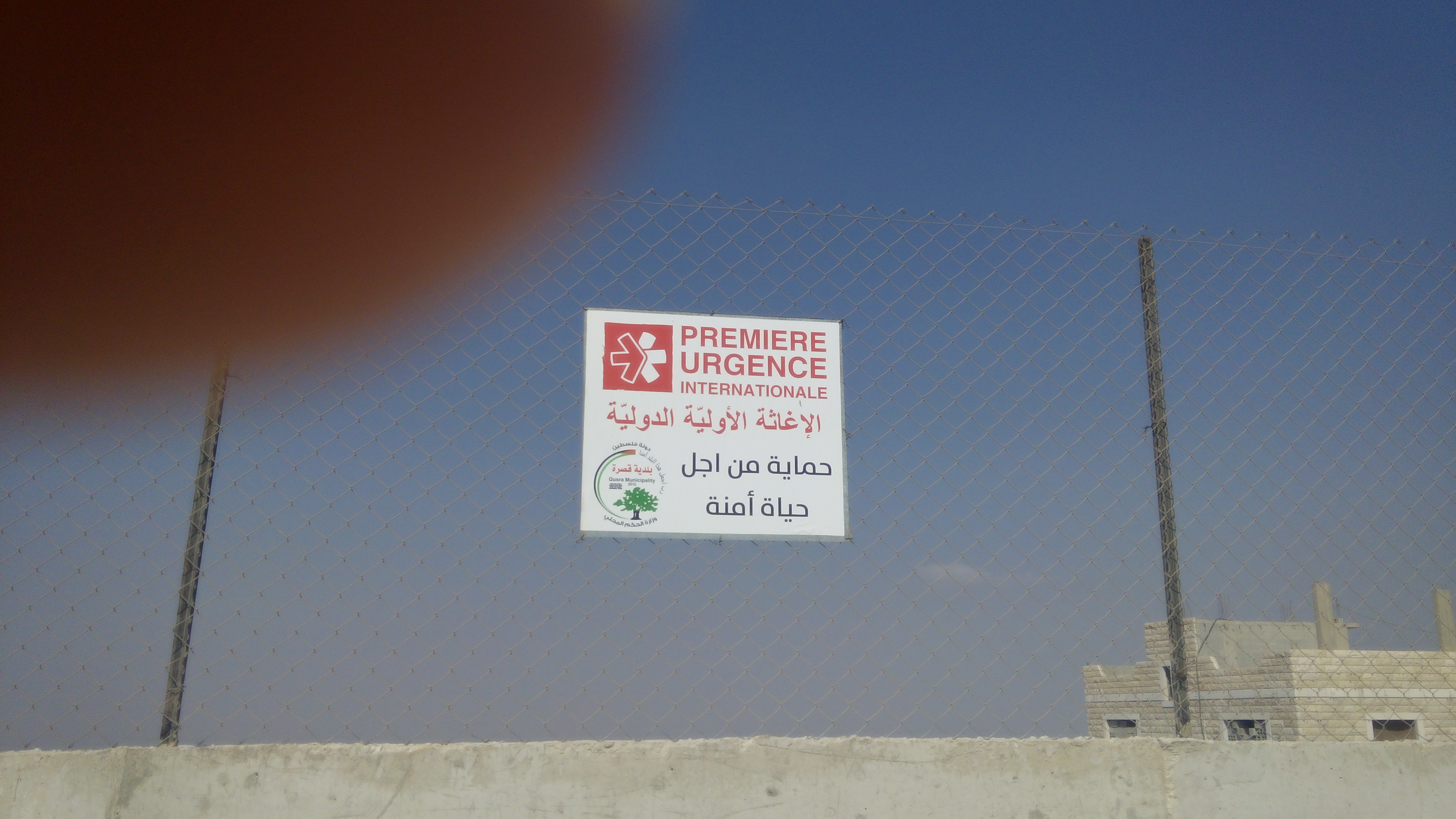 The sign from the international organization that built Samir Ibrahim Mustafa’s wall.

It seems that a few months ago settlers approached the house, fired smoke grenades, set the owner’s tractor on fire and stole the bales of hay.  Children and animals were in the house.  The children were hurt by the smoke and suffered respiratory problems.  The residents contacted the DCL.  But even before they arrived Border Police had preceded them, coming from the base near Esh Kodesh, and threw smoke grenades.

Smoke grenade launchers were strewn on the ground among the village homes.  That’s what happens to people whose lands are desired by Esh Kodesh settlers. 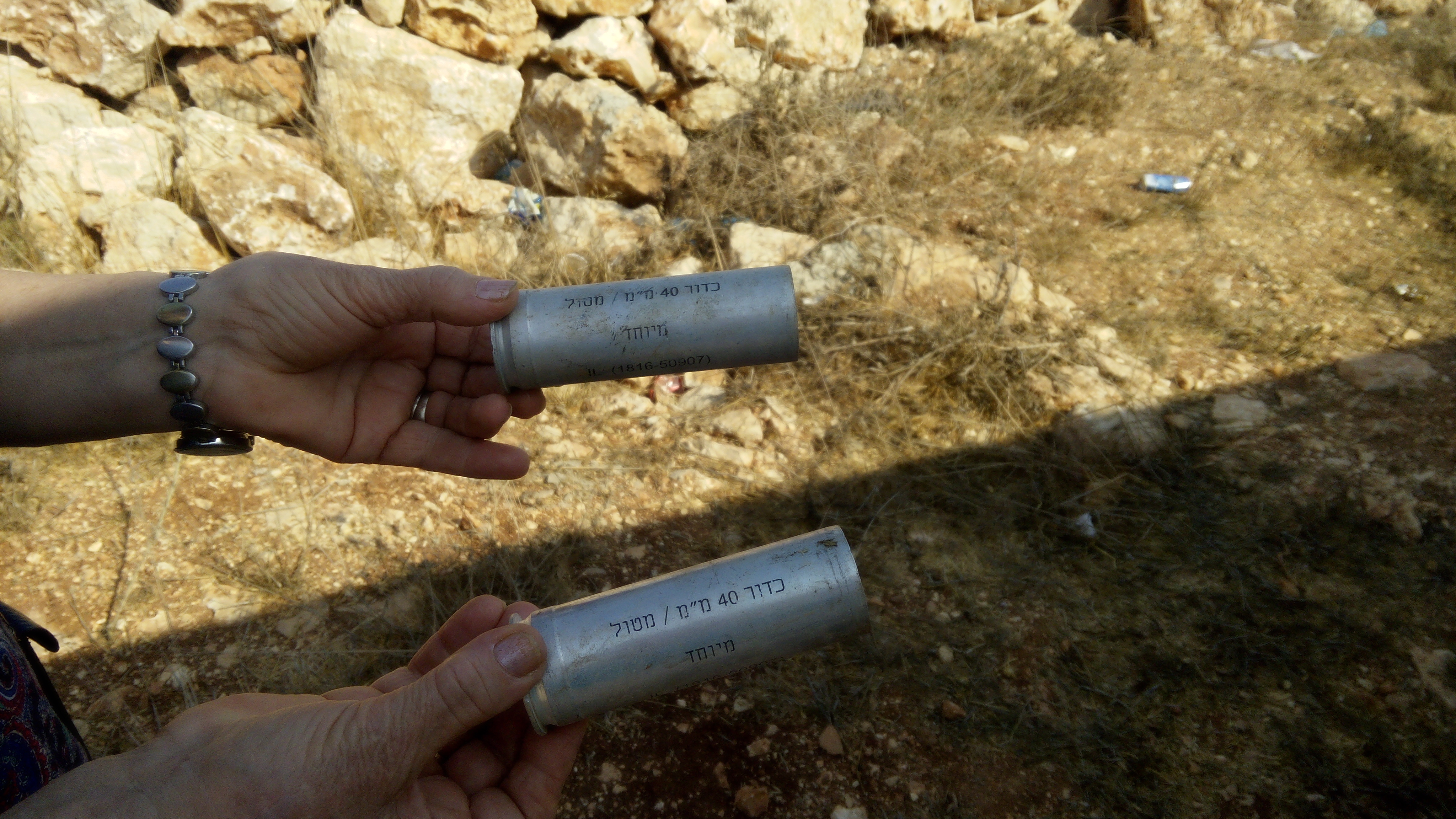 One of the dozens of smoke grenade launchers strewn on the ground among Qusra’s houses.

Another home is nearby.  Recently hoodlums from Esh Kodesh came down and broke the fence around the storeroom of agricultural equipment and broke the windows.  Children were also at home then.

A Mekorot well is right next to Qusra, but it provides water only to the settlements.  Qusra receives water from the Palestinian Authority through a pipe from Rajoub.  There isn’t always enough water so the village may sometimes be without water for 3-4 days.  Residents then buy water in containers from the Mekorot well, at a higher price.  They pay the municipality.  The problem, we were told, that when those in Shiloh who are responsible for supplying water to the settlements learn there’s no water in the pipe from Rajoub to the village, they sometimes also turn off the water from the well and turn it on again only at 1 AM.  The reservoirs in the settlements (which partly empty during the time the water was shut off because of what the settlers use) refill, so that the settlers have an uninterrupted water supply.  Residents of Qusra are left without water during that time.

In sum,  three crimes of the occupation:  Plunder of land, control of water sources and settler violence, in cooperation with the Border Police, all heaped on Qusra.