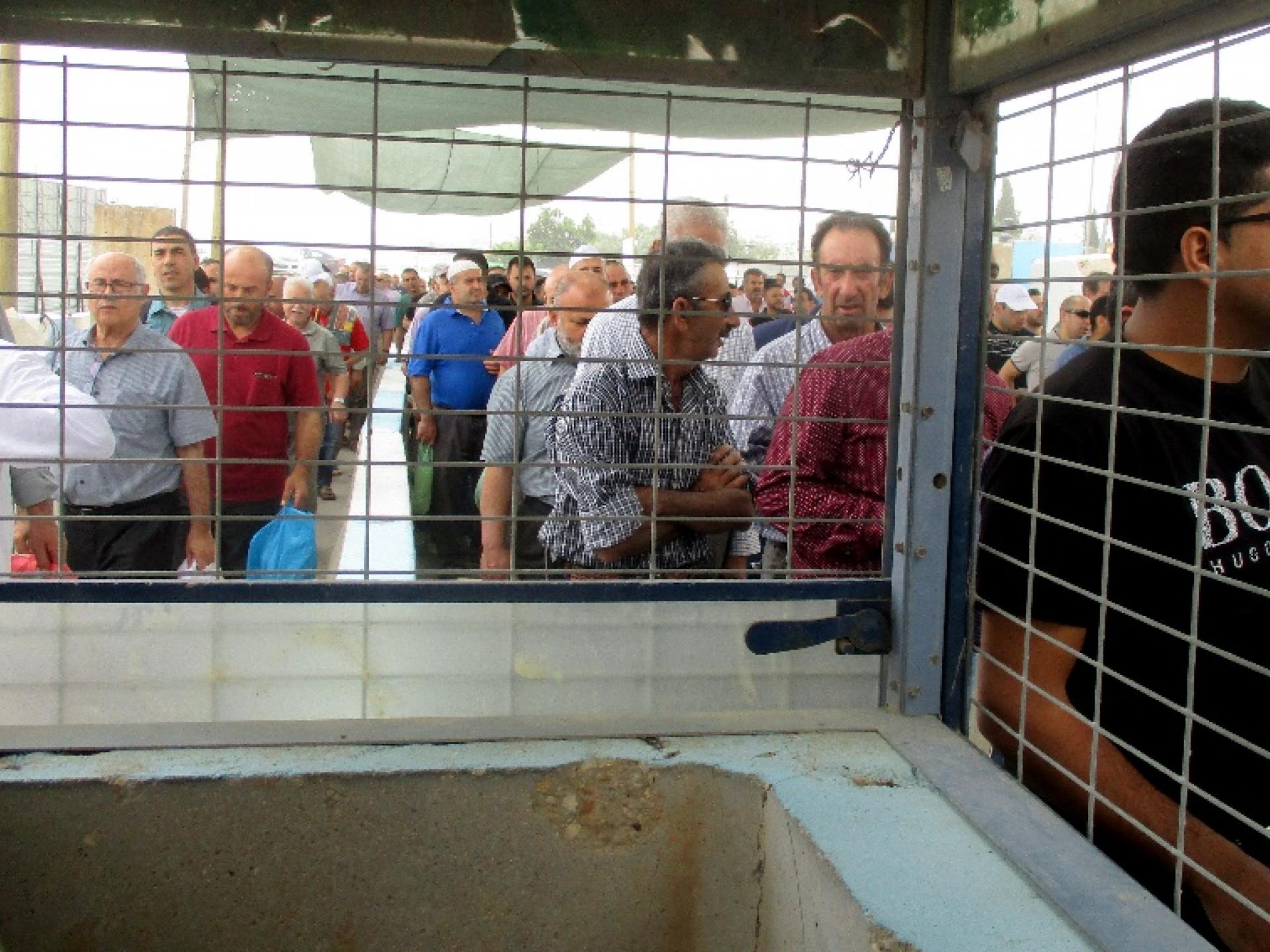 Streams of people spilling out of the field of vision crowded in front of the checkpoint
Photographer:
Tamar Fleishman

Streams of people spilling out of the field of vision crowded in front of the two functioning entries to the checkpoint. People’s way to prayer at Al Aqsa mosque is no easy task, neither fast nor clear of the filth of man-made obstacles. The comers were not allowed their right of personal choice. Neither the way they choose to take, not the track they are to wait in, nor what to hold in their hand.

Everything runs only by the letter of the book and orders. Everything is policed and absolute and determined top-down to the last of details. The soldiers sound as if they participated in anger-management workshops: they generously use hollow clichés of “please’ and “Ramadan Kareem”.

A Border Policeman went the extra mile as he blocked vehicles 2 kilometers before Qalandiya and made us all continue on foot, but took care to greet every dirver with “’Bro” or the Israeli slang equivalent of “dear”, thought he was cool and couldn’t understand how disgusting and wrong his speech and conduct were.

At the heart of the sterile

area stood a policeman who carefully observed gthe appearance of those who had already succeeded to cross the first selection, and from time to time pointed at one of them and called over to the soldiers: “Turn this one back”. The latter did his bidding and pulled the man over to the ‘good riddance’ gate.

One man who was turned back attracted my attention. He was not young, his head mostly bald, graying at the sides, his long and tangled beard a faded ginger color, and when he heard his verdict he repeatedly  claimed he had a permit.

Why? I asked the policeman. Look at him. He looks like someone who when getting to the Al Aqsa compound will preach and incite so he better not get there.

In addition to soldiers and policemen and Civil Administration personnel and Border Policemen, uniformed Palestinian police worked the outer ring, subject to the Israeli army’s orders, and saw to it that men do not walk the women’s track nor vice versa.

A trusty source said that a week ago, too, they were there but not easily recognized because they had been wearing civilian clothes.

Every person has the right of their personal space between bodies, every person also has their own personal pace, dictated by their body and physical limitations and will. All of these are taken away from Palestinians who come here, to the region of inaccessibility and controlling the other both privately and collectively.

One could say that order reigned, and in the same breath mention that this order is nauseating.

Everything was dictated top-down and set as if the Palestinians are brainless and mere actors in an absurd theater play written, directed and timed to the very last detail, a play of these versus those, of the ones holding rifles and the ones holding prayer rugs. A bad play, that even when covered with stage makeup remains cracked and ugly.

And if control does not suffice, with all its tones and colors and flags, a new concrete bloc has been added to them with an old inscription that would not shame a single army unit or military academy or even a pre-military seminar.

(Written in Hebrew: “[the Jewish] God is the King”) 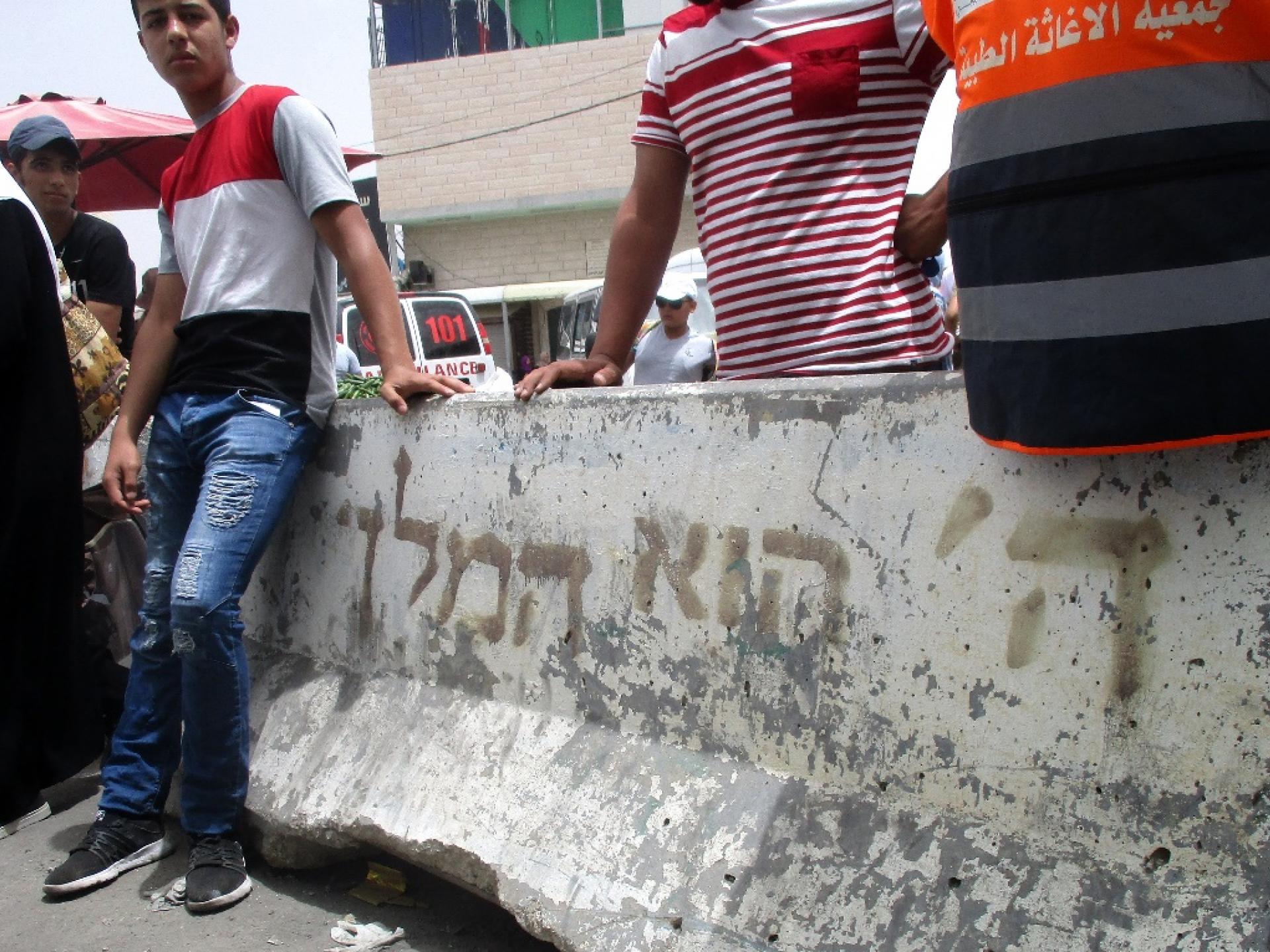