5.15 We parked before the checkpoint and passed on foot to the Palestinian side. There were already long lines although all 5 checking stations were open. Every few minutes the lines lengthened as this was peak hour and people kept arriving. Very soon the lines reached into the parking lot. People told us that earlier in the week conditions were calmer and they did not know why there was such pressure today.

At about 5.40 a policeman and policewoman arrived, but there was no improvement. The queue was orderly though, and the men let women join just before entering the cages leading to the turnstiles. At about 6.00 people started gathering at the humanitarian gate. When a soldier arrived to relieve the soldier in charge of managing the turnstiles people asked her about the humanitarian gatebut couldn’t catch her reply.  We suggested they ask the policewoman.  The minutes pass and there is no sign of the DCO soldier who should open the gate. Women try to decide whether to wait there or to join the regular queue. At 6.15 a security man arrives, but this is still not a sign of the gate’s opening.

At 6.20 the humanitarian gate is first opened.  The DCO soldier and the policewoman ‘sift’ the people waiting.  Older folk without permits are told to return at 8 o’clock. Many of them join the regular lines.The women try to ‘inflitrate’ the line just before it enters the enclosure but this time the men are less sympathetic and don’t always allow this. Men who are refused entry at the humanitarian gate have to join the end of the queue.  When the humanitarian gate opened we saw a few ’refused’ men trying to squeeze through with the rest – one succeeded, another was caught and sent back in shame. 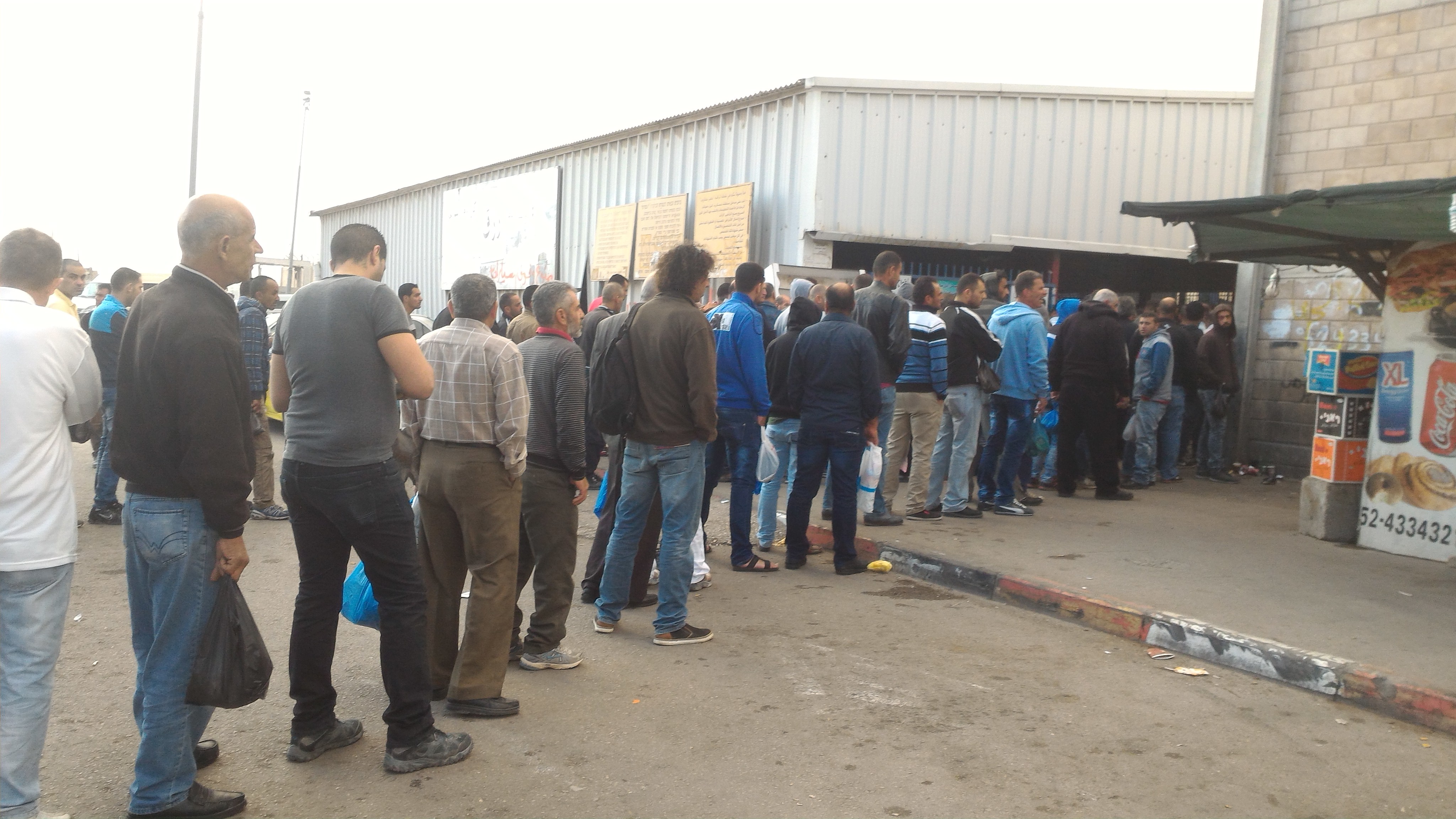 On our way back from the tea kiosk (the usual seller is away, looking after his father who is now in hospital, and his older brother is serving), we make our way through the long queues waiting outside the hut. [See pictures]. Inside we meet familiar women.  One works cleaning offices and houses in Jerusalem.  She says she has been working 30 years but now, because of her age, she enters without a permit. But she is not allowed to enter before 8.00. The policeman warned her that, if she tried to enter earlier via the regular line, she would take her identity card and return it only after 9 o’clock. Meanwhile the policeman has left but she is afraid to join the regular line. She tries to persuade the DCO soldier to let her through the humanitarian gate, but in vain. Only after 7.oo she decides to join the regular line – and passes through.

In the regular line every now and then there would be some chaos as people refused in the humanitarian gate tried to fit in just before the enclosures, but this never led to the line’s collapsing. Now and again someone took responsibility for restoring order and preventing people from pushing in. At one stage there were on duty 2 soldiers (one managing the turnstiles, one DCO soldier), 2 policemen and a policewoman, and 2-3 security men – but none of this helped improve the situation in the queues.

Only after 7.30 did the queues become shorter.  But then one of the turnstiles (the one furthest from the soldiers’ cubicle) broke down.  Whenever the other two turnstiles were stopped, this one kept turning, letting crowds in to the checking stations. Those waiting in the other two enclosures started shouting. When the security guards noticed what had happened, they told people not to use that furthest lane and then tried to block entrance by putting a temporary police barrier. Afterwards they brought a chain and locked the turnstile to the barrier, so that it could not turn.  Now there were only 2 lines available.  It was lucky that this happened only after the lines were already shorter. We hoped that this technical problem would be solved by next morning!

We joined one of the lines at about 7.45.  It took 15 minutes to pass through – to join the morning traffic.