Tura Checkpoint is built on his land, but he is only allowed to cross there on foot, but not in his car.

14:30 – As usual at this checkpoint there are few people crossing, but there is a lot of litter.  A  man told us that this afternoon he was not permitted to drive across the checkpoint from the West Bank to the seamline zone in his car, despite the fact that the car was listed in his crossing permit that the soldiers have.  The soldiers claimed that the man's permit is not the type that allows a car to cross.

We called the Liaison and Coordination Administration and spoke in three languages: in English with the man, in Hebrew with the woman soldiers at the Liaison and Coordination Administration, and the man spoke to a Druze soldier in Arabic.  The man, who was born in Dahar al Malec in the seamline zone and resides there, spent 19 years in Dubai with his wife and children where he worked as an accountant at a hospital.  Despite his professional success he decided to return to the village where he was born with his family.  He does not have a permit of a permanent resident of the seamline zone but he has another type of permit that allows him to cross at Tura Checkpoint but not in a car.  How is it that he was allowed to cross in his car until now?  It was a mistake.  The soldiers did not check his permit thoroughly, but today they checked thoroughly.  He was told to go to the Liaison and Coordination Administration in Salem tomorrow with all his documents and request to have the permit changed.  This is not a simple matter.  We wished him luck.  Before we left he told us that the checkpoint is built on his family's land.  Unfortunately I did not write down his phone number.

15:05 – The checkpoint was already open.  The few farmers who crossed

To their fields approached the military policemen one by one.   The two tractor drivers were asked to leave their tractors outside the checkpoint area, approach the soldiers on foot, and then bring their tractors through.  Note that these people are returning home to the West Bank – not crossing into Israel or the seamline zone.

The checkpoint was not manned.  On the road next to the checkpoint there was a red sign reading that Israelis are forbidden to cross into Area A. There was also a yellow sign forbidding crossing with different wording.  This is also standing near the turn to the settlement of Mevo Dotan.  The yellow sign mistakenly gives the impression that Area a starts immediately in back of the checkpoint.

A car with an Israeli license plate stopped next to us and the lieutenant driving it asked in concern if we were lost.

The new sheds are now standing in their full glory and the old fence has been taken down.  The renovation work is progressing.    We asked the drivers when they would begin operating and they referred us to the contractor.   The contractor from the village of Usfiyyeh [a Druze village near Haifa] said they would begin in a couple of weeks.   When we asked him what he thought of the checkpoint he replied that he accepts it as a fact of life.   He explained that when the crossing would begin through the new shed there would be four turnstiles operating instead of only one.   We looked inside the new shed.  Maybe it would operate well, but it looked bad.

16:30 – We drove home through the city of Harish, where many construction workers earn a living. 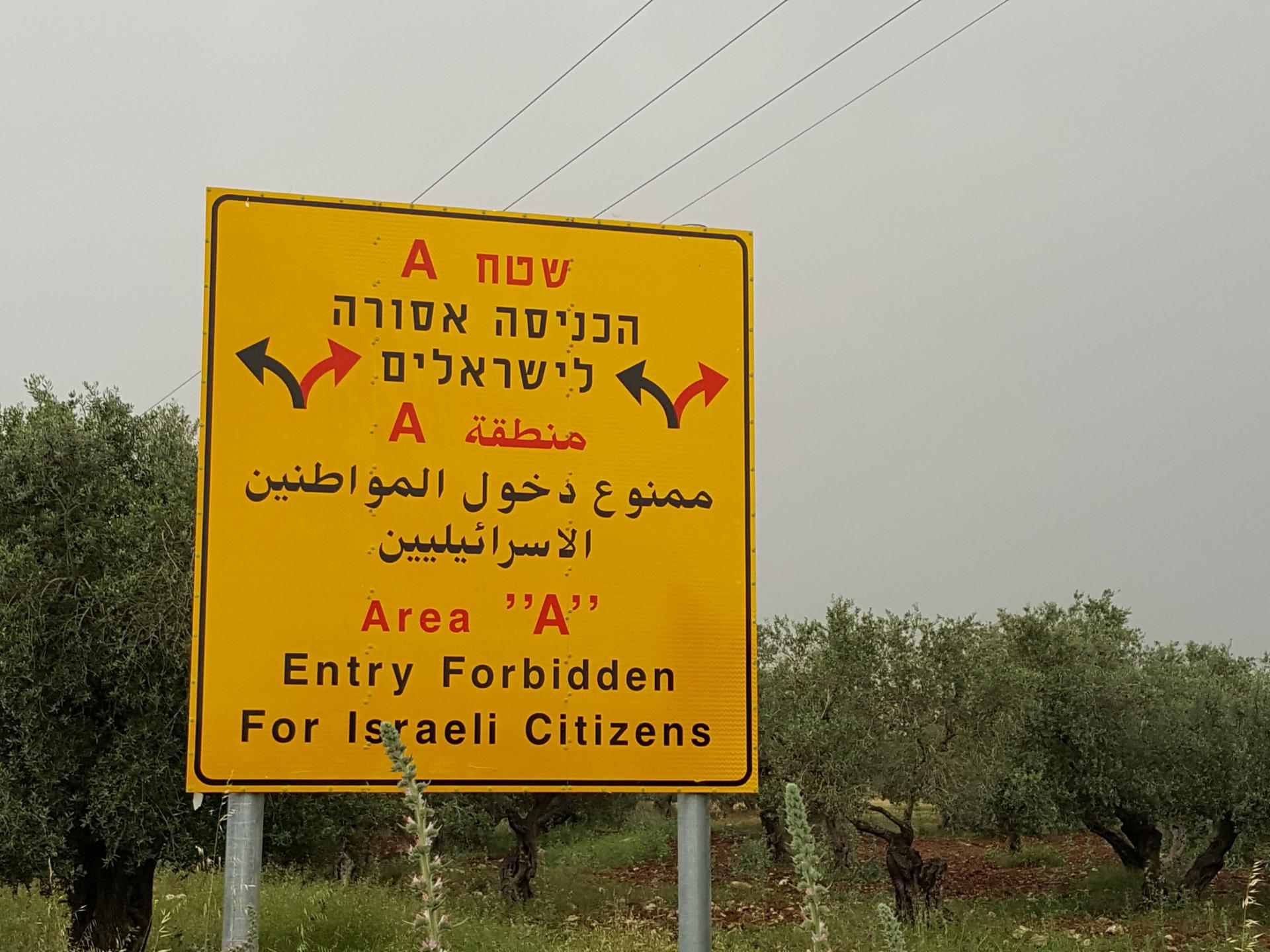 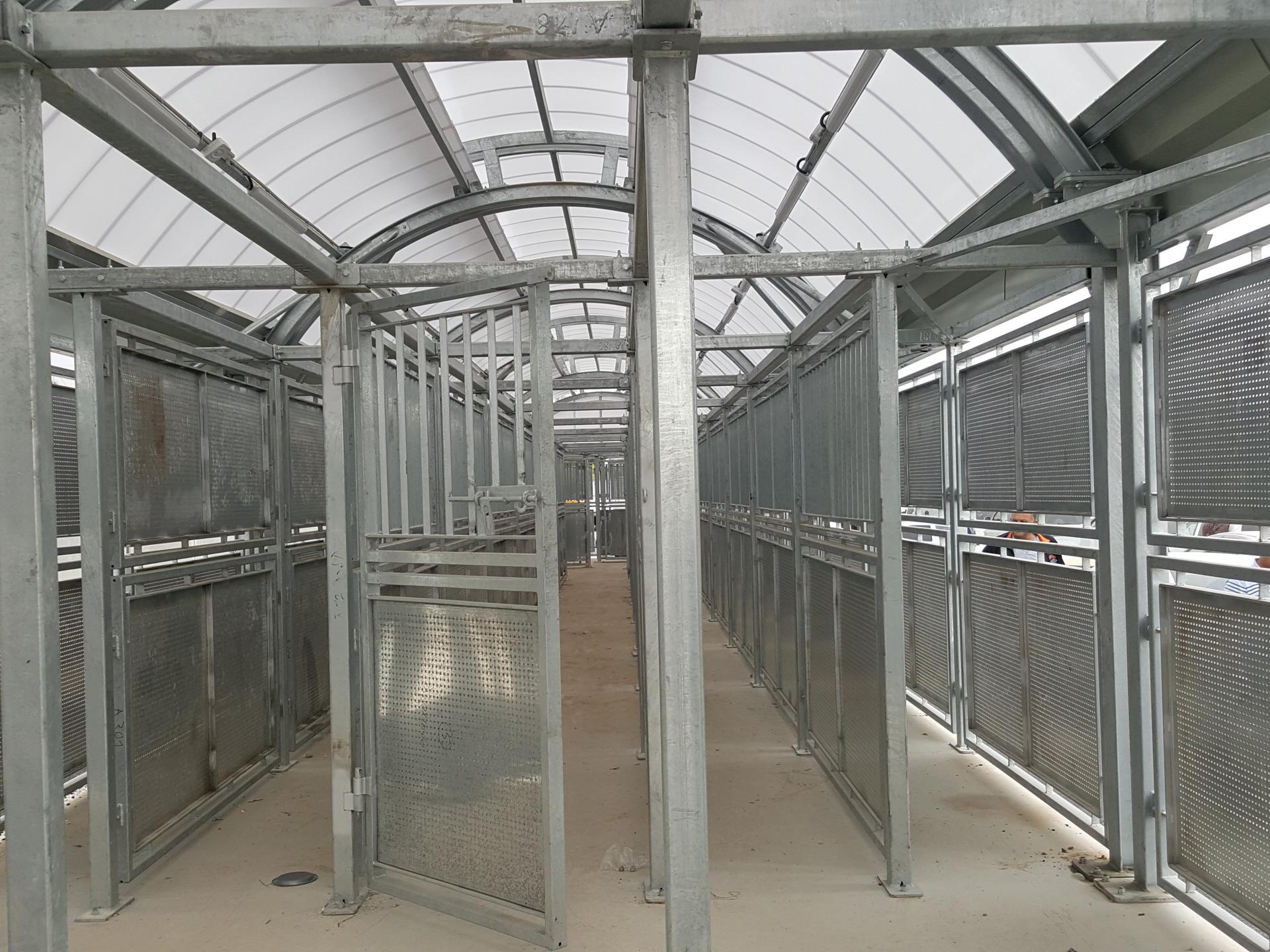