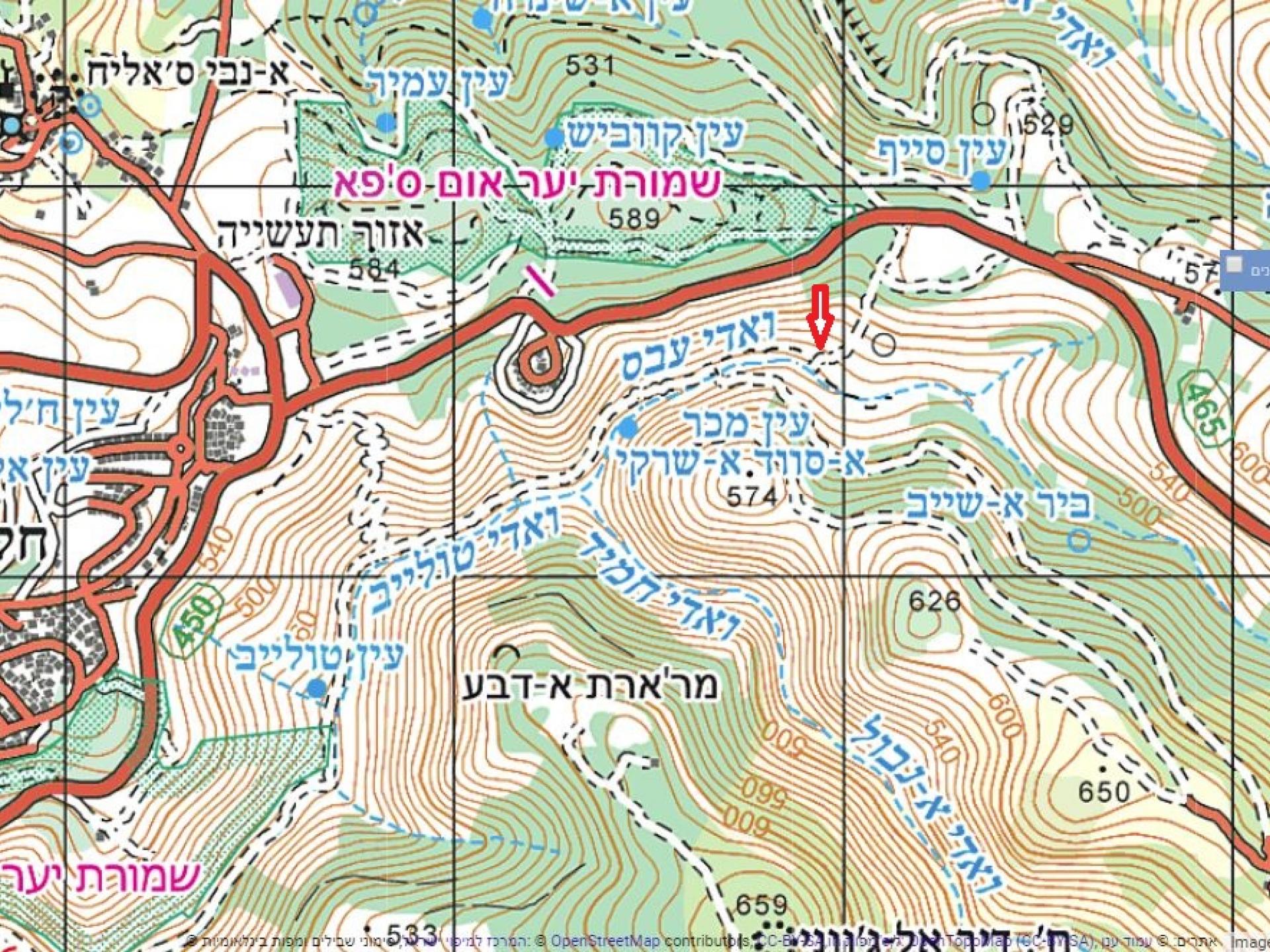 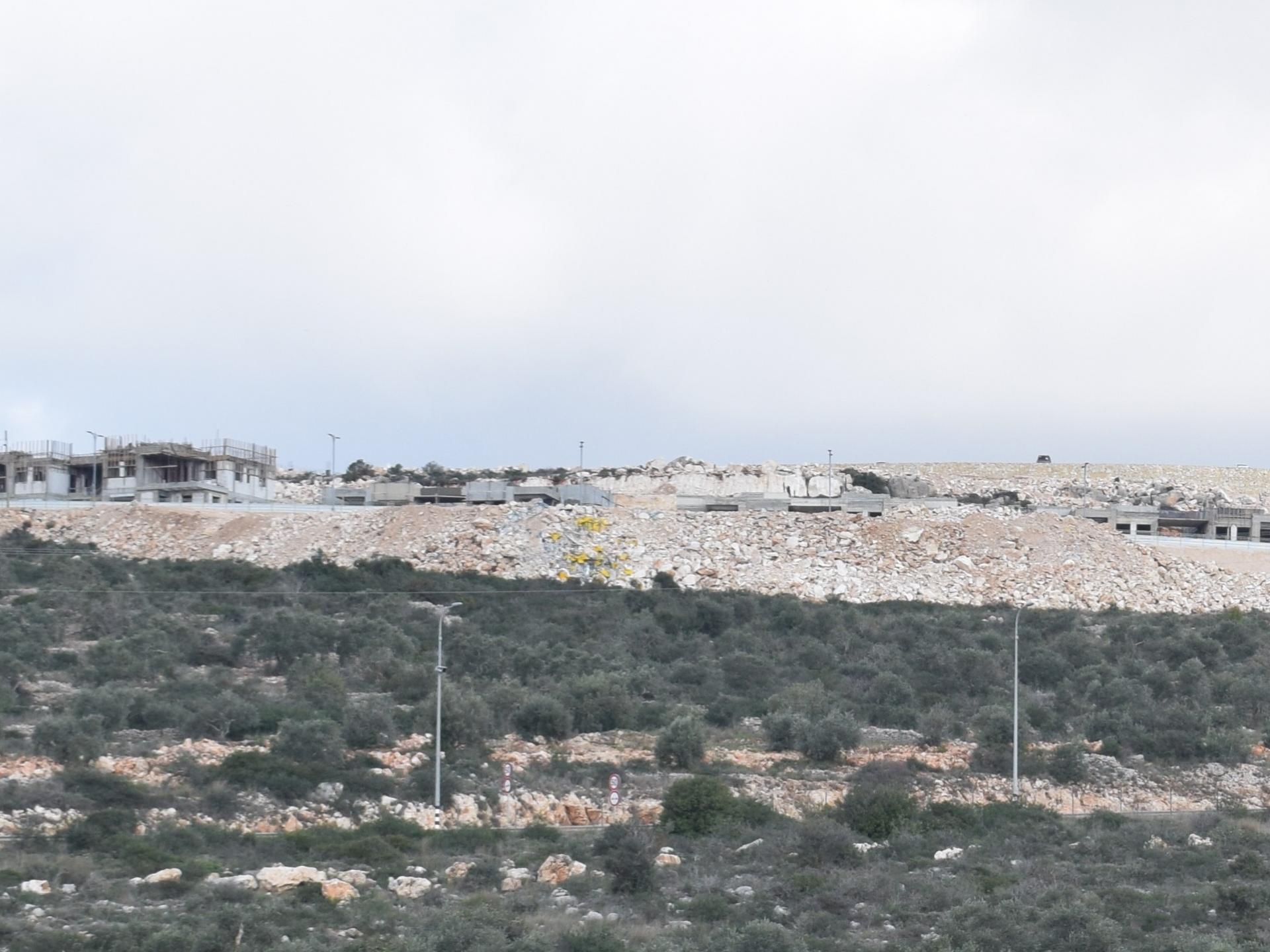 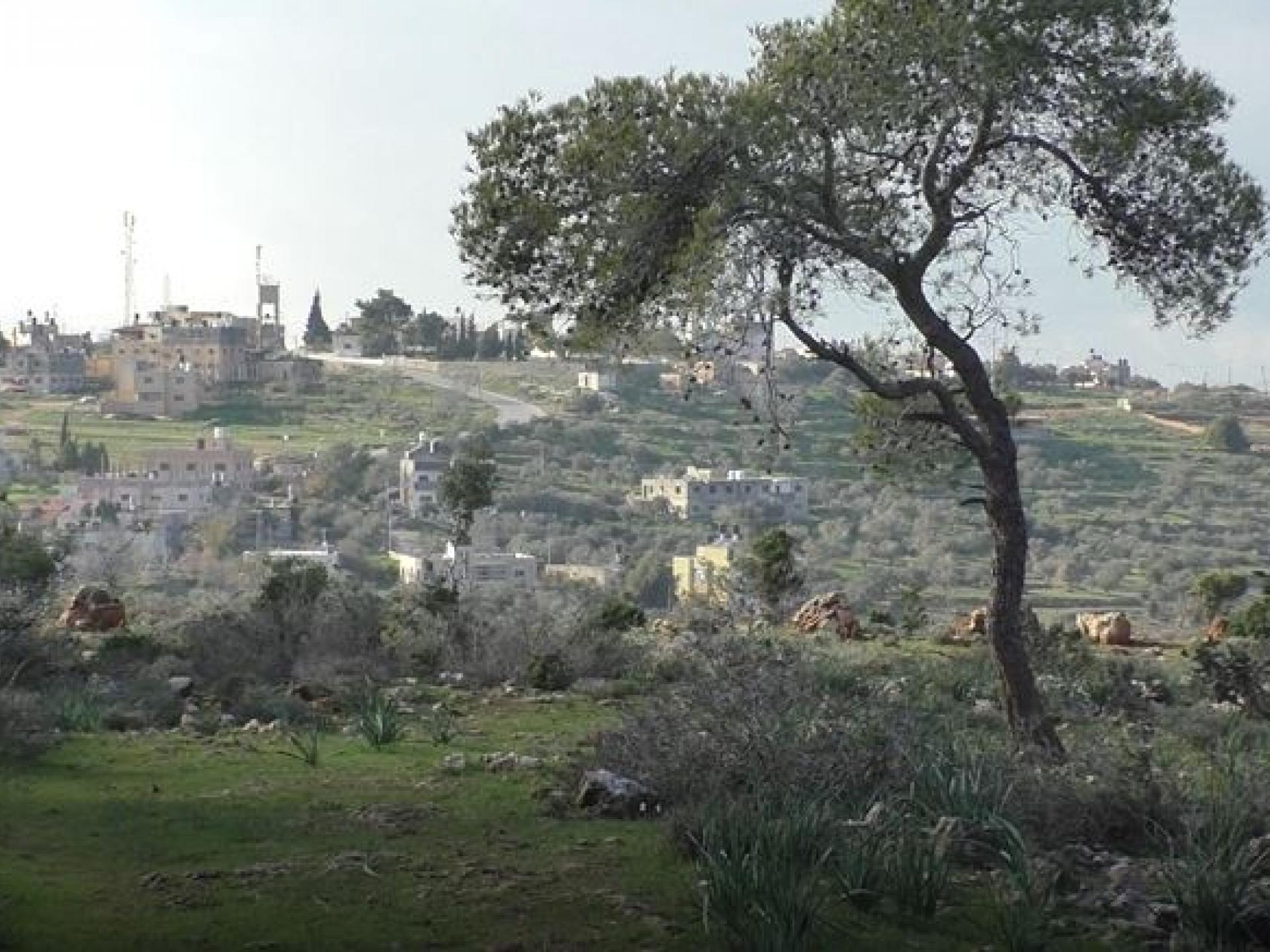 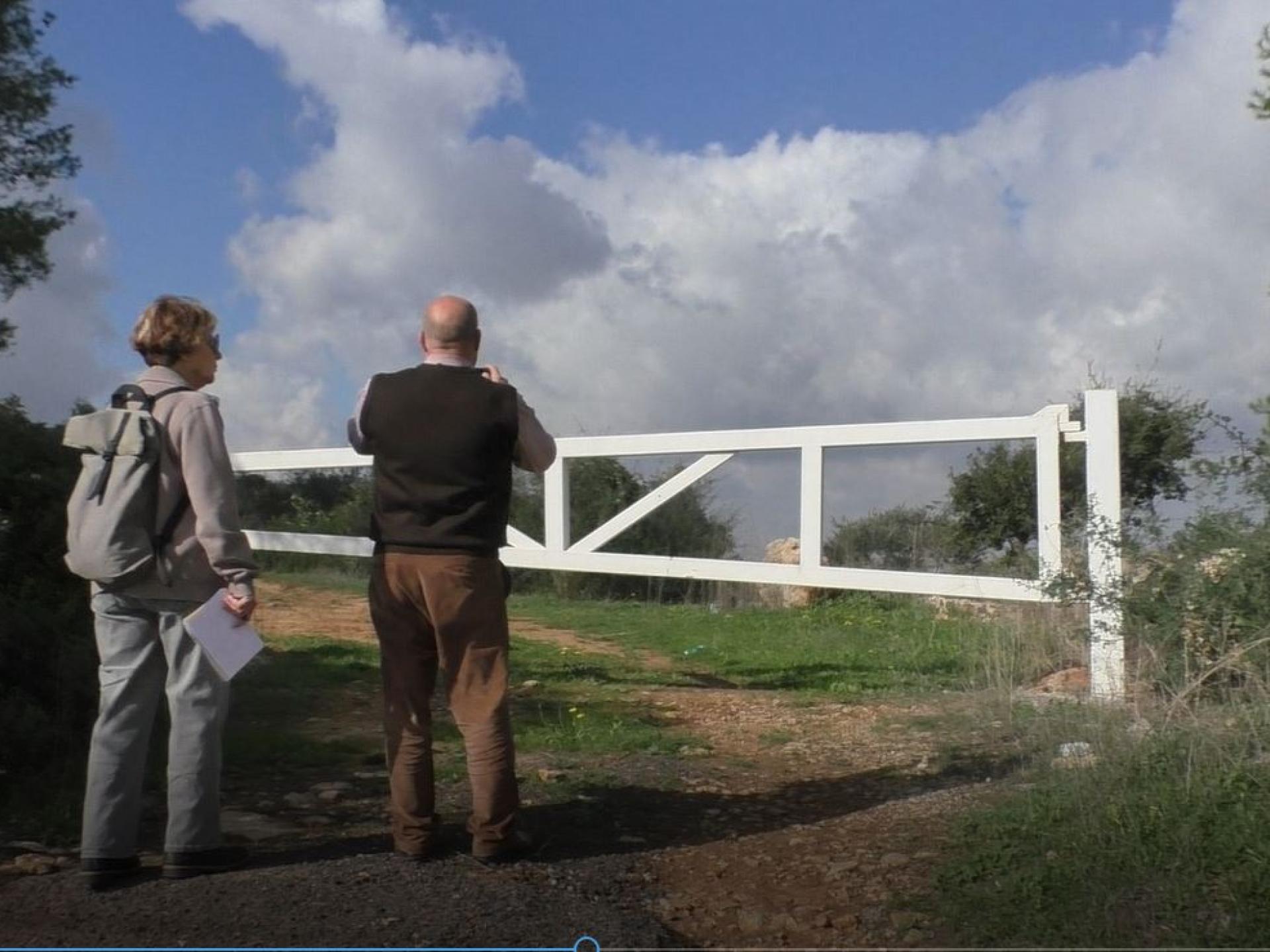 In the wake of the urgent letter dated 23.12.18 from attorney Neta Amar-Schiff to the Legal Advisor of the Civil Administration’s Judea-Samaria region, we telephoned Mr. Naji Tamimi so he could guide us through the area.  Settlers are constructing a new road on lands belonging to residents of Jibya and Umm Safa, adjoining Nabi Salah.

We began our Monday shift earlier and see what’s happening with our own eyes.  We decided to enter Nabi Salah through the back road to avoid soldiers or checkpoints along the way.

Brukhin settlement – we could see new construction from the road.

Burqin – schoolchildren in the streets.  Apparently the New Year vacation has started.

We arrived at N’s home in Nabi Salah.  The last time we were here, a year ago, there were plans to build a fence around the maqam/community center and plant a garden, but it turned out that the village lands were not registered in the tabu, and even though construction was to have been on Waqf land everything has been delayed until the lands are registered.  N. says it will take a few more months.

There are plans to add another storey to the school (7 rooms) and to enlarge the twelfth grade classroom.

In reply to our question we learned that highway 450 is always blocked and vehicles are stopped.  Last week the road was closed completely and drivers were forced to seek alternate routes.

On N.’s table were certificates of commendation for his daughter who’d been arrested, presented by protesters at the American embassy, from relatives in Hebron and from Fatah:  “…Until the liberation and the establishment of a Palestinian state with its capital Al-Quds.”

We went to see the road being created by the settlers in the area between highway 465 and “Ein a-Tuleib” wadi, as the locals call it.  Driving on highway 465 we crossed an area N. pointed out, saying that it belongs to him and work has been underway there recently which he knows nothing about.  No one asks.

The “Elisha” preparatory school is located on Umm Safa’s land, while the Halamish settlement is on Nabi Salah’s land.  Halamish sits on the ridge, and work has begun on a road 2 ½ kilometers long along the eastern slope of the ridge.  According to attorney Neta Amar-Schiff’s letter, “Last week residents of the villages of Jibya and Ein Safa saw settlers had begun constructing a road from an area known as Mukur Swad, the location of an ancient spring, toward Ta’amirat el Hilu and back to Mukur al Swad, so that it encompasses approximately 500 dunums around Jabal al-Qastel.”  This is the same area in which they tried to construct an illegal road nine months earlier but the Civil Administration ordered them to stop.  “Construction of the new road for the use of the settlers effectively denies Palestinian access to the ancient spring that is central to the lives of area residents…The Halamish area contains a number of well-known natural springs which have been closed to Palestinians because of the presence of settlers and their constructions nearby…the road being constructed circles the hill known as Jabal al-Qastel, containing lands worked by their owners, olive and fruit trees, and is the site of traditional family and cultural activities…The settlers’ presence transforms the area of the hill into a region to which Palestinians are denied access because of so-called security considerations.”  On the 20th and 21st of this month small bulldozers and workers were still observed in the area but we saw nothing on our visit.  Apparently work had been stopped again as a result of Neta’s letter.

N. believes, and we think he’s probably correct, they intend to link the road from Ateret to Halamish.  The work is prohibited for now, but they’ll wait for an opportunity such as a shooting or another type of attack and will continue until they get what they want.  They’ve already stolen 1200 dunums from the villages of Nabi Salah, Umm Safa and others.  And they’re still at it.  The Umm Safa nature reserve is till open to Palestinians, but who knows how long it will remain so.  N. sees no light at the end of the tunnel.  “They want to steal all the land from Ateret to highway 443, more than 100,000 dunums, and another 150,000 toward Nili to the west.  They want to control all of Area C, the conflict won’t end, we won’t be forced out, and meanwhile both sides continue to pay a heavy price.  It will end with the closure

of both highway 450 and highway 465, the villagers won’t be able to use them but will be directed to underpasses built under the highways which will lengthen the trip to Ramallah – instead of 3-10 km, we’ll have to make a 50 km detour.”

We asked about the Umm Safa nature preserve.  N. suggested we go there so we walked through the preserve for about 2 km.  A glorious Mediterranean woodland, completely green as a result of the rains, oaks, terebinths, pines, arbutus with its sweet red fruit, asphodels, narcissus, crocuses, star hawkbit, cyclamens that hadn’t yet flowered, boletus mushrooms no longer edible (because the edible ones had already been picked immediately after the rains).  And many other plants N. pointed out enthusiastically and identified by their Arabic names and salvia and other edible plants and those used to make tea, and cyclamen leaves to be stuffed – like grape leaves.  And thorny burnet, which is said to be impossible to uproot.  We watched this man born from the earth, who from childhood had accompanied his father through the fields, had breathed the air of his homeland and of its earth.  We understood that “tsumud” is not a political slogan but is rooted deep in the soul.  These people are planted and rooted in the landscape, know each stone, each plant, each tree, they’re an inseparable part of this place and no force can overcome that spirit.

The Umm Safa grove was originally planted and developed during the British Mandate (1930).  Part of the area was given to Fai’z Bek, whose abandoned home still stands within the preserve, and whose olive grove is worked by a man from the village.

We walk along a path with Nabi Salah’s lands to the west and Umm Safa to the east.

85% of Nabi Salah’s buildings are in Area C, and the rest in Area B.

On our way back – armed soldiers at the main entrance to Nabi Salah lie in wait behind a high wall with weapons pointed.  But we didn’t see at whom.

Many soldiers also at Deir Abu Mishal manning a checkpoint and inspecting everyone entering or leaving.