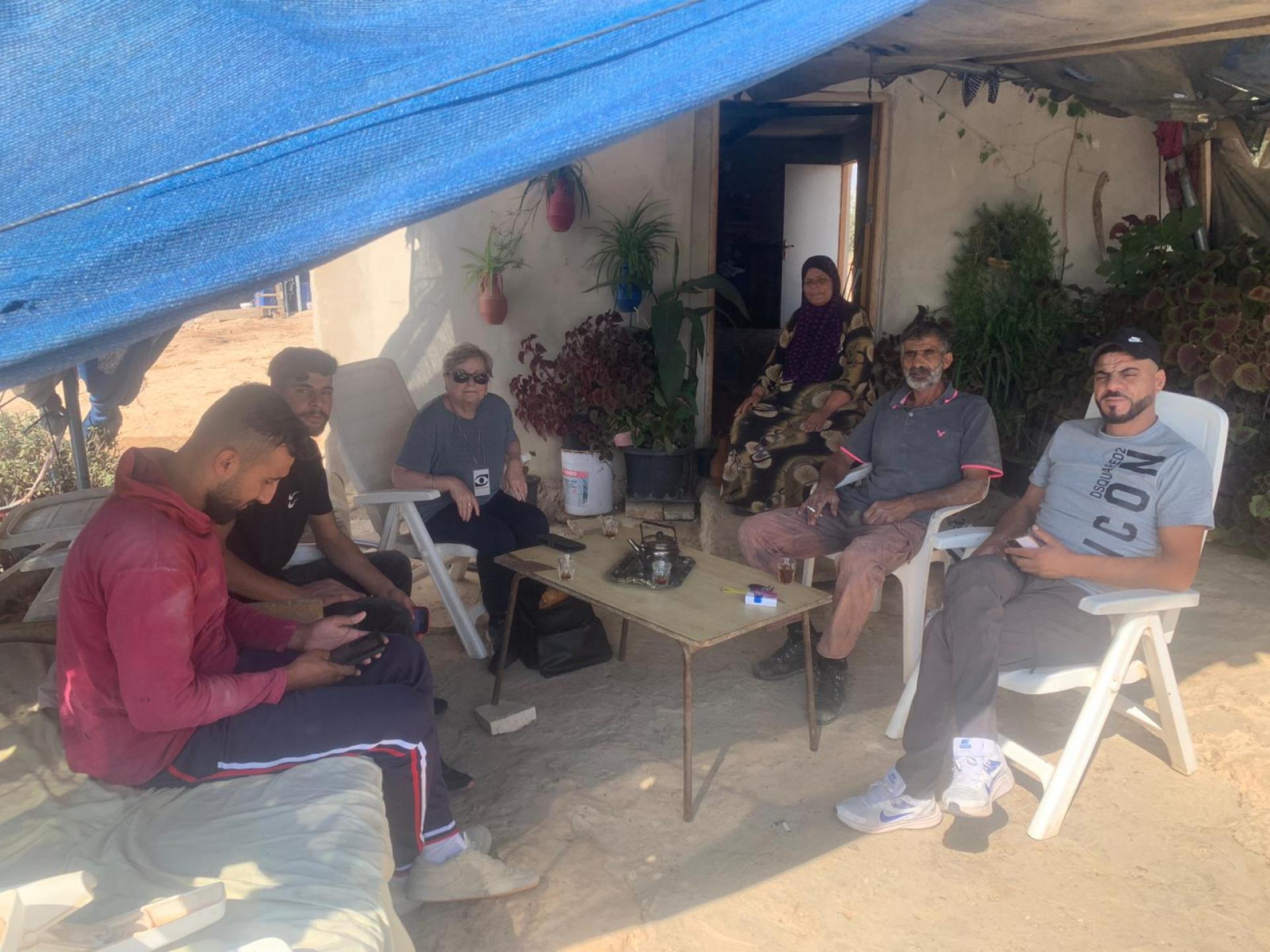 Susiya - at Azam and Wadha's and family 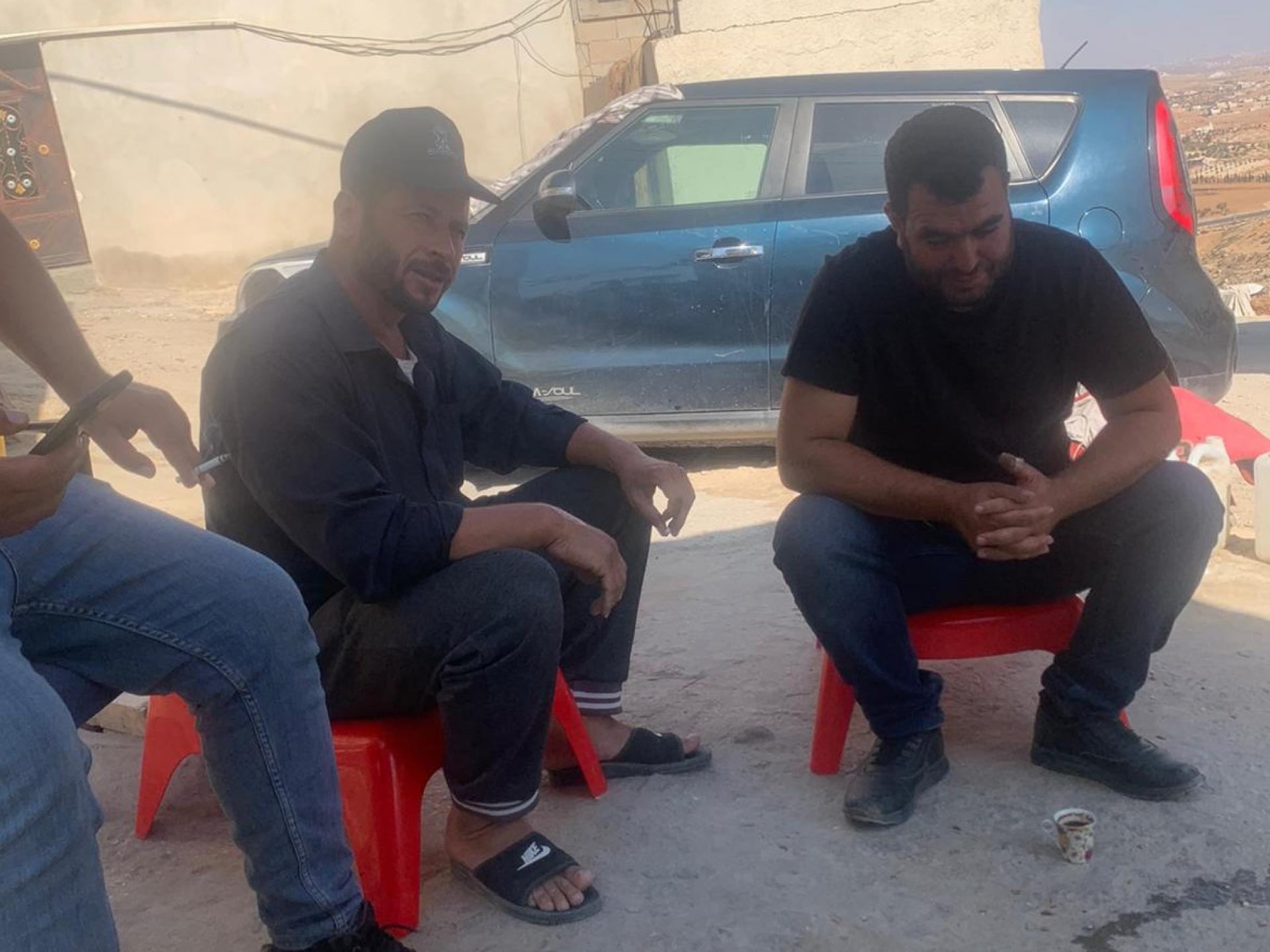 Turning right from the checkpoint to road 60, where there had been a military tent that was recently taken down, a number of soldiers under the trees.

Further on, a little before Zanuta, on the right side of the road, 2 female soldiers are near a small tent which they had set up.

Some of the earthen embankments that closed the entrances to all Palestinian villages, starting at the beginning of the year, have been removed.

In Wadi Jahish , the village which dozens of settlers invaded during Sukkot and destroyed several tents of the local residents, the tents that have been erected anew can be seen.

A concrete pump stands at the entrance to the settlement Susiya - evidence of a construction. The tanker that brought the concrete left the settlement's gate when we passed by.

In A-Tuawani we met Nasser Nawaja’. He receives a call from a resident of Bani Na'im who told him that settlers from the settlement Pnei Hever had stolen the olives that were harvested and had destroyed 25 olive trees. Donors are making sure to bring in new trees, but it will take years for them to bear fruit.

We met Nasser Nawaja’ wife's mother and his sister-in-law Shug (who speaks English). We had a short conversation and promised to keep in touch. She had studied English at the school in A-Tuawani, and once a week she received reinforcement from some Israeli volunteers who stay there frequently.

From there we continued to Susiya, to Azzam and Wadha. As usual we were received with joy. Azzam has not been working for about two weeks but will resume soon. The reason is that the contractor finished work in Ramat Gan, and will move to Dimona. Azzam says he has no choice - he has to work despite severe back problems.

The extended family is often there. They are visiting and assisting in the agricultural work.

One of the sons helped financially, but the Corona period destroyed his business where he had been making a good living. (He had to sell three large tractors).

Last Friday, Azzam returned from Meitar crossing. There were settlers who prayed as well as policemen and soldiers. At the entrance to Susiya there was a group of young settlers from the settlement. They had chains and clubs and were about 20 meters away from him. They cursed Azzam, but he made sure not to pay any attention to them. He entered his house and was very careful so that they should not throw anything at him. Some of them entered the area of his house, but he warned the neighbors and they stood outside. Finally the settlers left. It passed peacefully, thanks to Azzam's restraint and self-control.

Last Friday, news was received from the group "Bnei Avraham are returning to Hebron" that Abu Anan Jabari, who lives between Kiryat Arba and Givat Avot near the Hazon David Synagogue, is planning his olive harvest on Monday (today) and is asking for the assistance of Jewish volunteers. But it was canceled because the occupation authorities informed him last night that it was impossible.