The table Micki gave us indicates when the seasonal checkpoints are open at Haris, Kifl Harith and Qira.  We went to see whether they opened.  The three villages are in the Salfit sub-district.

We stopped first at our friend’s in ‘Azzun.  We gave him parcels and were pleased to see he’s much better.  He’s ready to return to work and is looking for an appropriate job.  Silvia’s group is working on cancelling the blacklisting.

Deir Istiya (15 km. south of Nablus).  A military command-car at the entrance which is completely blocked by huge concrete blocks.

Haris.  We met T., the head of the council, at the municipal building.  There are two entrances to Hars – one to only 20 houses and the other via Kifl Hars.  There are 4500 residents who own 5000 dunums.

The entry gate to the village opens and closes arbitrarily, with no advance notice to the residents.

A seasonal gate opened on days that it rained and no one went to the fields.  They plan to apply again to the Palestinian DCL.  They’re annoyed (no surprise…) they must apply to the occupier in order to reach their fields.

2500-3000 dunums were stolen from the village to establish the Revava and Kiryat Netafim settlements to the west.

The village center is Area B, surrounded by Area C. The population grew and the need for new housing forces them to build on their land.  But the occupier thinks otherwise.  Five buildings received stop-work orders last week.

Their inability to build houses is one of their serious problems.

The army regularly enters the village at night.  The noise of the military vehicles frightens the children and none dare throw rocks.  Fear paralyzes them.

Settlers from Revava come to their lands accompanied by soldiers and chase away the Palestinians.  Work in the fields is stressful and they’re afraid.  They painfully recall the days when the olive harvest was a family festival, and they worked joyfully.

We drove to see the road to the twenty buildings belonging to the village which have been blocked by concrete cubes. 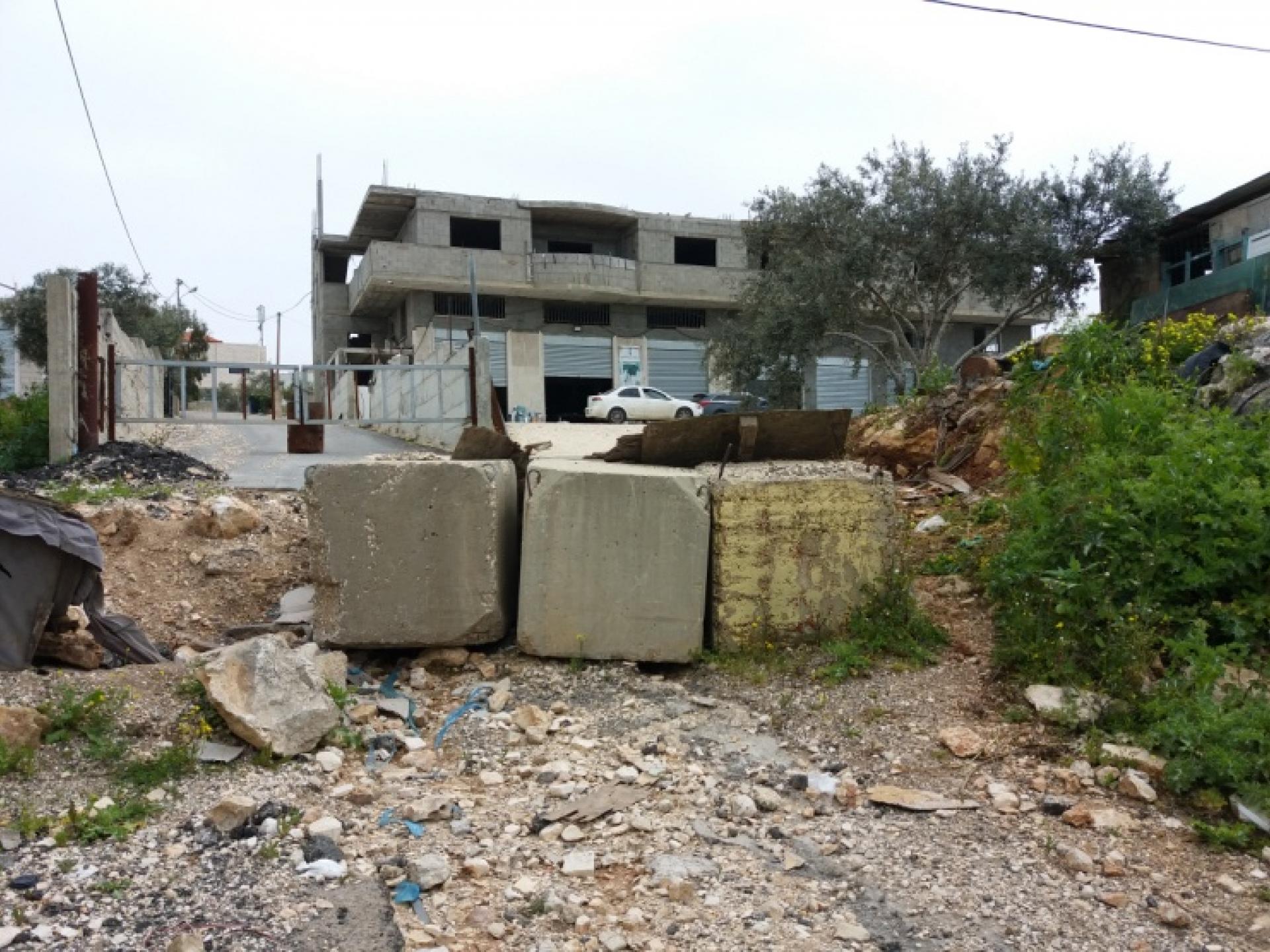 Shops and a gray iron barrier 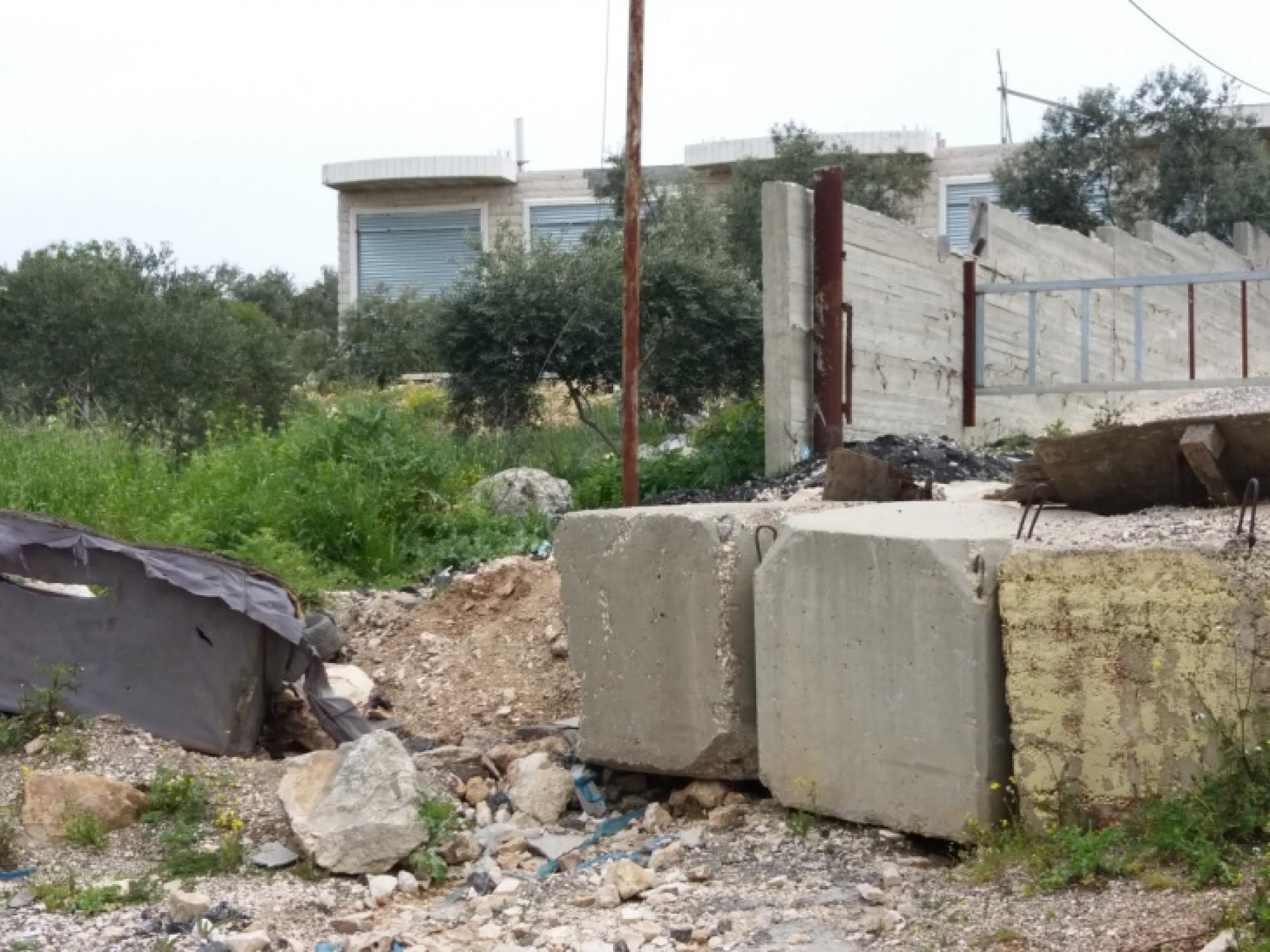 One house to which the road was blocked

Six months ago the IDF destroyed their road (which they had themselves paved and paid for back in 1982), that had linked to the main road.  The photo on the right shows shops, and to their left a gray metal gate, and the homes are in the left-hand photo.

The shopkeepers can’t unload merchandise, and access is blocked to the homeowners.

We met Q., who owns a shop selling aluminum and glass.  He says he brought a tractor and removed the concrete blocks.  The army came the next day, returned the blocks, and that happened a number of times.  Finally police from Ariel arrived and threatened to arrest him.  The head of the Barkan municipality, who lives in Nofim (a settlement northwest of Ariel) got involved.  What right has he to harm my ability to make a living, Q. asks.  People from Barkan come monthly and photograph the blocked road to ensure no one has moved the blocks. 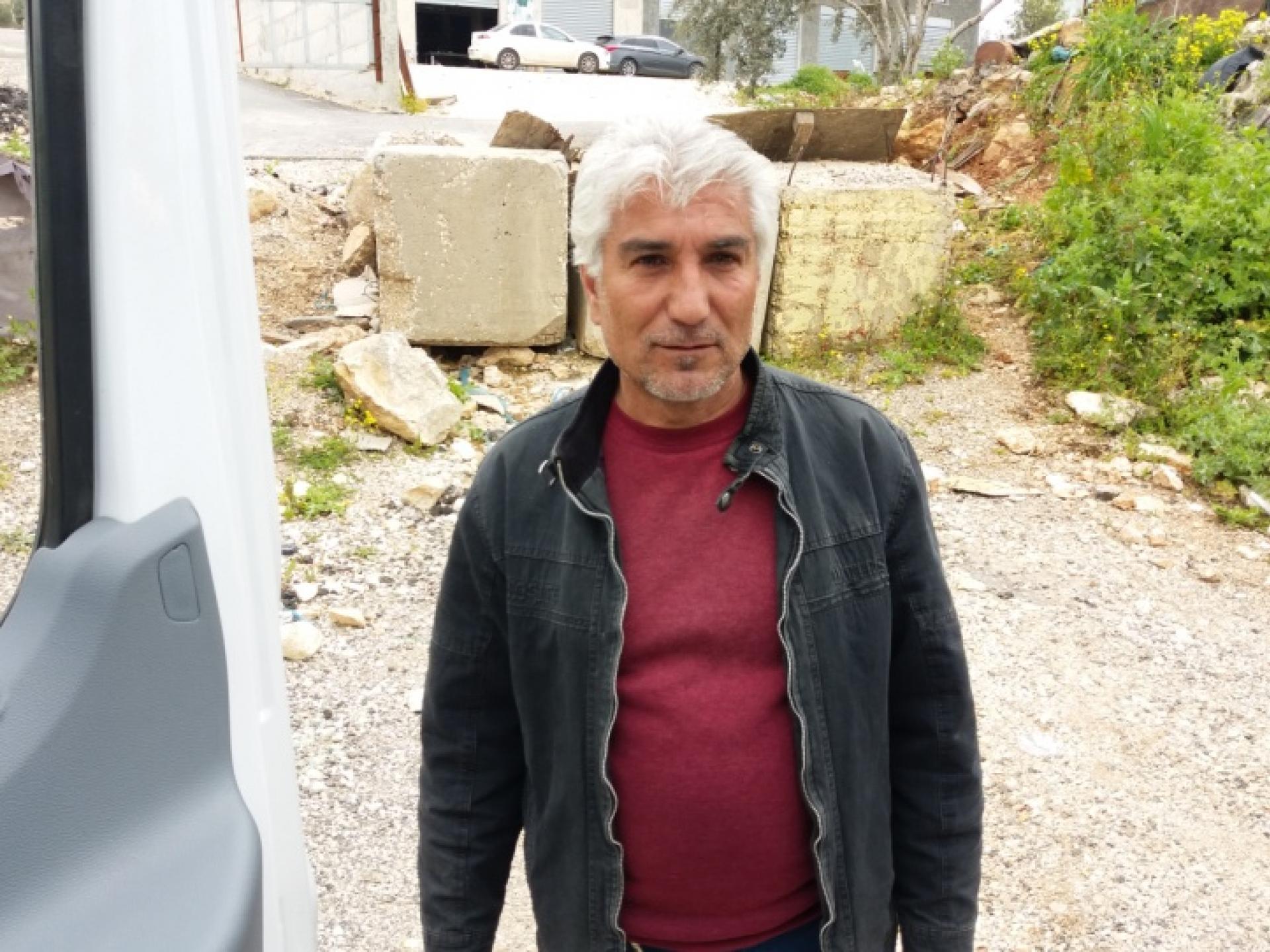 Owner of aluminum and glass shop 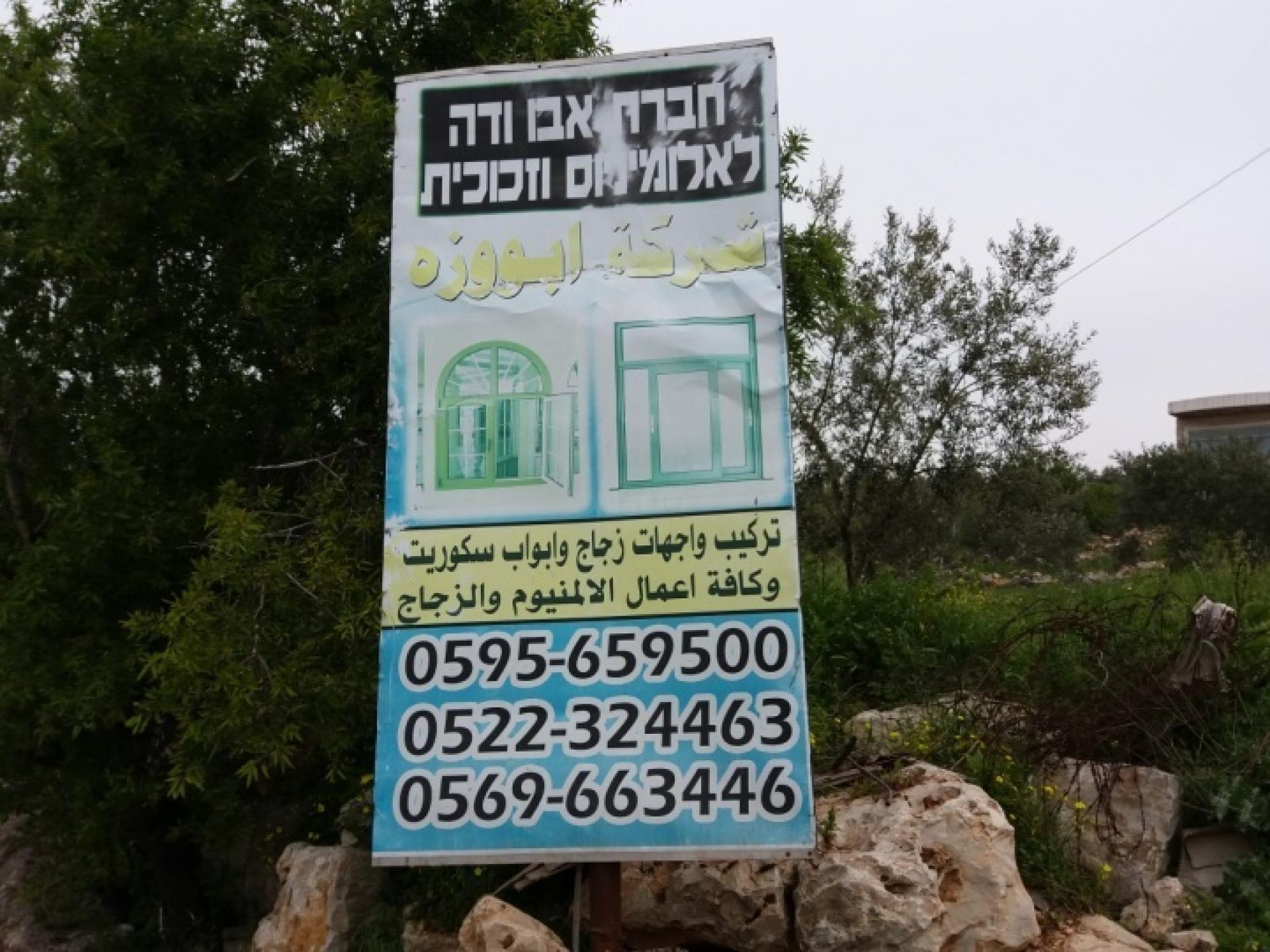 Armed soldiers at the Barkan junction.  A police car at the entrance and a yellow sign, “No entry to Israelis.” 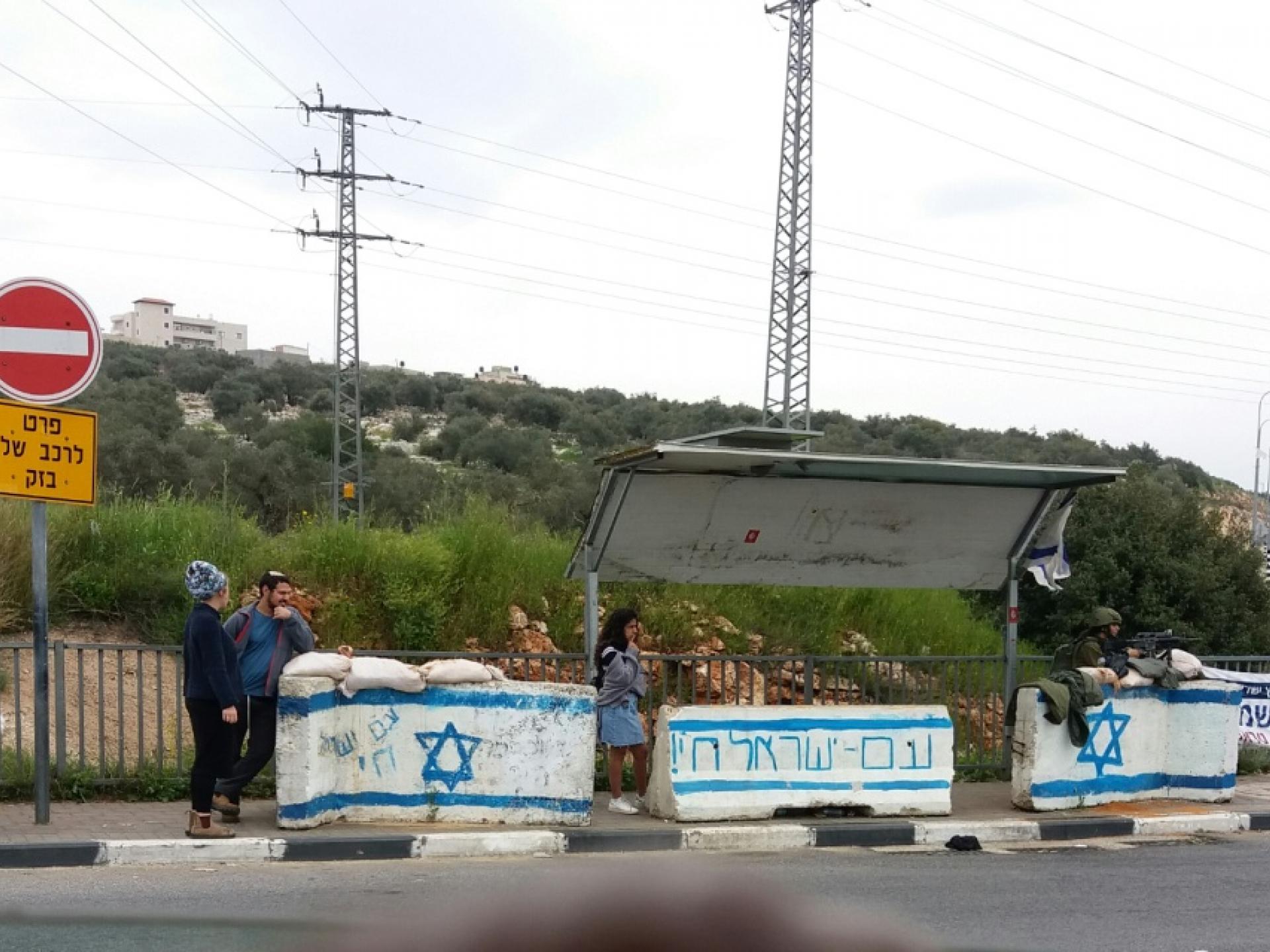 There is no transition to Israelis 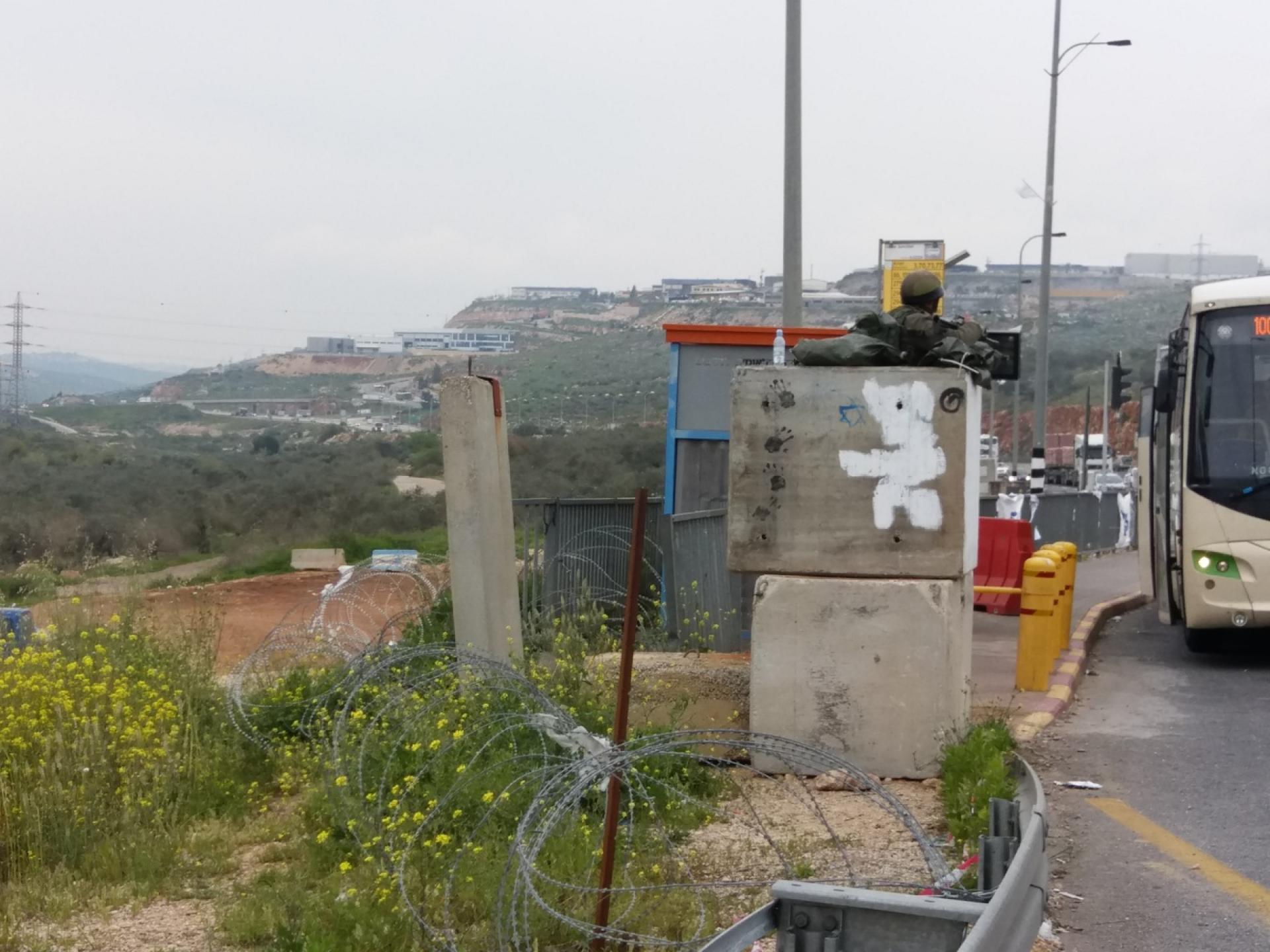 We continued east to Kifl Haris.

We met the administrative director at the municipal building.  Part of the village is in Area B; most is in Area C.

They own 3500 dunums.  1200 were stolen to build highway 505 and some for the construction of the Ariel settlement.  Once their land reached Salfit.  A hotel and gas station were built on their land.  They can access their land whenever they wish because there’s no fence.  How is that possible?  Are there no checkpoints?  Well, the settlers, the lords of the land, must have access to the makkamat – which the villagers consider sacred – because they believe Joshua ben Nun and Caleb ben Yefuneh are buried there.

On the night of Wednesday, 20.3.19, the settlers came to celebrate loudly and noisily until 7 the following morning.  On their way to the party they usually ring the doorbells of the homes and wake their inhabitants.  The children wake crying.  Children in first, second and third grade still wet their beds.  The army always escorts the celebrants and protects them, and during those hours no one comes or goes.  About a year ago a woman giving birth didn’t reach the hospital because of the curfew and gave birth in the car.  She still suffers from trauma and is being treated by a psychologist.

The article in the settlers’ newspaper about the celebration noted that 12,000 people participated.  A long line of military jeeps escorted them.  Soldiers preceded them to check and prepare the area.

All these evil acts are carried out under the army’s auspices.

How often do they come?  In 2018 the rioters came 18 times, in 2019 they’ve already come 4 times.  Small groups also arrive frequently, without military coordination.  Small groups are also a big nuisance.

– in other words, theft of much more land.  At this stage the Palestinian Authority objects.

The army arrives frequently.  The soldiers provoke the residents, force them to close their shops, stop people and vehicles.  The harassment never stops.

Water and electricity – no problems.

Many of the Palestinians have land within the borders of Ariel, including our host.  The army infrequently allows him to access his land.  But without constant work there’s no fruit.  Land must be cultivated, he explains.  Since the olive harvest he hasn’t been to his land even once.  He submitted applications which weren’t granted.

We drove to Qira via Kifl Haris.  The two villages almost touch each other.

A., the head of the municipality, wasn’t in his office but the secretary welcomed us and shared the little information she knew.

The village has 1200 residents.

All the village is in Area B.  All its lands are within the village because it’s surrounded by the villages of Marda and Kifl Hars.

The army enters the village infrequently.

Water and electricity come from Israel.

Sometimes the electricity stops for a few hours.

We exited to Highway 5 and returned to Tel Aviv.

The village has 4,500 people and they have 5,000 dunams of land. The entrance to the village is blocked and opened arbitrarily, without informing the residents.The village has a seasonal checkpoint that blocks the road to the agricultural land and this checkpoint opens once a year! 2,500-3,000 dunams were stolen from the village in order to build the settlements of Revava and Netafim, which are located west of Haris.

The center of the village is Area B and around Area C. The population grows but the occupation does not permit new construction in Area C.

This is a Palestinian located north-west of the settler-colony town of Ariel, 18 kilometers south of the city of Nablus. It numbers 3, 206 inhabitants, as of 2007. 42% of the village lands lie in Area B, and 58% in Area C. In 1978, some hundreds of dunams of the village’s farmland was sequestered in order to found the settler-colony of Ariel – in total 5,184 dunams from the Palestinian communities of Salfit, Iscaqa, Marda, and Kifl Harith. Dozens of square kilometers were also confiscated for paving road no. 5 as well as road 505 and their buffer zones, and the Israeli electricity company’s power station. Over the years the village has suffered harassment by sometimes-armed settler-colonists, even casualties. In 1968 the army’s rabbinate ruled the maqam site Nabi Yanoun (sanctified grave of the Prophet Yanoun) is in fact the tomb of Joshua, Son of Nun. Another structure in the village, named Nabi Tul Kifl by the Palestinians, has been identified by the Israeli authorities as to the tomb of Caleb, Son of Yefuneh. These sites are located in the heart of the village, near the mosque, and at times of Jewish religious festivities and pilgrimages, the center of the village is illuminated by projectors and thousands of Jews arrive, protected by hundreds of Israeli soldiers. During such a period, a night curfew is imposed on the village and the villagers are forced to stay shut inside their homes.

This village is located in the Salfit district of the northern West Bank, 19 kilometers south-west of Nablus. The village population numbered 1,387 as of 2016. 97.6% of the village lands are categorized as Area B, whereas the 2.3% remaining are in Area C. The Separation Fence erected around the settler-colony city of Ariel separates Qira from its local town Salfit, and necessitates a detour of about 20 kilometers.

In 2010-2015, the women’s center in the village held meetings and workshops shared by the village women and children with members of MachsomWatch.