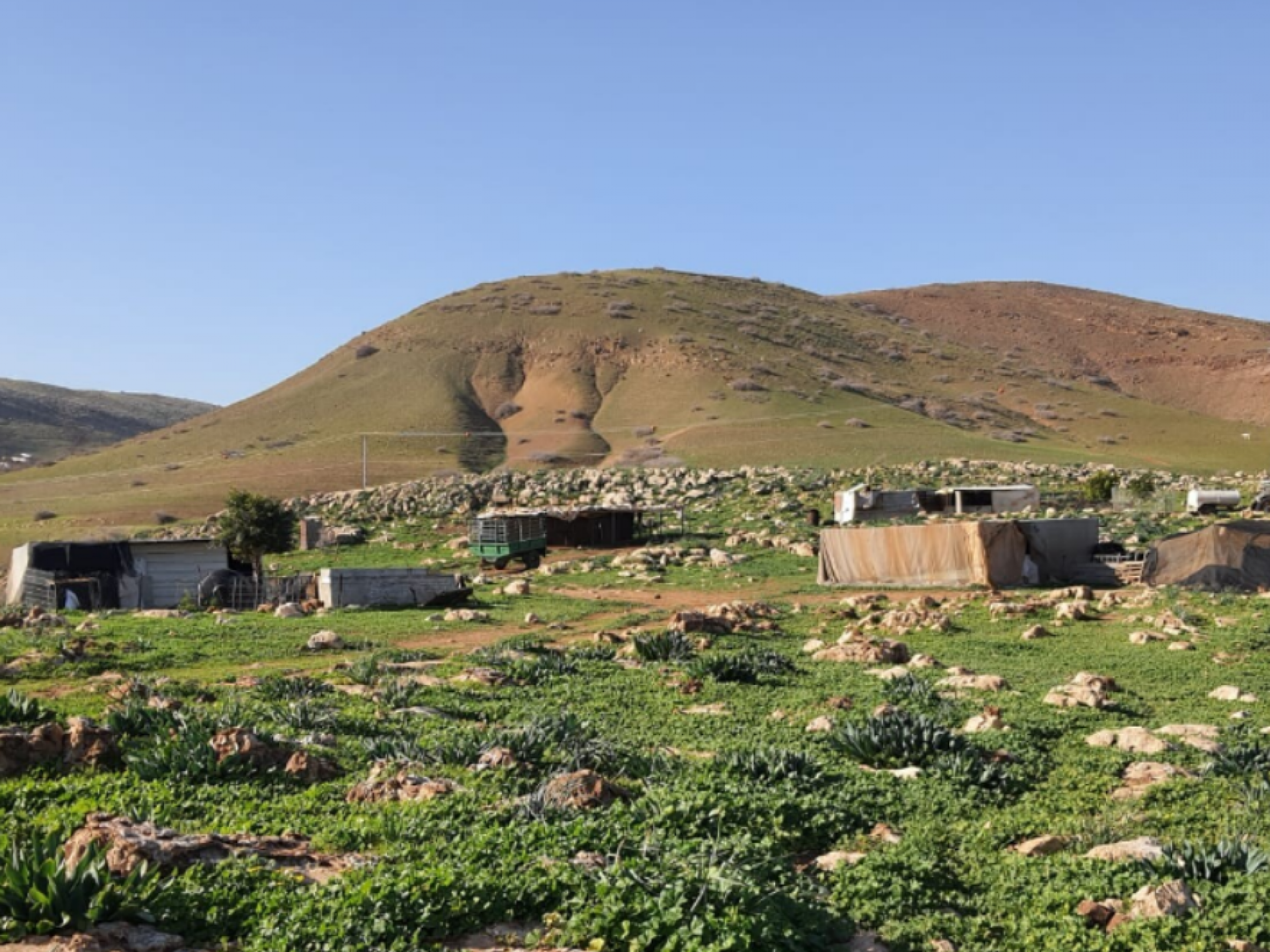 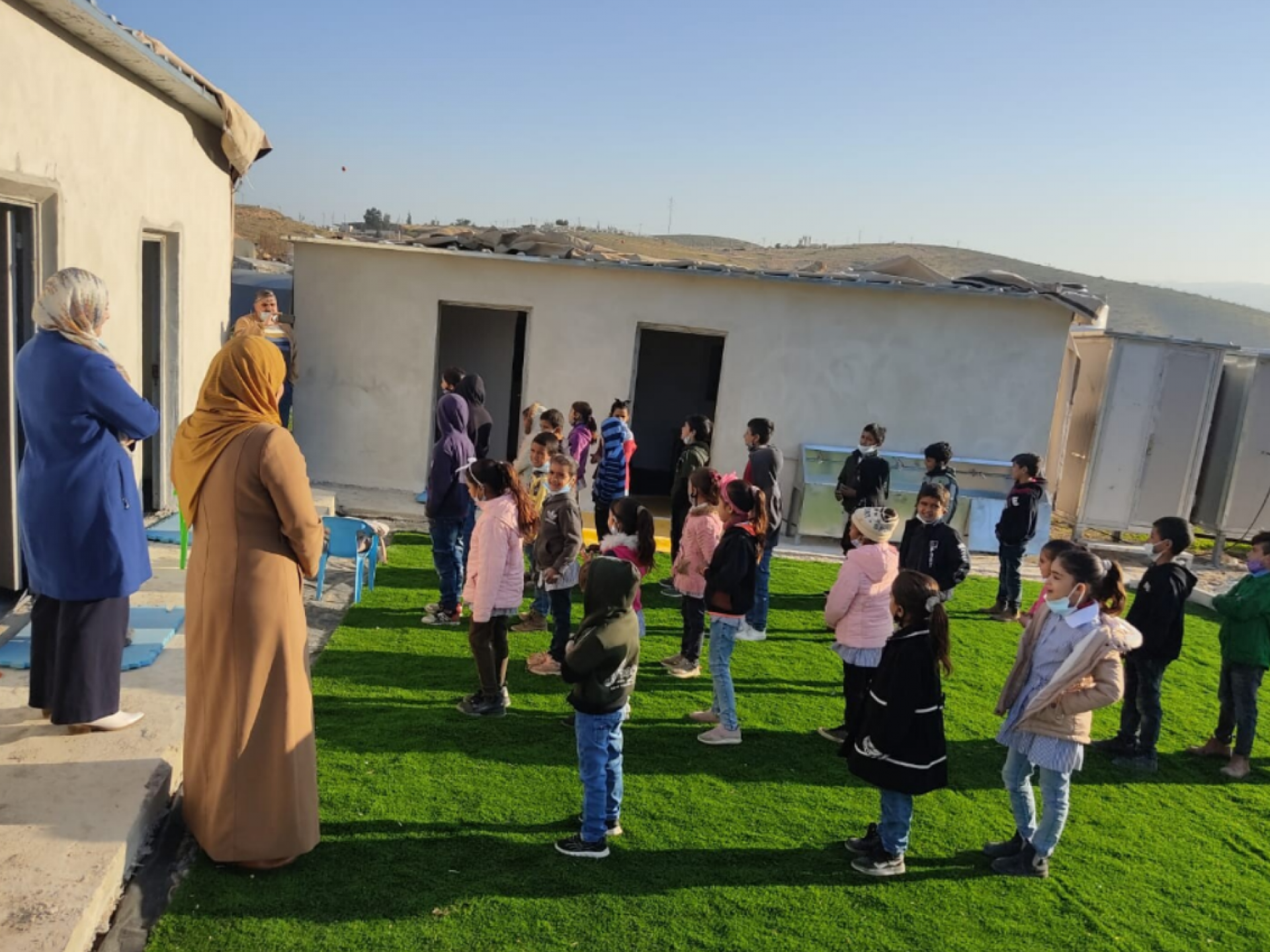 Hammam al-Malih, Jordan Valley: Activities in the school yard. The school is facing demolition by the Civil Administration

The school in Hamam al-Malih during an activity in the yard. The school is facing demolition on behalf of the Civil Administration 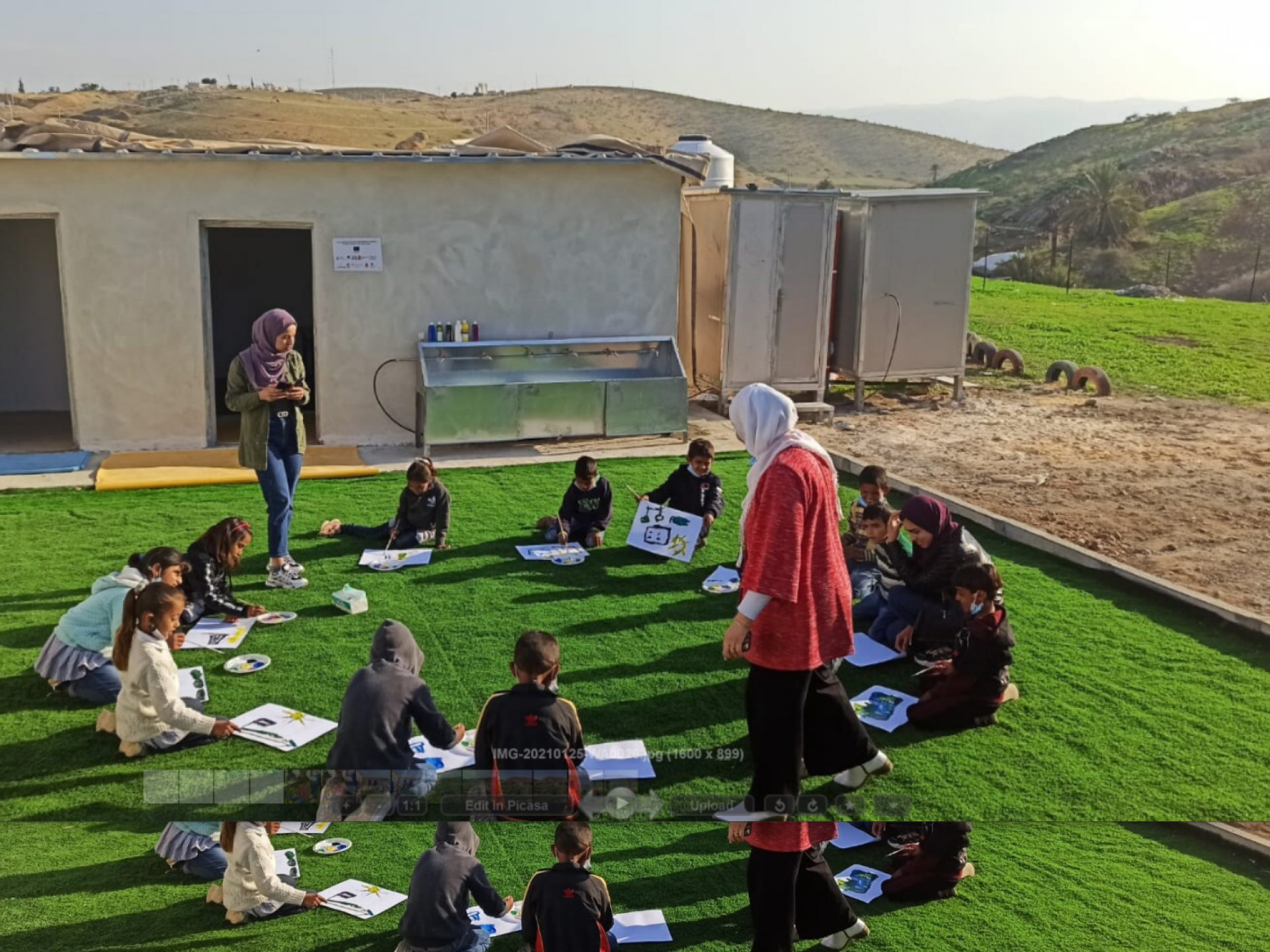 Hammam al-Malih, Jordan Valley: Pupils in an educational activity in the school yard which is facing demolition

About 2 years ago I heard that Rachel A. wished to found a kindergarten for the children of the Palestinian Jordan Valley shepherd communities.  Their problem is that although there is free schooling for children from 5-years of age and up, some of the shepherd children do not get to realize this for they depend on kindergartens and their vacancies in neighboring communities. Costs and transport pose another problem. Who would organize this, and who would bear the expenses? Thus quite a few children have reached 1st grade without any prior schooling, having spent their first 6 years in the tent with their family members and flocks – this is the only world they know, their situation inferior to other children from the very start. Most parents cannot help their children with their homework. It is a known fact that the first years of school are the most important for a child, and therefore the earlier the children are integrated in an educational system, the larger their chances to succeed.

Although the idea was excellent, I didn’t believe it could be done. One would have to work in full cooperation with the local leadership and the parents, find a suitable and accessible location, hire teachers and bring equipment, get the approval of the Palestinian Authority, to say nothing of the Civil Administration that as usual would do everything in its power to undermine and destroy the initiative.

I accompanied Rachel’s efforts from a distance, passively, and about a year ago, after tireless work, the idea seemed to be shaping up, but everything collapsed at the last minute (I’d rather not get into details). I was convinced that this was it, Rachel would finally understand this is impossible.

But like the phoenix of old, Rachel began to organize everything anew at a different location and in the beginning of the present schoolyear, a kindergarten came into being at Hamam Al Malih, with 27 boys and girls attending from the local shepherd communities. The PA connected it to its official school system, including structures and salaries. Everyone helping Rachel along the way with fundraising, equipment, logistics etc. share this important achievement.

The Civil Administration hurriedly issued a demolition order for the construction of this special school, and it might take place any day now. The order was issued about 2 weeks ago. According to military law ruling the Occupied Territories, the order is “legal” and cannot be appealed in court. Luckily Rachel is indomitable.

When we reached the area around 1 p.m. we were informed that officials of the Civil Administration have just come around and are issuing demolition orders. The expected explanation: this is a firing zone…

46% of the Palestinian Jordan Valley have been declared closed military zones. The Israeli army does not need most of them they are not used for maneuvers. But all the Palestinians living and grazing there, they and everything they possess, are violating the law and may be destroyed and expelled any time – and its legal.

How do the folks at the Civil Administration decide whose lives will be destroyed today? How many families? In which communities? And shall we confiscate their tents as well? Their tractors? Their water tanks?

This time, these are two families in the Mita community. There are about 20 families living there, raising sheep and goats. We met several inhabitants. They said that originally, they inhabited Tel Arad, inside Israel. In 1948 they were expelled into Jordanian territory and settled down in the Hebron area. In the early 1980s they were expelled once again by the Israeli army and found themselves in the Palestinian Jordan Valley, with their flocks.

A few words about the Civil Administration, subordinate to the Ministry of Defense’s COGAT section (Coordinator of Government Action in the Territories)

I Googled them to see what they say about themselves. In the introduction to their 2000 report, I read that “the Civil Administration acts to improve the quality of life and welfare of the Judea and Samaria inhabitants”. To the best of my understanding, this was indeed the official reason for creating this administration. It was even given a special article in the report. Other articles: overcoming the Corona pandemic, digitalization, passage of ill patients into Israel etc.

What I have seen in the past 12 years, since I began visiting the Palestinian Jordan Valley: The Civil Administration’s main contact with the inhabitants is that when one of them sees a Civil Administration vehicle on the road (they all recognize those vehicles) everyone goes into a state of stress – whose doom will it be this time to be visited by those vehicles bearing a demolition, confiscation, expulsion or fine order. 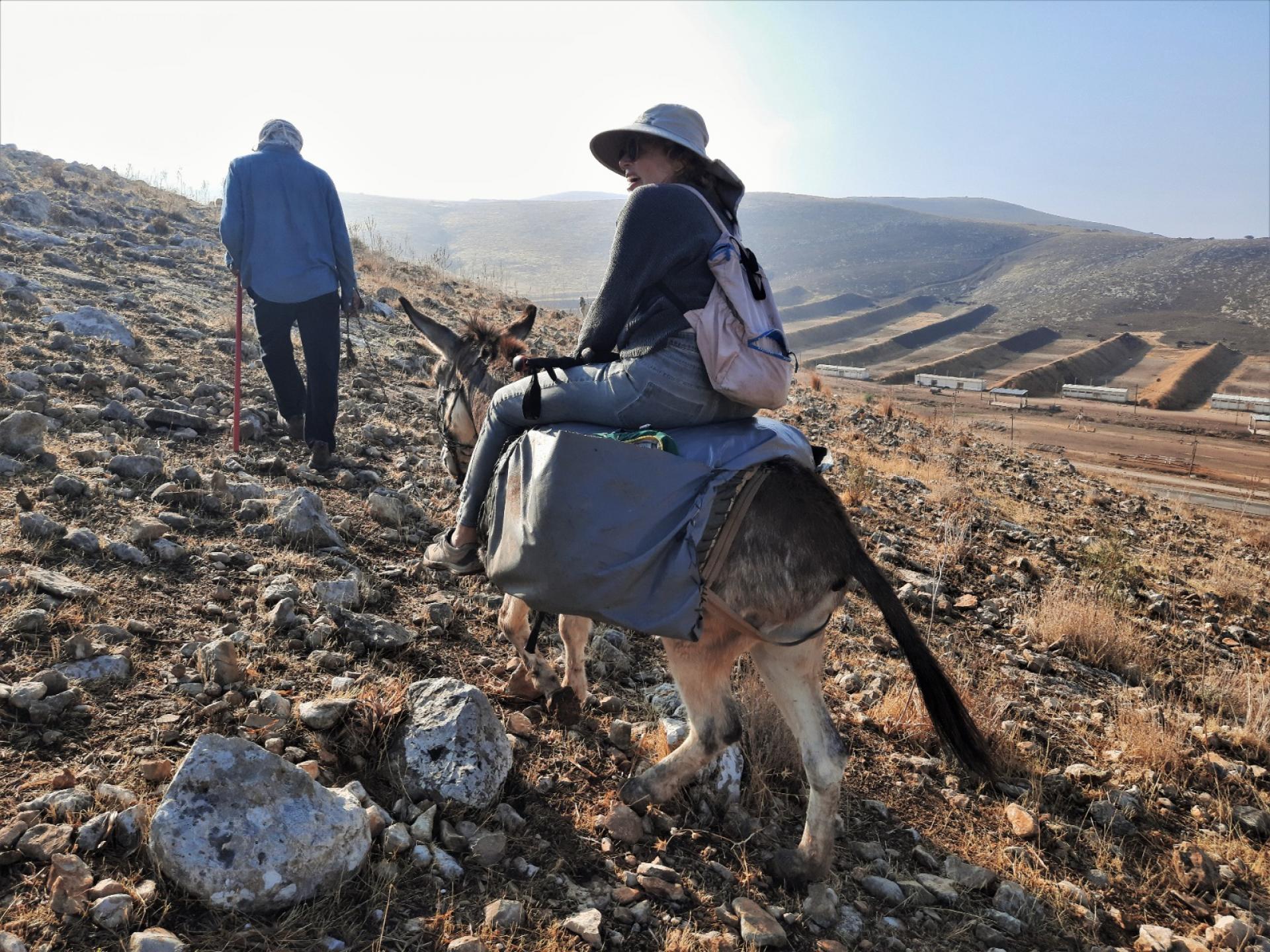