05.15. dark, cold and raining. Because of the rain there are no men praying at the parking-lot, and men are crowded inside the café, instead of the yard as usual.  Inside the checkpoint the lines were short – apparently because of the rain many people did not leave home – although, as expected, the rain stopped after a short while.  The beigel seller said that yesterday, too, the situation was ‘okay.’ The cake seller had set up his stall inside the shed, and soon after we arrived the kiosk opened.

Today all 5 checking stations were open and passage was reasonably quick. Till after 6 o’clock there were short lines. There was a shabby chair next to the leftmost cage. We don’t know how it got there, but every now and then an older person would rest on it, instead of standing in line.

A guard and D.C.O. officer arrived olnly at 6.20 to open the humanitarian gate. Indeed it was not absolutely necessary, but as soon as people saw them women and others rushed towards them. We went outside to see the dawn – and the situation in general. The strong winds had torn down the metal borders of the path leading to the checkpoint from the road. 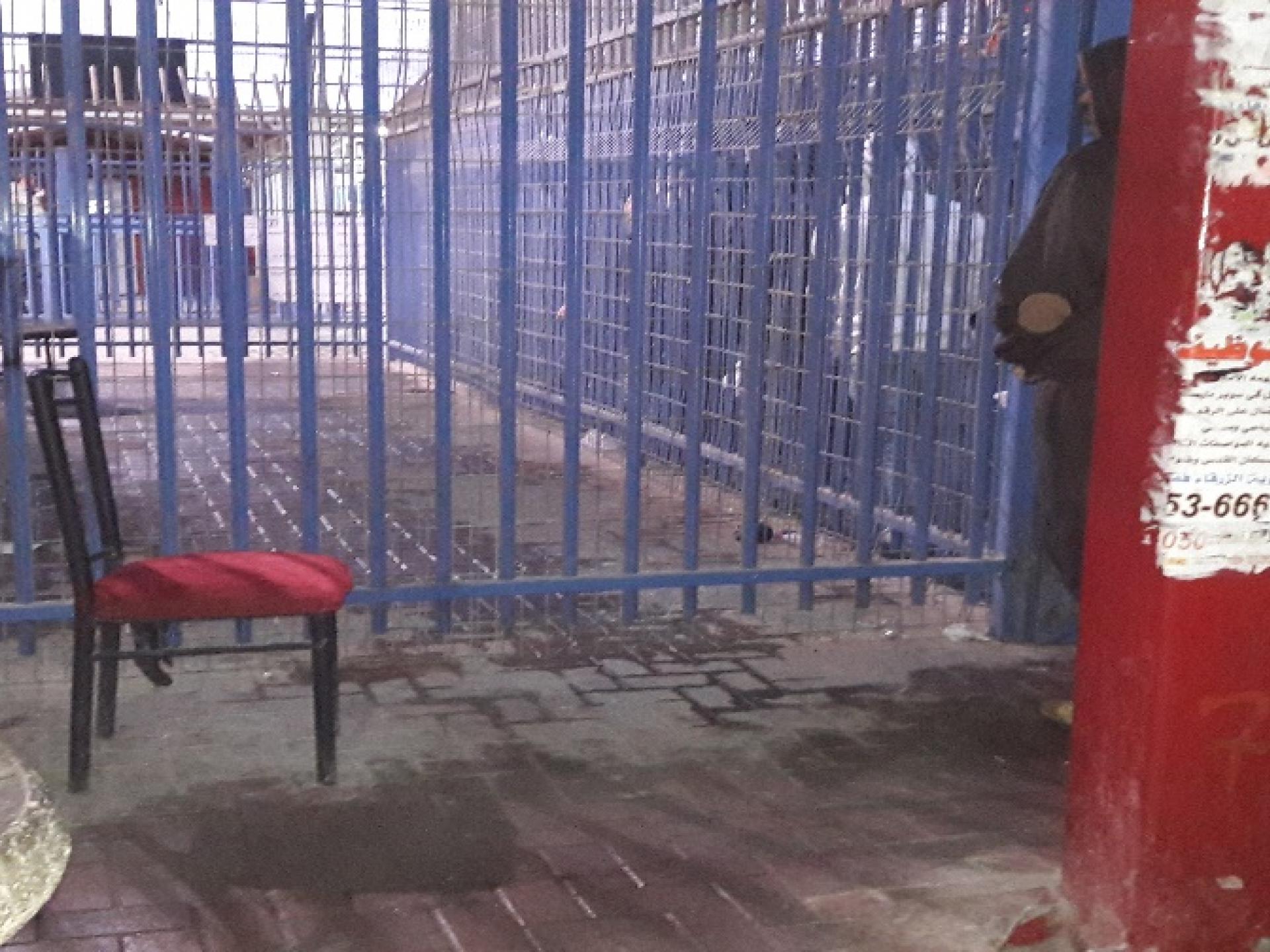 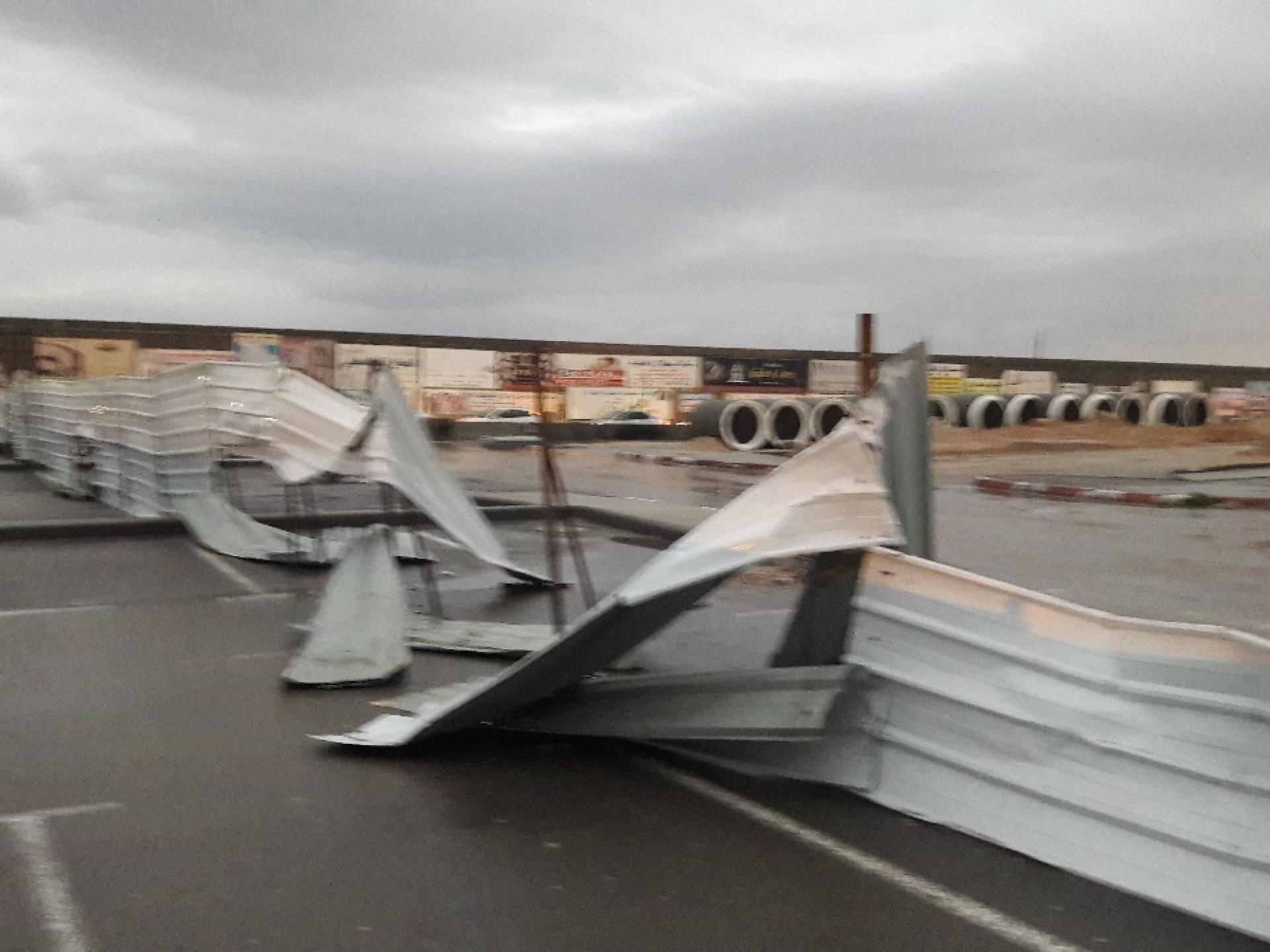 The tin fence damaged by the wind
Photographer:
Ronit Dahan-Ramati

It does not look as if much building work has been done in the erstwhile parking-lot.  It is unclear why there was such a rush to destroy the parking-lot just to turn it into storage for building materials, making approach more difficult for people.

The sun began to peep through the clouds, and we enjoyed the pink-red sunrise. 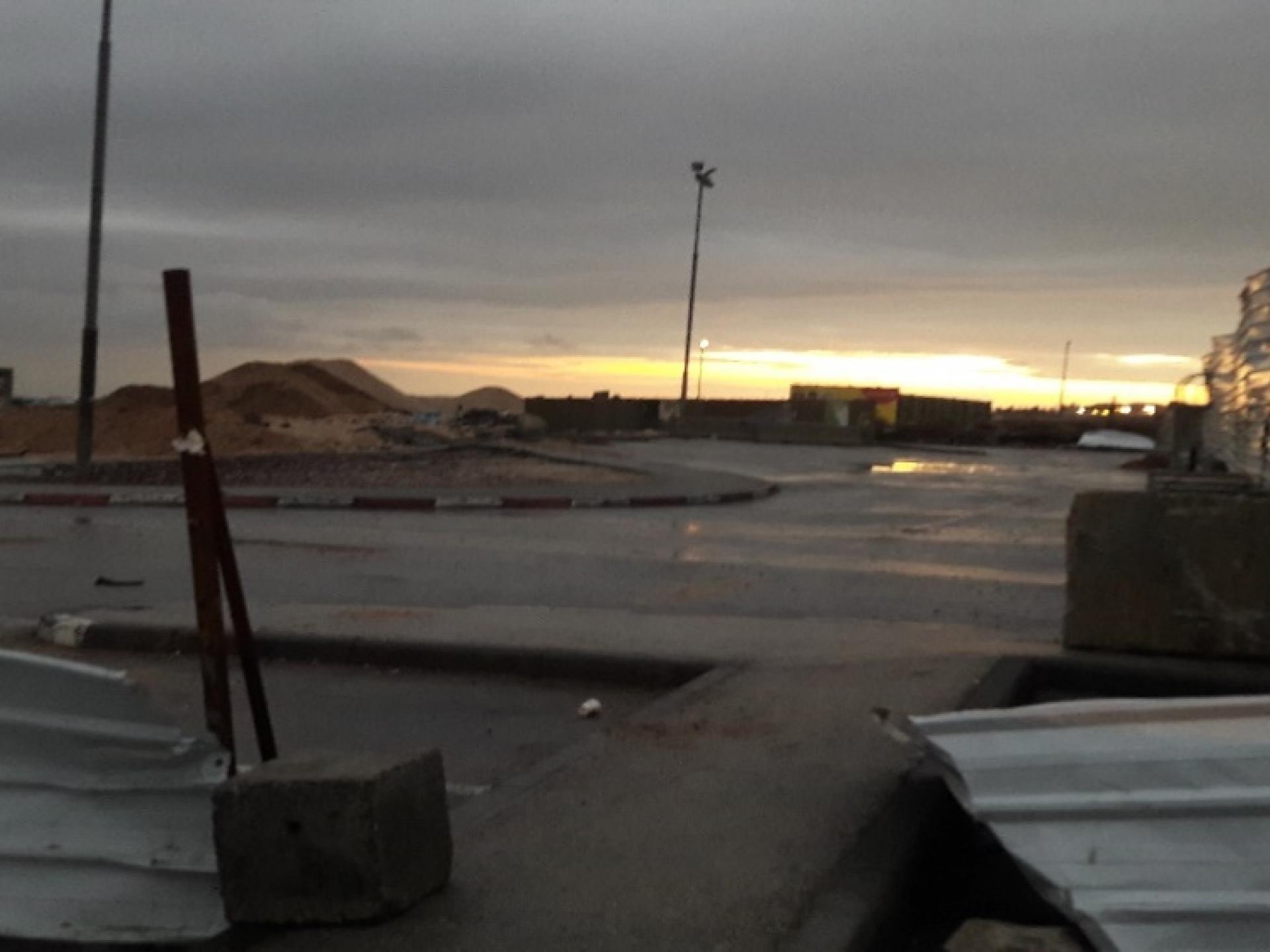 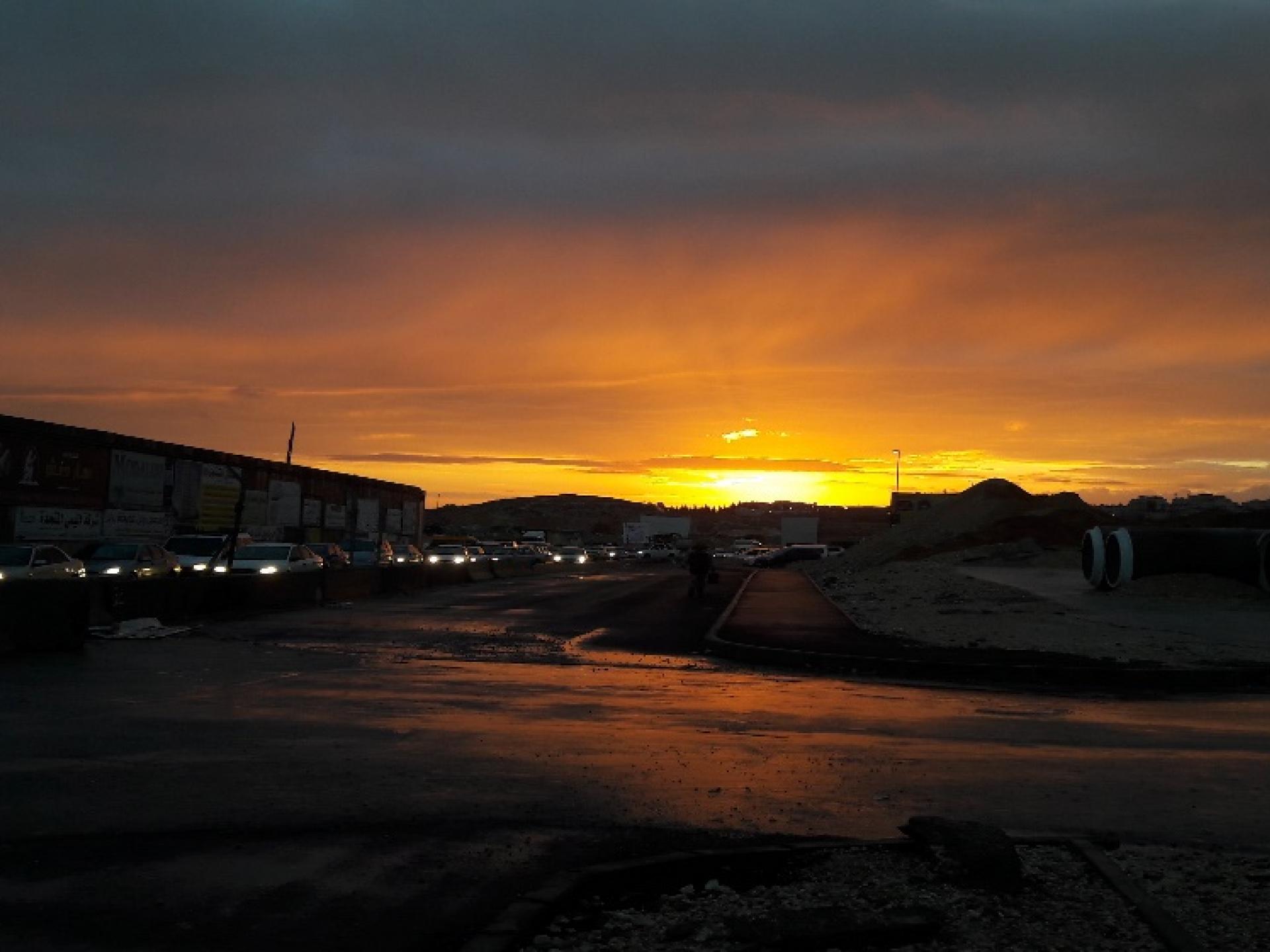 At 6.35 the lines were very short and we joined one. But then we saw that the lines were once again lengthening and were even extending beyond the shed. Presumably workers (particularly construction workers) had waited to see if the rain was indeed stopping before deciding to leave for work. So we left the line and waited until the lines again were short, at about 7 o’clock. While we standing in the cage nearest the aquarium, we noticed that in the sterile

area between us and the soldier in the aquarium there was a small knife. Had one of our soldiers been eating there and forgotten it? It is unlikely that a Palestinian who wanted to rid himself of it before reaching the checking station would have thrown it there, rather than among the cages.

After we passed the turnstiles and were waiting in line for the checking station, we noticed in the distance within the checkpoint  grounds some new building, to the right of the watch tower.

It took us 15 mnutes to pass.  Our colleague Tamar Fleischman reported last week that the municipality inspectors had made reports on peddlers on the Palestinian side of the checkpoint (which is within Jerusalem Municipality’s jurisdiction, and that is why we are allowed to be there). Well, if Jerusalem has an excess of manpower, here are a few suggestions of how to care for the Israeli side of the checkpoint:

In the cement planters in the area of the checkpoint, there are no plants – they are used as rubbish bins.

A big sign saying “We are renewing for you”, listing all the details of the planned building and road improvements, has fallen a long time ago and only its frame is now sprawled on the sidewalk. The metal is used as a shelter from rain and sun.

On the other side of the road are broken fences and rolling refuse. 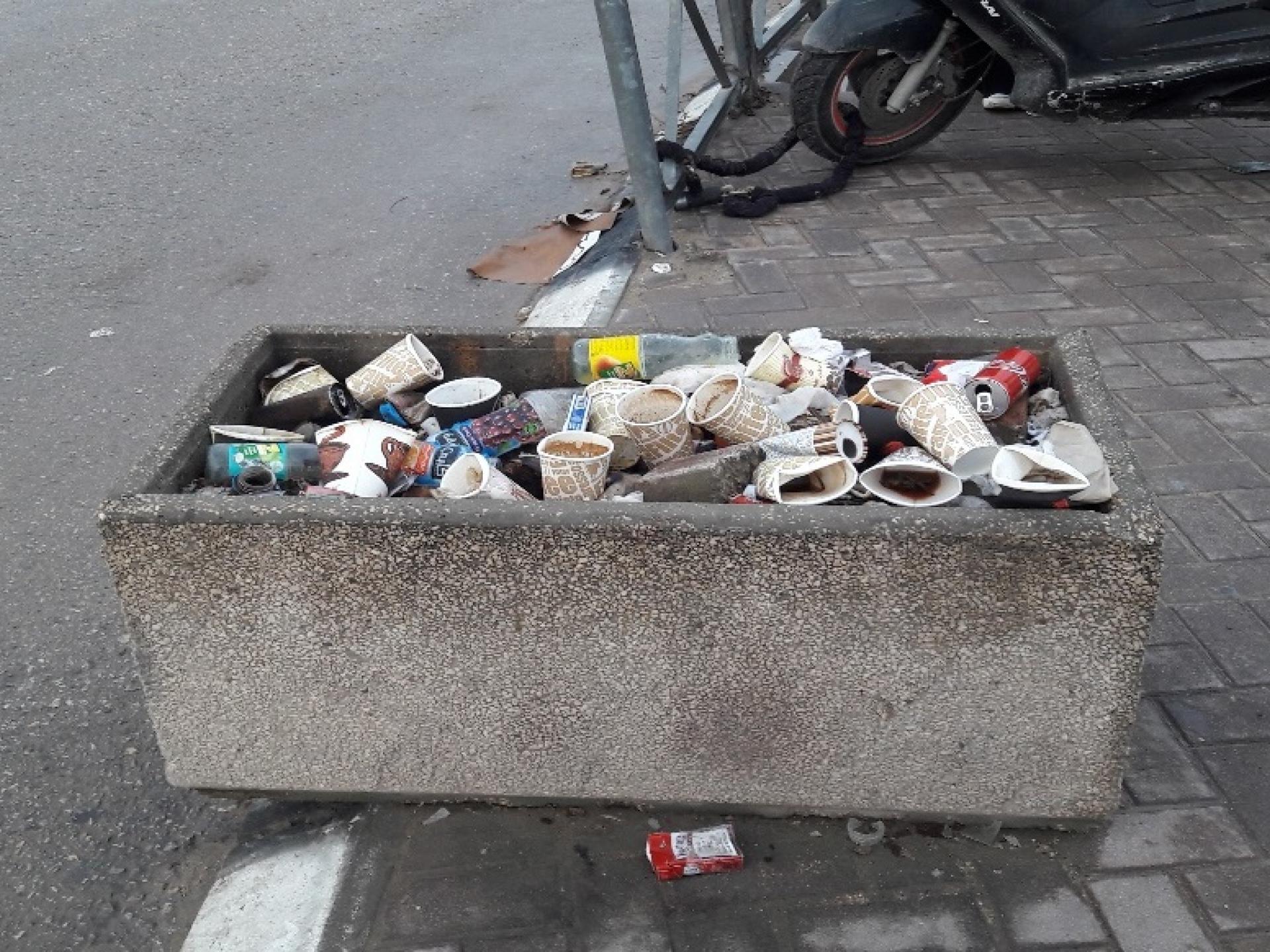 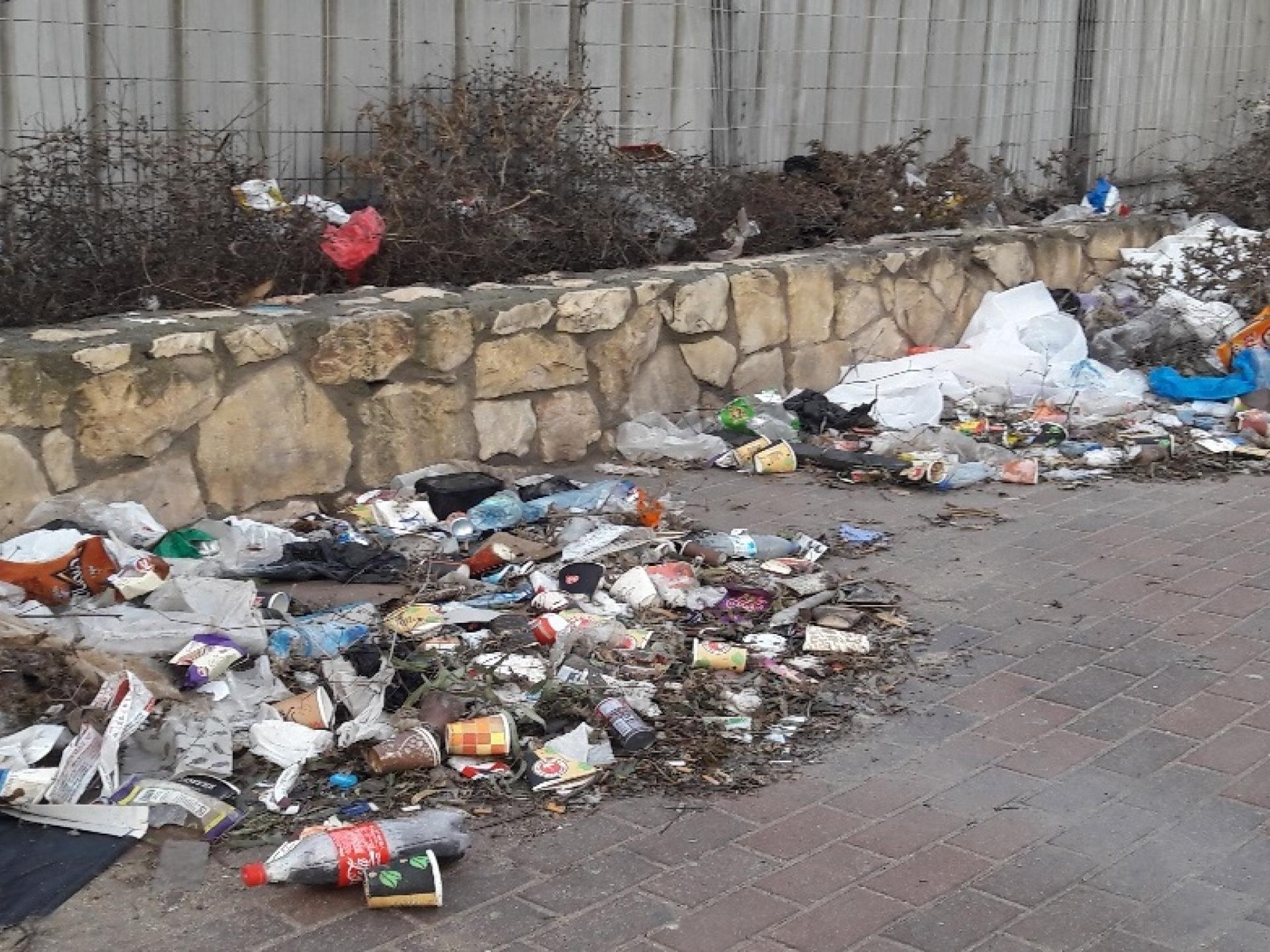 Even when they clean here (about once a year), they clean only the sidewalks, but not the litter behind the low stone wall.

On the way to the parking lot, a post that has fallen. In the background the partitition wall.

And next toe the parking lot, another sign “renewing for you” that at least for two weeks has been leaning on an electric pole.

And we haven’t yet commented on the lighting on the way to the checkpoint which, at in  one section, has not been working for years! 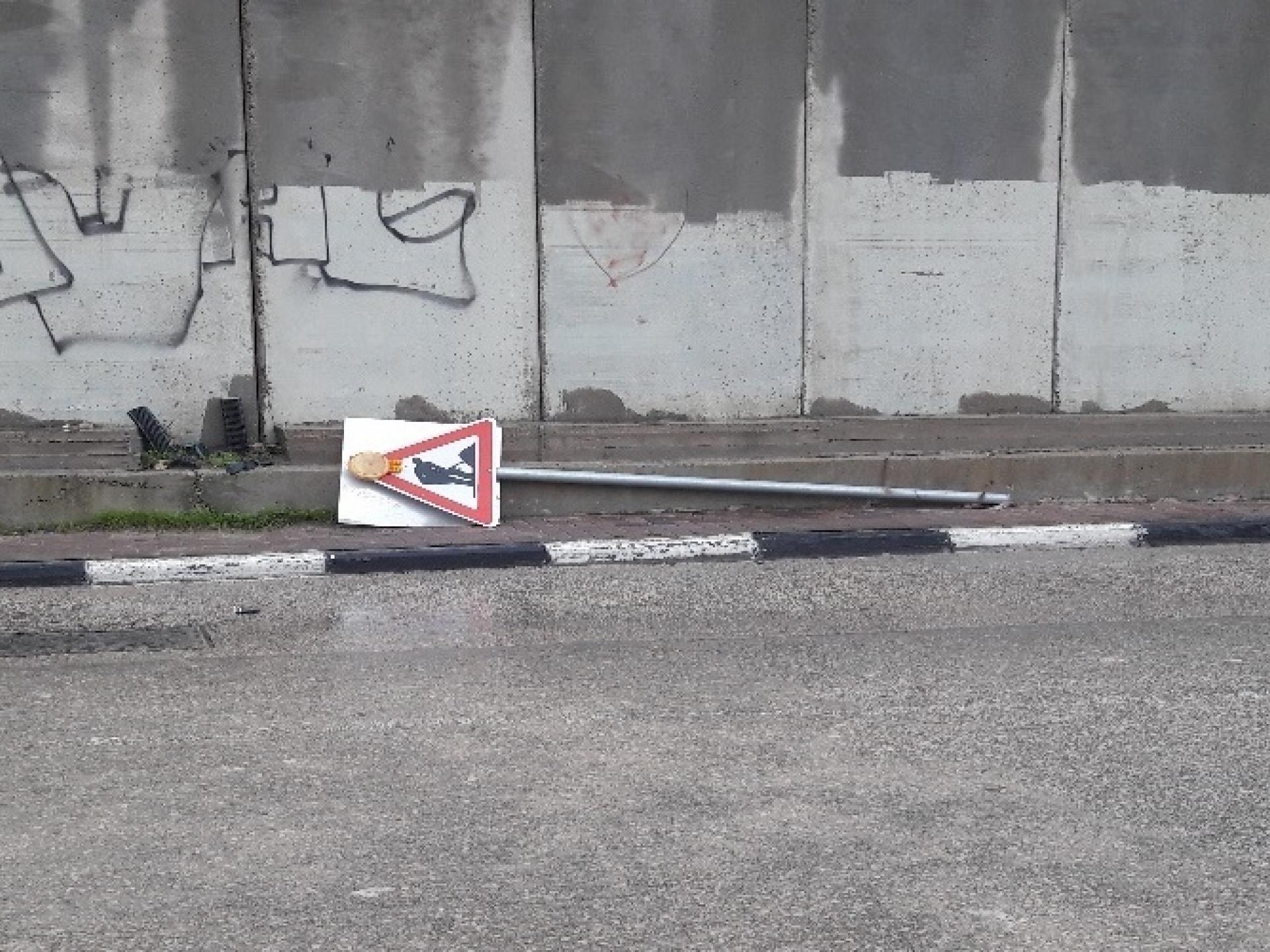 A fallen signpost. In the background, the separation wall.
Photographer:
Ronit Dahan-Ramati 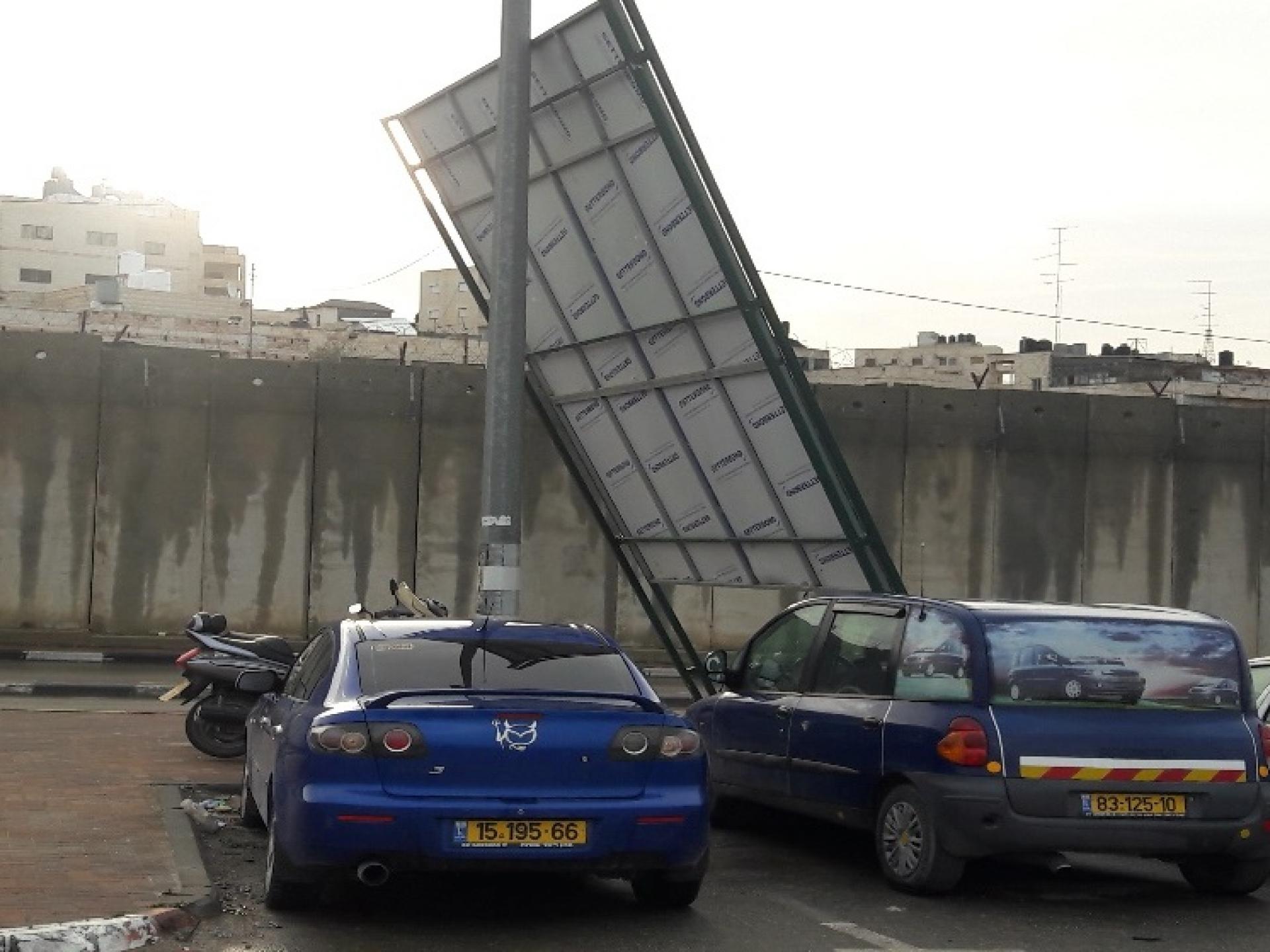 Sign “renewing for you” that at least for two weeks has been leaning on an electric pole.
Photographer:
Ronit Dahan-Ramati
Qalandiya