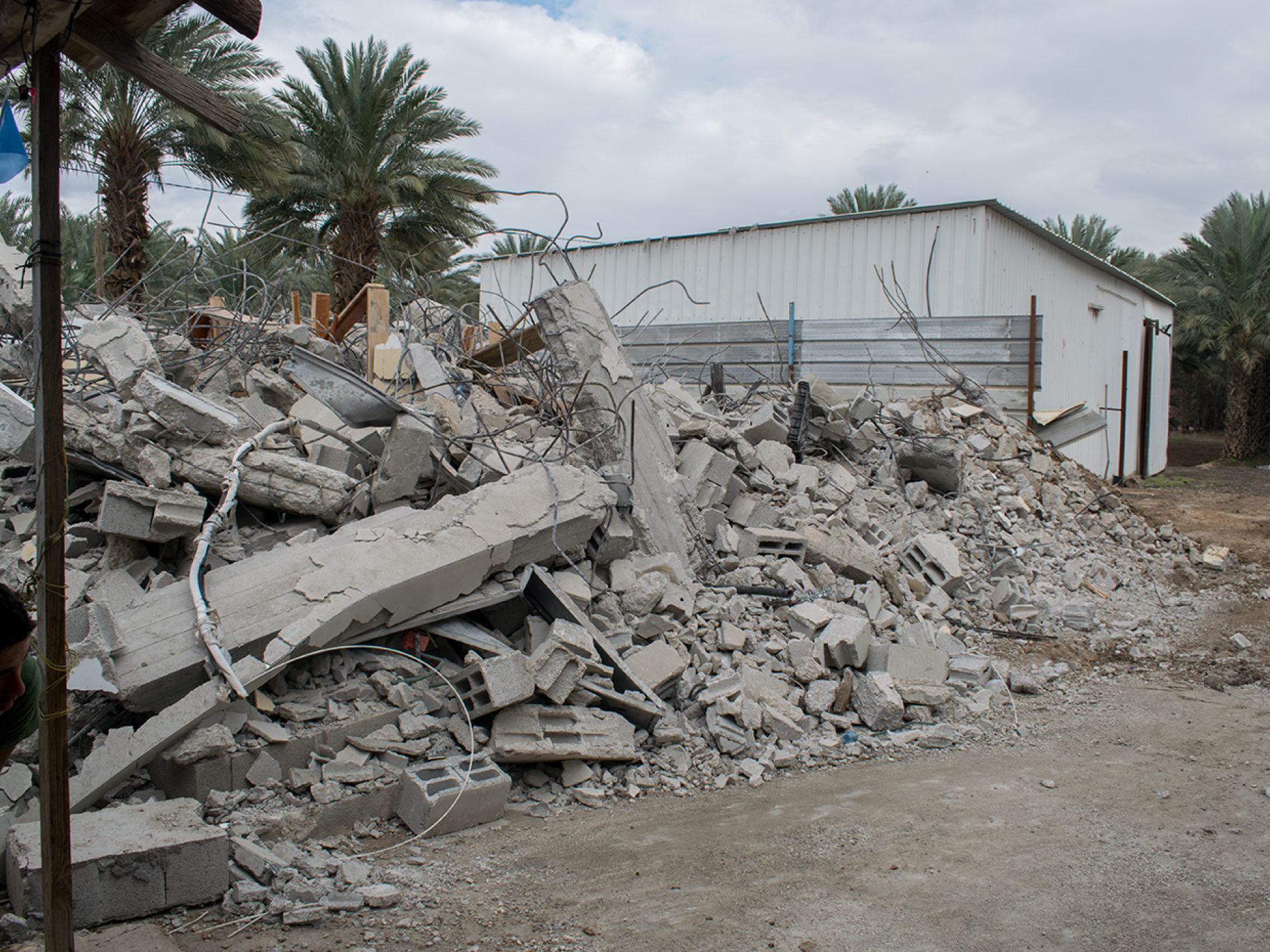 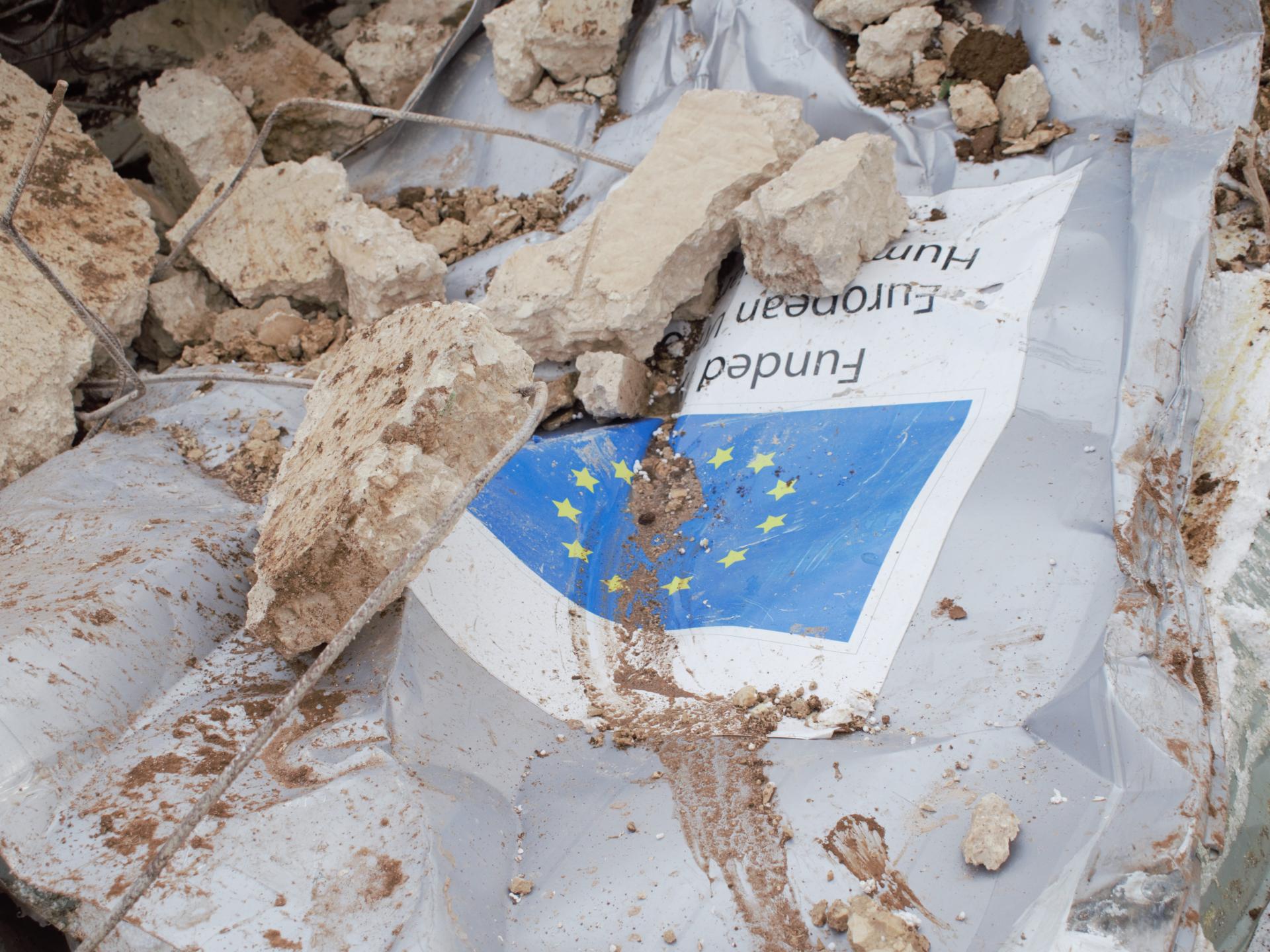 The demolished caravan at Furush Beit Dajan, with the plaque identifying it as a donation by the European Union
Photographer:
Nurit Poper 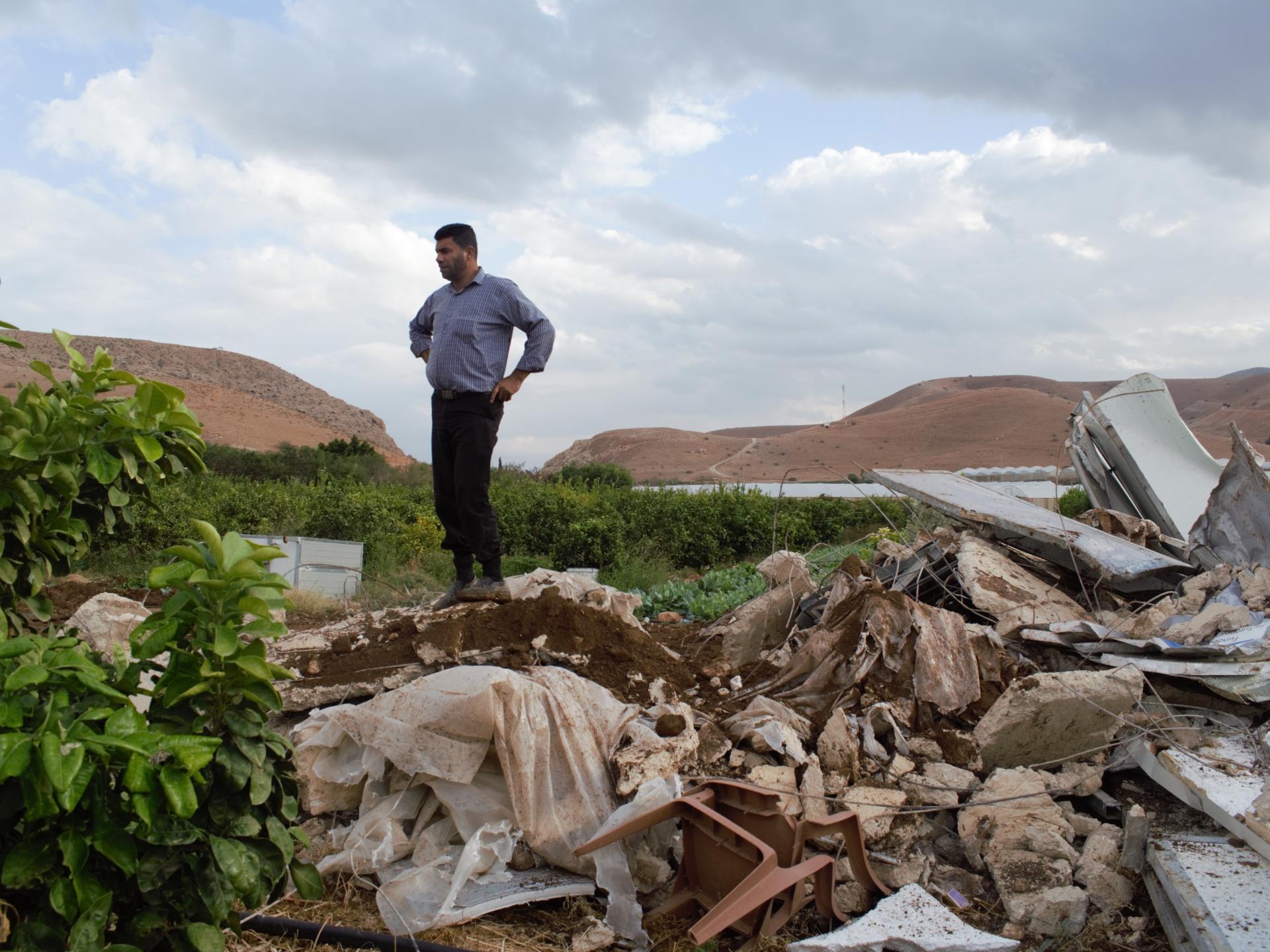 After two weeks of tense quiet, the army has returned for a demolition spree in Jiftlik and Furush Beit Dajan.

Our first stop: Abu Al ‘Ajaj opposite Gadi (former army) camp. When we got there, a group of 7 men were sitting in the shade of a Ficus tree next to an existing structure that used to serve as a pumping station. All of them are village residents. Seeing us, they invited us to join them. In back, between a date-palm grove and an old dilapidated house built of mud bricks, was a pile of fresh rubble from a demolition of a stone house that had been destroyed 3 hours earlier. At 8 a.m. the Civil Administration bulldozer arrived. It took half an hour to turn the house into a heap of stones. Efficient work… A Palestinian TV correspondent interviewed the owner of the demolished dwelling. The traditional building method in this area is with bricks of mud mixed with straw.  With time they decompose and water seeps in, so the houses are rebuilt with bricks. In the eyes of the Civil Administration and the Israeli government this is considered a violation of the law if the house is inhabited by Palestinians.

We held a conversation with a person who presented himself as the head of the village. He is a Beer Sheva Bedouin, proud of his origins. His father arrived in the area in 1948 and the family has lived there ever since. The home owner is also a refugee of 1948, originally from Sheikh Mwanes (presently Ramat Aviv, neighborhood of the Tel Aviv University). The entire area is surrounded with date-palm groves.

On the other side of the road is an abandoned army camp (Gadi). Daphne tells us that Yoel Marshak, of the Labor Party (presently the Zionist Camp), is determined to found an outpost there comprised of Kibbutz descendants or vegans in the camp area and surrounding – a large outpost ratified by the relevant elements. We assume that the location of the latest demolitions and Marshak’s plans are connected. Via Attorney Eitay Mack, Guy of Taayush, Itamar of Combatants for Peace and Daphne submitted a legal petition against founding this outpost so that at this point its founding has been halted.

While there we heard that in another part of Jiftlik, called Shuni, a sheep pen was demolished that same morning. Meaning that the sheep and especially their young will spend the night and coming days without shelter. This obviously does not concern those who both rule and carry out the demolitions.

On our way we learned that a home was also demolished in Furush Beit Dajan village. We climbed up to Zob’a home up the hill overlooking Hamra Checkpoint, to pick up his son M. who would serve as our guide to the fresh demolition site. 3 months ago he himself, along with Taayush friends, demolished his caravan after receiving a demolition order. Thus he prevented further destruction by the army that impacts anything on its way – usually including trees, irrigation pipes and water tanks. M. showed us his new “home”, a large plastic tent turned dwelling. He has not yet put together the cabinet and bed. This morning, while working in the field, he saw the bulldozers on their way and was certain they were about to demolish his tent. His wife Hadija is a painter. He showed us her work, just finished, painted in dark colors, expressing the horror – a constant companion of living under the threat of demolition.

With M. we drove to Furush Beit Dajan to see the caravan the army had demolished at 10 a.m. that day. It had served as a dwelling for a family with children in the heart of citrus groves and vegetable patches. It is fertile farmland with plenty of water, creating an enchanted green landscape far from the road and from any community. In spite of the absence of any Jewish settler-colony in the area, and the fact that these farmers are far from sight, the bulldozer got there. The owner is the head of the village as well as the principal of the local school. He told us this is privately-owned land.

With unexplained meanness, the destroyers bothered to impact the main irrigation pipes and puncture a large water tank in its bottom while turning it upside down and emptying it of water.

Among the rubble we noticed a plaque of the European Union, showing this caravan had been its  donation.

Before our return we drove up to Makhoul to see how our friends there were faring. They too live under the threat of home demolition.

At 16:15 we drove near Hawwara Checkpoint. 2 soldiers and a Palestinian stood by the roadside. The Palestinian told us that 2 days ago he loaned his car to a friend. The friend was arrested at the checkpoint and the car taken away. The car owner is trying to get it back but hope for this seems null.

The demolished caravan at Furush Beit Dajan, with the plaque identifying it as a donation by the European Union