MAIN POINTS.   Settlers use fire to grab big chunks of Burin private land. First, they throw burning tires down the hill and burn an olive grove in Burin below, then they dig a road at the edge of the burnt out land, and repeat this with the next grove. Yzhar and Givat Ronen people burnt 1,500 olive trees this year. A serious loss, especially because this year’s harvest was expected to offer a  much better yield than last year’s.  Beita excludes lone men from a park with playgrounds, to ensure the safety of mothers, children and families.  Inner quarrels have closed for 2 years a factory which bottled water from a natural spring, thus providing needed employment, cheaper water, and a good municipal income.

BURIN  is a village in a valley south of Nablus. On the hills above it several greedy settlements threaten its existence: to the south Yitzhar, and Givat Ronen, and to the north Bracha. We had an appointment with the mayor, but he wasn’t in. So instead we met again D., a well-informed woman.  We were struck by the word “OSLO” in white letters all over her woven black bag. Very hospitable, she set up chairs in her late parents’ garden and even served us coffee! And to be free to talk to us, she had, Mustafa told us, even left a meeting with women which she had herself initiated. She told us how much she enjoyed her Ymei Yam day last summer—a  fun day at the beach for Palestinian mothers and children from the villages organised by MachsomWatch— and that she would like to go again.

WATER. Serious deprivation in the summer, when there isn’t any running water for 1 or 2 days or sometimes for a week. And when it does come, the water is never enough, for the monthly allocation to the municipality has not increased since Oslo 1993 though the population has grown. A rotation system — opening once or twice a week the valve in one neighbourhood while shutting valves in the others—ensures an equal, but very insufficient distribution for the 3,400 villagers. Every house keeps its allotment in a tank on the roof.

After some prodding,  our hostess says that Mekorot water is mostly enough for drinking and cooking. They must often postpone laundry and cleaning the home; and even in “a good” week no one can take more than 2 or 3 showers a week. Her washing machine is semi-automatic, that is, the amount of water used is controlled manually.  And of course, they have to also buy water from a truck—both expensive  and unsuitable for drinking.

ELECTRICITY . Till a year ago, there was an electrical outage once or twice a month. Last month it lasted 9 hours, spoiling and wasting the food in the freezer. This changed when instead of local villagers caring for the maintenance of electricity, Israeli [technicians] took over. But the amount of electricity provided does not allow free use of Air Conditioners. When they turn these on at home, lights get dimmer. However, only 30% of the villagers have Air-conditioned homes. 70% cannot afford what in Israel today is no longer seen as a luxury.  Asked whether there is A/C at school, D. laughs. She points out that worse than the heavy heat,  is the cold. She does have a gas heater at home, but on cold winter days her daughter has to carry a blanket  to school.

SCIENCE AND TECHNOLOGY HIGH SCHOOL. Two weeks into the new school year, there are no problems yet. But all through last year,  there were constant incursions of Yzhar and Givat Ronen violent people, backed by soldiers,  forcing pupils and staff to go home (see our reports dated 26.02.19; 10.06 and 25.03.2018).

Furthermore, 10 dunams (2.47 acres) of farmland belonging to the school have been grabbed.  (Our February report told of the notification to the school of this future dispossession). This was not “abandoned” land: pupils had been growing wheat for flour and vegetables for meals at school. On the remaining land, pupils now grow cucumbers, tomatoes and other vegetables in hothouses. D. has twins, a daughter and a son who took their Bagrut exams last year. Her son is home now, looking for work; her daughter is at University studying English and Hebrew. She wants to understand and to translate what the settlers write on Facebook, including curses they hurl at villagers.

SETTLERS are the worst problem. A nightmare,  D. says. Ten days ago, an olive grove near Huwarra, on land belonging to a Burin family, was burned by Bracha settlers.  People from Yzhar and the “illegal” Givat Ronen outpost have invented a new pastime, a new strategy of grabbing others’ private land. They set fire to tires, throw them down the hill straight at Burin olive groves. The first time this “pastime” boomeranged: the flames rose up the slope and set fire to their own crops. Helicopters quickly put out this fire—but only on their own land, of course. A month ago, and again two weeks ago, following the burning of a Burin olive grove, they dug a road at the edge nearest to the village; then burnt the next olive grove, dug an new road, and so on. Diabolically, they set fire to the grove a short time before harvest time, when the olives are almost mature, ready to pick.

BEITA is a town north of Tapuach junction and south of Huwarra, east of road

60. We spoke with W., a member of the city council who speaks English fluently and with the  Council head.

W.  offers a historical narrative of her 1,000 year-old town. Some houses date back to the early Ottoman period. Many travellers passed through Beita, which was on the main Middle East route. Romans ruined the town; Ottomans  rebuilt it, and also built a castle on the hill, of interest to archaelogists today. Beita is one of the largest towns in the Nablus area. The town and the agricultural area around it occupy 18,000 dunams. Settlers live far enough not to be a problem.

WORK. Some of the girls study math and science, but schools mainly train them

for a variety of jobs: designing, hairdressing; dressmaking; teaching; nursing; journalism; lawyers. Though there are more university-trained women than men, few jobs are available for them. As to men, some work only 2 or 3 days a week. Others farm olives and almond trees—which cover most of the land; olive oil presses are an important part of the town’s economy. The olive harvest will begin on October 5th. Several men with university degrees—like her husband, a trained nurse— work in construction in Beita. Some work in settlements, and a few,  who received permits, work in Israel, where they are better paid.  The unemployment rate is 20%.

We ask about FOREIGN AID. They feel the loss of USAID. But W. said European funds, such as Belgian Cooperatives, a government fund, a Japanese and  another from Kuwait—these have all enabled paving streets and building schools and parks.

Electricity is not a problem, but water is. As in other communities, the population has grown considerably since Oslo 1993, when the town was allotted a certain amount of water. But Israel has reduced the amount supplied by Mekorot, and as the population grows, this amount—especially in the summer— becomes more and more insufficient. As in Burin an

d elsewhere, the Council distributes water to the different neighbourhoods via a rotation system. Low pressure—affecting houses up the hill— and an insufficient allocation for their 12,000 residents forces them to buy expensive water from trucks.

To make matters worse, Israel refuses to give permits to dig wells because it claims that the water belongs to Israel. But actually, all of the water aquifer lies under Palestinian territory.

Unlike villages we visit,  Beita has 2 parks. One is for mothers and children, and families; men may enter only as part of a family group. There are playgrounds, which kindergarten and school children groups enjoy. However, no football fields, there or elsewhere. Only in school. We plan to return and visit the the parks.

Near the second park, there is a water spring called Ein Olein, which gives the park its name. Open to families and also to men on their own. A factory closed for the last two years used to bottle this fresh water, and sell the bottles for a cheaper price than that sold by the trucks. This bottled water was also sold to other cities.  So its closing for 2 years—due to a quarrel between stockholders and the municipality—means the considerable loss of  a valuable source of employment  and financial income to Beita and its residents.

The beautiful, large handmade model sailing ship is in Beita Council room on top of a bookcase; a gift to the town,  it was made by Palestinian political prisoners in an Israeli prison to represent refugees’ return home. 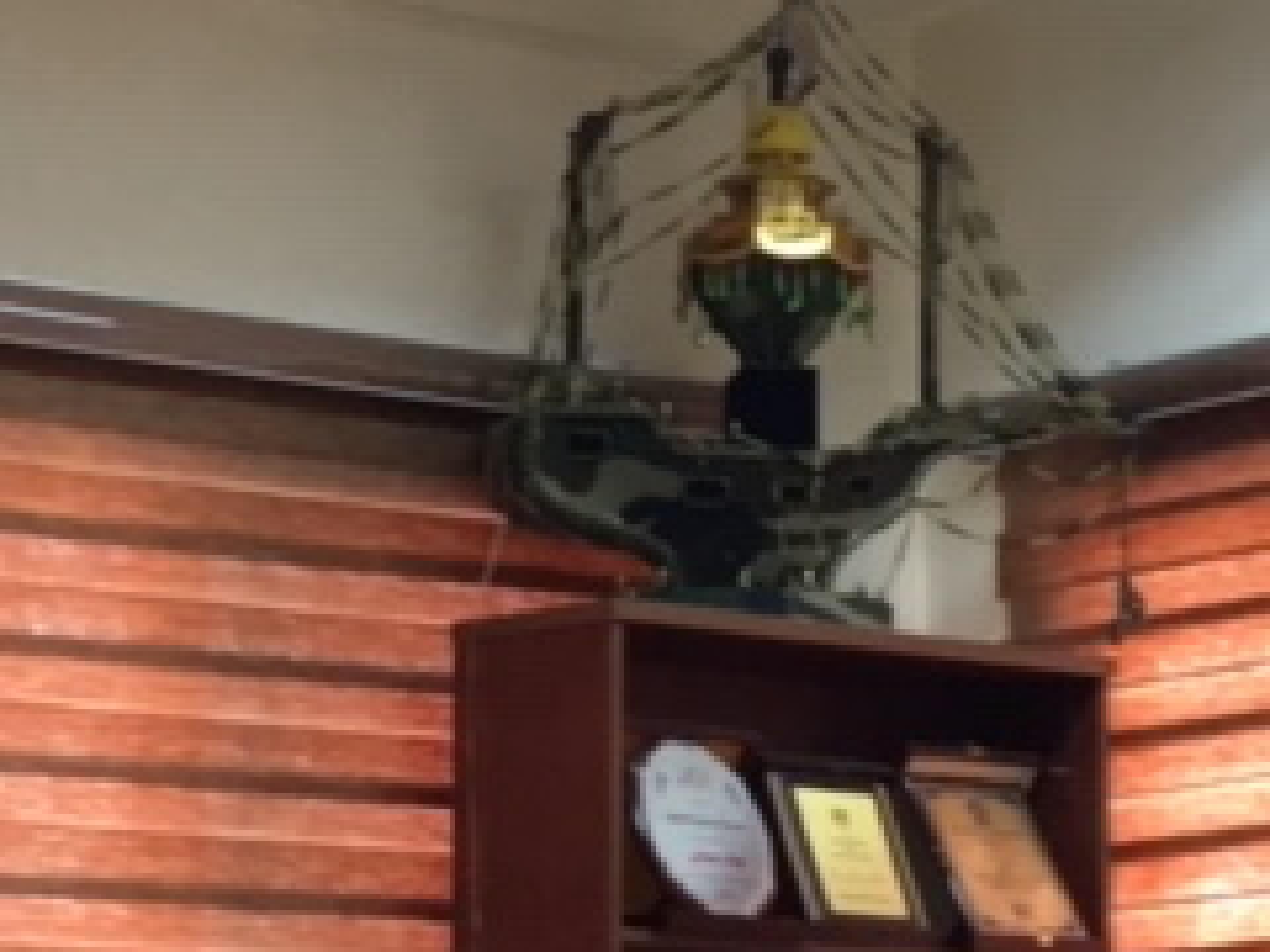 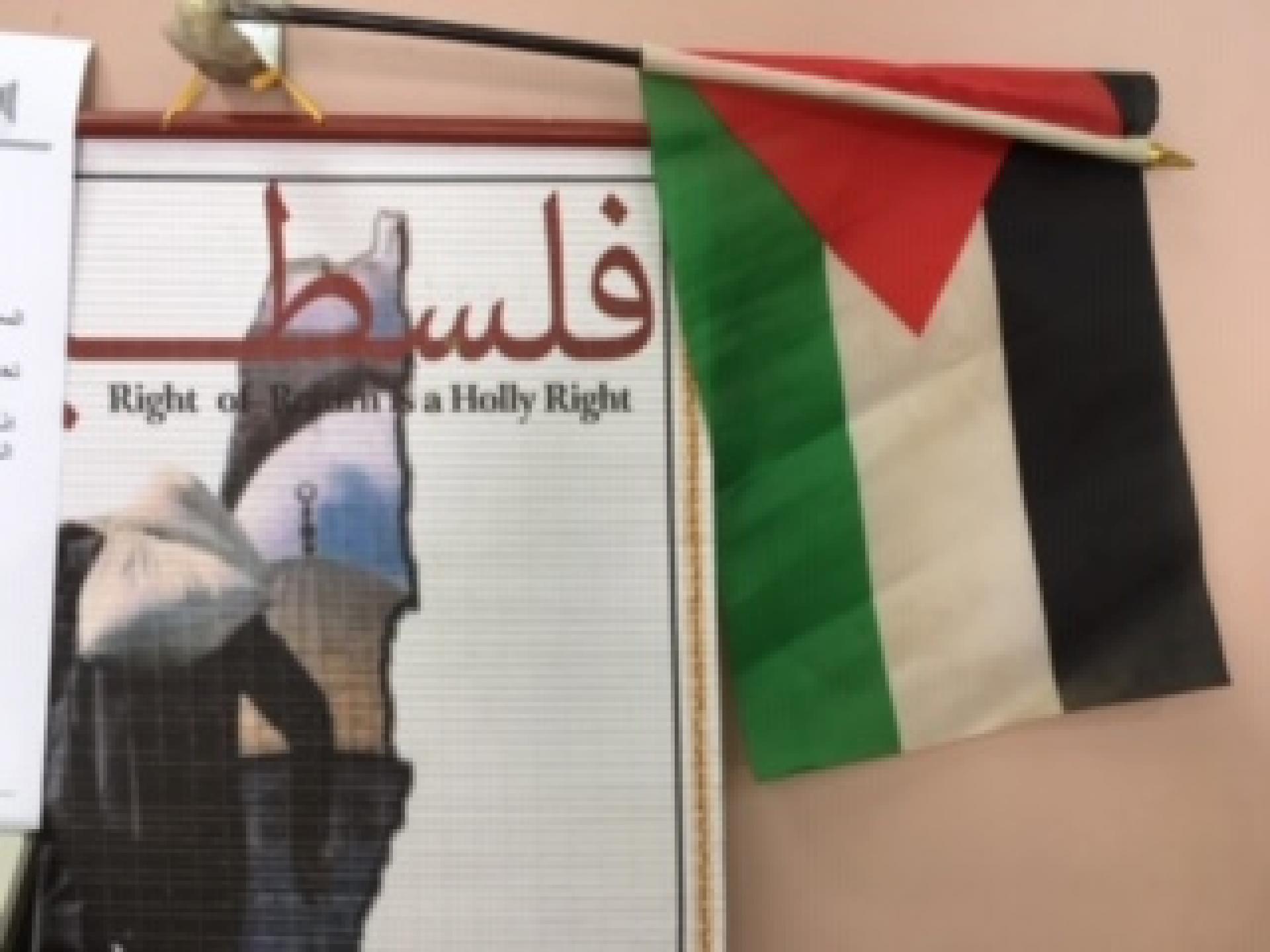 Wall poster: “Right of return is a holly right” 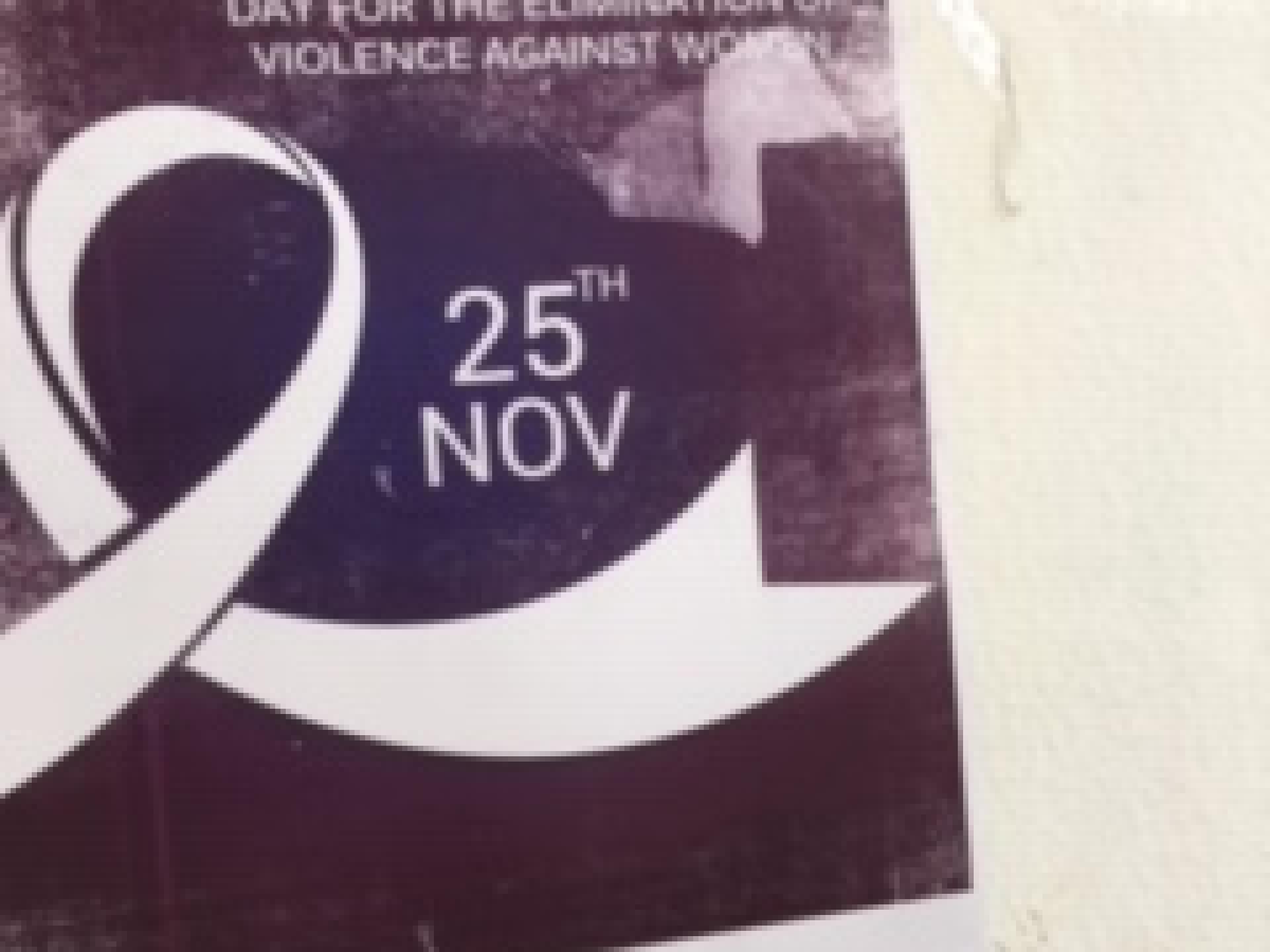 Wall poster: “International Day for the Elimination of Violence Against Women