For years the coffee stall stood on the road leading to the vehicle checkpoint. For years it bothered no one, neither drivers nor pedestrians. Not only was it no hindrance, it even delighted body and mind in taste and appearance.
The taste was that of excellent Arabic coffee. And the appearance – a sign in both Arabic and Hebrew: “Aroma Coffee”.

But there’s a catch. The catch was inspectors of the Jerusalem municipality who raided the place, secured by policemen, and fined each of the vendors for hundreds of Shekels on grounds that they do not hold business permits.

I notified Ohad Hamu, thought he would find interest in this. It took a while, and two weeks ago he responded: it was no mere interest, he would actually try to help, and asked that I facilitate contact with Ahmad. Which I did. As I was sipping my weekly coffee there, Ohad and Ahmad spoke to each other on my telephone.

Ohad promised to do his best. We’ll wait for results with hope and skepticism…

girl who has suffered from a serious kidney illness since birth. She was hospitalized in Ramallah, her mother said.

So, true, the baby is one of the fortunate few among the many ill patients inside the Gaza Strip who even got to exit the open-air Gaza prison and reached treatment. But whereas it is well known that West Bank residents ill with serious kidney conditions are sent to Motala, to the Augusta Victoria Hospital in East Jerusalem and not to other West Bank hospitals, one cannot help wondering why of all people this Gazan infant, suffering from a serious kidney condition, was hospitalized in Ramallah rather than in a hospital that specializes in problems of this sort. 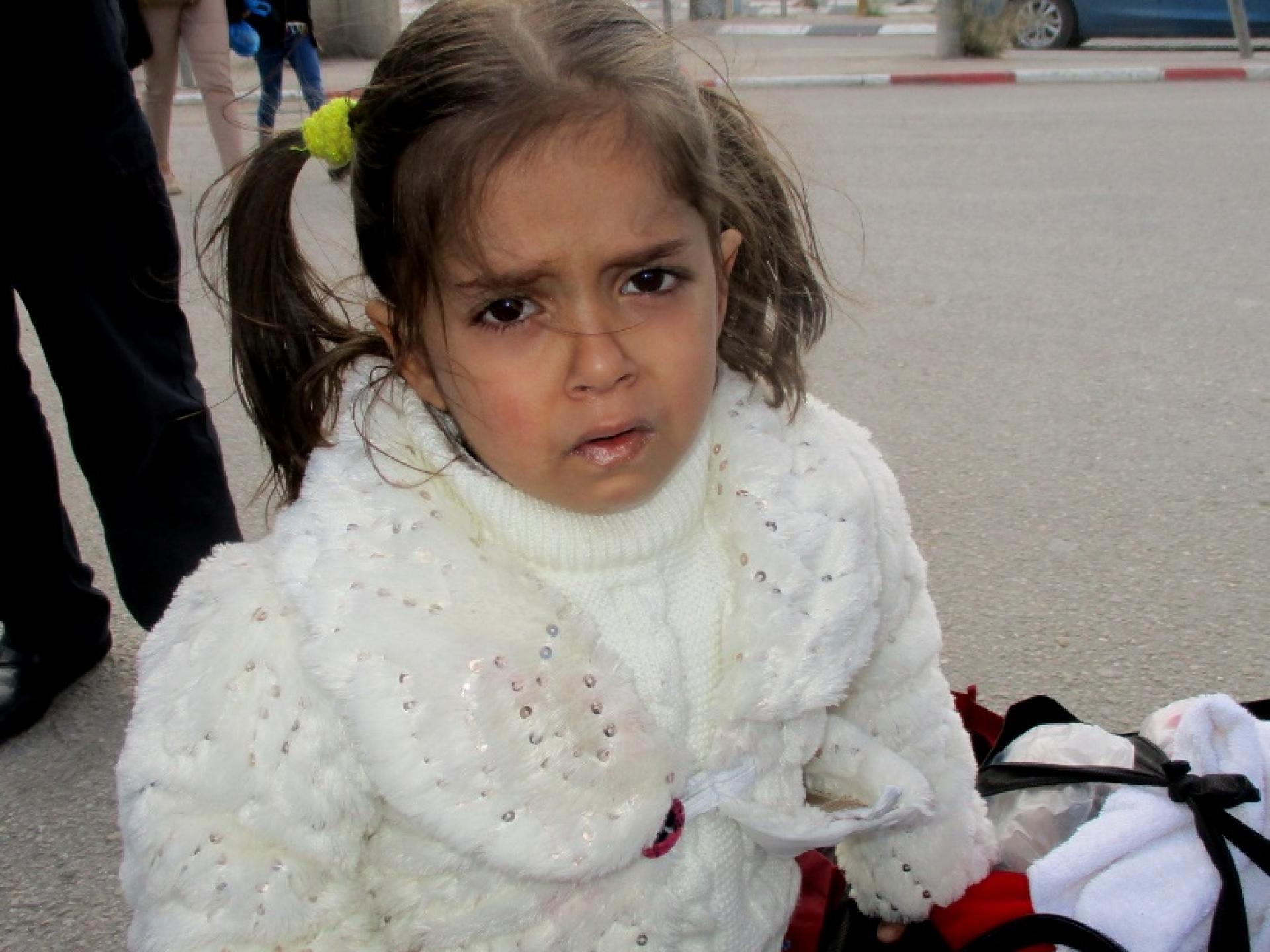 A one year and 5 months baby
Photographer:
Tamar Fleishman

The not-so-long way across the checkpoint lasted a very long time.

Why? Because the woman-soldier carrying out inspections whom, we could not see from the outside, only heard her voice, had the entire waiting line on hold.

The invisible woman-soldier kept yelling at the elderly man facing her: “What have you got there?” but not only does the scrawny old man not understand Hebrew, his hearing is not that good. He stood there helpless, embarrassed, mumbling: “What?... What?...” and she, behind her bullet-proof glass window: “I see a knife!” The man insisted: “What?... What?...” Then a man standing alongside him, and finding himself stuck inside too, in the inspection area, volunteered to help and translated. The two opened the man’s bags, took out each object and  presented it to the woman-soldier. She instructed them to place it all in a plastic tray, with which they went back and kept passing it through the metal detector. “I definitely see a knife. Once more!”

She ordered, they followed. Once more, back and forth through the metal detector. Again and again. We outside were the spectators of a theater of the absurd whose ending is unknown.

But every good thing comes to an end. The end came as, a half hour later, a policeman who was summoned entered the detention cubicle along with  the old man and his plastic tray, and exited with them five minutes later. 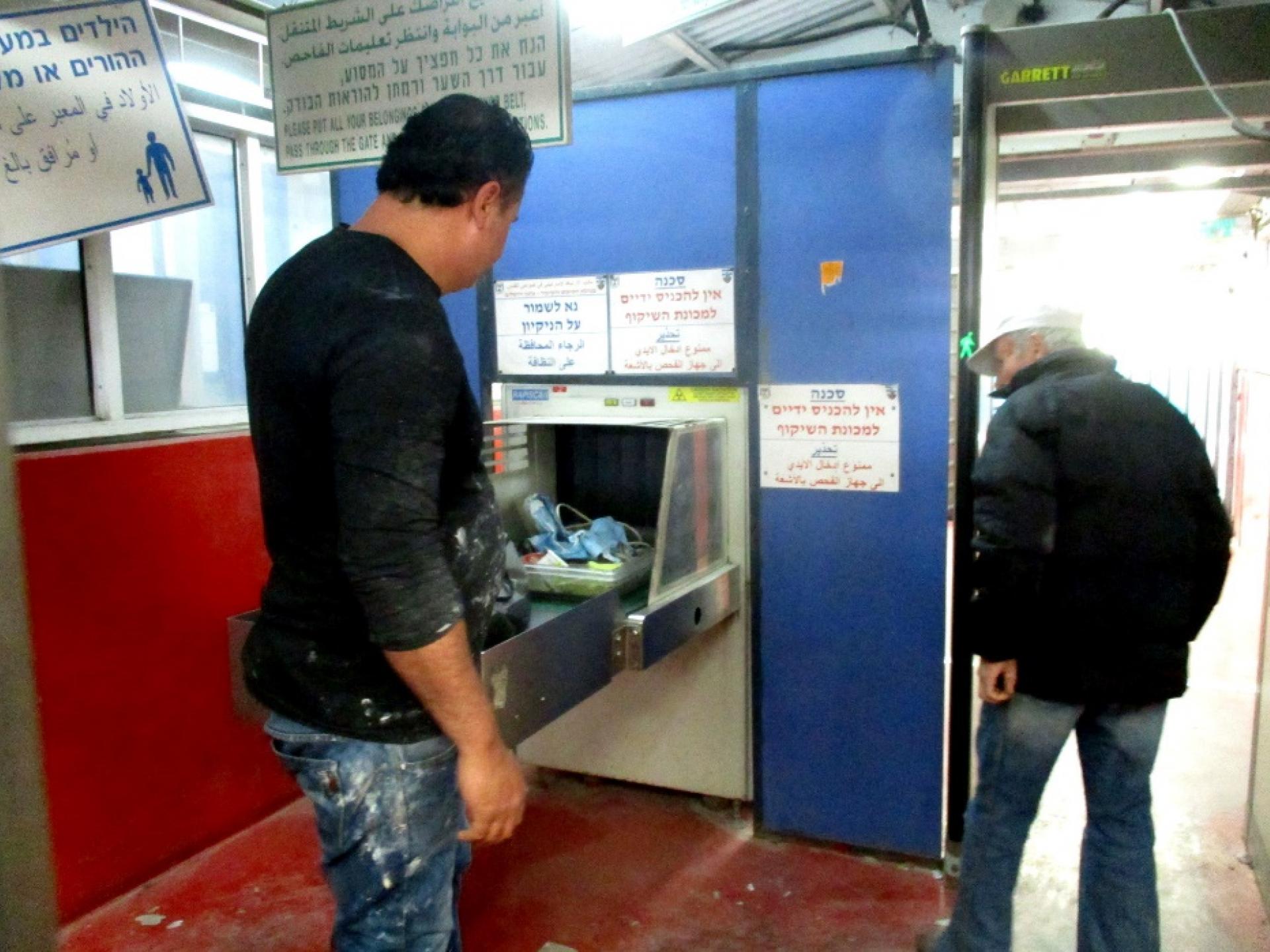 An old man at the checkpoint
Photographer:
Tamar Fleishman

So what did we have here? A woman-soldier with no-good x-ray eyes, an audience of dozens of people delayed, two men being ordered back and forth in the inspection area, and a knife that never existed.

And had there been a knife – what then?