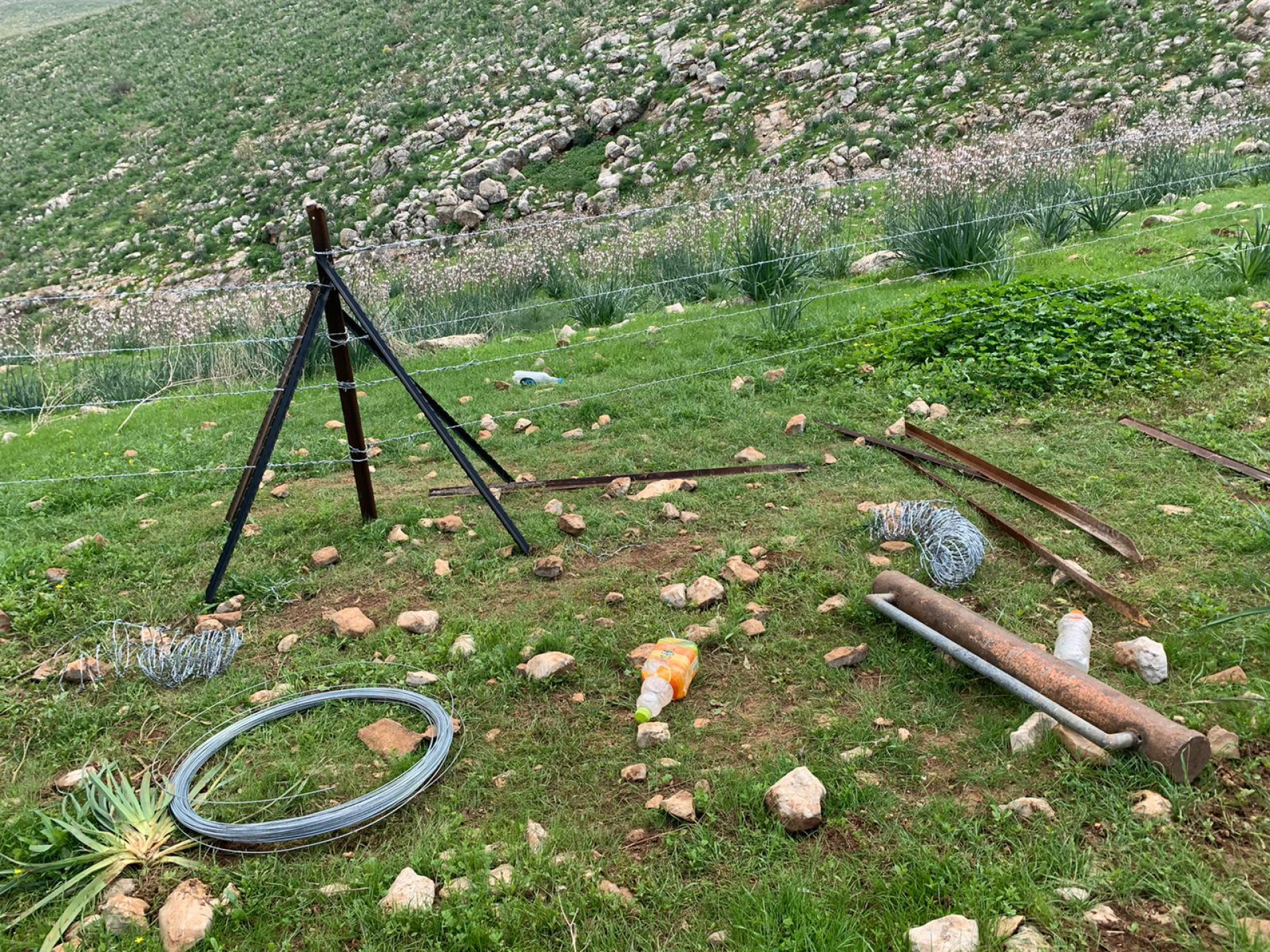 With the State’s approval: stealing land, inheriting it, possessing by erecting barbed wire fences – to make the locals disappear

The Jewish settler-colonist from the outpost at Umm Zuka erects a barbed wire fence on public land, south of Khalat Makhoul, which will prevent the Palestinian shepherds from reaching their grazing grounds

For three days now, the settler-colonist called “Uri” has been erecting a 1.5-m.-high barbed wire fence that will prevent the passage of the Palestinian shepherds’ flocks from Khalat Makhoul to their grazing grounds, south of the village. Since on the north side they border on the Umm Zuka nature preserve, they will have practically NO grazing grounds left.

The Palestinians are not allowed to graze herds inside the nature preserve, but the very same Uri has started an illegal outpost and keeps his own cattle there; he will be fined some hundred shekels for grazing there by the nature reserve authority. The fence begins at the north-eastern corner of the army base at Umm Zuka, and from there it proceeds east and south, probably to connect to the fence of the army base near Hemdat settler-colony, so that all the areas south of Khalat Makhoul will be barred to the Palestinians.

I photographed the army base's fence on the range above Khalat Makhoul, a few hundred meters from the actual encampment. Uri’s fence begins on its right-hand side, but is situated beyond the hill range and is invisible from Makhoul. Someone has photographed it from a short distance. One can plainly see that it is being erected.

No doubt the soldiers on the army base saw and heard what he had been doing. This base supplied Uri’s outpost with water at the time, until they got caught. Uri’s “punishment” for stealing water from the Israeli army (to say nothing of erecting an outpost on land that is not his) was to make him move deeper inside the nature preserve. Now he receives water by pipeline from the Hemdat settler-colony.

This person’s gall knows no limits. He arrived in the area three years ago and, ever since, has done whatever pleased him. Although he was issued a cease-and-desist order, he had rebuilt his outpost and expanded it. He attacks the neighboring Palestinian shepherds regularly, chases their flocks and scares the people. No official body, neither the army nor the police, has ever prevented or punished him for these acts. Mostly law enforcers collaborate in chasing the Palestinian shepherds from their grazing grounds.

Three other outposts were built in this way over the past three years. Together they dominate all parts of the northern Palestinian Jordan Valley and are united towards a single goal: to make it impossible for the Palestinian shepherd communities to exist there, and to make them leave the area.

Three families live in Makhoul with their 21 children and elderly parents. Their very meager livelihood is totally dependent on the flocks. It is of utmost importance to hurry and prevent the continuing construction of the fence before it is completed – later a demolition order would be necessary, and as far as I remember, no such order has ever been issued against the Jewish settler-colonists in the region. Conversely, the Palestinians have been issued dozens – perhaps even hundreds – of demolition orders.