Qalandiya. The humanitarian gate opened late and closed before all those in need were through | Machsomwatch
Skip to main content
Back to reports search page

Qalandiya. The humanitarian gate opened late and closed before all those in need were through

Another extremely difficult morning at Qalandiya, collapse of queues, and total inefficiency of D.C.O. personnel.

05.15. A dark, cold wintry morning. People huddled inside the coffee shop next to the parking-lot on the Israeli side.

On the Palestinian side, the queues already stretch well beyond the shed. All 5 checking stations are open, but checking is very slow, and very few people are admitted at each opening of the turnstiles. The queues grew, as did people’s frustration …

After six o’clock there were many already waiting at the humanitarian gate, but no sign of soldiers. Meanwhile people in the regular lines feel more frustrated – and the lines collapsed, with the usual result of crowds pushing, weaker people retiring to the benches, many move to the humanitarian gate to try their luck there.

Late as usual, a full complement of D.C.O. personnel arrive: an officer and two trainees. The officer goes to open the gate from the inside. At about 6.30 the first batch of people go through, but then it becomes clear that they haven’t opened the gate that leads to the checking stations. So the officer has to stop admitting people while he goes to open it. (Usually they open it on their way to the humanitarian gate.) This was the first sign of their incompetence, which only got worse later.

The officer returns to open the humanitarian gate when, for some reason, the trainees do not accompany him and it is unclear how they are supposed to learn their job. After a short while the officer disappears and of course passage through the humanitarian gate ceases. After some minutes – which feels eternity to those waiting – he returns together with a security guard. It seems that a team (armed and protected, of course) of officer and 2 soldiers aren’t enough to cope with people wanting to go through the gate!!! We hoped the presence of the guard would help cope with the complex situation… But it turns out that they do not open the gate because of a complaint they have against those waiting. We could not make out what the complaint was – perhaps they weren’t waiting in an orderly fashion, or that people who were not entitled were obstinately trying to use the gate. But the result was that for another 15 minutes women, children and sick people waited until the staff was kind enough to resume admittance through the humanitarian gate.

Meanwhile the guard gave instructions to the soldier in the cubicle when to open the turnstiles, so as to let in more people. It took a long time for the line in front of the humanitarian gate to clear. Meanwhile, the lines in front of the cages gradually re-formed. At the entrance to the leftmost one, where disturbances usually start, there stood a sturdy young man who imposed discipline. This lasted until it was his own turn to enter the cage, when once again the queue collapsed.

Towards 8 o’clock Mohammad (the Hadassah patient from the West Bank) arrived. As he had transport waiting for him, he did not need our help. But he had not been allowed through the vehicle checkpoint where he often passes. At first we did not recognize him, as his hair and beard have grown and he was looking so well. We were happy to hear from Daphna later that his test results have also been good. He was a ray of light on this awful morning…  The staff were already about to close the humanitarian gate, but all the time new people arrived. Mohammad was among the last to pass, and then the gate was closed. The D.C.O. team and the guard departed, leaving alone the soldier in the aquarium.

The queues were still very long, though orderly. Women and families with children continued to arrive, all hopefully approaching the humanitarian gate. At one stage we phoned to ask that someone come to open the gate because there were many children and infants. For once we received a true reply – they would try, but couldn’t promise.

Some people despaired and joined the regular line, while others continued waiting. Women with babies in their arms were allowed to fit into cage entrance, but others had to join at the end of the line. One woman with a small child and many parcels could hardly stand. In the end a young man helped her into the cage. Later we saw that someone had come to open the gate and admit families with children. 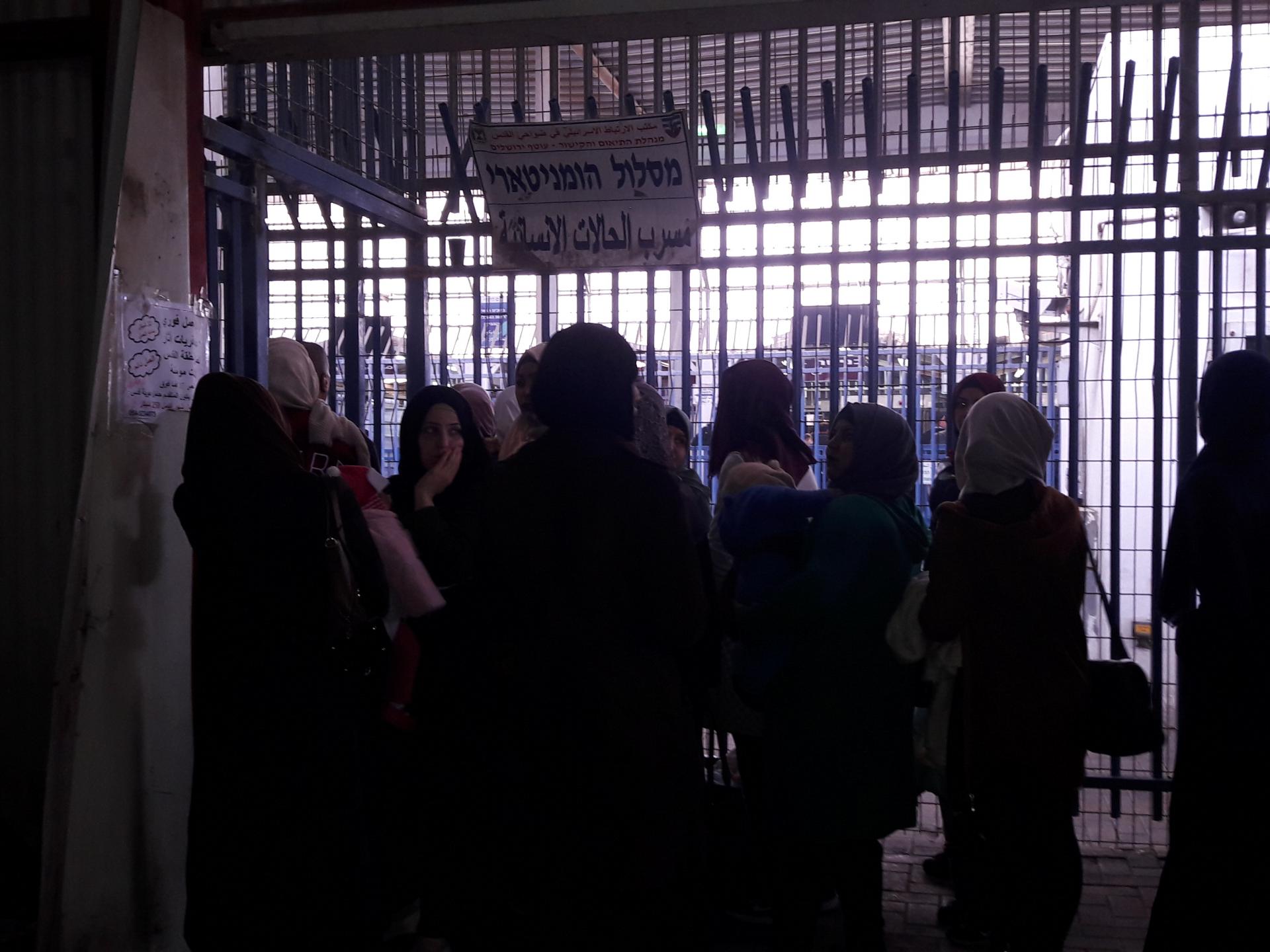 A line of women, some with children in their arms, waiting in vain at the humanitarian gate
Photo:
Ronit Dahan-Ramati

Meanwhile we met a foreign student living in Ramallah who was a bit frightened of the checkpoint. We suggested she join us, and together, only after 8.30 with the lines short enough for us to join one. In another line was a big group of women, some with children. They seemed to be an organized group on a tour.

After the stage of the cages, we still had to wait at the checking station. On the wall are notices there stating opening hours and conditions of using the post office and Ministry of the Interior office. 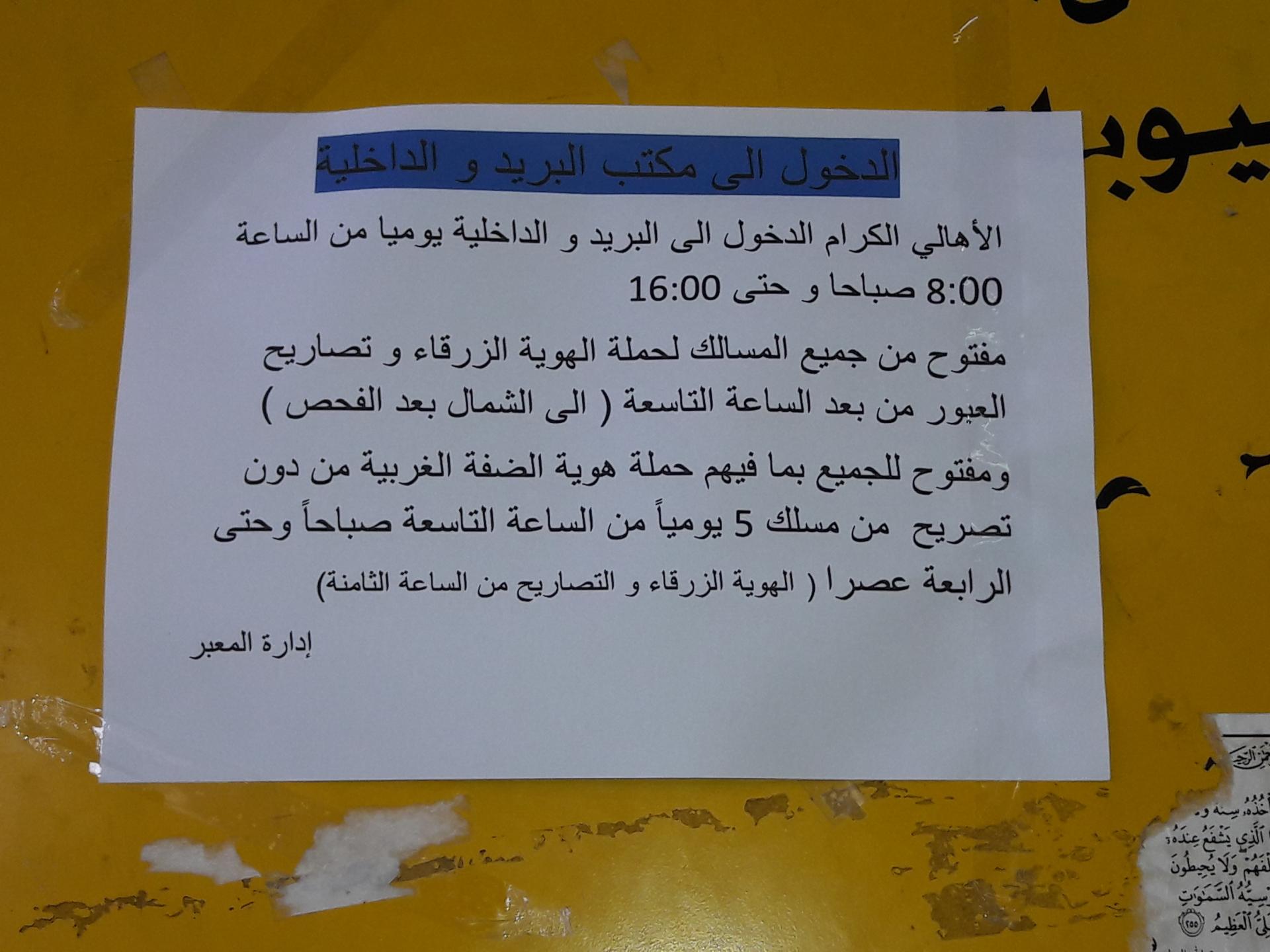 Sign giving hours and means of transfer to the post office and Ministry of the Interior
Photo:
Ronit Dahan-Ramati

After we passed through we noticed that two D.C.O. officers had arrived apparently to open the gate again, but they were not doing so at the time. As far as we could see, the two (one from the morning and another officer) stood but did not do anything to relieve the situation. Indeed, today was an exceptional case of D.C.O. inefficiency…

When it was at last our turn at the checking station, we had no problem. The Palestinian woman ahead of us had to remove her veil in front of the male soldier. There was too much stress to spare time to call a woman soldier. By the time we were through our check, she had rearranged her veil so that once again only her eyes were visible.

We finally reached the Israel side at 9.30!!