Qalandiya. Permit holders move quickly, however the checkpoint plaza is neglected, the toilets are filthy and dirt and trash is everywhere 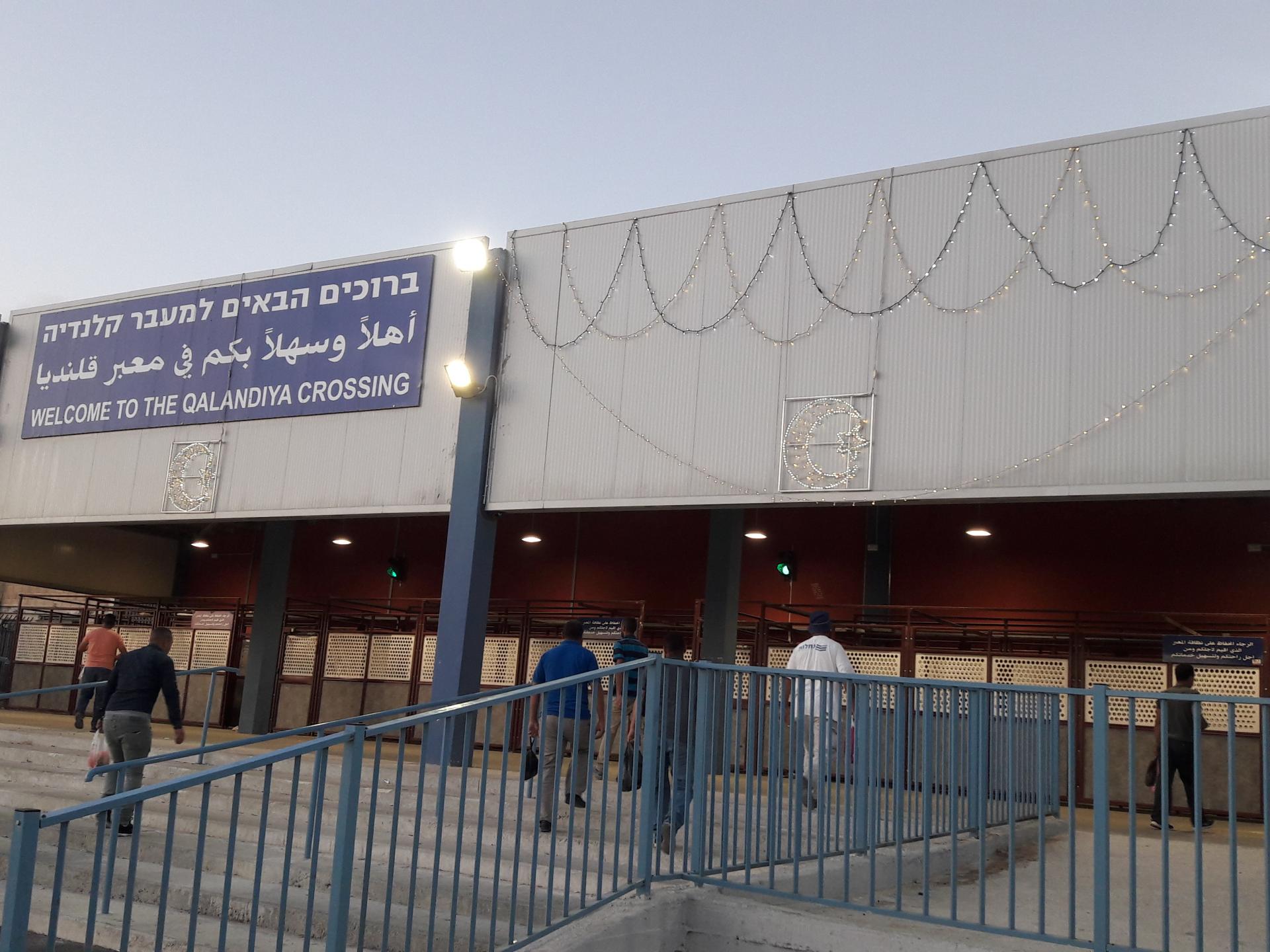 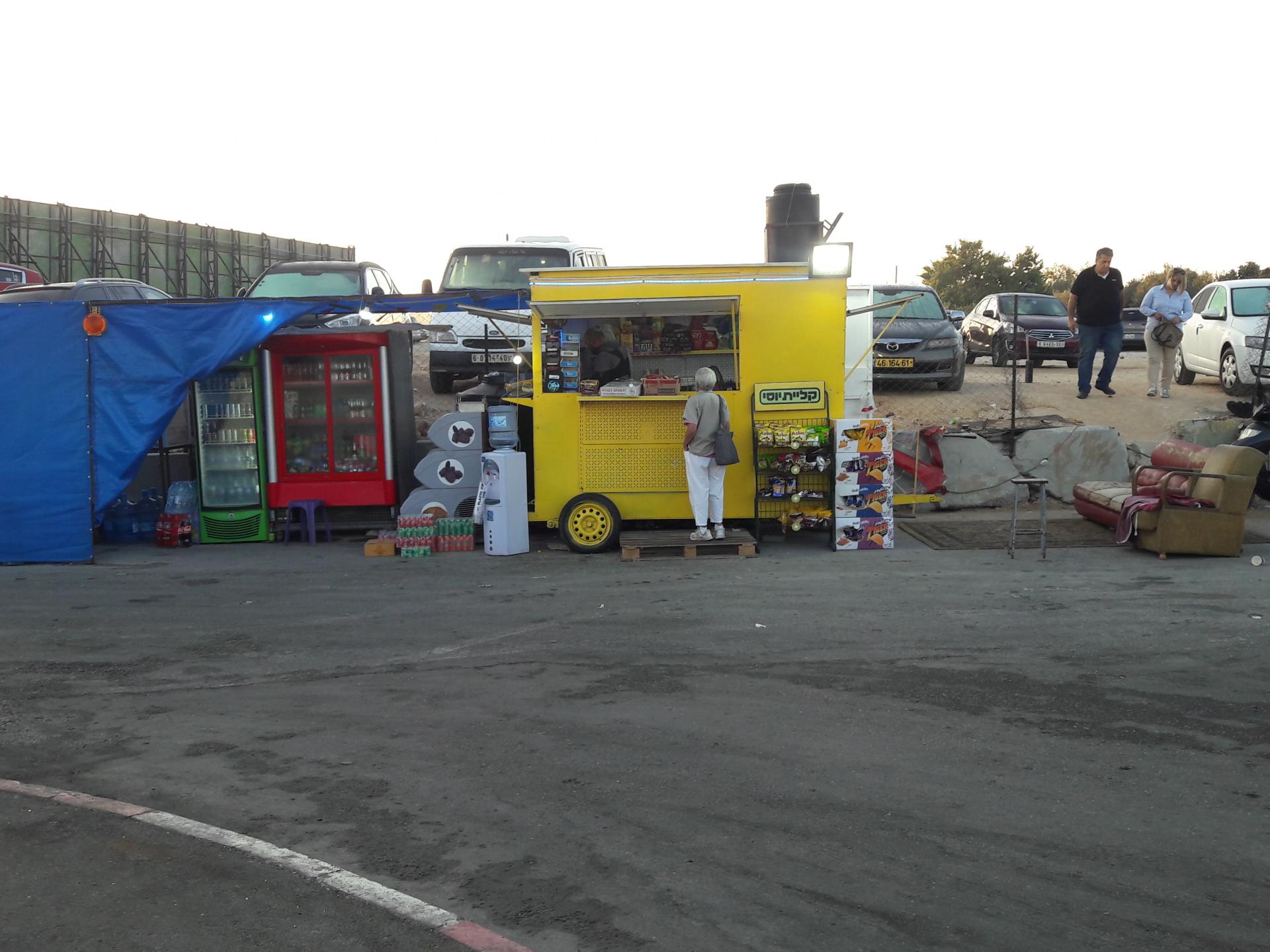 The kiosk moved across the road by the parking 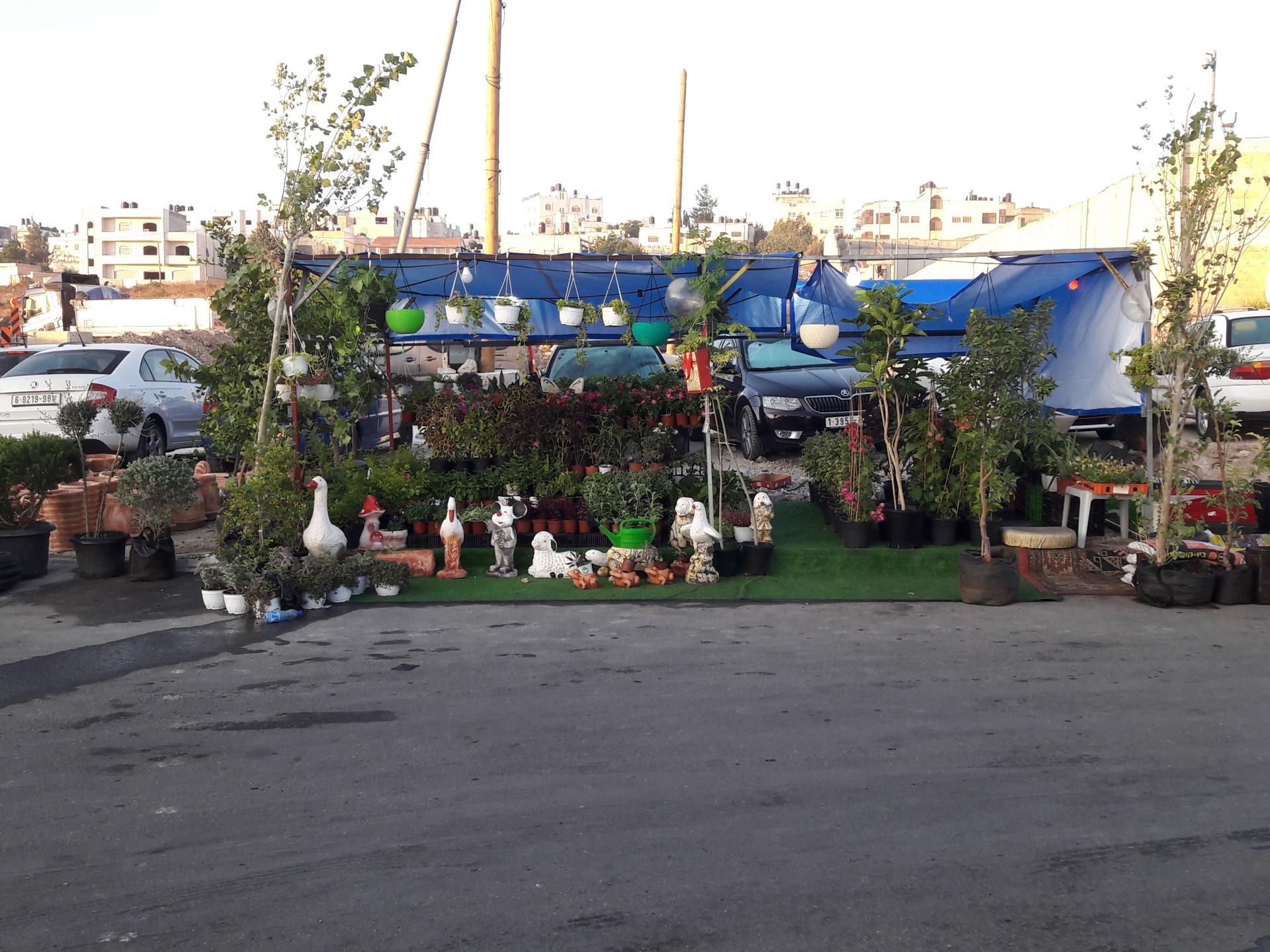 A small nursery was erected in the place of the kiosk 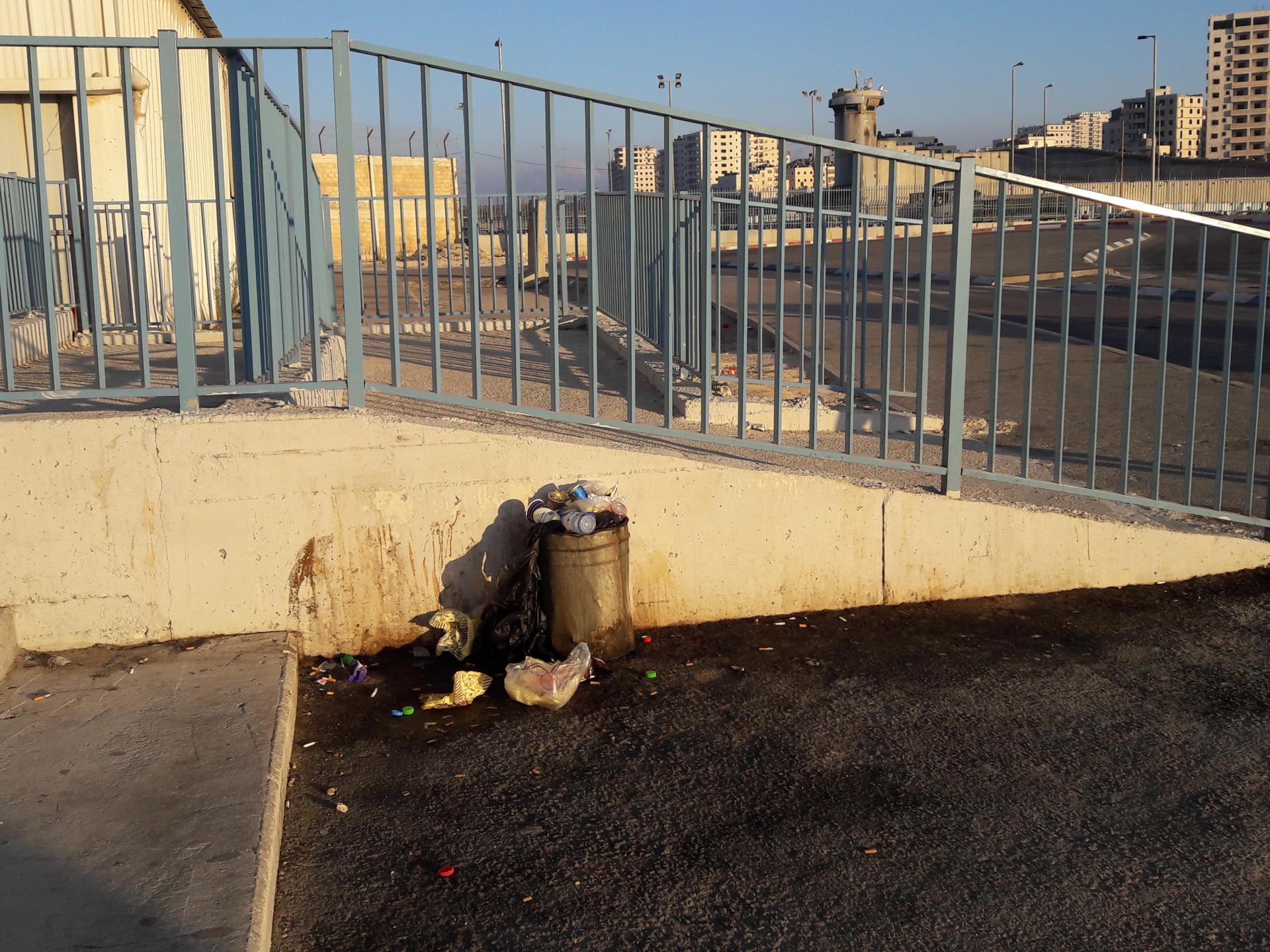 A makeshift trash can at the entrance to the checkpoint 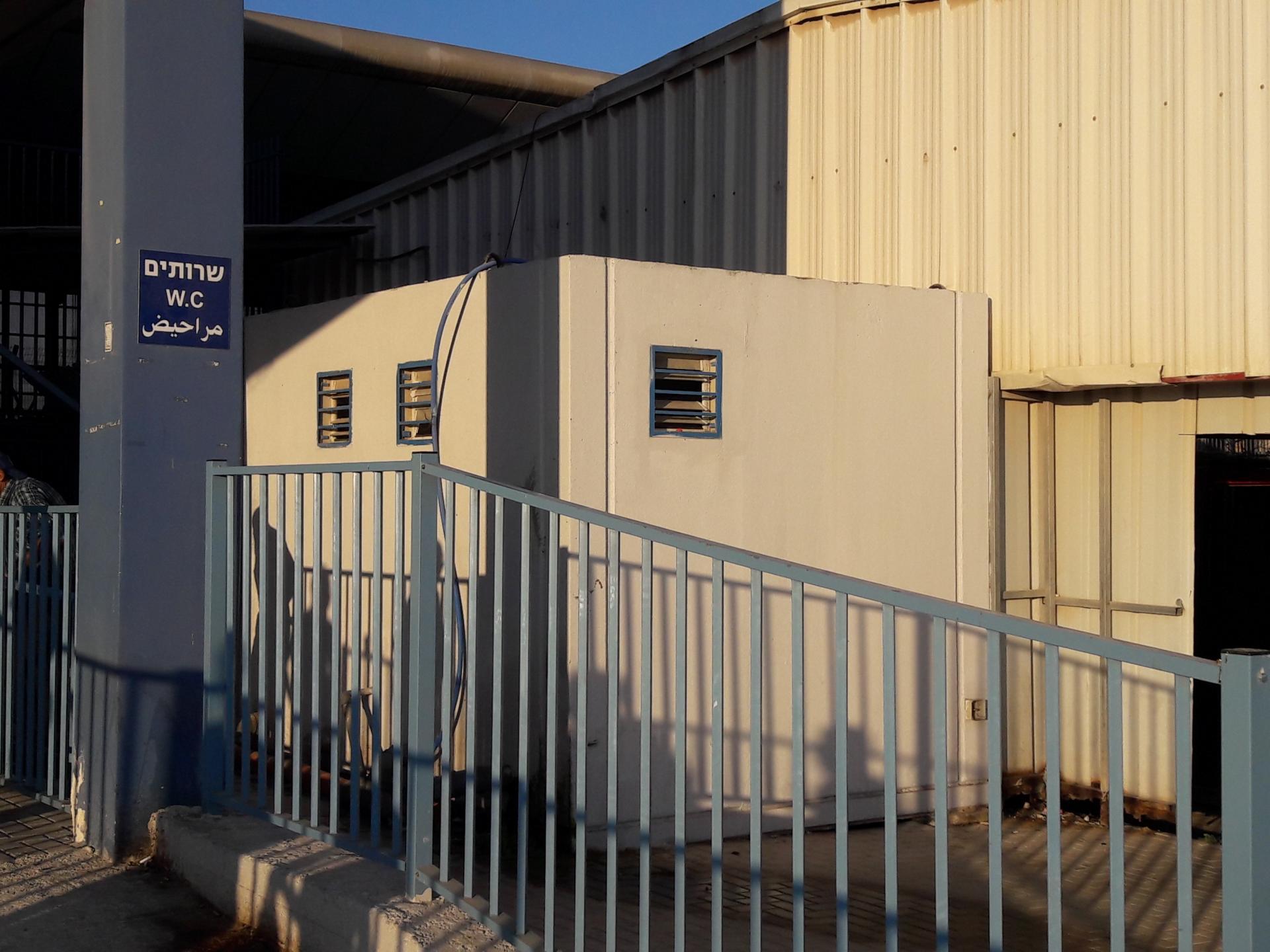 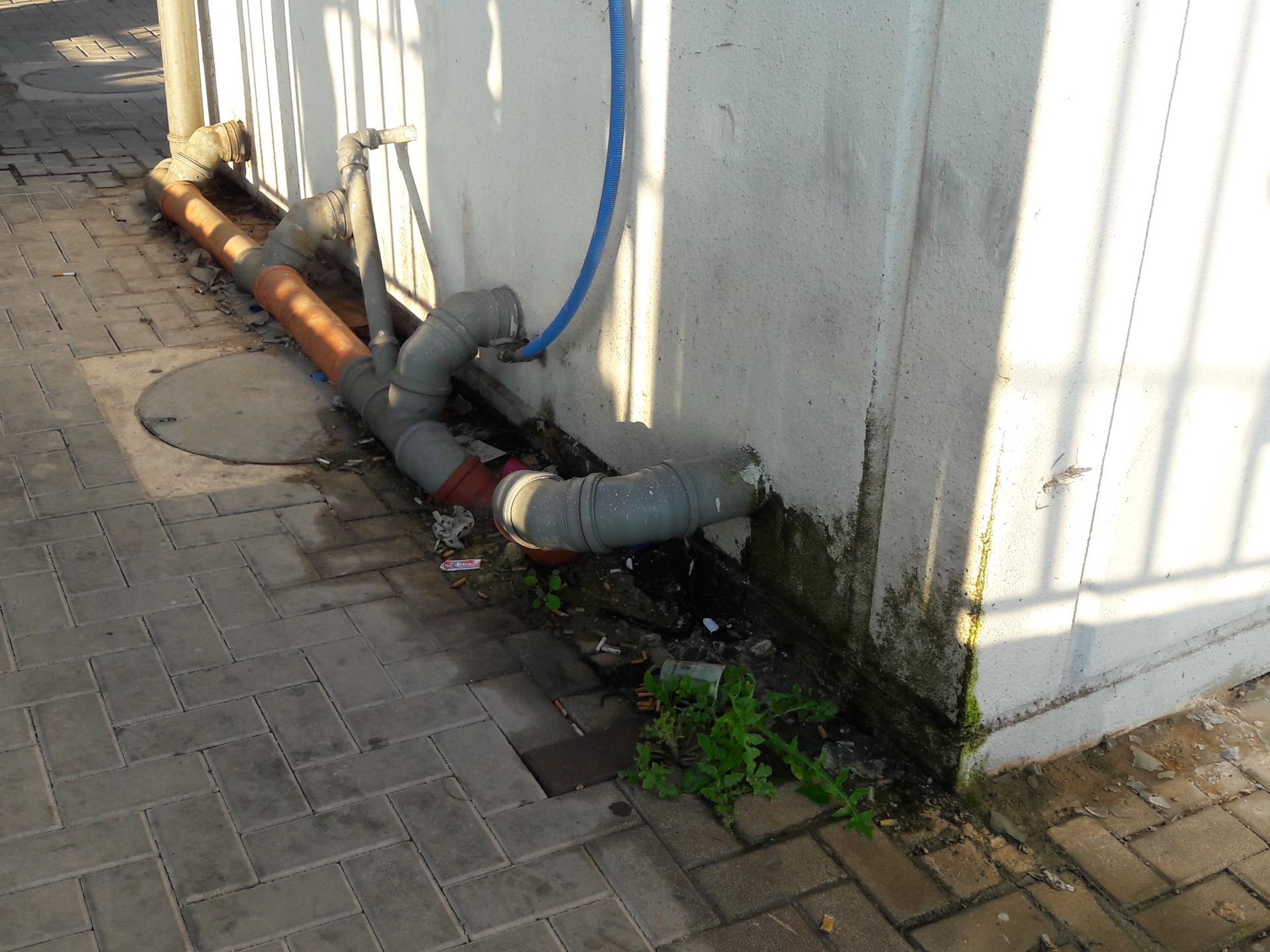 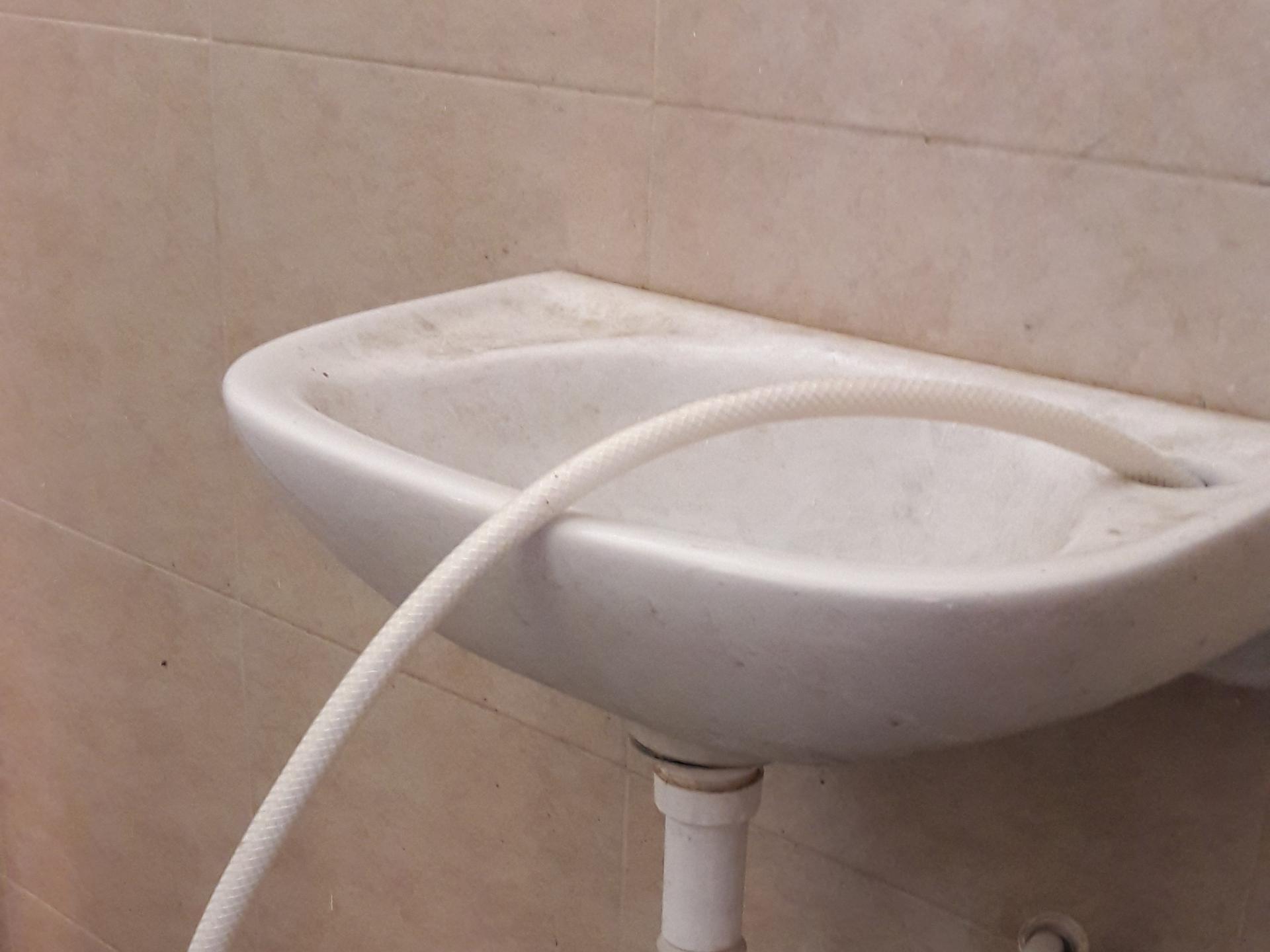 Sink without faucet in the women toilet 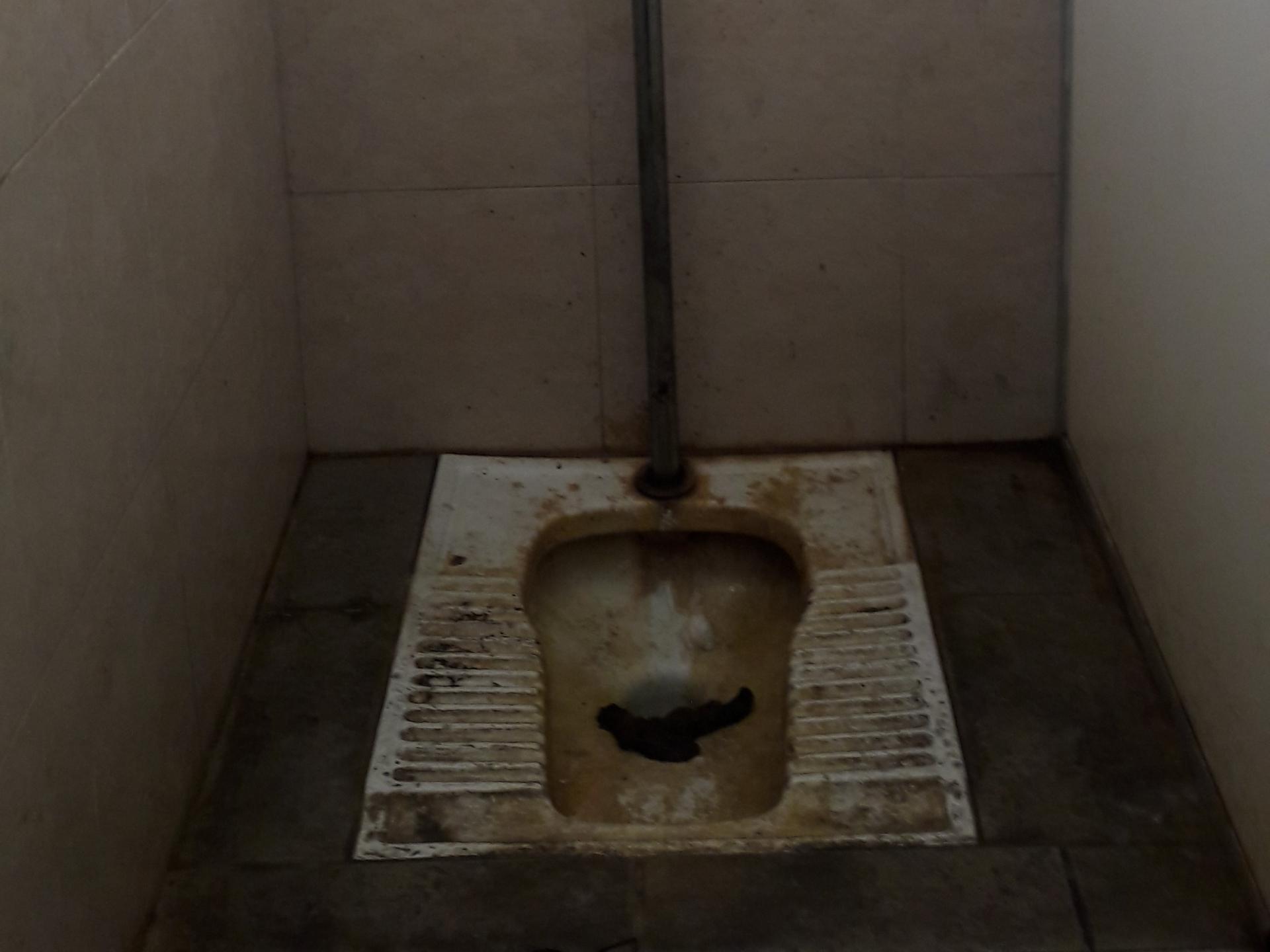 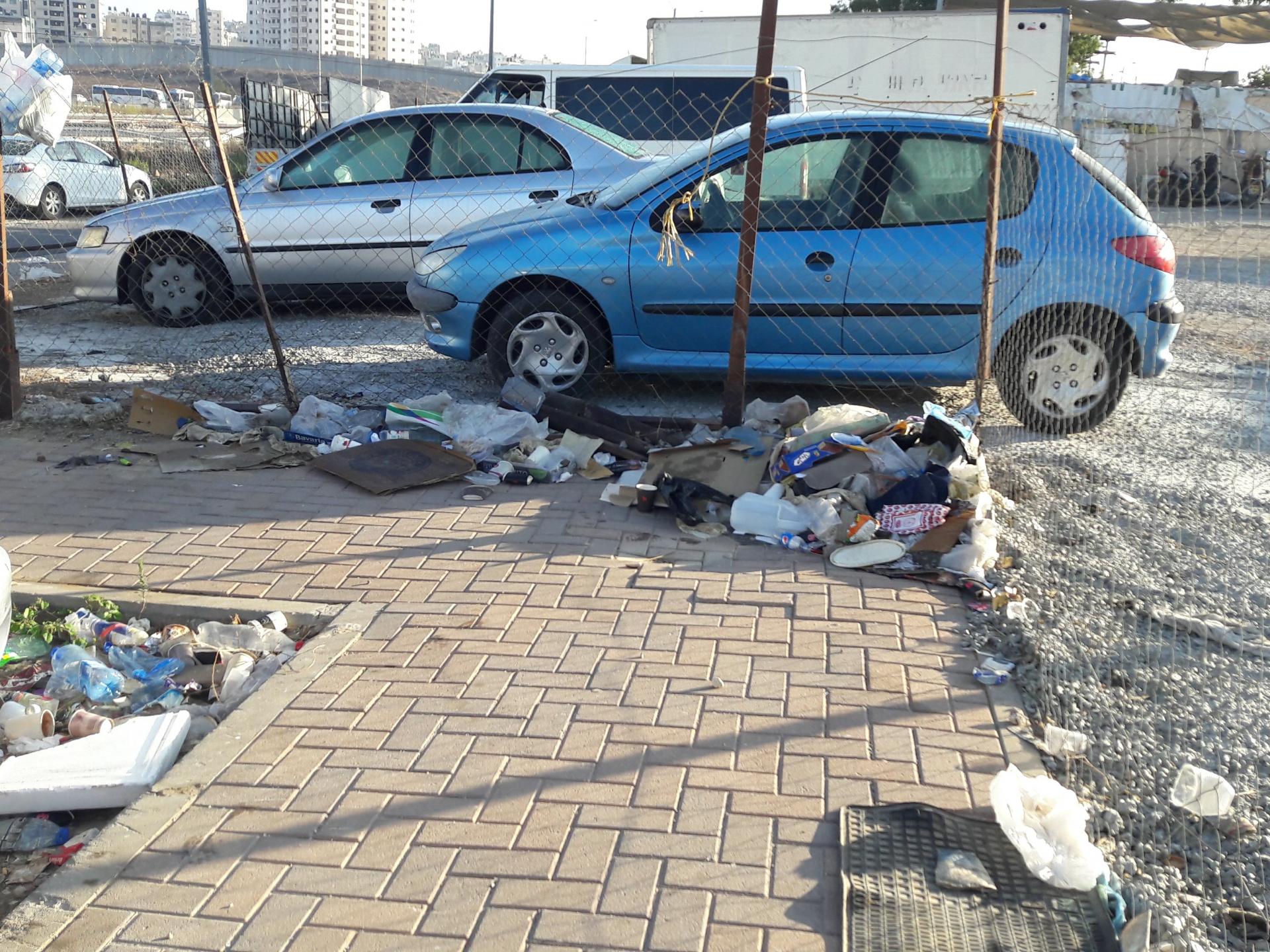 Trash in the parking area on the Israeli side 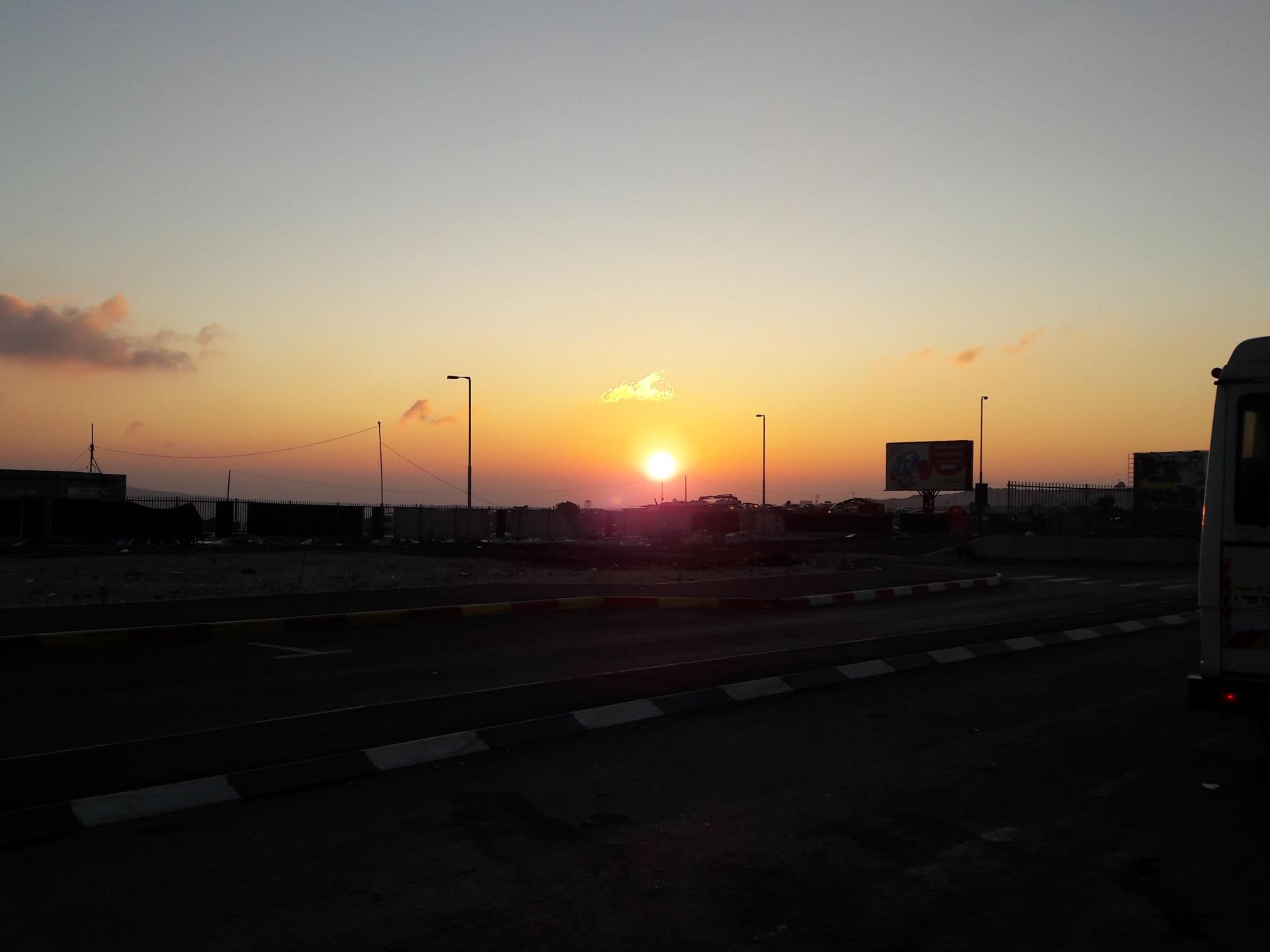 We returned to Qalandiya after a month’s absence. The improved conditions make passage so much quicker that it is unnecessary to come as frequently as in the past.

The road approaching the checkpoint is still under repair. We had hoped that by now there would be more improvement both on the main road and in the area close to the Israel side of the checkpoint. In the long road which has always been so dark on early winter mornings (there are lamps, but not lit), the work is still under way and it looks as if this stretch will still be dangerously dark when winter comes. There are no sidewalks and it is hard to distinguish pedestrians walking on the side.  We should note that this is in Jerusalem municipality’s jurisdiction.

We arrived shortly after 6 a.m. On the way we saw many workers waiting for their transport, both at the café next to the parking lot and against the wall across the road.

There were still strings of lights on both Israel and Palestinian sides of the checkpoint, in honor of the recent Eid.

We met our old friend, a teacher, who says that now everything is fine. He is on his way to prepare his program for the school year which begins this Shabbat. Abu Ramzi, the beigel seller, is in his usual spot at the bottom of the steps, next to a bench. The tea kiosk is at the parking lot next to the entrance to the area, coming from A-Ram.  When we went there to buy tea we found it had moved across the road. The owner said that there had been a fire in the previous one.  But now in its place is a very nice little plant nursery, which he also owns. The kiosk at the entrance coming from Qalandiya is closed. Presumably it isn’t worthwhile opening it early in the morning.

The new checkpoint has now been open half a year. Everyone agrees that conditions in the morning have improved tremendously for those who have permits. (But remember that the severe system for issuing permits still exists. Even someone who has a permit today could tomorrow be refused… ). We no longer have the sights of pushing and collapsing of long queues. Movement was smooth all the time (about an hour) that we were there, although many people kept arriving.  All three entrances were open and there were no delays. At one point two policemen (perhaps one policeman and a guard) came outside and returned. They have a card that opens the door next to the ‘slalom’ (the winding passages inside), which enables them to enter without passing turnstiles.

Now that there has been this improvement in entering Israel for those with permits, isn’t it time to improve the surroundings? Note that after 8 o’clock the various offices open to serve the public – post office, D.C.O., Ministry of the Interior. People come from far and wide.

In all the wide area in front of the checkpoint there is nowhere to sit. Anyone arriving early for the above, or people who are allowed to enter Israel only after 8, have to stand around, or resort to one of the tatty benches in the old shed. After sunrise the whole area is open to the sun which reaches even under the awning at the entrance to the checkpoint at certain stages of the day.

There are no trashcans. Two plastic containers (possibly put there by the Palestinians themselves) are overflowing. Is it surprising, then, that people drop litter on the floor?

There is a sign on a pillar saying “Toilets,” referring the the cubicle which still remain from the old checkpoint. One has to go down a little path to reach it. The innovation since the move to the new checkpoint is that nowadays the doors to the toilets are generally open, whereas in the old days they were mostly locked. There is a leak from the pipe behind the cubicle – which we noticed already a month ago…   In each of the men’s and women’s sections there are 2 toilets and a washbasin. The fact that there is a basin does not ensure that there is a connecting pipe or water.

The toilets (crouching style) were filthy. There was water for flushing but the situation was too catastrophic for this to help, with feces even streaked on the wall in the men’s toilet. Needless to say, there is no toilet paper. Is it not possible to provide and maintain reasonable toilet facilities? Fortunately, in the old shed there is still one water tap working where we could wash hands.  We fled from the stench.

Outside people were still streaming in. Two years ago, about 6 months before they started working on the new building, the area that had served as a parking lot was closed off, mostly by metal sheets. After about a year, some of the work was completed, and an entry road was paved and opened from the direction of Al-Ram, with a barrier at the entry point. At the beginning this barrier was kept open. Once the new checkpoint has opened, this entry barrier has been closed and only public transport can enter. Most of the area that had been a parking lot is now empty and abandoned, without access for cars. As a result, even now, half a year since opening the new building, there is shortage of parking space and no public parking that is not for payment. It is unclear why this big area isn’t paved and signed, and once again used for parking.  [Are there other plans for it?]

7.10. We started our return, through one of the entrances to a passage (‘slalom’ in our jargon) with a turnstile at its end. After the turnstile are two turnstiles that open to the bag-checking area. After the screening machine is another turnstile. 5 people at a time are admitted to the screening machine. After all have passed this, the turnstile opens to release everyone to the permit-checking stage which is mostly automated. The machines are operated by soldiers who sit in a reinforced cubicle. In each cubicle site 4 soldiers operating 2 screening machines, one on each side. That is to say, there are 3 cubicles with 6 such stations.

Most of the Palestinians today pass through the electronic checks and are not delayed. We go to a personal checking to show our Israeli Identity cards. In the morning there are not usually any delays.(When we come later in the day, sometimes the soldiers don’t understand why we are there, and a policeman or guard who knows us quickly comes to our help.) Altogether, although not all the bag-checking positions were working and there were small queues, passage took less than 5 minutes.

Back on the Israel side, which without doubt is Jerusalem’s responsibility, we know that sometimes the municipality sends road cleaners. At present the roadworks add to the difficulty of cleaning. But there are places that are never cleaned, as, for instance, the public parking place. When the work on the roads and circles is finally finished, could Jerusalem Municipality do a thorough cleaning?