On Wednesday, July 20, at 02:30, a loud explosion was heard from the bedroom of the house of Muhammad Dawabshe, the cousin of Sa'ad Dawabshe who was burned to death by Jewish terrorists one year ago.  Within a few minutes, there was a huge conflagration which overcame other parts of the house. Firefighters arrived half an hour later, but without water to put out the fire.  The Israeli and Palestinian DCO determined that settlers had started the fire.  The possibility of another sort of crime or of an electrical cause was eliminated. 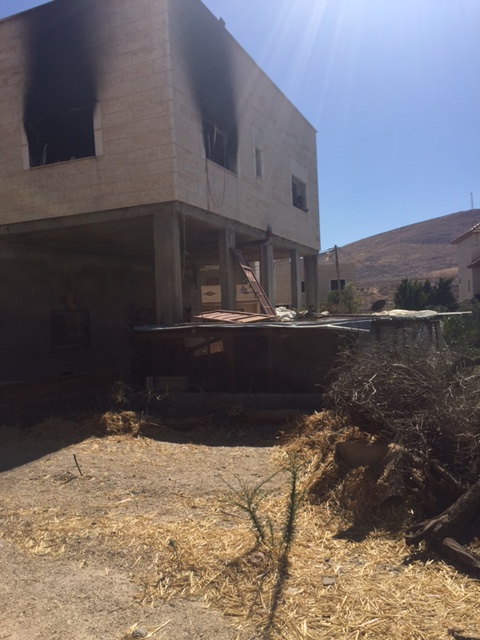 (At the request of Nurit and Raya we went to Duma after the arson of the previous night).

This isn't a regular report, but a shocking story of another house belonging to the Dawabshe family which had been set on fire the day before, Wed., July 20, in the morning.

Muhammad Raki Abdelfatah Dawabshe is the cousin of Sa'ad Dawabshe whose house was burned by settlers exactly one year ago, a fire which killed him, his wife and their son.  Today, the son, Ahmad, who survived the blast, was released from the Tel HaShomer hospital.

On Wednesday, 20.7, at 02:30, Muhammad's wife heard noise outside their house and asked her husband to go out and check out what was happening.  He went up to the second floor, looked around, saw that everything was in order and went back to sleep.  But his wife was not satisfied and asked him to also go outside.

He went out, looked among the olive trees which surround their house, the chicken coop, the sheep pen nearby, and didn't see any problem.  A few minutes later, they heard a blast which came from a bedroom and, within a minute, everything was on fire.  He got out of his bedroom and ran to the children's room where his wife was, got them out and onto the roof.  Within a few minutes, the bedroom and the kitchen next to it were reduced to ashes from the strength of the fire, the plaster from the walls and the roof peeled out and only the exposed cement blocks remained.  Only an iron frame remained from the bed, while the windows had burst from the blast.  A terrifying sight.  From the children's room, only one of the children's burnt shoe was left. 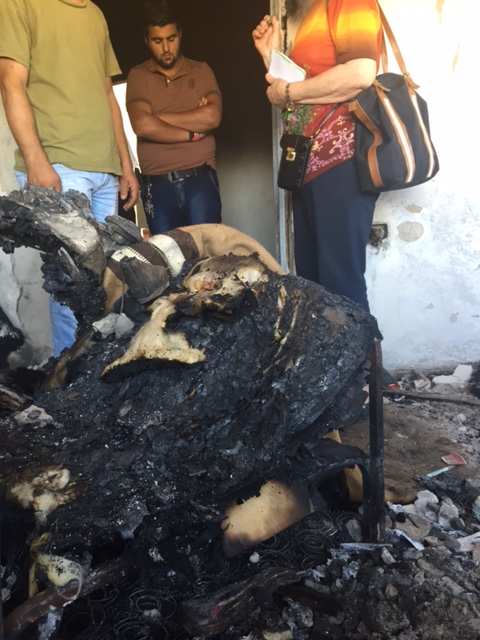 The fire-fighting servies in Burin arrived half an hour later - but they haven't had any water for the past 25 days, so they were't able to do anything but stand there and watch as the fire consumed the house.

When we asked who was responsible for this terrible crime, the owner of the house answered with confidence that only the settlers were capable of doing something like this.  He dismissed the possibility of a molotov cocktail, and said that whoever threw the bomb had more sophisticated equpment otherwise the bomb wouldn't have reached the window of the second floor which is quite high off the ground.

IDF forces arrived at the house, who decided that an electrical short circuit had caused the fire.  But they didn't pay attention to the face that the light was on in all the rest of the house, except for the room where the fire started, which proved that this was not an electrical failure.  They invited the GSS, who brought along a registered electrician who checked the electric box and determined that there was no short circuit and everything was in order, and pointed out, as proof, that the lights were all still on.

After a little while, the police arrived, who said that perhaps this was an act of revenge of one of his enemies.  To this, the house owner replied that he had property next to the house which was worth 200,000 NIS:  cattle, sheep, storehouses.  If he really had enemies, they would have destroyed his property.  Besides that, he doesn't have any enemies and all the family love him.  Whoever did this intended to kill the people who were in the house.

Later on, the Israeli and Palestinian DCO arrived.  The Palestinian DCO and police determined that this was an act of the settlers and dismissed the possibility of a criminal act or electrical failure.

It is important to note that this occurred 3 days after one of those guilty of the arson in the house of Sa'ad Dawabshe was released from jail.

The checkpoint at Za'atra was manned with 3 military jeeps.  Soldiers checked Palestinian cars and there were 2 soldiers guarding each of the bus stops.

At the entrance to the village of Kifel Harith, next to the tower, there were also 3 military jeeps.

This is a Palestinian located north-west of the settler-colony town of Ariel, 18 kilometers south of the city of Nablus. It numbers 3, 206 inhabitants, as of 2007. 42% of the village lands lie in Area B, and 58% in Area C. In 1978, some hundreds of dunams of the village’s farmland was sequestered in order to found the settler-colony of Ariel – in total 5,184 dunams from the Palestinian communities of Salfit, Iscaqa, Marda, and Kifl Harith. Dozens of square kilometers were also confiscated for paving road no. 5 as well as road 505 and their buffer zones, and the Israeli electricity company’s power station. Over the years the village has suffered harassment by sometimes-armed settler-colonists, even casualties. In 1968 the army’s rabbinate ruled the maqam site Nabi Yanoun (sanctified grave of the Prophet Yanoun) is in fact the tomb of Joshua, Son of Nun. Another structure in the village, named Nabi Tul Kifl by the Palestinians, has been identified by the Israeli authorities as to the tomb of Caleb, Son of Yefuneh. These sites are located in the heart of the village, near the mosque, and at times of Jewish religious festivities and pilgrimages, the center of the village is illuminated by projectors and thousands of Jews arrive, protected by hundreds of Israeli soldiers. During such a period, a night curfew is imposed on the village and the villagers are forced to stay shut inside their homes.

A village in the Nablus governorate, with 3,000 residents. They owned some 18,000 dunams, 500 dunams of which the village itself was built. However, after the settlement of Migdaleim annexed a large part of their land, their area was reduced to only 2,000 dunams.

On July 31, 2015, two houses in the town were torched with petrol bombs.  Sa'ad and Riham Dawabsha, and their infant, Ali Sa'ad Dawabsha, were burned to death. Another son was seriously injured. "Revenge" and "King Messiah" were spray painted on the walls of the house. The trial of the arsonist, the settler Amiram Ben Uliel, is still underway (2019), and a plea bargain was signed in May 2018 with the minor who participated in the planning of the arson.

imposed by the army, the poor roads that they are forced use due to the lack of paving permits from the Civil Administration, along with the lack of public transportation, all these difficulties cut off the village from nearby Nablus and Ramallah.