05.10. Bitterly cold. Bad enough doing this one morning a week and knowing we’ll be returning to warm homes. Hard to imagine how the workers go through this, for hours, daily.

When we arrived there were long lines outside. The fifth checking station was, as usual lately, closed.  It opened for a few minutes at 6, but closed again to reopen only at 6.30. The soldiers operating the turnstiles opened them (on the whole – see later) fairly regularly and let in a good number of people, but progress at the checking stations themselves seemed very slow, and long lines developed there.

An acquaintance we chatted with in the queue reported that at Givat Zeev a number of cars had been confiscated by Border Police on the grounds of their blocking the checkpoint. He also pointed out to us a young woman waiting at the entrance to the cage – a few days ago, he told us, in the tunnel at Binyanei Ha-uma, a haredi man kicked her in the back.  Now she is afraid to go there unaccompanied.

By 6.20 a number of people had gathered at the humanitarian gate. We phoned, to be told that the D.C.O. staff were on their way. It must have been a long way, because the officer and his guard arrived only at 6.30.  But they did remain on duty until 8 o’clock.

As people got frustrated by the slow progress, the not unexpected collapse of the lines occurred at 7.10. 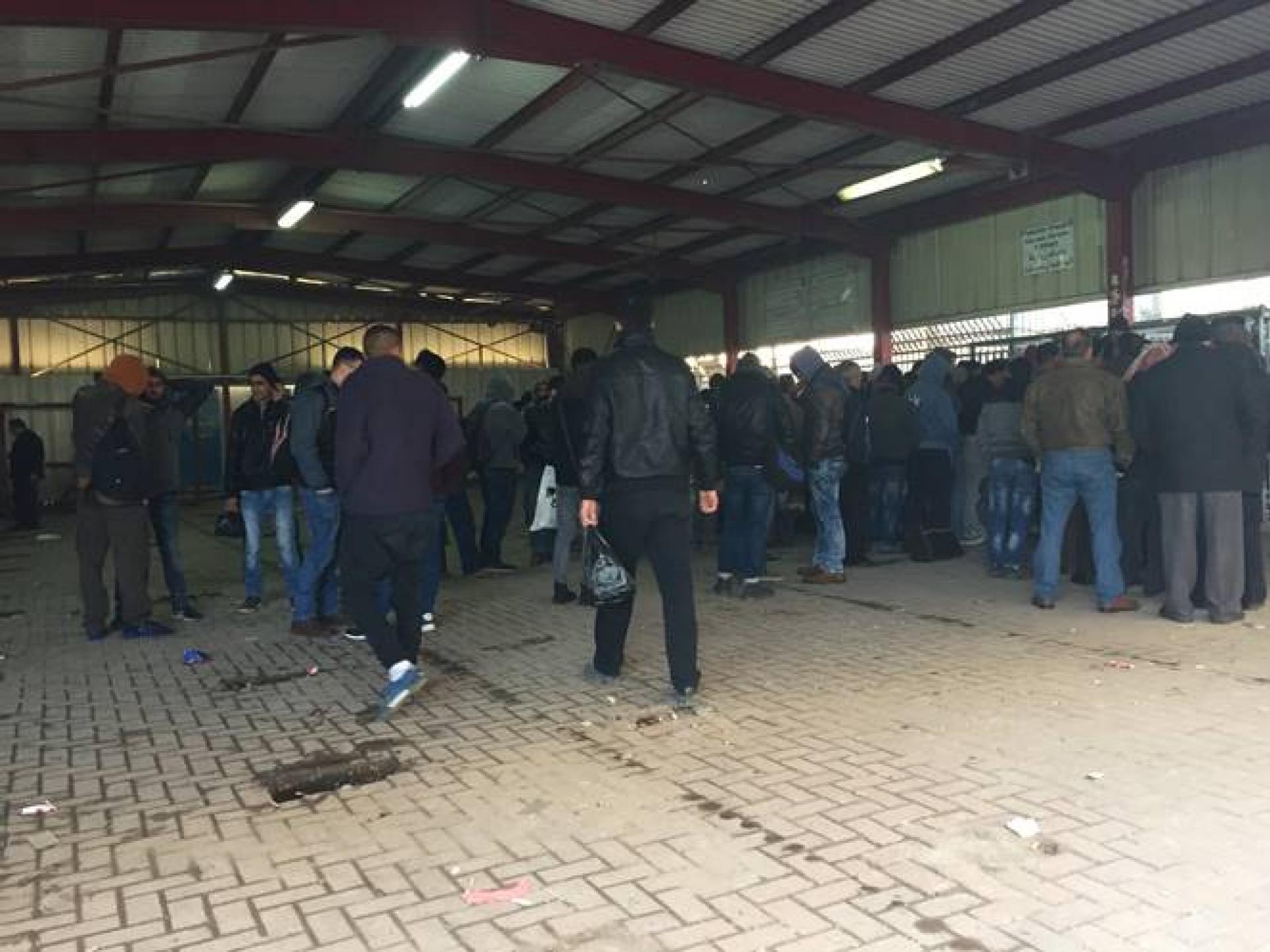 They did, however, re-form within 20 minutes. When the lines collapse this leaves space in the shed to walk through, so we used the opportunity to go outside.  We found the metal fences bordering the ‘walkway” from the road to the shed half blown down and broken by the fierce winds of recent days. We also met a man sitting outside.  He said he had stood in line since 6 o’clock.. As he has back trouble he was afraid to join in the melee at the cage entrance. Anyone who has seen the fighting,  shoving and sometimes punching at the entrance to the sleeve

can  well understand this. No wonder that some who are luckier and whose employers take into consideration the problems of the morning so and sit on the  benches to wait. 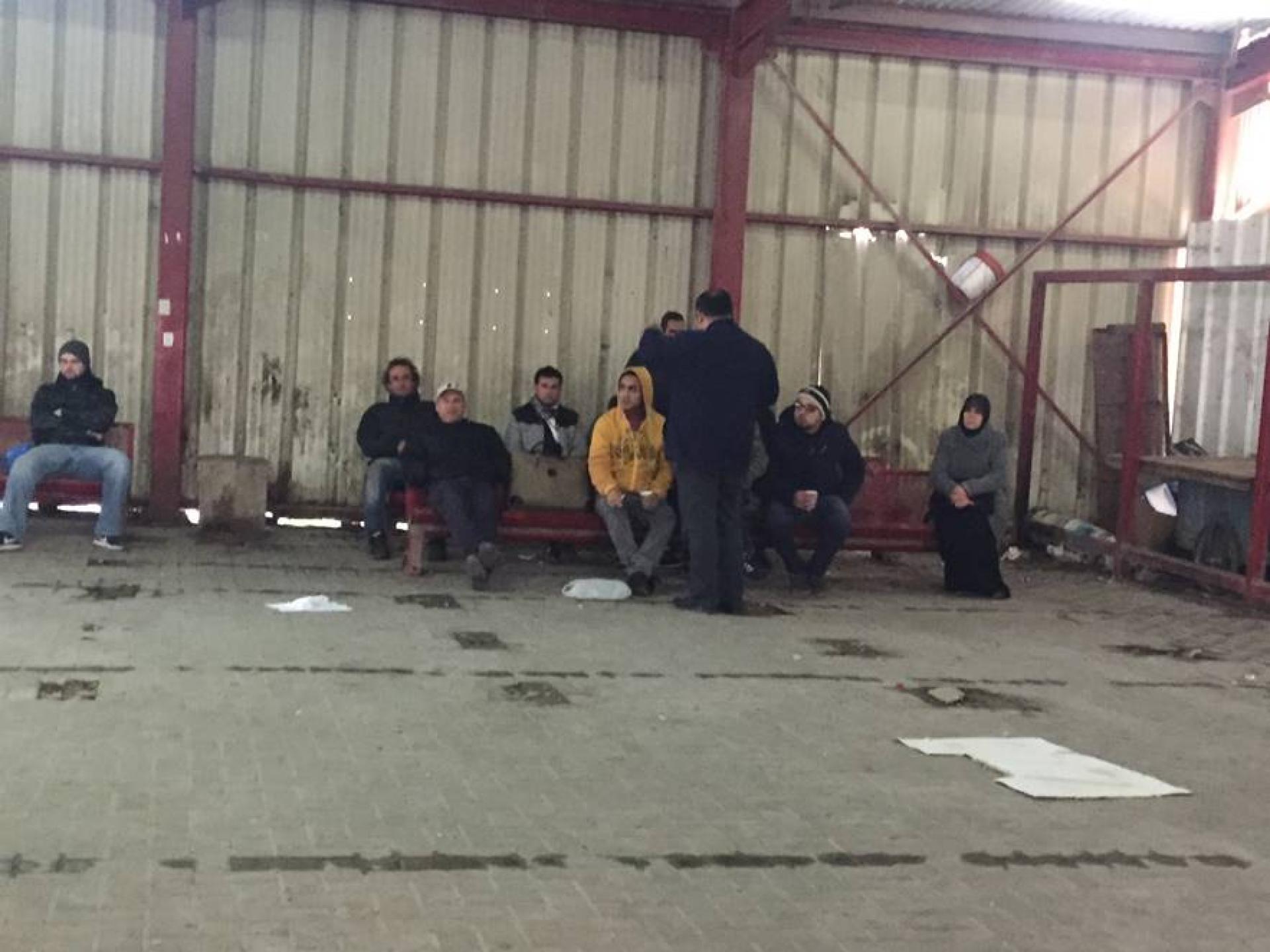 When he phoned his employer in Atarot he was told that if he couldn’t reach work by 7, not to come at all. So he had lost his day’s work. We found him and his friend with their lunch bags sitting disconsolately before returned home. What more could we do than sympathize and listen and say we would write about it. And this happens so often.  Maybe not only the day is lost but also the job. 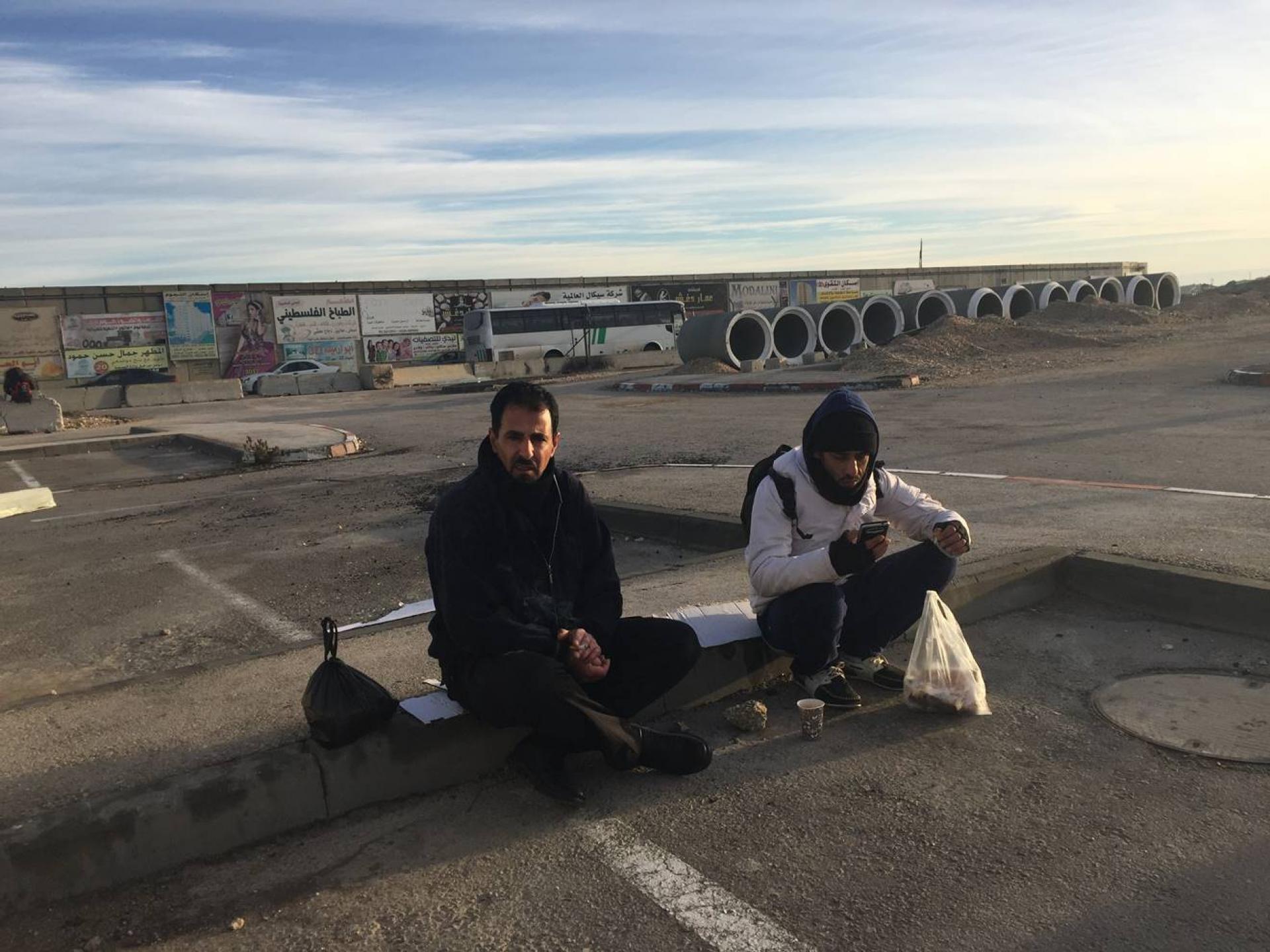 A group of women were turned back from the humanitarian gate and returned to the general queue. As this happened at 7.55, this seemed to us rather over-strict application of the rules, even if they were “8 o’clockers.”

At 8.02 we joined a line, at the entrance to a cage.  We stood in the cage a full 20 minutes, without being able to interest the soldier in the aquarium. At one stage a big policeman arrived, peered through the window and did something with his smartphone (photographing him?), but did nothing further – and refused to talk to us. But the soldier then did bestir himself and finally opened the turnstile. In all it took us 40 minutes from entering the cage to exiting the checkpoint.  This can hint at the long wait people must have when they arrive at the end of a line reaching at least halfway to the road.

This time we saw the sign about sexual harassment in front of us but since then other people have said that it is on the usual egged buses as well.