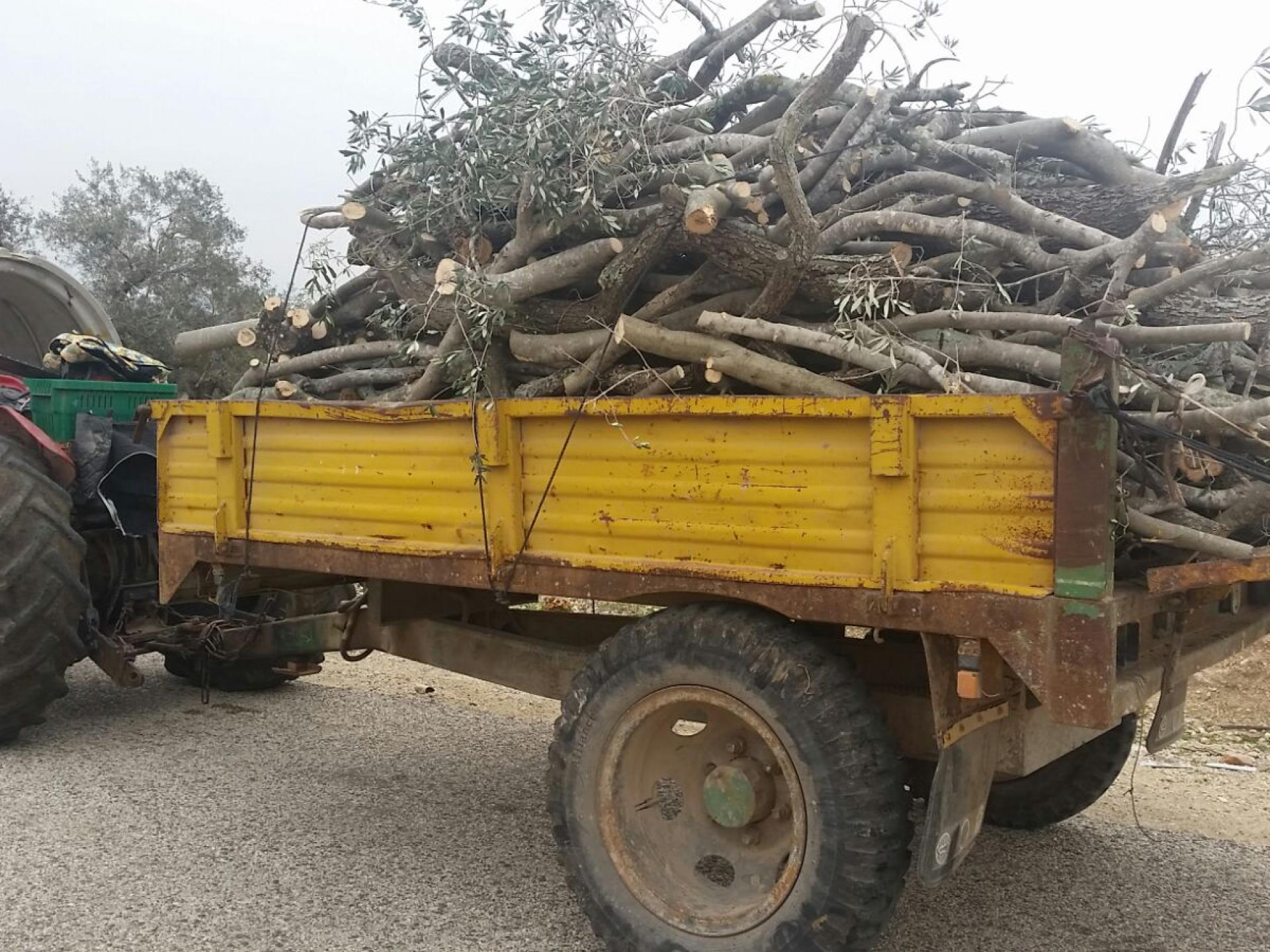 After the olive harvest is over people prune the trees and bring the wood home to heat their houses.
Photographer:
Shula Nachmias

14:00 – We drove by Reihan – Barta'a Checkpoint.  Shula, who had not been to the Palestinian side of the checkpoint for a long time, was amazed at the crowded parking lots.  We drove through Emricha and the new fence is in place and the gate to the shortcut to Yaabed is still locked.

The checkpoint was not manned and traffic was flowing.

14:20 – The road leading to TulKarem was still filled with deep cracks after the turnoff to Hermesh.  A car drove through and bumped over the cracks, but we did not manage to photograph the car passing over the cracks.

People are already coming back from work.  A shipping container under the shed is being used as a kiosk and the other is in the process of being built.  The other container was being used for prayers.  People also told us about H. (See report from 19.12.2017) and they had different versions of the story.   Eventually we heard that he was tried for stabbing someone and was now in prison in Jenin.   People reported that after a sulha would take place between the two families involved he would be sentenced to four months in prison.  It is a sad business.  We wondered what had happened in H.'s life to cause him to do such a deed.

14:45 – On our way to the vehicle checkpoint a female security guard stopped us to check our car and we waited.  On our way out we gave a ride to two women who were also going to the A'anin Checkpoint.

Five tractors, about 20 men, and four women – includeing the women we had brought – were waiting to cross.  One of the tractors was loaded with olive branches with the leaves still clinging to them.   Other tractors had ploughs attached to them.   After about seven minutes two policemen and two police women arrived and slowly opened the gates

to the checkpoint and turned on the laptop computer.  After another ten minutes the first person was called to cross.  People entered in groups of three while a policeman checked their documents and a policewoman guarded him.   Another policeman and woman stood near the people who were crossing with drawn weapons – the epitome of feminism and equality.

15:25 – One of the policemen came to lock the gate.  I told him that there were another five minutes remaining until the checkpoint was due to close.  He looked at his phone and said that I was right, and asked where we were from.   A short discussion began.  His viewpoint was quite different than ours, but he listened politely and spoke to us quietly.

15:30 – The military police locked the gates and left for Tibeh – Romana Checkpoint.  We drove home.