All tracks connecting the Palestinian Jordan Valley with the West Bank localities of Aqraba, Beit Furiq and Toubas are now blocked with earthen dikes, ditches, huge boulders and locked gates

. Even those opened in the past few years have now been blocked again.

Only Gokhia Gate which separates the Jordan Valley from Nablus and Toubas is open today (since Sunday, according to local inhabitants). All of a sudden there are no “security grounds”, no “danger to Palestinians because the area is used for maneuvers” – of all times, when the maneuvers are on, the gate is open (to enable war machines free passage without delay every time it has to be opened and closed). Near the gate, 3 APCs and bored soldiers are seen. A military exercise is taking place again in the Palestinian Jordan Valley. We entered Ras Al Ahmar, but couldn’t get through beyond the first encampment because of the thick mud. It was raining heavily this morning and the entire region turned into one big swamp.

3 youngsters of the Bsharat family told us about the confiscated tractors that could not been reclaimed yet, and of the repeated maneuvers on account of which the inhabitants are evicted from their homes time and again for long hours, day and night.

Today the expulsion is not here, at Ras Al Ahmar, but in the north, near the Separation Fence between the Palestinian Jordan Valley and Israel. Villagers of Ibzik were evicted for today and tomorrow from 8a.m. until 4 p.m. Later many Palestinians would tell us of the hardship that inhabitants suffer having to leave their home in this winter cold with no place to spend this time – babies, children, the elderly, and the ill.

From 12 noon until 4:30 p.m. the road ascending to Tyassir and the West Bank was blocked because of the army’s maneuvers. Long lines of Palestinian vehicles were seen from Al Malih, where 2 bored soldiers were stopping traffic. The soldiers had no idea when the road would be open again. The Palestinians, mostly men, day workers on their way home from their work in the settlements – were loafing around on the road, smoking. Some asked us to ask the soldiers to let them get home – here, there, 200 meters way, in Al Bourj. But the soldiers claimed they had orders not to let anyone through, no exceptions. We were also in phone contact with Mahdi who was on the other (western) side of the blockage, and he spoke of long waiting lines there as well. Worst of all – school and kindergarten children (like Rina, for example, daughter of Yusef of Makhoul, all of 5-years old) had to wait on the road for 4.5 hours! They roamed around among the APCs, pleading the soldiers for some food, they hadn’t had anything to eat since morning.

This is the routine of life of Palestinians under occupation. Here maneuvers, there a “security situation warning” – no matter what the pretext, putting a halt to the inhabitants’ life is always handy.

The way to Abu Saker was closed on account of the mud. The gravel track he had prepared in the summer was destroyed and blocked by the occupation army. 5 families now live beyond the swamp, separated from civilization (unless a tractor is mobilized for emergencies or to bring the children from the main thoroughfare, which naturally serves the settlement). Still, every single attempt by the inhabitants to redo this gravel track in order to maintain some minimal form of human life is instantly blocked with violence by the occupation army.

Expulsion takes place in so many varied ways for after all, we are not like the gentiles. We do not publicly disclose our real face. No way. We are more moral, we don’t expel, we just teach our own school children Rehav’am Ze’evi’s transfer doctrine heritage, we only confiscate the Palestinians’ sole means for transporting water and other necessities, we only demolish their miserable dwellings (with demolition orders in the name of what “law”?), we only hold army maneuvers in crowded populated areas, endangering their lives with shots fired over their heads or leaving live ammunition in grazing areas. It all boils down to one word - transfer! Perhaps two - ethnic cleansing! The idea is to empty as much and as soon as possible the entire Palestinian Jordan Valley of its Palestinian population. The 20 Jewish settler families of Amona are being offered the world in return for their moving out. And here are people who have lived in the Jordan Valley for many generations. Some of them have already been expelled from elsewhere (including the now Israeli area of pre-1948) and all they want is to live their life, survive.

Protection from the ‘lord of the land’ and his Cossacks

Mohammad Al Kabir (“the older brother”) lives with his family opposite Maskiyot settlement. The settlers above, he below, as usual. (This is the family of little Bisan, the paralyzed child, for whom Shula and Hanna have been active for years to provide medical care).

The flock is herded by Mohammad’s sons, Ali and Ahmad, on the hills south of the settlement, at quite a distance away, after past confrontations with the Maskiyot settlers. Now the settlers have decided to let their cattle graze there of all paces, while in fact no one would prevent them from grazing anywhere they like. Since then, harassment by the Maskiyot settlers and with the constant aid of “our dear sons, the soldiers” has been constant:

Ahmad and Ali intend to continue grazing there for that is where they always have, and they have no other grazing area, as all of the ground across the road is a firing zone. Taayush volunteers intend to begin accompanying them to pasture and even staying with them nights, since the settlers come at nighttime to threaten the inhabitants who get in their way. 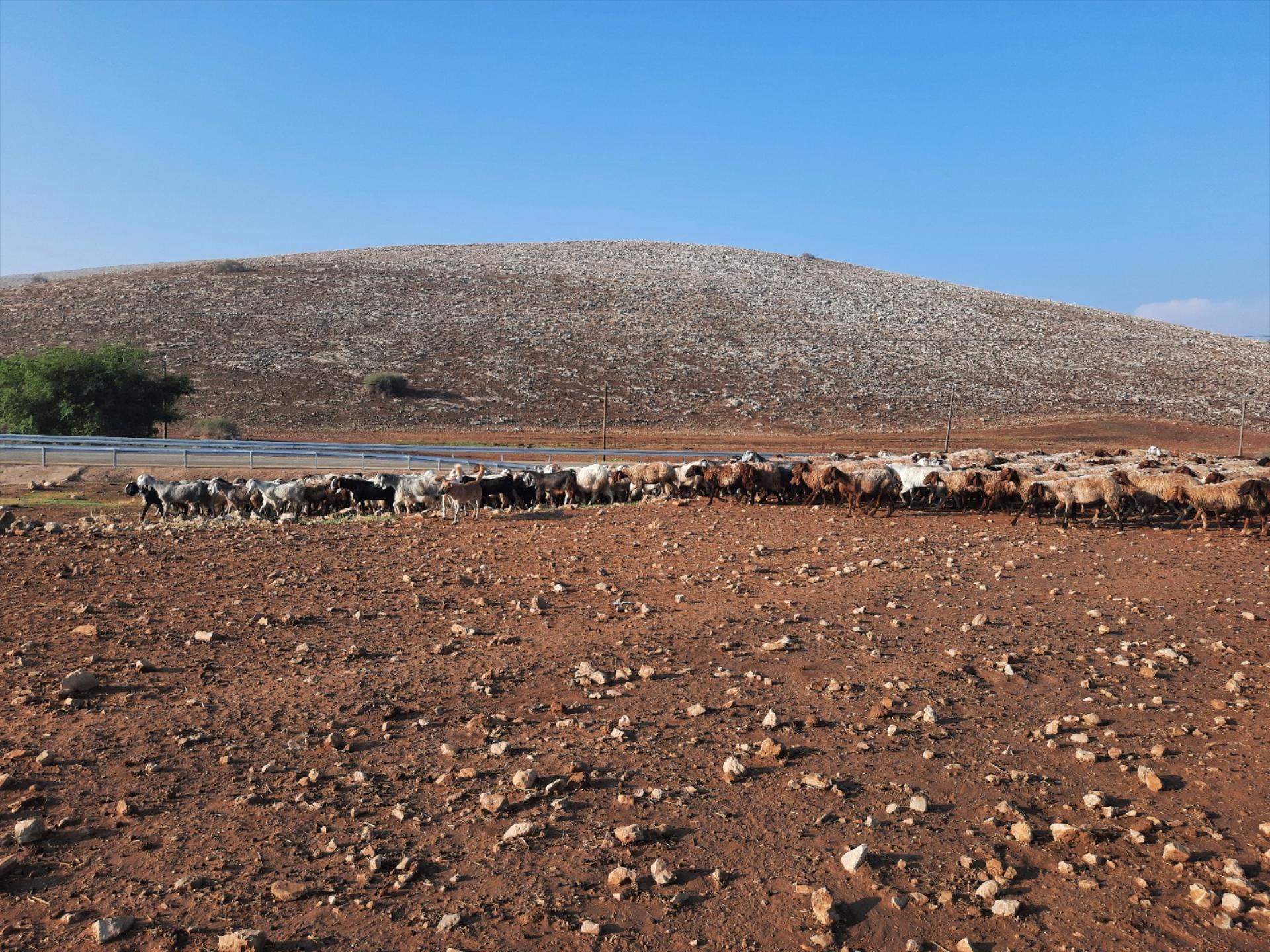