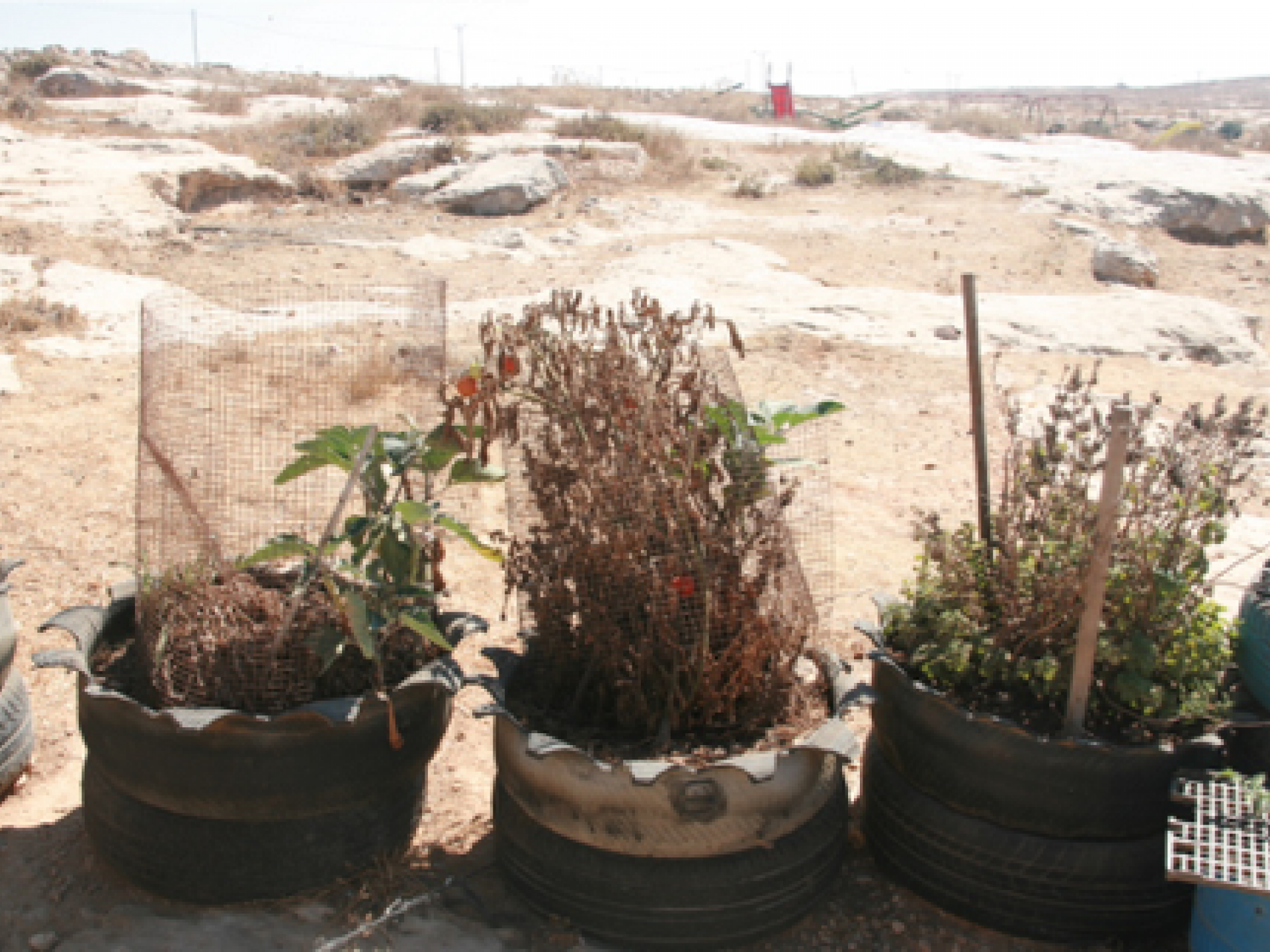 Every thing is wilting

We decided to visit Azzam in Susiya.  Since 1986 Azzam and his family have been living in a tent together with the other families who were deported from where they lived, which was defined as an archaeological site. Despite living in a tent, the tent environment is always well maintained. He turns garbage into pots of gold in old tires, which he cuts in various shapes. Concrete is poured between the rocks so that in winter water will not enter the tent and the concrete is filled with colored marbles.

When we arrived this time everything looked different. I asked him what happened and he sadly replied that this year's water consumption started a month earlier. He has several wells that, according to him, the settlers have clogged and sometimes also with carcasses. The price of water also depends on whether the water comes in a tractor or truck and also depends on the filling point. Sometimes their price can reach up to NIS 43 per cubic meter. By comparison, the price of water for Israeli citizens ranges from NIS 7 to NIS 12 per cube of water. 25 meters from Azzam's tent, the water pipe goes to the settlement but not to Azzam.

We sat down with Azzam and his lovely wife and we enjoyed the wonderful air which, for the time being, they do not yet have to pay for and some way will be found to make him pay for that too. I asked him what happened to his beautiful flower pots and he replied that he was watering them with water left over after washing the dishes. Because this water is also used sparingly, everything is withered.

Azam had a herd of 300 sheep and today he has only 100 sheep left because he had to sell them for a living. It is so difficult because of the water prices to deal with  watering the flocks or watering the few crops he has grown around the tent. Azzam in his beautiful language said that he felt like a person connected to the CPR devices and once the devices were cut off the person would die. The almond tree has dried up.

The settlement nearby is emerald green.

"The Human Right to Water is Essential to Life in Human Dignity" [United Nations Economic, Social and Cultural Rights]

The water supply which is part of the harassment of the Palestinians, we are constantly witnessing, cutting off water pipes, plugging wells, filling of places which were once filled with rainwater and which are now filled with concrete, things we have witnessed and reported on, are probably a means of expelling the people from their land. Even in Susiya's case, Pliah Albec recognized the existence of the village and that the land was owned by the villagers. They own the lands on which they sit.