The giant Efrat settlement: overt intentions for massive expansion | Machsomwatch
Skip to main content
Back to reports search page

The giant Efrat settlement: overt intentions for massive expansion 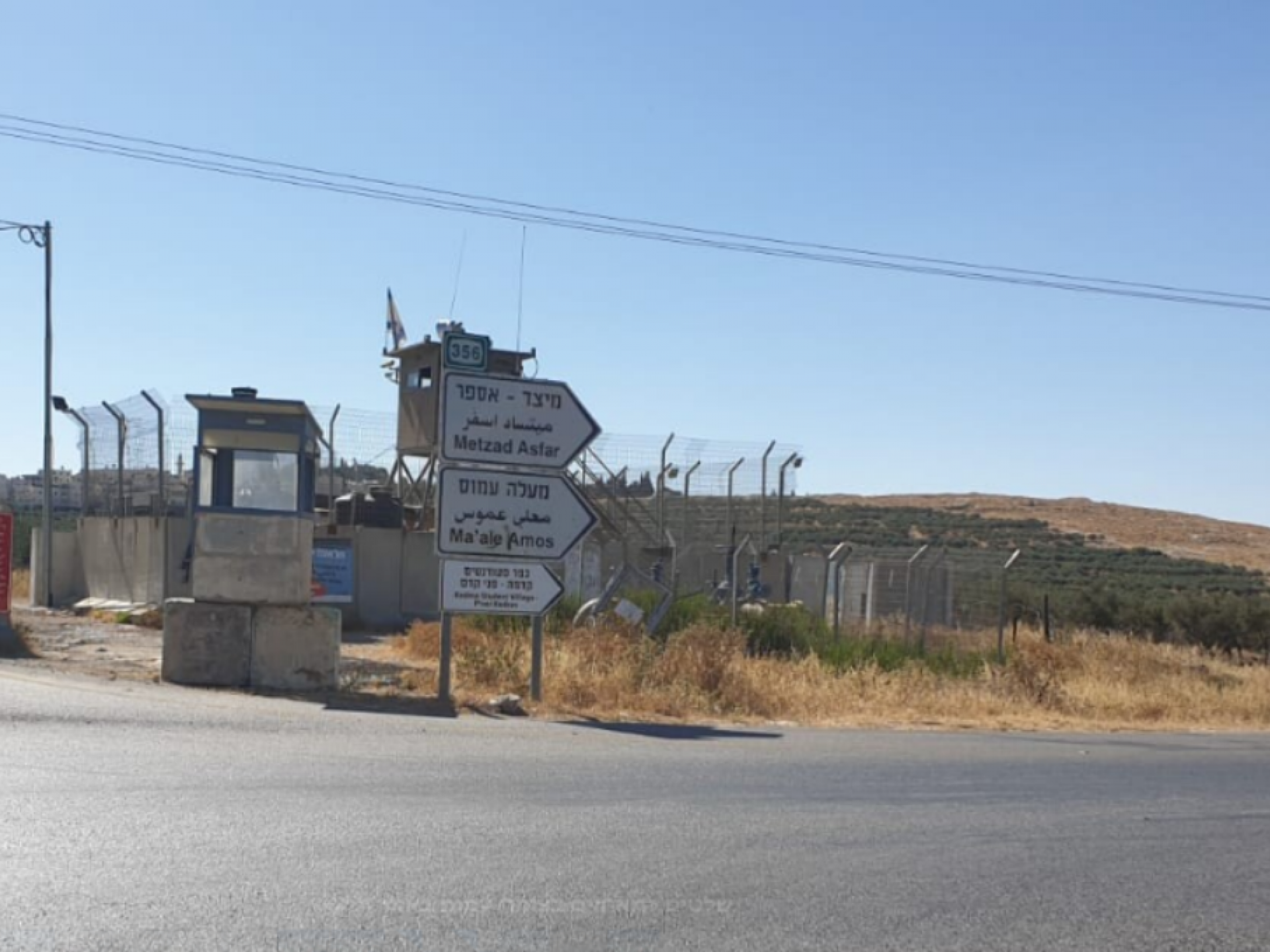 Signs for outposts at the crowded junction in the Herodium area 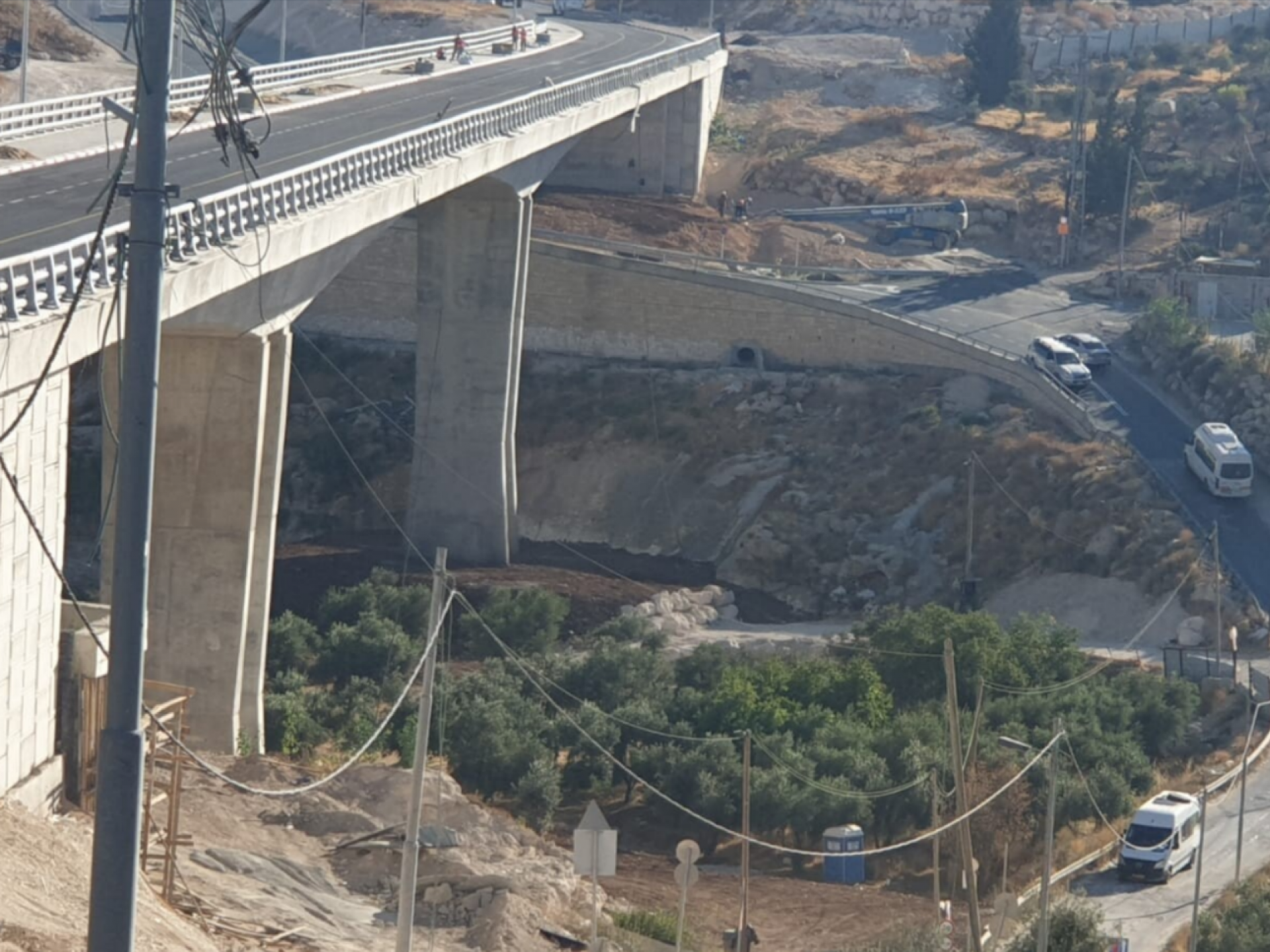 A new bridge on the South American Road, the shortcut to Jerusalem 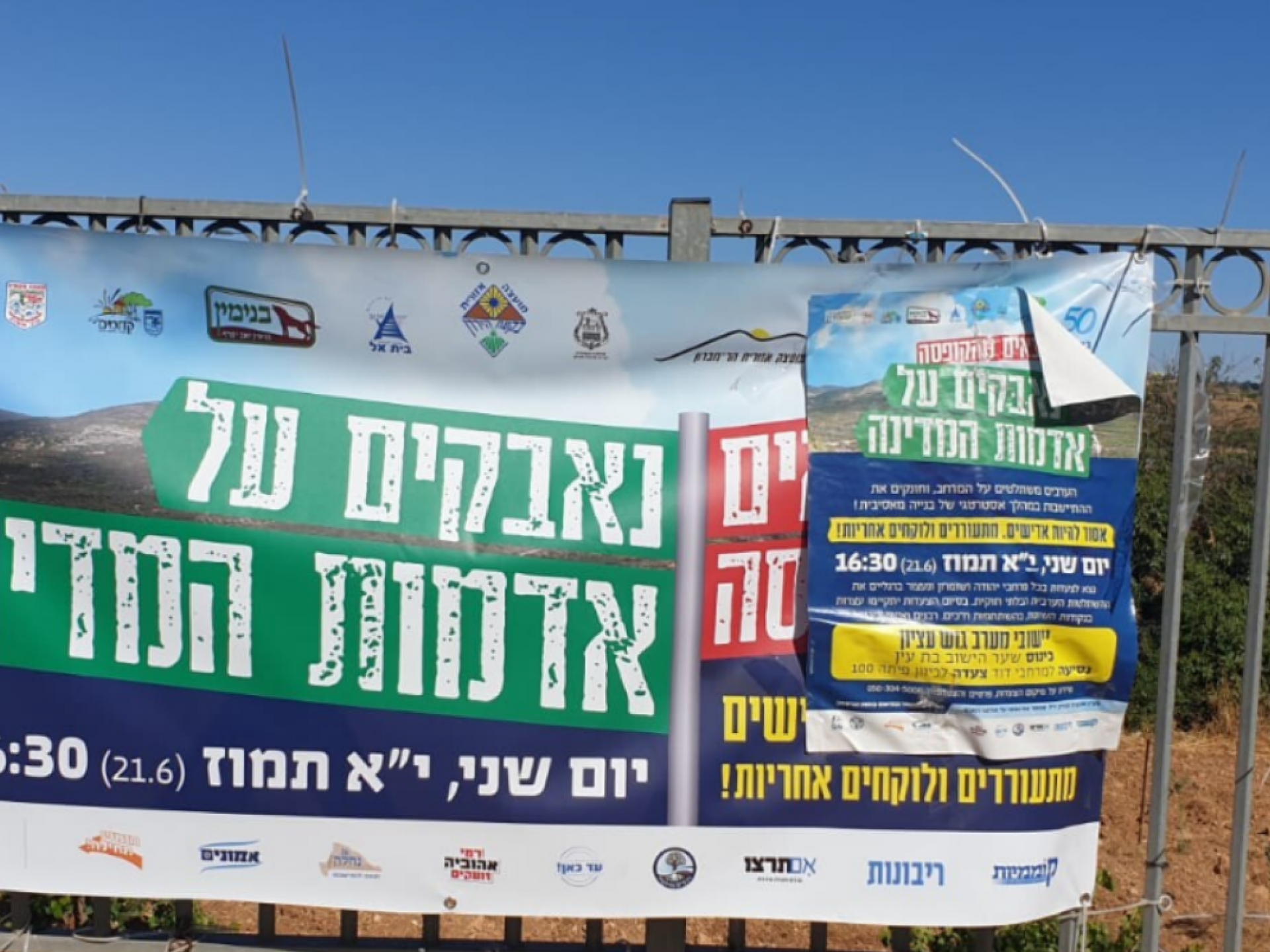 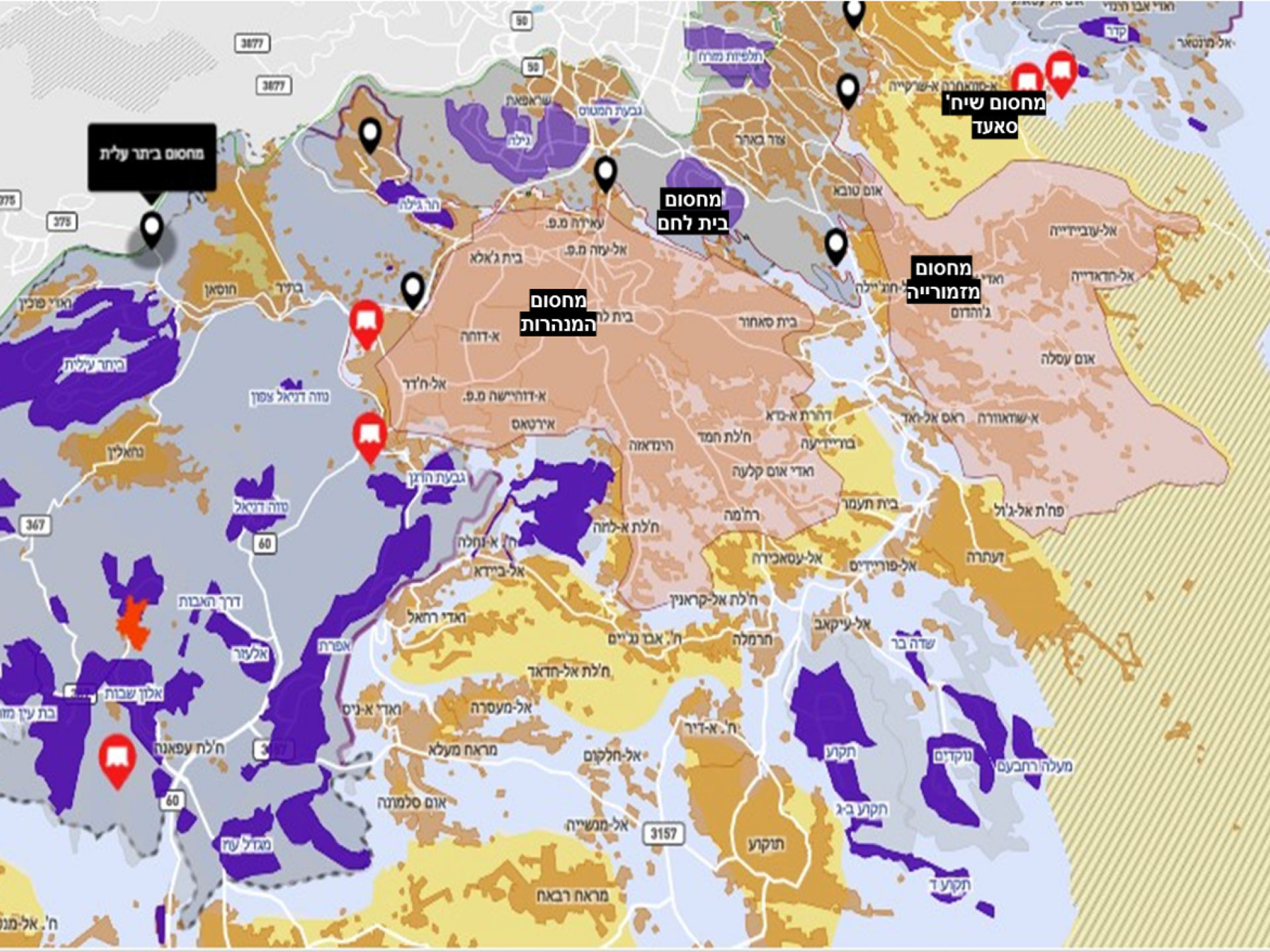 Sheikh Sa'ad, the tunnel checkpoint, Beitar checkpoint, Gush Etzion and Gush Tekoa and back to the Bethlehem checkpoint

At the Sheikh Sa'ad checkpoint, they went through Operation Guardians of the Wall  in Gaza without preventing passage or special delays at the checkpoint.

A crown of curly razor wire was added to the wall between Shiek Sa’ad and its mother neighborhood of Jabal Mukaber, adding a formidable look.

We were headed for the Beitar checkpoint, which we had not visited in a long time. We drove to it on the new southern American Road, and saw a new bridge that would shorten the road to Jerusalem from the Har Homa and Tekoa area. It is quite clear that the road is intended for settlers, because the Mizmoria checkpoint leading to it from the West Bank is intended only for Israeli car owners. We cut to the renewed tunnel road (60) (another tunnel and two tracks and a new type of wall with an elevation like an awning = monster) and from there through the al-Khader junction to the Beitar checkpoint.

What is interesting in this area (Route 357) is that the area lacks separation obstacles or an electronic fence between Palestinian localities such as Batir and Husan (Area A) and Upper Betar and northern Gush Etzion, to Begin Park adjacent to the Beitar checkpoint.  At the Beitar checkpoint stood 4 soldiers.  One observes and three check the vehicles passing in the direction of Israel. The conditions of passage have not changed: only Israeli cars and passengers with blue certificates or special permits. The soldiers said that of course there are many attempts to cross through the unfenced area.

Those who have not seen the settlement of Efrat, have never seen a huge settlement.  It stretches over several hills and, directing its hungry gaze to connect to the T’koa block from the west - including the settlement of Nokdim and south up - the settlement of Ma'ale Amos and its extentions. And who would have believed - we saw at the exit from one of the southern hills of Efrat a sign advertising a demonstration against the "strategic move of the Arabs for massive construction" and "the takeover of state lands."

We decided to test the feasibility of  Gush Etzion’s ardent wishes for expansions and travel from Efrat through Tekoa and Nokdim to Jerusalem. We saw that this intention also developed to the south, to Gush Ma'aleh Amos on the border of the Judean desert. We finally arrived via the Har Homa settlement at the Bethlehem checkpoint. We saw at the entrance to Gilo the workers who had already passed and were now waiting for someone who would like to hire them for daily work. If they do not find a job - they return to Bethlehem and Hebron.

At the checkpoint itself, the people exiting told us that there were difficult days, and today, Sunday, was particularly difficult. The checkpoint opened at 5 a.m., but there were not enough soldiers to check in, and some spent two hours at the checkpoint. The checkpoint’s commander of the police explained that everyone arrives together at 5 and then the soldiers do not cope with the load. She was very nice to us, but when she said "at the end everyone passes" it was clear to us that she sees the crossing at the checkpoint differently from the workers, trying to get to work as early as possible.  She simply does not grasp how difficult it is for them.

After the 1967 Six Day War, Jewish settlement in Gush Etzion was renewed, and since then another 14 settlements and 10 outposts have been established. According to the info-icon of the Civil Administration, Gush Etzion is now 7 times larger than its historic area, and the Jewish lands purchased before the evacuation in 1948 constitute less than 15% of the large settlement bloc of the Gush Etzion Council today, which Israel demands to annex in the permanent agreement with the Palestinians.

The Palestinian localities in the area are concentrated in enclaves, the largest of which is in the east - the Bethlehem area, which includes Beit Jala, al-Khader, Beit Sahur and more. To the west are settlements such as Husan, Nahalin, Al Jaba'a and Batir and small and ancient agricultural villages such as Shushahala, Khalat Sakaria and more. These are scattered on the last agricultural land left by the Palestinians in the area. In the 2000s, many illegal outposts sprang up, taking over private Palestinian land under the auspices of the administration and the army, trying in an extremely violent way to evict farmers from their land and homes and thus expand the settlements. Watch the video about the harsh reality in the Shushalah and Makam Nabi Daniel area.

During the 1990s, the new Road 60, most of which is forbidden to Palestinian traffic, was paved, and a separation wall was built next to it. Access to many of the Palestinian villages and agricultural lands in the area was blocked, and a buffer was created between the villages themselves as well as between them and the lands they owned. The layout of the settlements and the network of roads and checkpoints in the entire Etzion area indicate the intention to create a territorial and transportation continuum between Gush Etzion and Jerusalem.

Machsom Watch members have been active in the  for many years.  We talk to the Palestinians at intersections, DCOs, villages and Makamim (ancient Palestinian heritage sites) and try to publicize the looting, apartheid and violence they are experiencing. You can read about their activities in the attached reports.

in 2021, after many years of negotiations, the Civil Administration issued a new plan for the central village of Khirbet Bet Zakariya, including construction permits. The adjacent settlers protestated and asked the minister of defence to cancel the permits. Our members are in contact with the village and are trying to involve other organiztions  and use public opinion and  to stop this cancelation.
-