Settlers from the illegal settlement of Ein Zuka come down to Samra each night and harass Palestinian shepherds and their families. 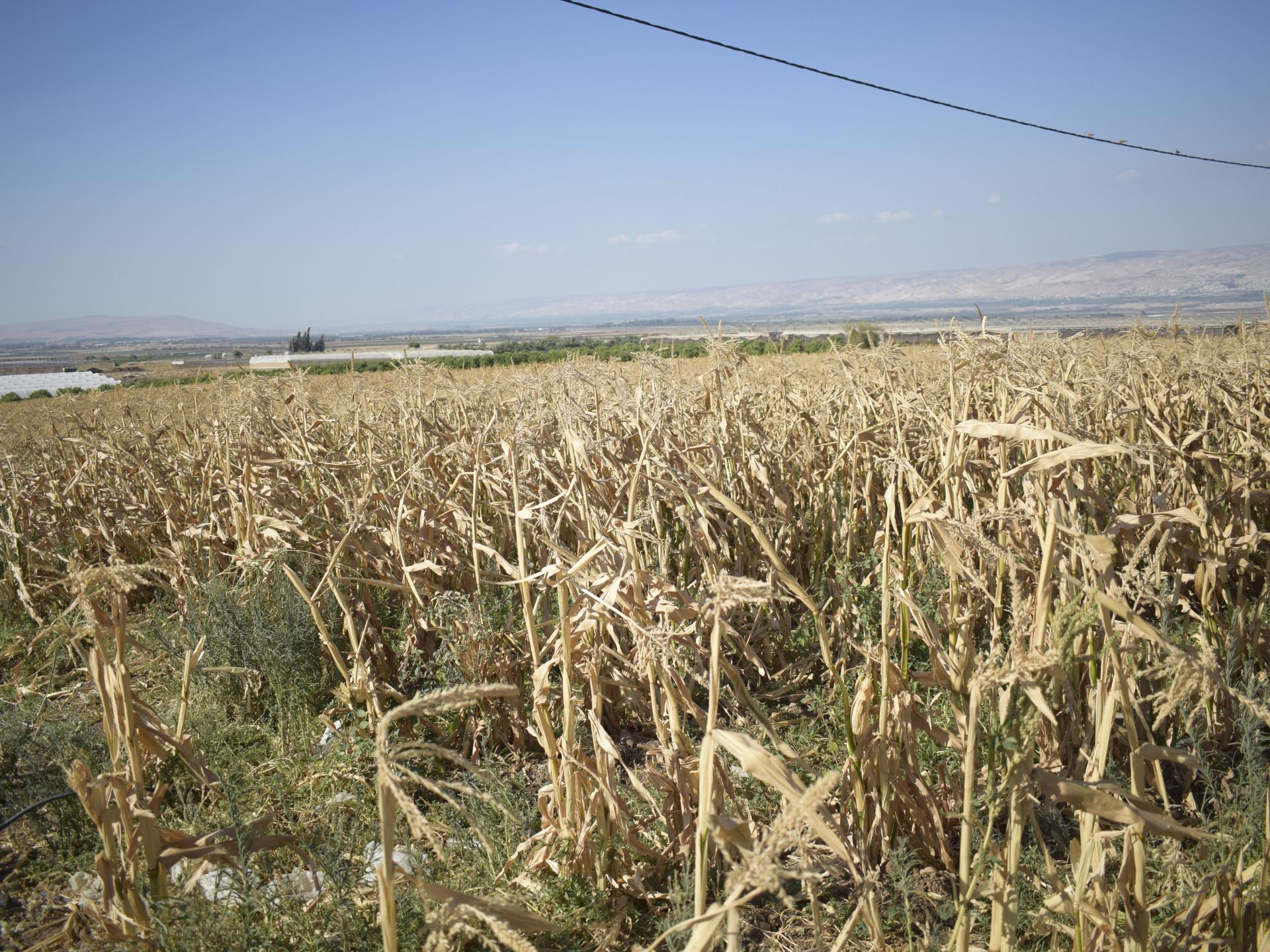 Bardala, Jordan Valley: A cornfield that has dried up because of lack of water
Photographer:
Nurit Poper 20.6.2017 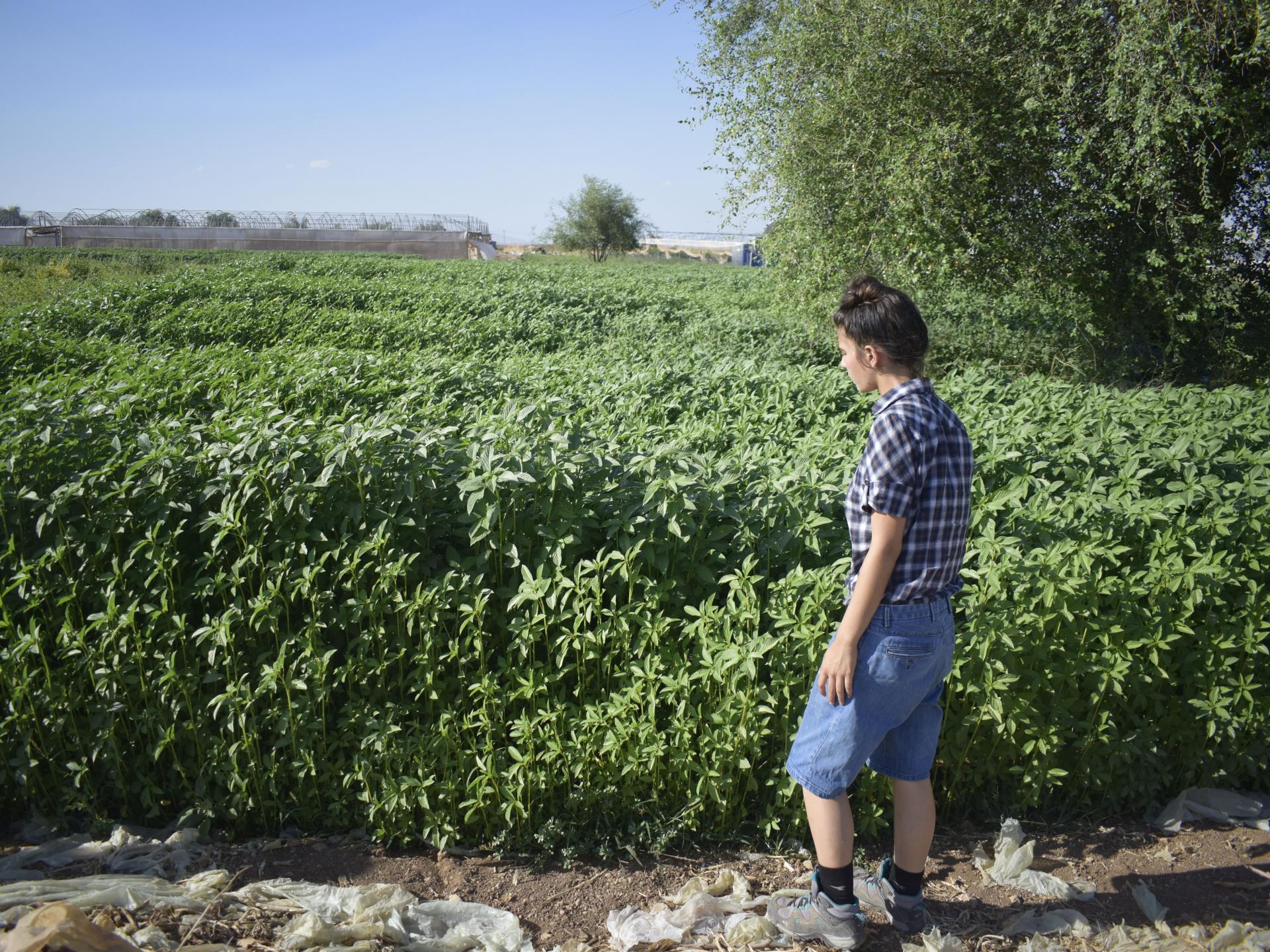 We came to visit two families whose homes have been demolished by IDF forces several times during the past year.   The camp belonging to our friend H. was empty.  Evidently they had taken advantage of the month of Ramadan to visit relatives.  The other family, a couple with four small children, two boys and two girls, were having an afternoon nap.  We were invited into their tent where an air cooling unit was working and it cooled off the area so that it was comfortable.  There are power lines close by and they are connected to the electrical system for free.  The Palestinian Authority is responsible for paying.  The situation regarding the water is extremely inconvenient.   They receive water every four days and fill the tank near their tent.  The amount of water is enough for the house, but they must buy more water for the sheep from the Fasayil well at the base of the mountain and bring it to the sheep.  They cannot bring the sheep to the well like their neighbors from Foka.  Their situation is worse than theirs, and they are not considered to be local residents – having arrived 15-200 years earlier after being evicted from where they were living previously.  They can only hope that their homes will not be demolished again and would have to wander looking for another place, where they will also be unwanted.

We came to Bardala to find someone who speaks Hebrew who could tell us about the water shortage there for a tour for journalists that is being planned for the coming week.  This is the third time that we have come to Bardala in the past two months after the irrigation pipes were cut and the crops were destroyed because there was no water.  Just two months ago there were green fields of corn with ripe lush green ears, and the fields are now dry and brown.  Months of hard work and resources have gone to waste.
Most of the streets in the village were deserted because of the heat and people were indoors resting because of the fast of Ramadan.  We went into a grocery store where people told us who to speak with.  Many told us about the water problem. There is enough water for people's houses but not for agriculture.   This year Mekorot (the water company) has decreased their water quota from more than 200 cubic meters per hour (as it was two years ago) to 100 cubes per hour.  In September people will begin to plant vegetables and if there is still no water they will have to delay the planting until the rains come.  We saw one green field of molokheya.  Not everything was dry.

We came to Samra to meet with M., and his family, who will also meet with the journalists.  He lives beneath the illegal settlement Ein Zuka and suffers scheming and harassment on the part of the settlers.  During the past few months he has been threatened and harassed while grazing his flocks and has now begun taking them near the camp rather than out to the far fields to graze.  He is still harassed by residents of the settlement, who are constantly looking for creative ways to harass the Palestinians.   Recently they have come near the tent almost every night at around 10:00, blow their car horns, make noise, and disturb and frighten people.  M. does not appear to be afraid, but we thought of his wife and small daughters.  Why must they live in constant fear of lawless settlers who come at night to harass people, and there is no law that prevents them from doing it?