MAIN POINTS: The settlers from Itamar harass the farmers of Beit Furik and Beit Dajan. Farmers from both villages have land on the ridge on which Itamar is situated. The farmers can barely attend to their land or harvest their olives. The two villages invested a million 200 thousand shekels in a system of pipes to bring water from a spring in the valley used by both villages. The project was worked on for 4 months, and would have been finished, but the National Nature Authority stopped the work and has prevented it from being finished. About 90% of the pupils who end high school go on to study at universities. But they can’t find work in their field of study anywhere in Palestine.

BEIT FURIK: We met with the head of the Council, H. While waiting for him to be free to meet us we looked closely at a very large picture of the Dome of the Rock with its surroundings, hanging on the wall. It was all done in embroidery! Millions of tiny stitches, in color, and not a stitch out of place. It’s beautiful. 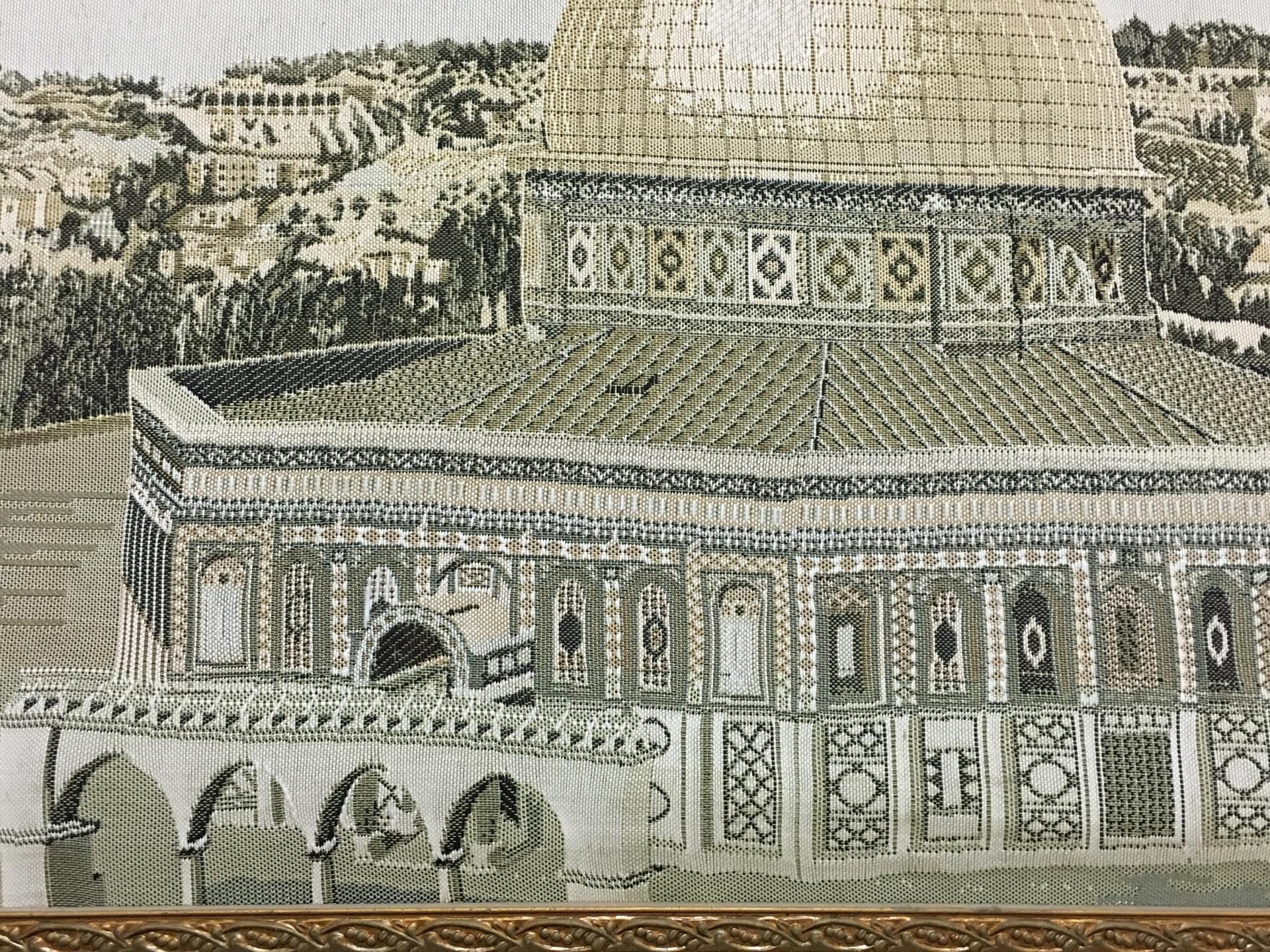 FARMING: Beit Furik is situated in a valley with hills surrounding it. At the other end of the valley is the smaller village, Beit Dajan. On the southern ridge of hills is the settlement, Itamar. The land in the valley and on the ridge of hills belongs to families in Beit Furik, but the farmers cannot get to their land on the hills. The settlers have killed two farmers, so others don’t dare go to their plots. One farmer was an old man who was checking his trees. Some settlers threw rocks at his head, even after he fell, until he was dead.

The farmers can only get to 60% of the land belonging to Beit Furik. A full 40% of their land is out of bounds for them. This causes much hardship for the families.

The Civil Administration now gives the farmers 2-3 days/year to tend the trees, and another 2-3 days to pick the olives. It is just not enough time to really do the work. In the last olive picking they were helped by Israelis organized through Yesh Din. Yesh Din also helped them with legal problems that they had with the settlers. We gave them the phone number of Yaakov Manor to get more help at harvest time.

Settlers have grabbed not only 40% of their land, but also valuable water springs. On land belonging to Beit Furik, near the village Beit Dajan, there are springs of water. The two villages have always shared this spring water for the flocks of their shepherds. But now the Itamar settlers have taken possession of the springs, and do not allow the shepherds to use the water.

The Israeli Army: Soldiers come to the village sporadically – sometimes to cause a provocation, and sometimes to take someone for questioning. There is an army base, not far from Beit Furik, by the main road that leads to the settlement Alon Moreh. The Palestinians are forbidden to use this main road and have to go around by a side road. The Palestinians in Beit Dajan have to go through Beit Furik in order to get in and out of their village. There is an army watchtower on the side road that is manned day and night. The army may set up a checkpoint on the side road and demand to check anyone going in or out. Sometimes they demand that a truck driver unload his truck and they check the contents. There are no set times for this to happen.

The photo shows a tower with several cameras at the strategic entrance to Beit Furik. Technology ensures Big Brother doesn’t miss any of the sights and sounds of the villagers’ daily comings and goings. 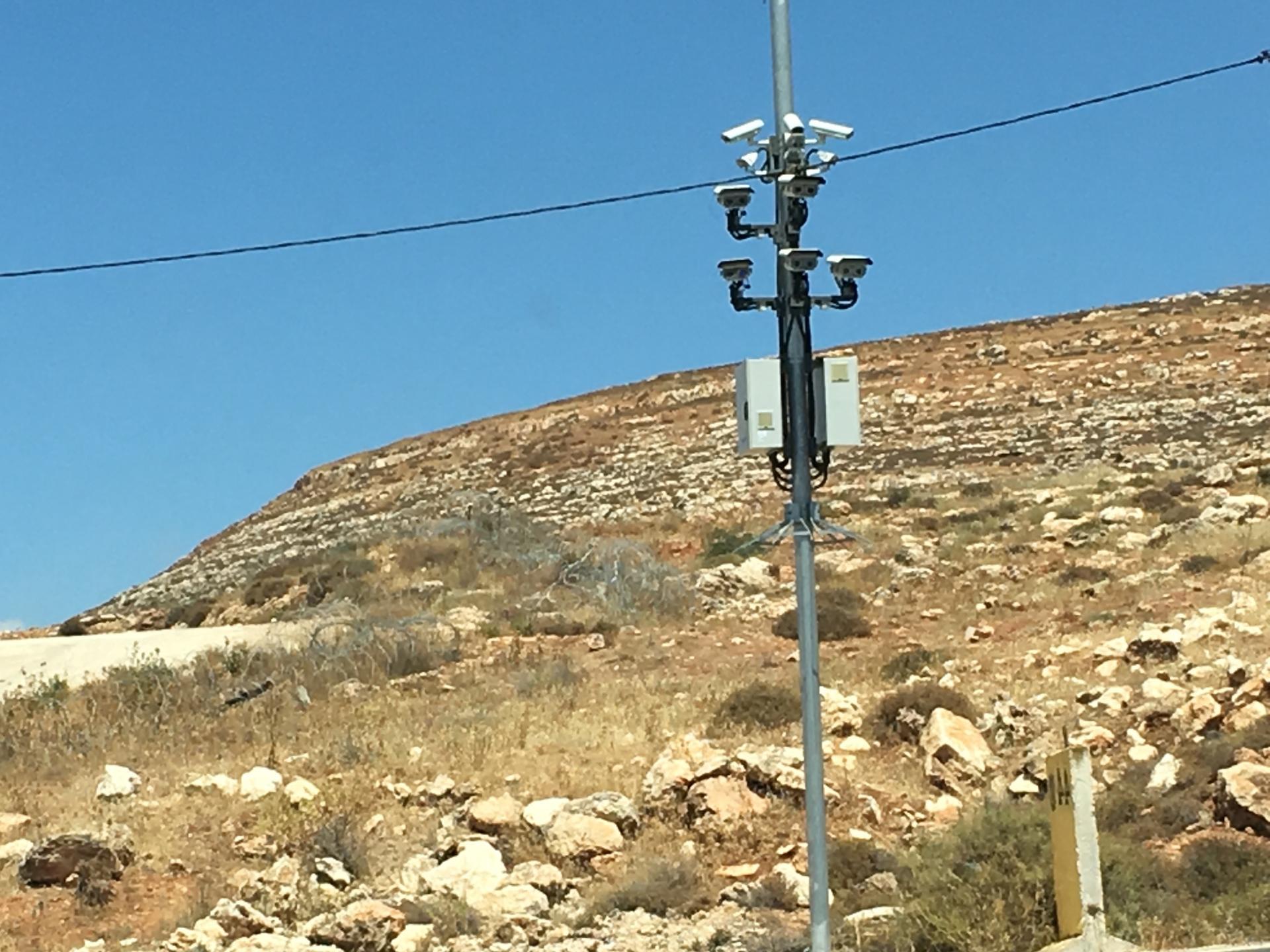 ELECTRICITY: Unlike in Yatma, where their insufficient infrastructure dos not allow them to use A/C in private homes (see our Report 2.05.18), here there is no serious problem with electricity: they pay for it, Israel provides it.

WATER: This is the most pressing problem, especially now summer is here. The combined population of Beit Furik and Beit Dajan is 19,000. Incredibly, Mekorot allots the two villages together the miserly amount of 24 cm of water/hour.

Some months ago, they tried to solve this vital problem. During the Ottoman reign, the two villages had bought the land of Vaadi Bidan, the valley in which they are located. The Nasaruyah spring, near the settlement of Hamra, is on land they own. So last winter, they invested a million 200 thousand shekels to put in a system of pipes to bring the water to the villages. This project was started eight months ago. The work went on for four months and 71/2 kilometers of pipes were installed. At that point, the National Nature Authority (Reshut Hateva) stopped the work and has prevented it from being completed. Beit Furik had planned to receive 500 cubes of water/day. They have no idea when or how they can complete the project. Nor can 19,000 people manage with Mekorot’s inhuman 24 cm of water/hour allotment.

EMPLOYMENT: Every year there are about 4000 pupils in the Beit Furik school system. 190 pupils, about 90% of those who finish 12th grade, go on to study at universities. But the graduates cannot find much work in the Palestinian territories. Some find a job with the Palestinian Authority, but very few. About 80% of the Palestinian workers who get permits to work in Israel, and are doing manual labor, are university graduates. However, getting permits to work in Israel is not easy. If any person in a family is suspected of any action against Israel or Israelis, then the entire family is punished by not being allowed to get a permit, or having existing permits revoked.

The young people feel they are being strangled. A visa to go to another country to find work is very expensive. Those who do manage to go abroad and work send money back home. We saw several very lovely villas as we drove through the village. These, we were told, were built with money sent from abroad. It is not unusual for someone to build a home in the village, and then send his wife and children to live and be educated in Palestine, while the father continues to support the family from abroad. They do not want their children to lose their native culture, language, and family ties.