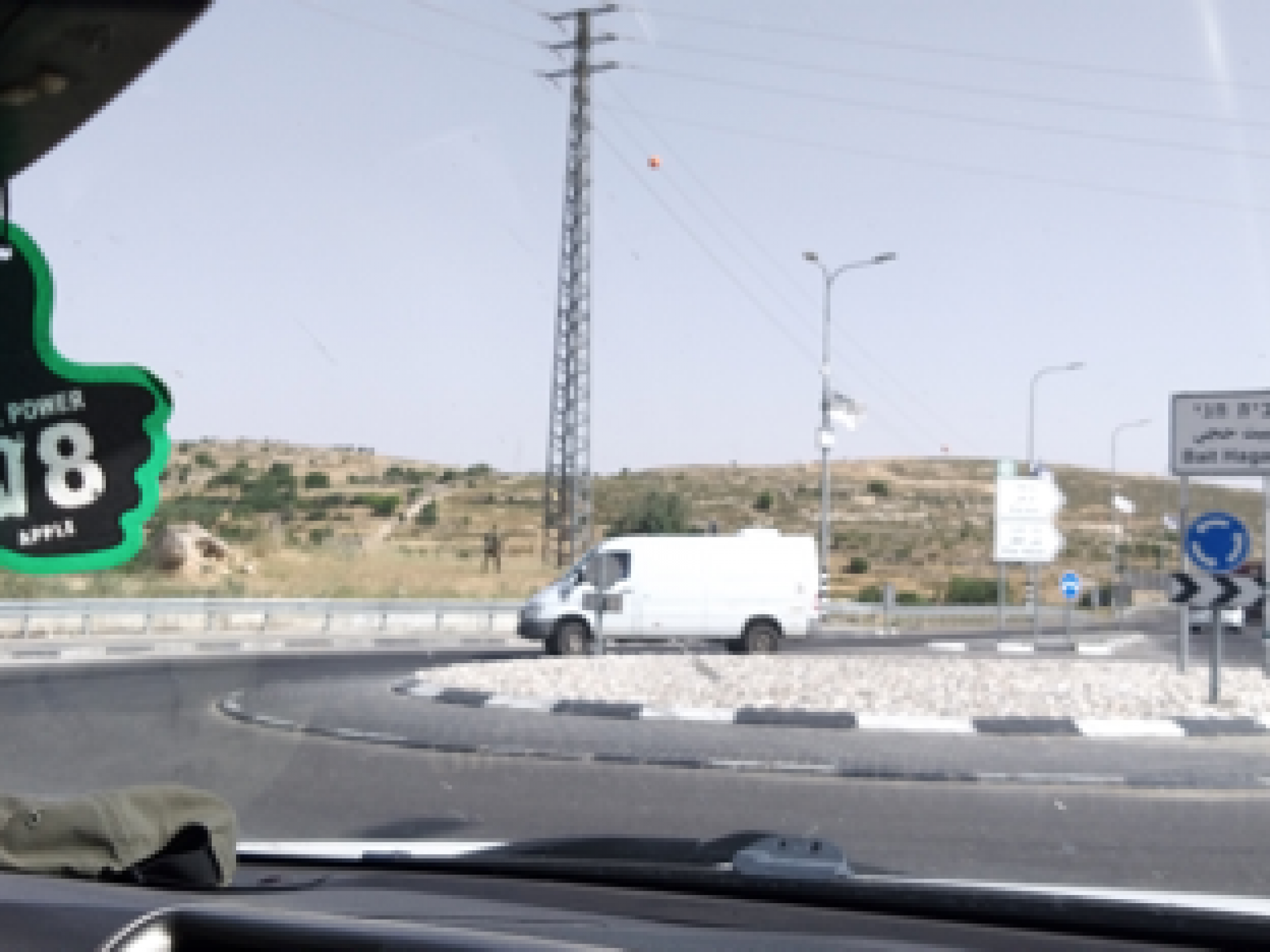 On the left soldiers at the concrete block with a flag

We arrived  late. At the parking lot of the Meitar checkpoint on the Palestinian side at 15.00, to my surprise, there were quite a few cars and some people returning through the turnstile to the Palestinian territory

We alighted Highway 60 Hebron. After not being in the area for a long time, the fields are yellowing and are now waiting for the harvest which I hope will take place. On the road there is very little traffic and the entrances to Dahariya and Abda are open. There was a checkpoint at the northern entrance to Abda near the pillbox. The entrance to Deir Razih is also open.

Dura - El Fawwar Junction is open but four soldiers with weapons in stand at concrete blocks in the square.

At the entrance to Hebron in front of Beit Hagai there is a lot of army. Red signs warn you not  to enter Area A and soldiers stop all cars exiting Highway 60. A very long column of cars is exiting Hebron as seen in the photo the way to Hebron, we discovered a new "kit" of the occupation: the concrete block, the Israeli flag and two soldiers.

Since we were traveling it was difficult to take a good position but you can see on the left side of the picture the concrete and flag and the soldiers next to the electric pole. We also saw this "kit" near Kalkilis and in the Road 60 square and 356.

Another checkpoint was at the Sheep Junction and here too every car exiting Highway 60 was examined.

In Hebron everything is normal. Only the Jews are allowed to travel and the Palestinians, they march in the terrible heat of the day.

Rachel House is completely covered with black plastic sheeting and we hear  the sound of the hammer banging.

The pharmacy barrier, in the laundered tongue of the occupation, becomes  "Welcome to the Pharmacy Pass." I imagine how happy the Palestinians are at the checkpoint.

On the way back, the checkpoint in front of Beit Hagai disappeared and Palestinian cars exited without difficulty on Route 60. What happened in the half hour since we passed there before it became clear that the checkpoint was no longer needed.

Now add to the "Kit" of the flag, the concrete barrier and the two soldiers also a tent.

Back at the Meitar checkpoint there was a very long queue of cars.