Soldiers are posted at all the bus stops used by settlers.

The checkpoint at the entrance to Huwwara is manned by soldiers in both directions.  Rigorous inspections are apparently conducted at the entrance to and exit from Nablus, because a traffic jam of about 20 vehicles at the entrance to Nablus is visible from a distance.  We planned to look more closely when we returned from Beit Furiq, but when we passed again we saw vehicles entering and exiting the city without inspections.

We showed up at the municipality without an appointment but the head of the municipality welcomed us.  (Although he annoyed me.  When he realized I’m an Arab he asked why my head wasn’t covered, pointing at a employee nearby and saying “Like her!”  I replied I don’t believe a woman should conceal her hair – to the contrary.)

He told us that on Thursday, December 13, settlers arrived in the wake of the incidents in Efrat to pray and demonstrate at the Beit Furik checkpoint, early in the morning and during the day.

Residents of Beit Furik weren’t able to reach Nablus that day.  Workers who aren’t permitted to travel on the apartheid road (formerly known as the Madison route) linking Huwwara directly with the West Bank and intended only for the use of settlers from Alon Moreh and Itamar and other Israelis must go through the Beit Furik checkpoint to Nablus and exit to the West Bank through the Huwwara checkpoint.  They were turned away by the soldiers protecting the settlers demonstrating.  They were forced to return home and lost a day of work.

The head of the municipality said that the checkpoint’s closure

by soldiers isn’t anything new, but a regular occurrence.  Almost weekly, and sometimes twice a week, settlers arrive at night to pray at Joseph’s Tomb and the army closes the Beit Furik checkpoint, and then workers who can reach the West Bank only via that checkpoint and through Nablus lose a day of work because they aren’t able to arrive in time at the Eyal/Qalqilya checkpoint to reach their jobs in Israel.

11:30  We left.  We passed the checkpoint where a military jeep and soldiers stood but traffic passed between Beit Furik and Nablus in both directions without inspections.

11:45  We stopped at a bus stop.  We saw a prominent notice addressed to hitchhikers.  The text demonstrates the symbiosis between the settlers and the Civil Administration and emphasizes an additional aspect of the occupation and the need for the IDF to closely control conditions in order to protect the settlers.  The text speaks for itself!!!

Here are a few simple instructions that could save your life.

The notice provides the two phone numbers and was issued by a battalion of the Shomron regional brigade. 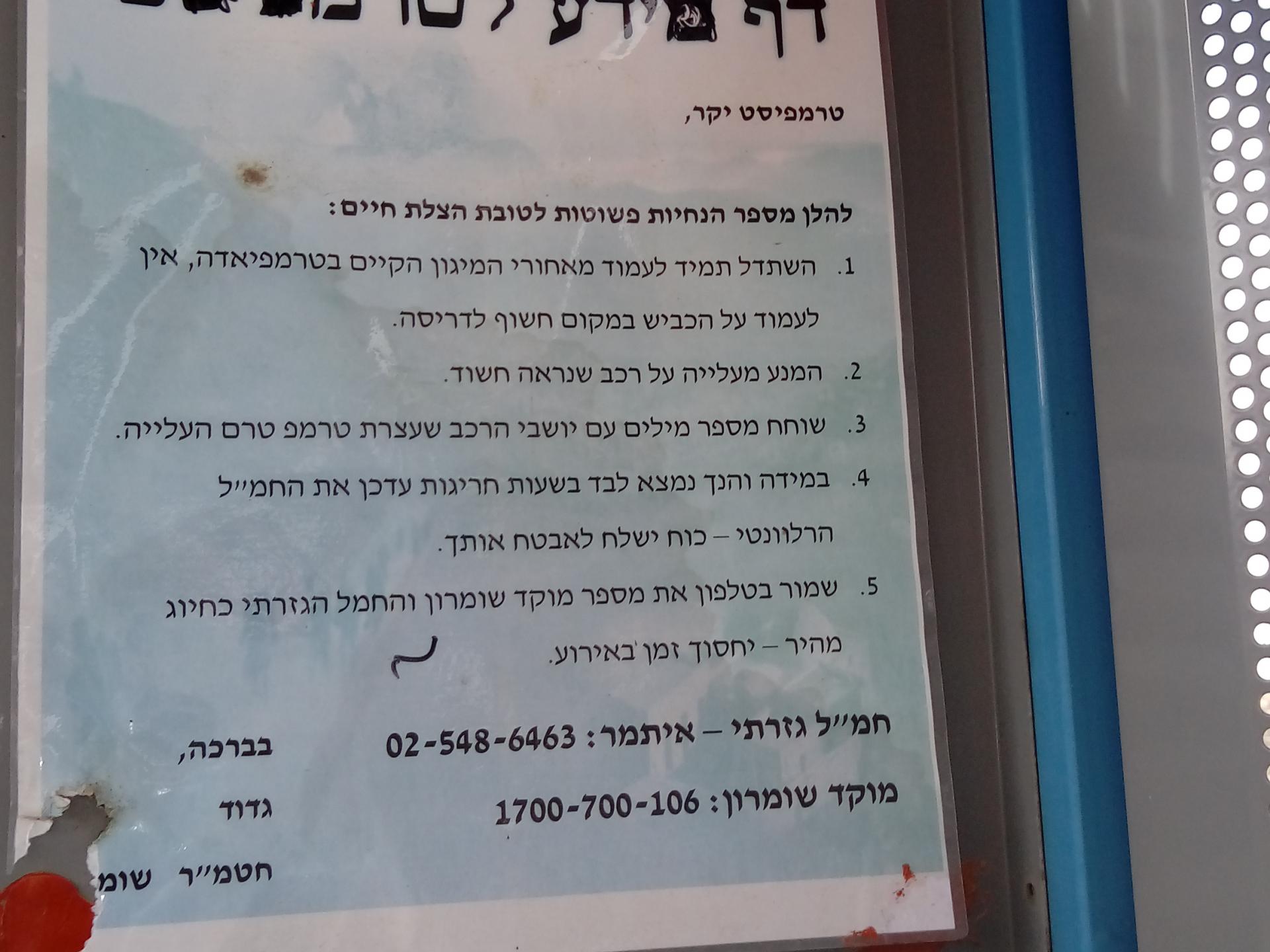 Information page for the hitchhiker at the bus station.
Photographer:
Fathiya

We drove to the municipality and met the head, Abu Ihab, who told us how they suffer daily from the settlers.  Settlers from Yizhar, backed by the army, descend to the village and prevent them from working their lands, move freely through the village and throw rocks.

That’s part of their daily routine.

He told us his own story – the army confiscated a tractor operated by his son in the village because he apparently worked too close to the Yizhar settlement.  They needed an attorney in order to reclaim it a month later and, of course, pay a fine and storage fees.  He also told us that in March the army entered their home, searched, emptied all the wardrobes and closets and arrested his son.  The Palestinian Authority provided an attorney who got the son released after six months in jail.

When we left Einabus I telephoned Munir, a B’Tselem investigator, who told me of a hate crime and damage to vehicles in Yasuf the previous night.

We decided to go there.  On the way we passed the Za’tara checkpoint.  It was manned by many soldiers but we didn’t see traffic being stopped or cars driving from Nablus to Ramallah or in the opposite direction.

Settlers descended to the village in the early morning hours, punctured tires, broke windshields and sprayed slogans on the wall of the mosque and the cars – “The People of Israel Live,” a star of David, etc.

Eighteen vehicles parked on the village’s main road were damaged.

By the time we arrived some of the vehicles had already been taken to the garage for repair.

South of Nablus, at junction of Routes 57/557, between settlements of Bracha and Itamar. One of three checkpoints that close off Nablus, together with Beit Furik and Beit Iba.

Click here to watch a video about Huwwara checkpoint.