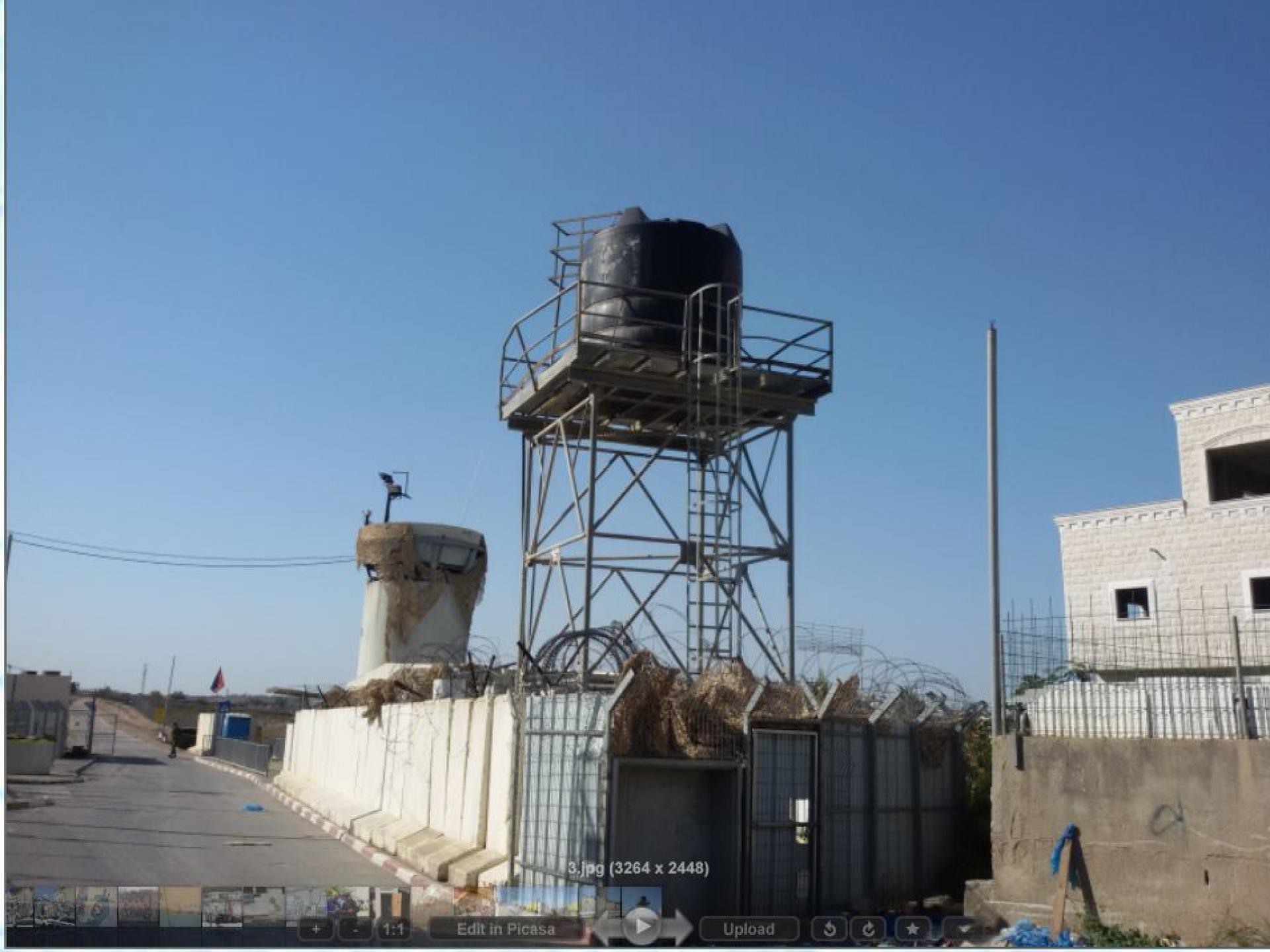 Baaka Checkpoint: The checkpoint facilities and pillbox opposite the windows of nearby houses
Photographer:
Tami Ritov 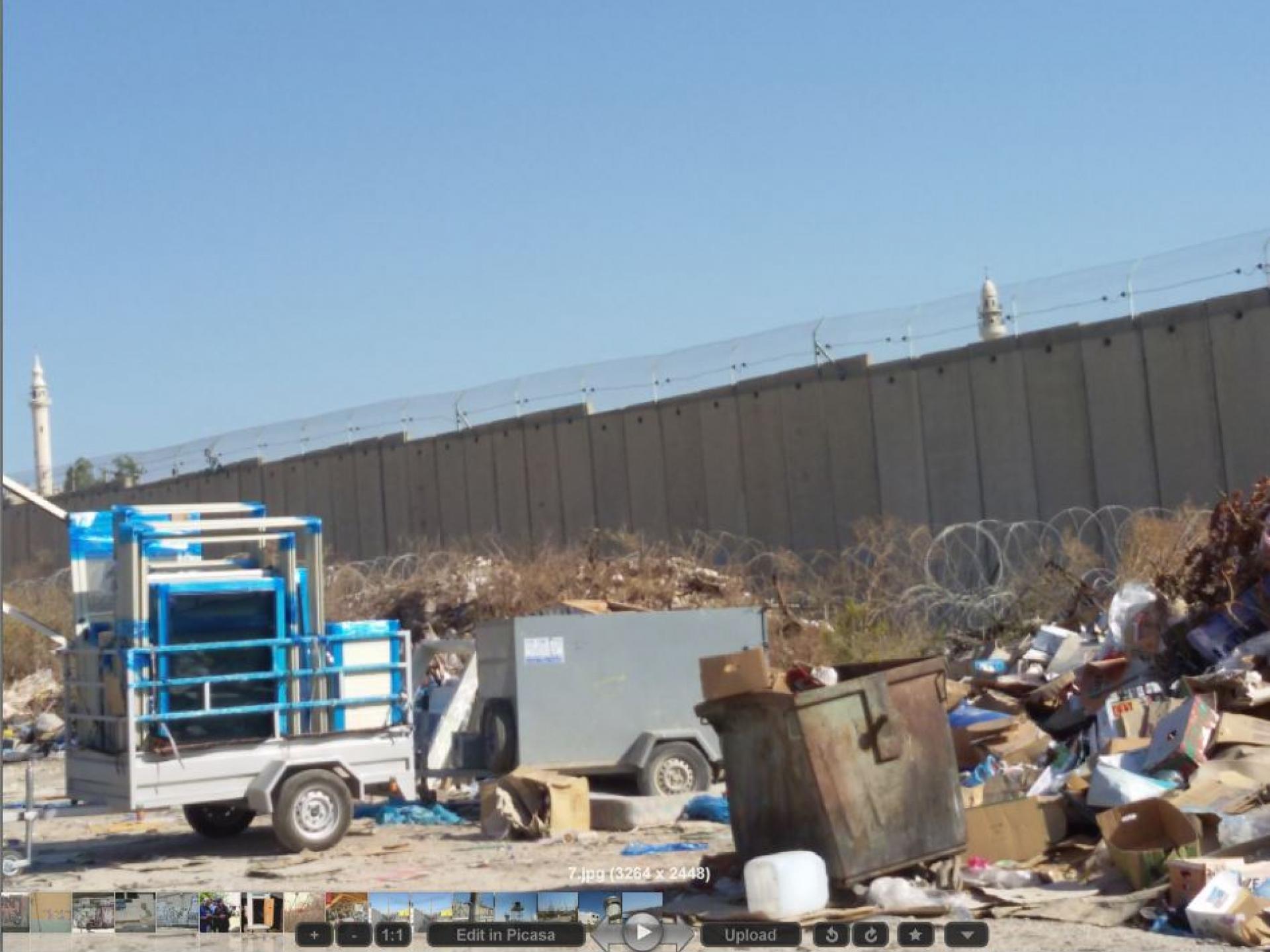 Baaka Checkpoint – Before the separation barrier was built there was a colorful market here
Photographer:
Tami Ritov 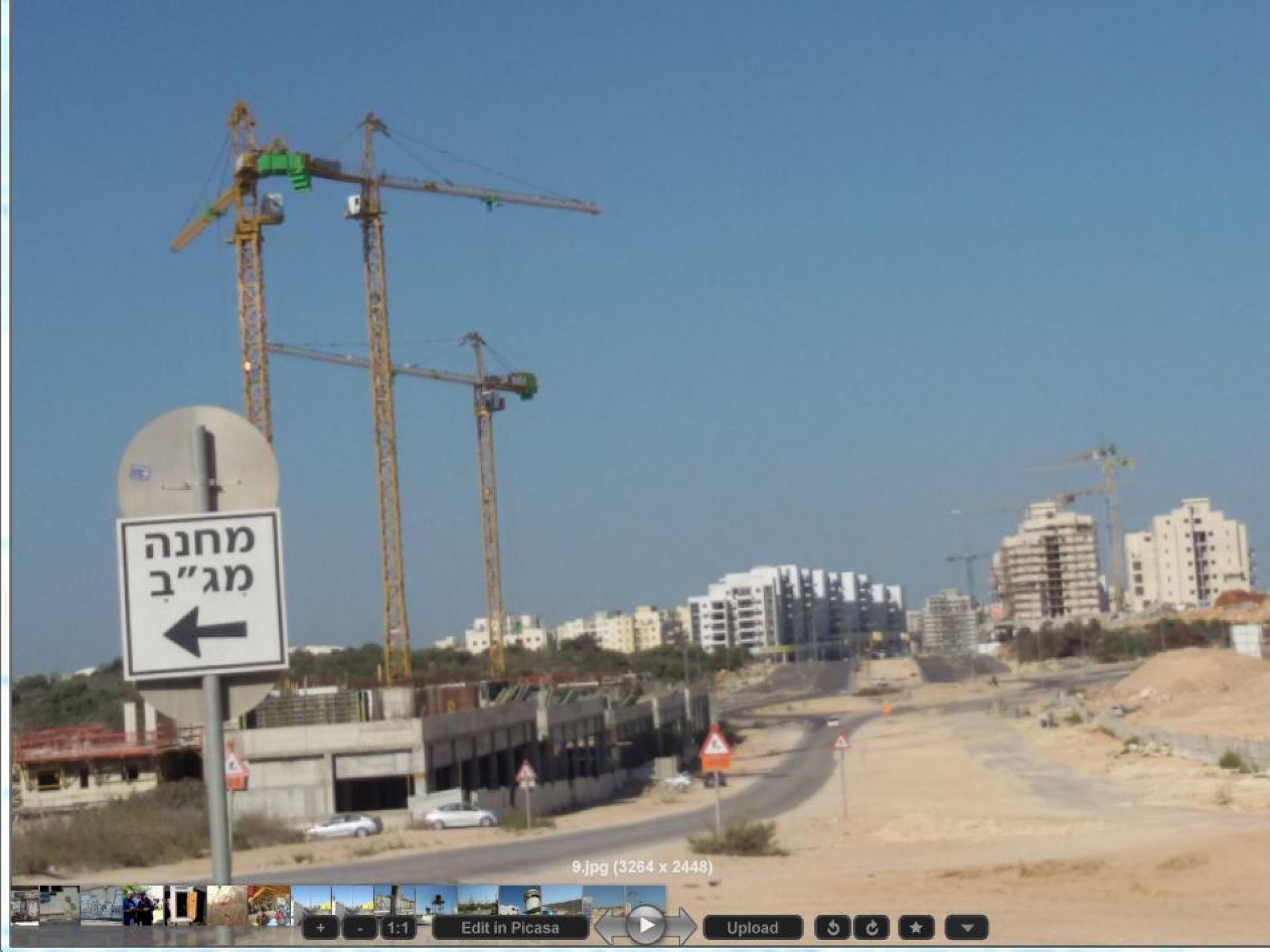 The city of Harish is being built by thousands of Palestinian workers from the West Bank.
Photographer:
Tami Ritov

We changed our plans today because we arrived late at the checkpoints due to a human error. The atmosphere at the checkpoints was different at this later hour.  It was strange to see the area nearly empty of people since we usually arrive at sunrise and the parking lot is crowded.  A few people crossed the checkpoint.  Many of them were women and older than the workers who cross in the early morning.  The men were dressed differently than the workers who come earlier and are mostly businessmen who work in Barta'a.   We spoke to the attendant who receives a fee of NIS 5 per vehicle for parking and two workers who were sitting in a banged-up car.  We asked where the parking fees go, but the answer was not clear.  The fees amount to about NIS 40,000 each month.   Half of this amount evidently goes to Israel and the other half to the regional council of one of the local villages.  We calculated that a Palestinian spends NIS 100 each month on parking fees at the checkpoint.   Even those who park at the distant areas are not exempt from parking fees.

One of the people sitting in the car asked us how to overcome the problem of being prevented from working in Israel.  He is a resident of the West Bank and explained that he did not know why he was forbidden to work in Israel and he has done nothing illegal.   All we could do was give him Sylvia's telephone numbers, and this gesture earned us a cup of coffee from the thermos of a man who was sitting in the shade.   A truck unloaded crates in the parking lot.  When we asked what was in the boxes we were told they contained "Ras el Abed" – Abed's head – a term for Crembo – the round chocolate covered marshmallow snacks that are popular in the winter.

There are almost no pedestrians crossing.  The kiosk is sparkling and clean after the morning traffic. A young man was leaning on the counter talking to a settler about an important issue of whether a Palestinian from the West bank can marry a resident of Katzir and live with here there.  The man's Hebrew was full of words in Arabic that cannot be written here – as if there were no conflict in the area.   At any rate, the woman from Katzir refuses to live in a Palestinian village, and this is the problem.

One window was operating in the terminal which was enough for the few people crossing the checkpoint.

There were a few yellow transport vehicles in the upper parking lot waiting to drive the last arrivals to work.

We drove down near Baka and around the new city of Harish that is being built.  We were amazed at the huge size of the new city.  The construction provides a lot of work for Palestinians.  The surrounding villages are being diminished in comparison to the local landscape.  At Baka we drove eastward until we reached the edge of Israel. The separation barrier halted us.  There was once a large market here but now there is only a large area of broken metal booths and building rubble. We could not ignore the contrast between the remains of the market and the new urban construction there:  The stone buildings of the village against the separation barrier, the heavy metal fence and watchtower covered in camouflage.

Only a few pedestrians crossed the checkpoint.  There was a deceiving pastoral calm around us.

The checkpoint is on the Green Line beween Baqa alGharbiya and Nazlat 'isa.