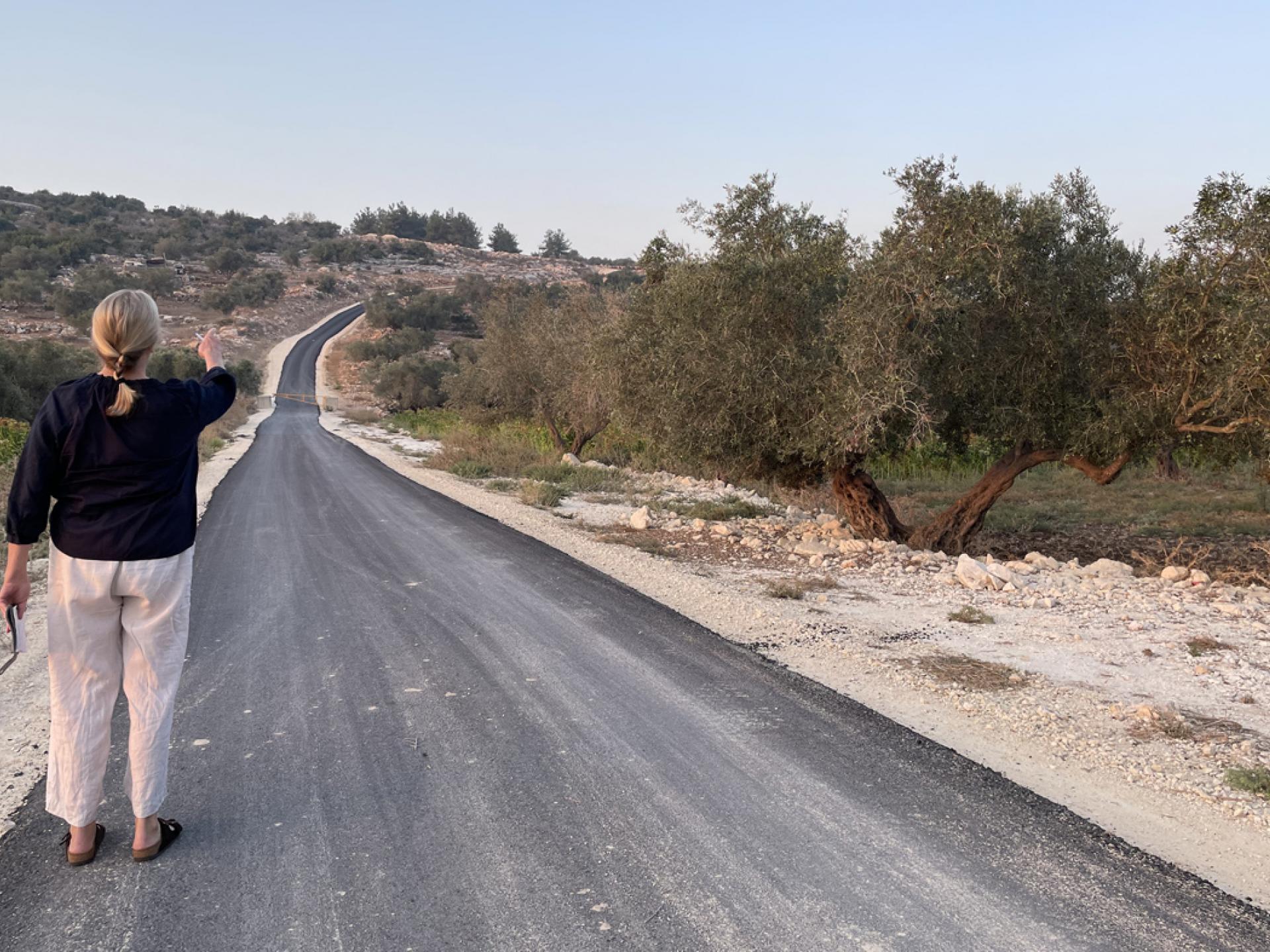 Jam-packed doesn’t even begin to describe it:  we barely crossed the section between the intersection and the checkpoint. Buses, vans and taxis maneuver at the entrance to the parking lot (seam area side). The passage to the West Bank is completely free, we are in Area C. Further down the road, on the opposite hills, spread the parking lots that yielded a good living for the owners of that land, perhaps they are Zabde residents. They are now blocked by canals and mounds. It seems that they are being prepared for more orderly parking. Cars are parked on both sides of the road up to a distance of almost a kilometer. We are told that the management of the Barta’a checkpoint occasionally hands out citations to those who park by the red and white curb, denying transit and work permits in Israel.

Traffic proceeds without delay. Looks like they cleaned up a bit around the garbage cart. We stayed in the car. A heftily armored military jeep pulled up next to us. "It's not good for you to be here." "We've been here for 15 years, that's fine," we answered. "What’s your deal?" "Machsom Watch". "Ah, give’m hell!" the young officer blithely suggested/commended. On our return to Emricha, we were surprised to find that the road that was broken out for the 17 families in the settlement of Maoz Zvi (Dotan B entrance), is covered by a brand new asphalt strip!! The yellow IDF gate, whose keys are in the hands of the settlers, was locked.

The checkpoint structures have long since become a kind of Tumarkian monument. We hop over there to see if there are any surprises in the field and on the way - we continue to be amazed by the landscapes’ changes from shift to shift.

Returning at the Barta’a checkpoint, we picked up a hitchhiker who had to park his car 600 meters from the checkpoint (we measured). We entered the crowded parking lot. We spoke with the workers who didn't feel like crowding in the transit shed/pen and stay on the side meanwhile, waiting for the commotion to die down. We try to elicit their take on what happens at night in Jenin and its surroundings. "Everything is fine", they reply with a frozen facial expression. We talked about livelihood and hardship. Their daily wage in Israel ranges from NIS 250 for a simple laborer to NIS 500 for a professional laborer.

Moderate traffic at the checkpoint. A group of well-groomed teachers comes from the West Bank. H., a driver from Umm Reihan, approached us: "I can't enter the country," he complains.

"Do you want an entry permit to Israel?"

"They say I'm letting in people without permits."

Is it his job to check the credentials of his passengers? A strange story.

8:00 - We stop in al-Raadyah. A tiny village, 8 houses that are not connected to the electricity grid. As far as we knew from our acquaintance with the M. family, all the residents installed solar systems at their own expense. Now we discovered a sign saying that the project was financed by the Al-Aqsa Foundation under the supervision of the local council. It is possible that the sign we photographed refers only to the house on whose fence it hangs...