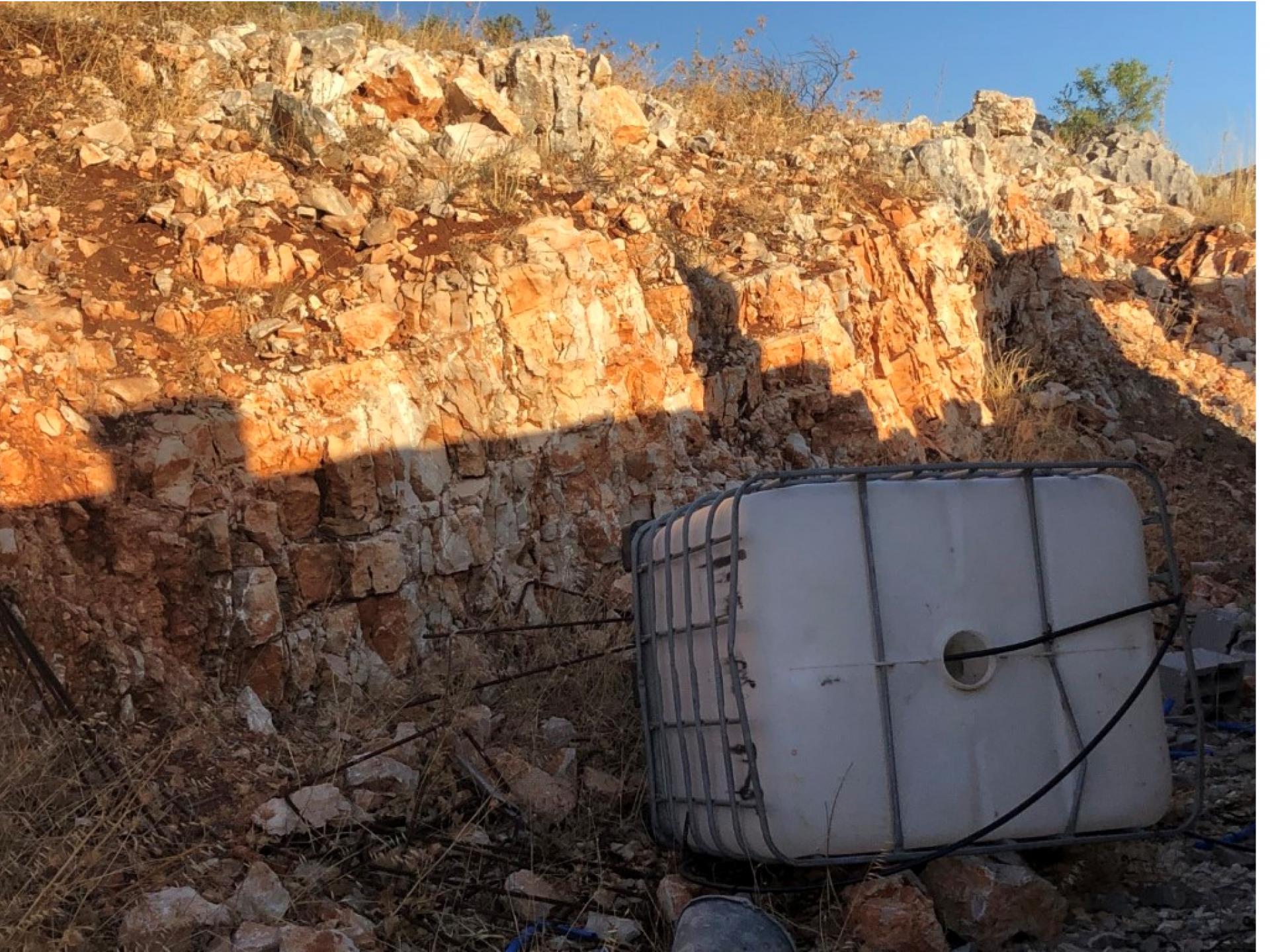 Water tank that will not contain 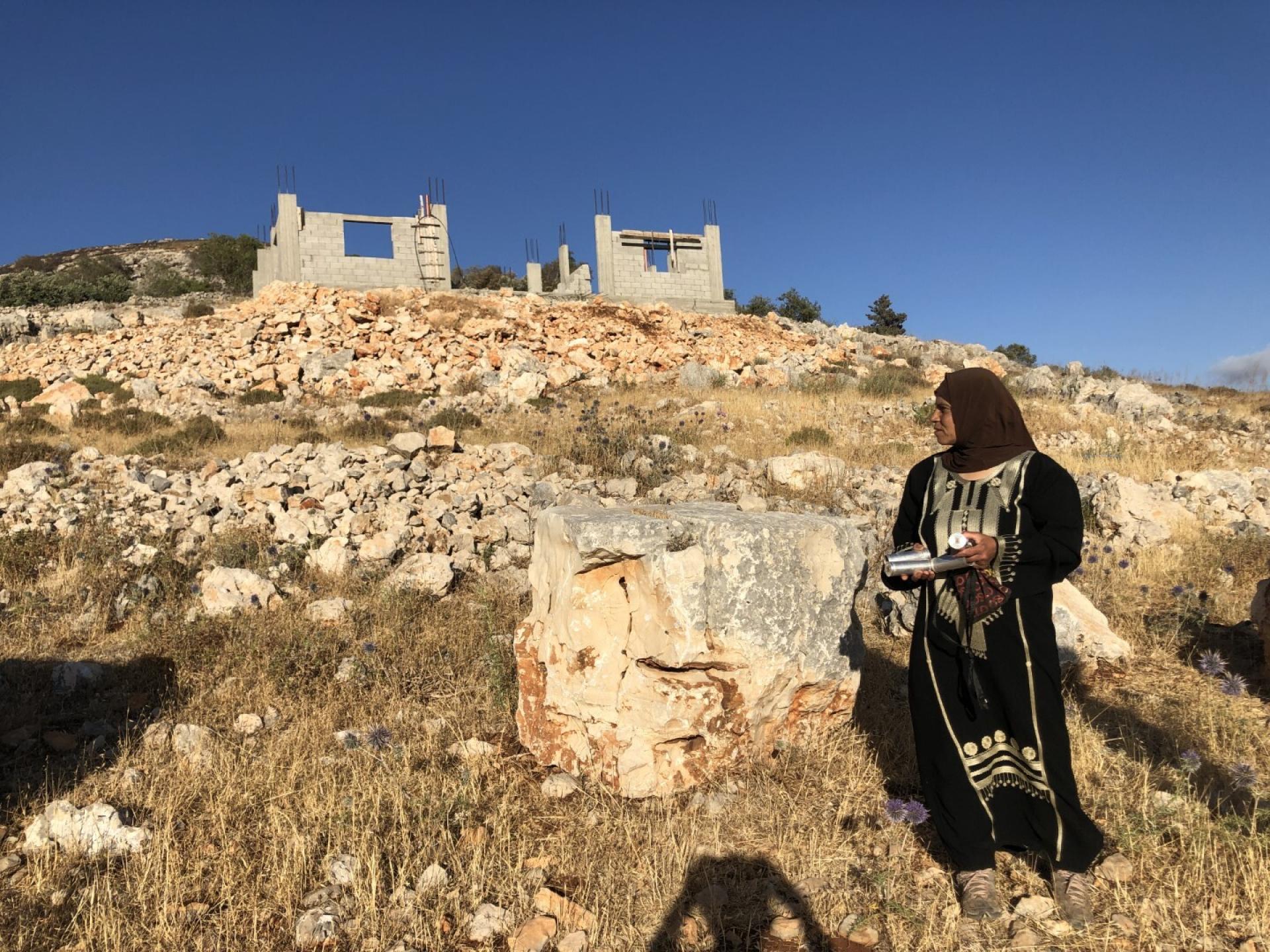 Remnants of the means of deterring the inhabitants 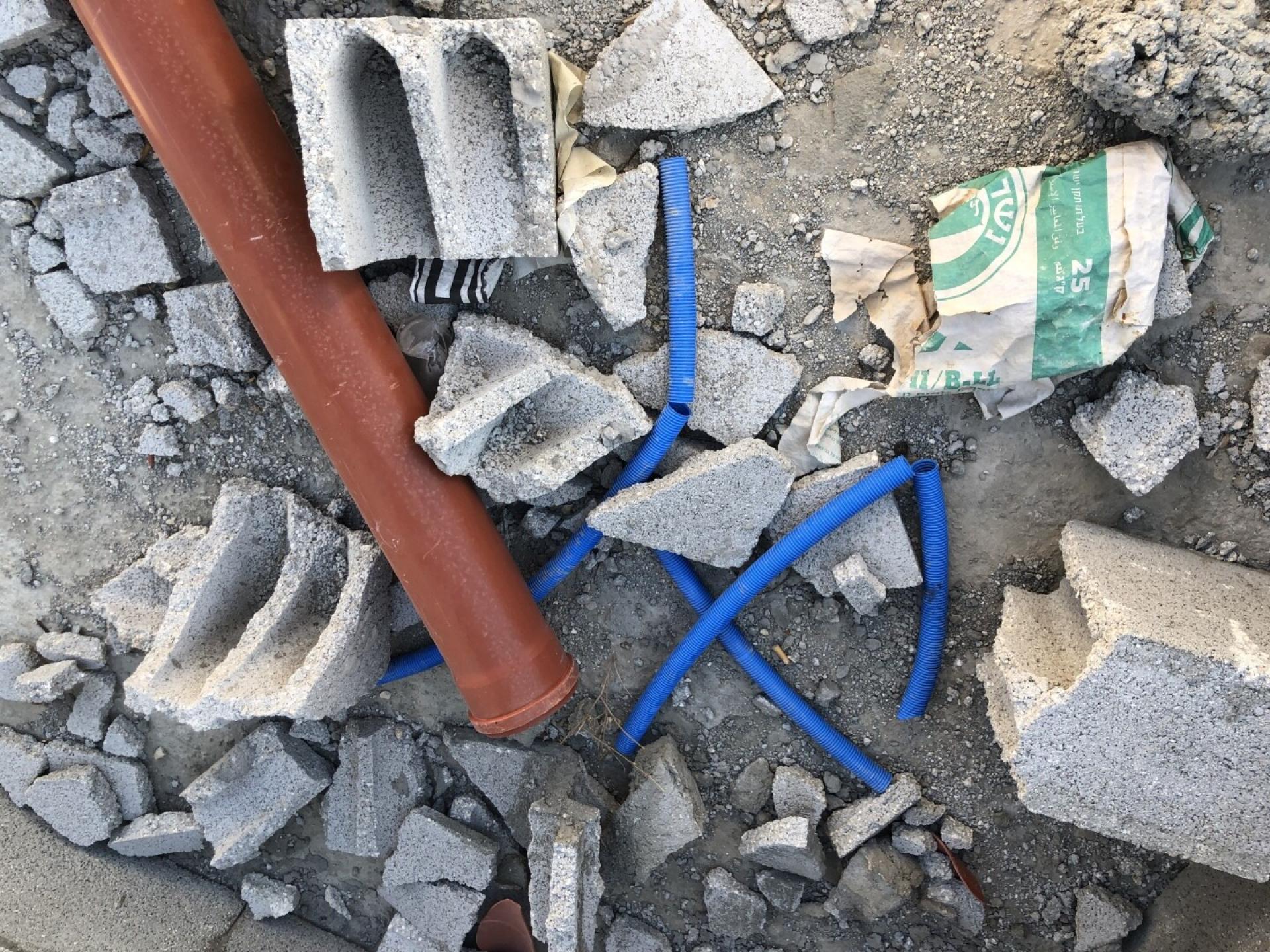 Damage and sabotage to everything possible 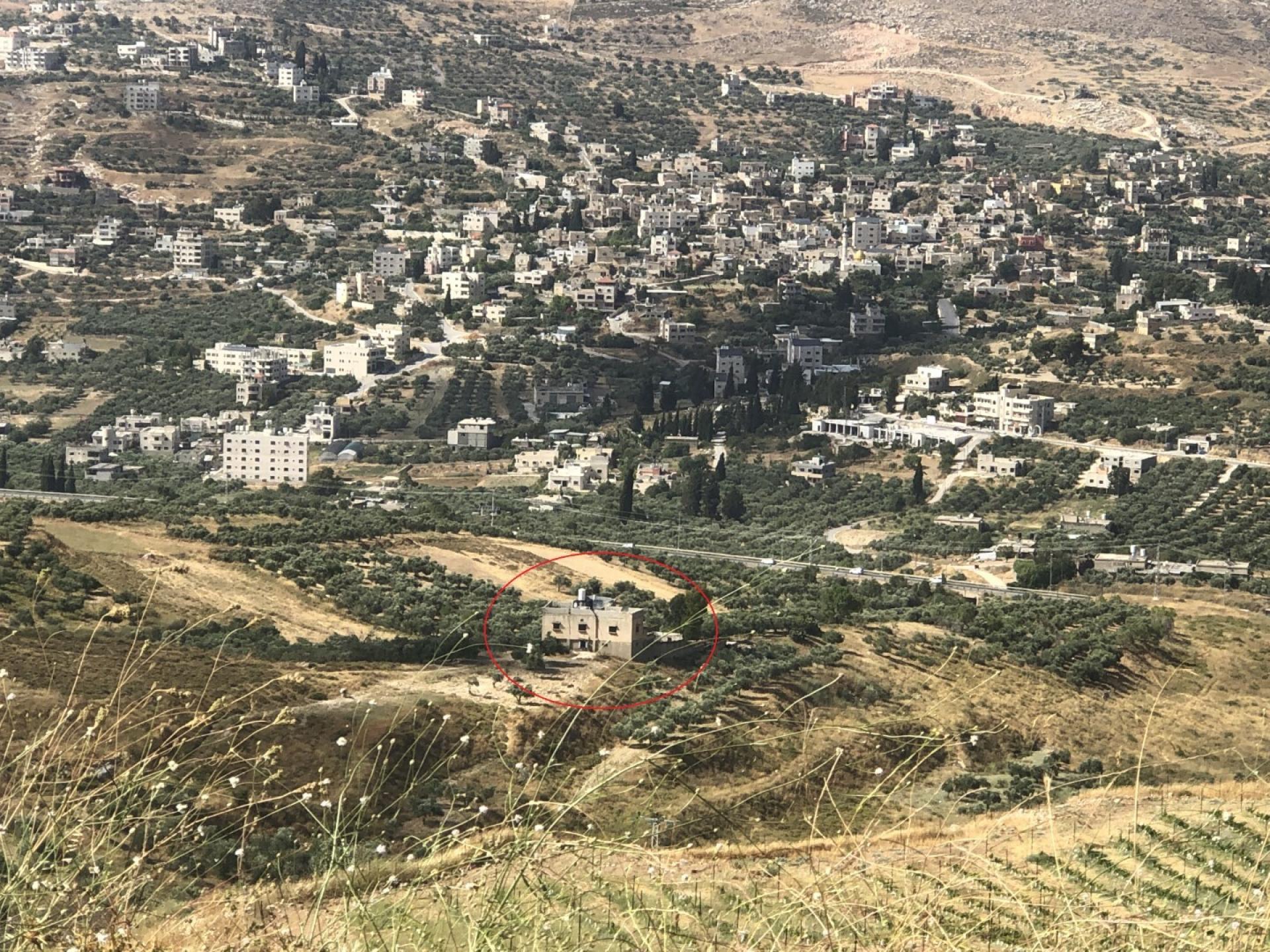 The house at the south end 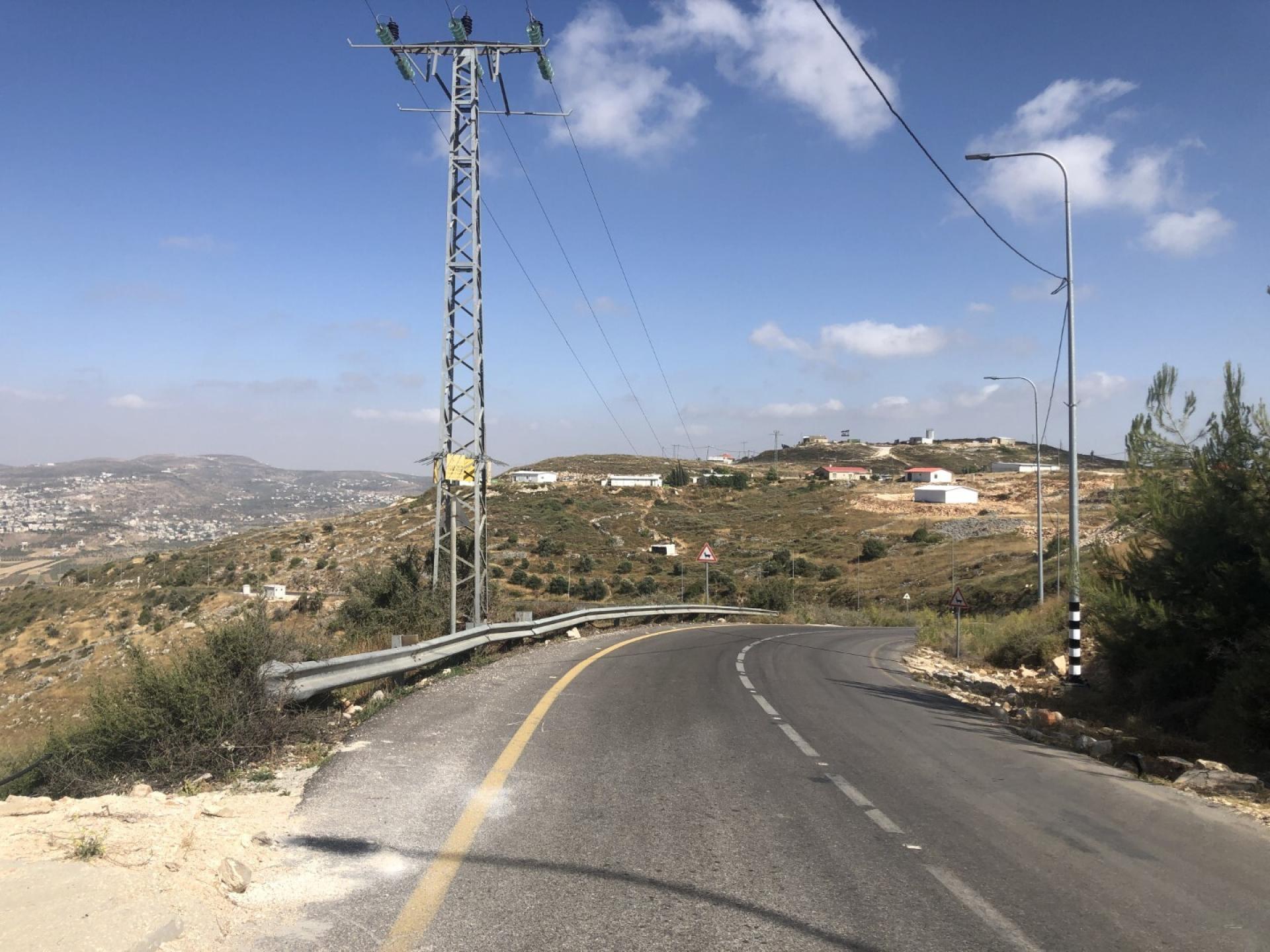 Yitzhar continues on the ridge outside Yitzhar 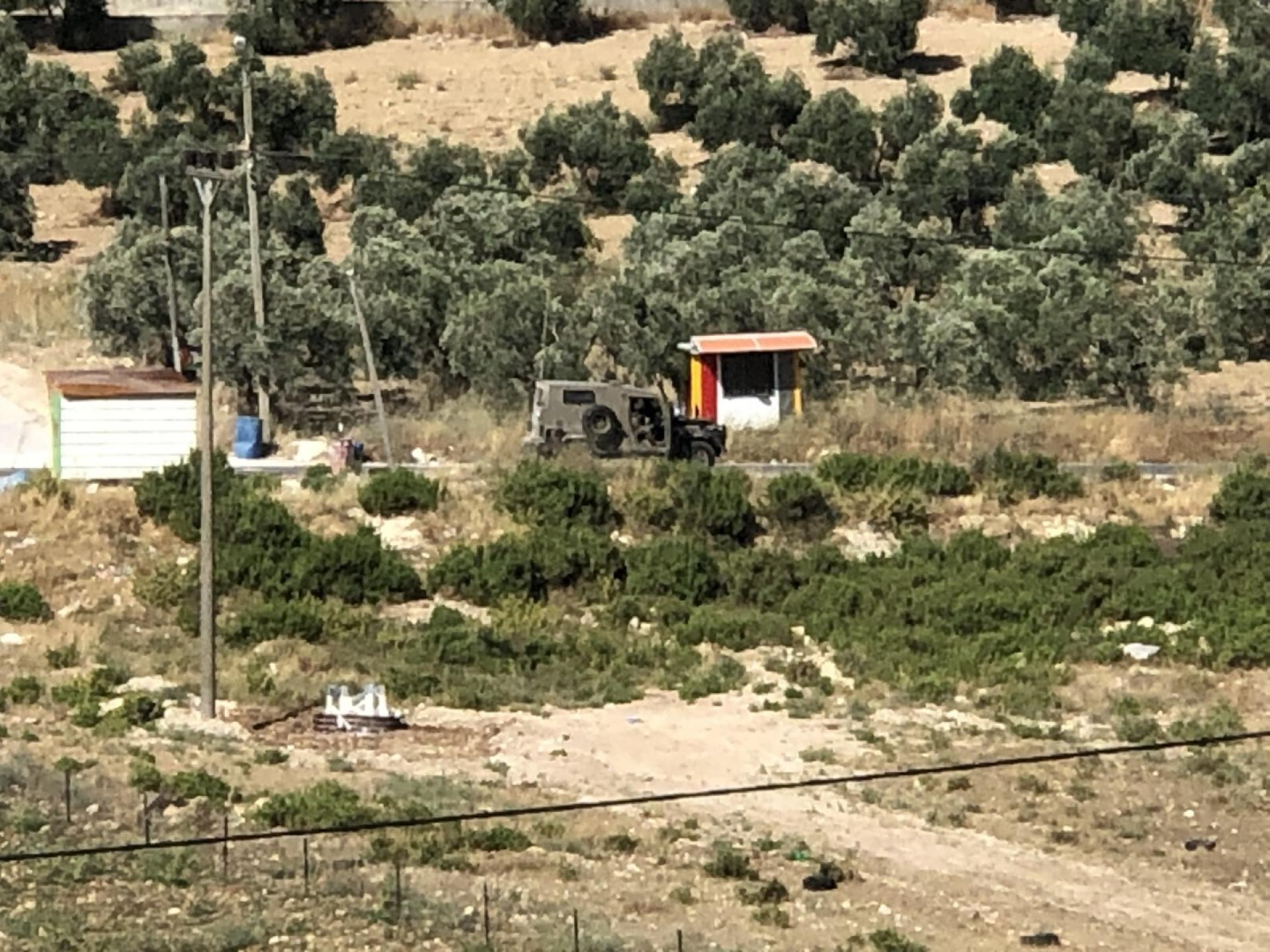 Military presence in Area B 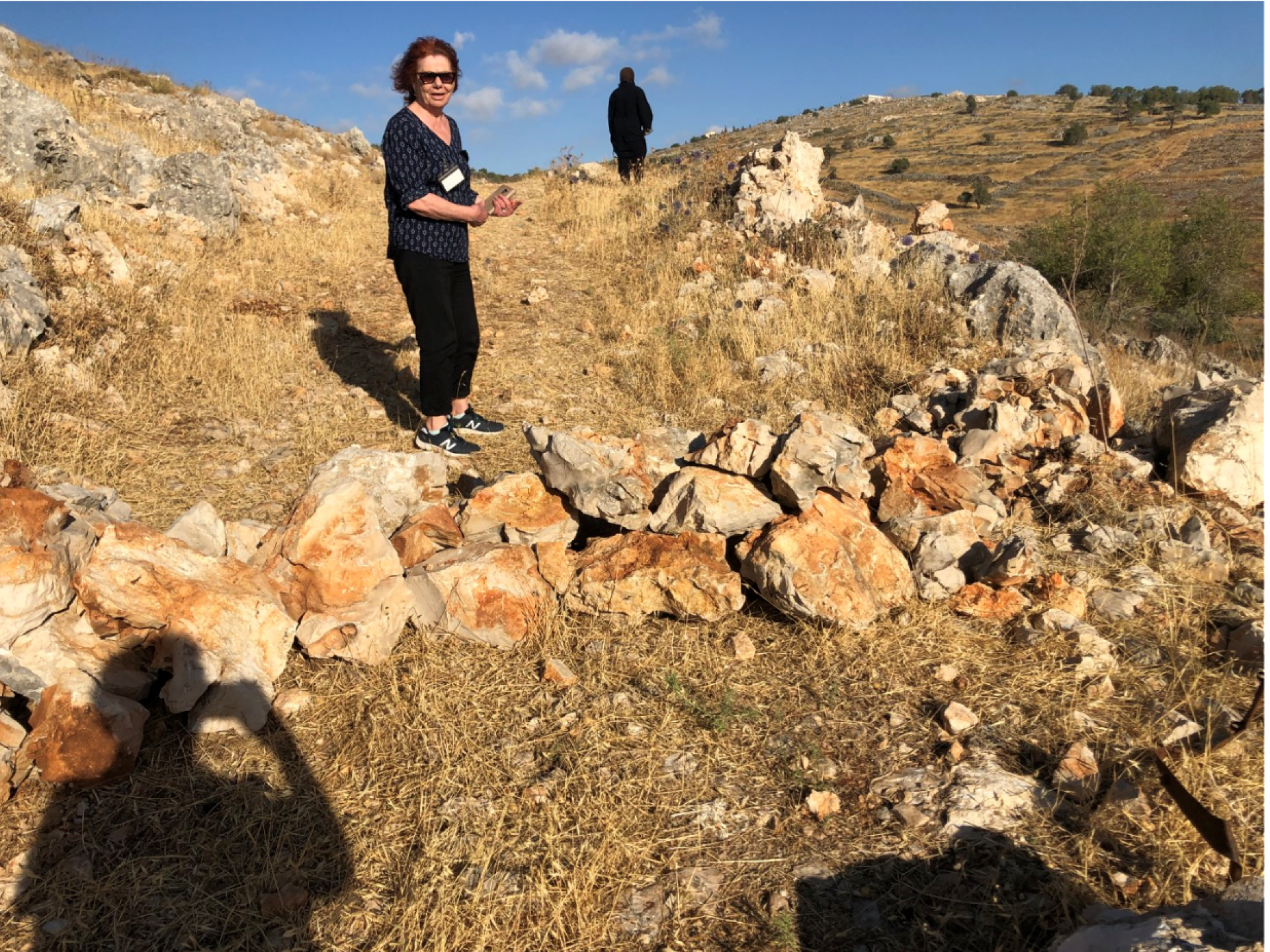 Burin, Obstacles to vehicle by settlers

This road leads to a building under construction on the outskirts of the village. The settlers placed a blockade. 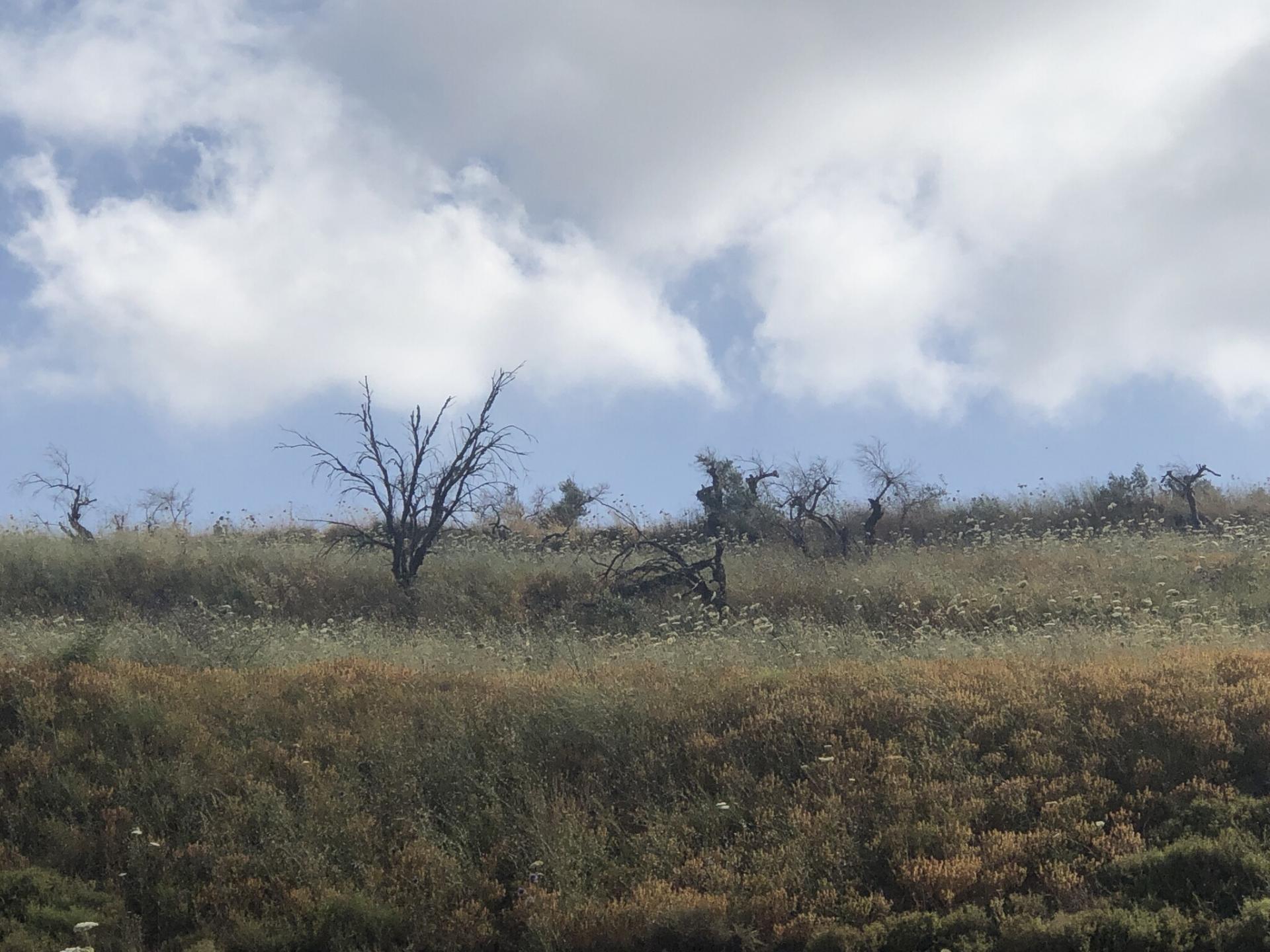 The fire remains from the day before 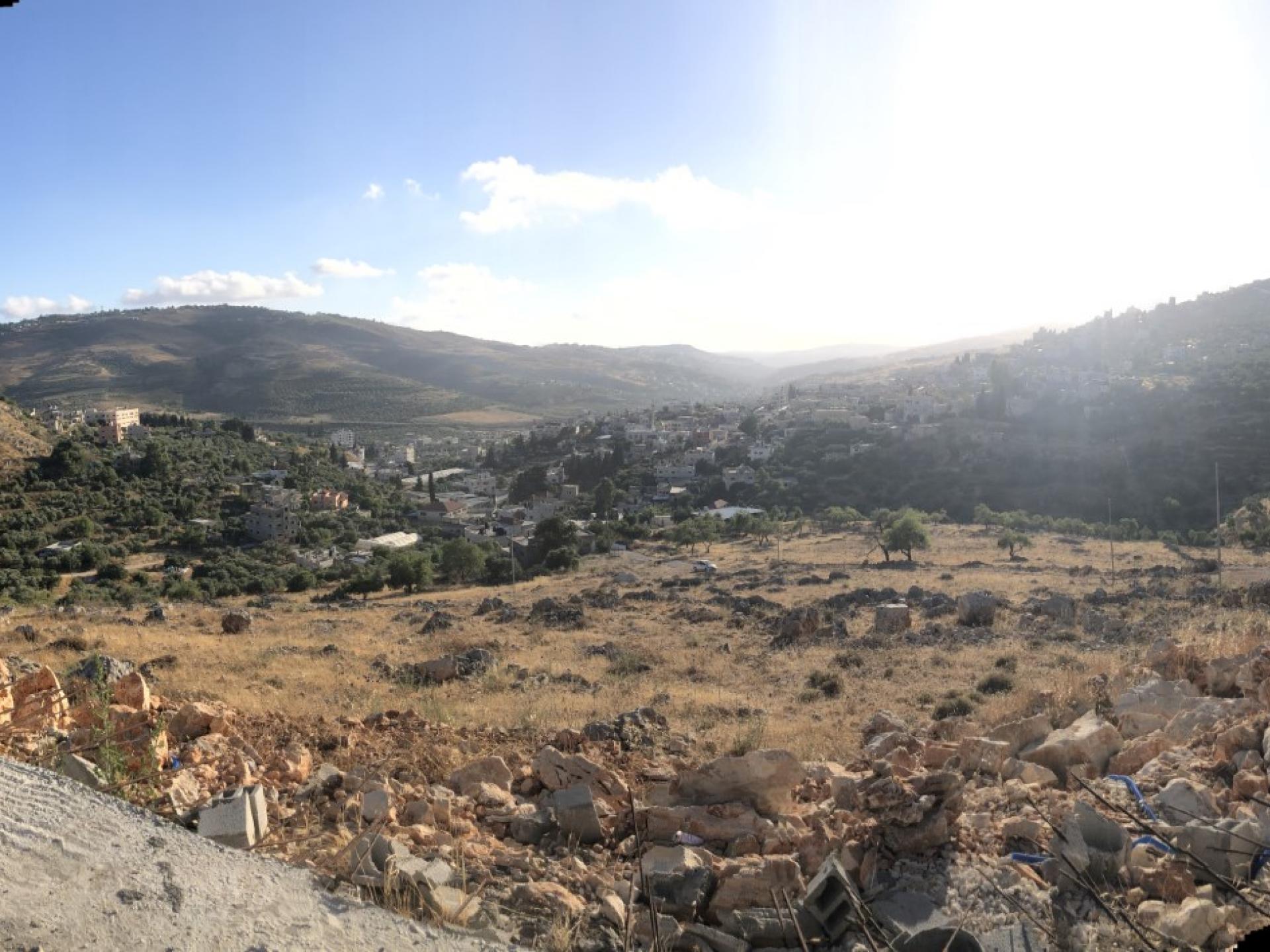 The view from one of the houses that the settlers are harassing - is it gentrified? 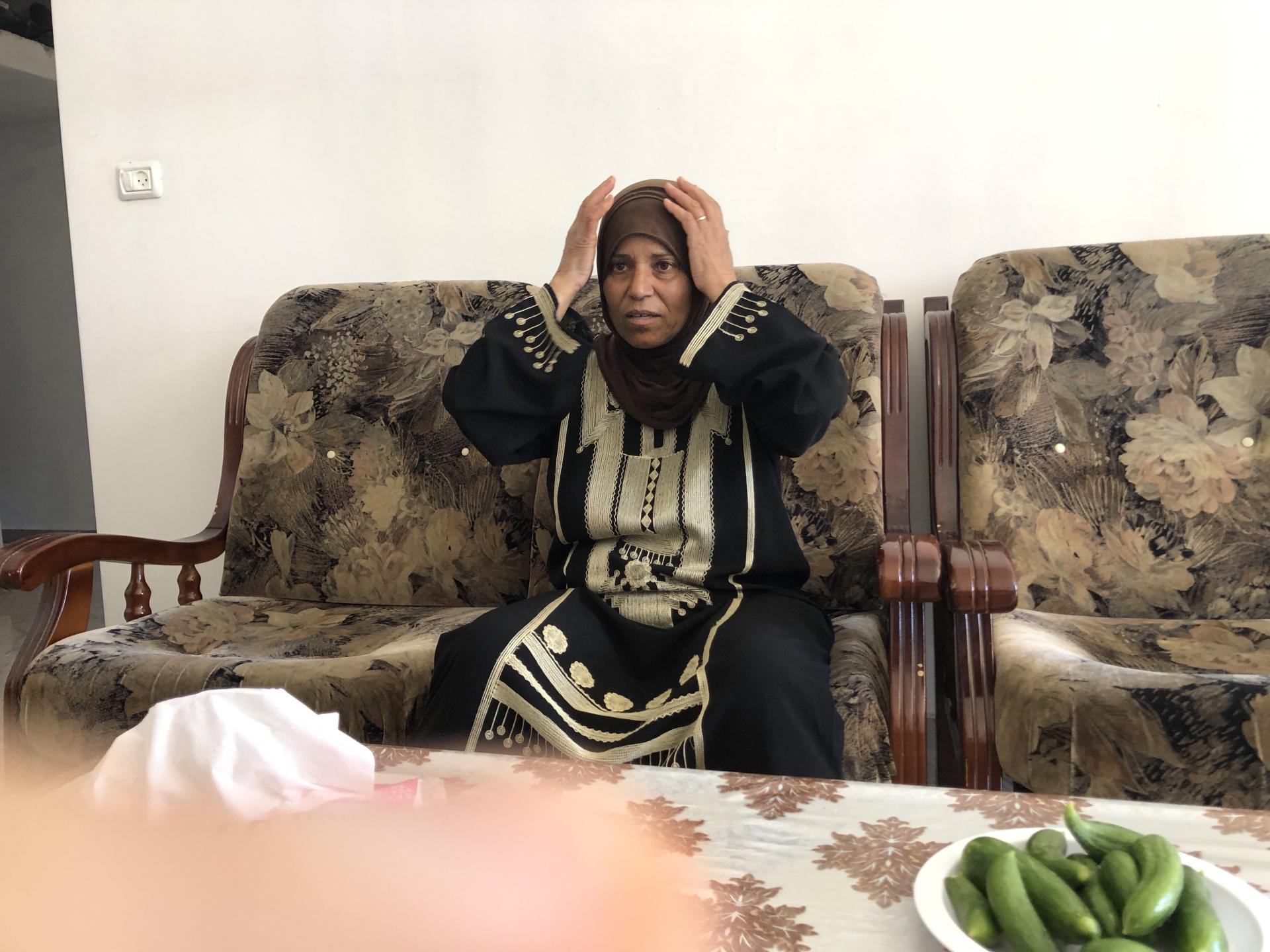 We drove to Burin and its fields to see the results of the fires which the settlers around the village had ignited on the preceding day.

We ascended in the direction of the entrance to Yitzhar.  On our way we observed the regions on the slopes of the hills, where the olive trees of the Burin villagers had been ignited before. Here and there was some budding and some of the trees which were left, were charred. The citizens of Burin are unable to reach their lands, which are situated below, on the slope of the hillside, and take care of them.

We observed the house which is distant from the center of the village of Burin, being situated on the slopes of the hill on which the settlement Yitzhar has been built. This house, like other houses on the outskirts of Burin, is also subjected to the harassments of the settlers. We observed the caravans and other buildings, which have been erected in the last months along the ridge of Yitzhar.

The fascinating landscape of the place does not reflect the oppression, robbery and humiliation, which the Palestinians are undergoing. At Burin we observed apartment style buildings which are not common in Palestinian villages. We descended and continued into Burin accompanied by a military vehicle, which drove back and forth on the road leading into Burin. The built up area of Burin is defined as Area B, in which the civil reign is Palestinian.

We looked at what was left of the trees which had been ignited the day before, near the school (according to people who saw the arson these were probably soldiers).The fure engine which tred to get to the place, was detained.

We continued in order to meet Duha whose family owns the olive trees which were burned.  In her house we tasted from the cucumbers and peaches which she had brought from the fields she owns, in which her family grows them and sells them to the inhabitants of Burin. Duha told us about the happenings of the day before and the arsons on the slopes of the northern hill, facing east. That’s where the people from the Giv’at Ronnen settlement in the east and from the Har Berakha settlement in the north east come from.

They can be seen in the short film, in the course of their action.

The masked rioters came to destroy and damage as much as possible the houses in the process of being built (houses which were being built by permission, on B area land). The building process of two houses on the up-slope of the hill has been stopped by the settlers and the army. The army did not prevent the settlers from destroying walls, vandalize water pipes and throwing the water tank down.

According to the local citizens, soldiers who were present did not stop the rioters, but on the contrary prevented the locals from driving the rioters away claiming that they had no right to approach the houses as this was a closed military area. There is a local organization of young men who wish to shoo rioters away and extinguish fires as much as possible – when the fire engine can’t approach the area set on fire. A silent witness to the deterrence activity of the army are the empty bullet casings of the deterrence means (in the picture).

An unpaved road leads to the houses. The army did not authorize the scattering of a material which would enable driving. And the settlers put stones crosswise to be sure that it would be impossible to drive on the road.

We mounted the hill on the outskirts of Burin, saw the bare areas, black from the fires, and the houses one of which suffers from harrassements and the other in which again the owners are prevented from living.

Another frustration of the inhabitants of Burin is the fact that, as they tell us, in the course of the former arsons the army prevented the Burin fire engine from approaching.  The settlers’ fire engine extinguished the fire which endangers the settlers, but did not extinguish fires in property belonging to the Burin inhabitants.

The magic of the landscape lost its lustre by a reality of robbery and abuse.