Burin - harassment of settlers all year. Burning of hundreds of acres of olive trees, house fires and attacks. | Machsomwatch
Skip to main content
Back to reports search page

Burin - harassment of settlers all year. Burning of hundreds of acres of olive trees, house fires and attacks. 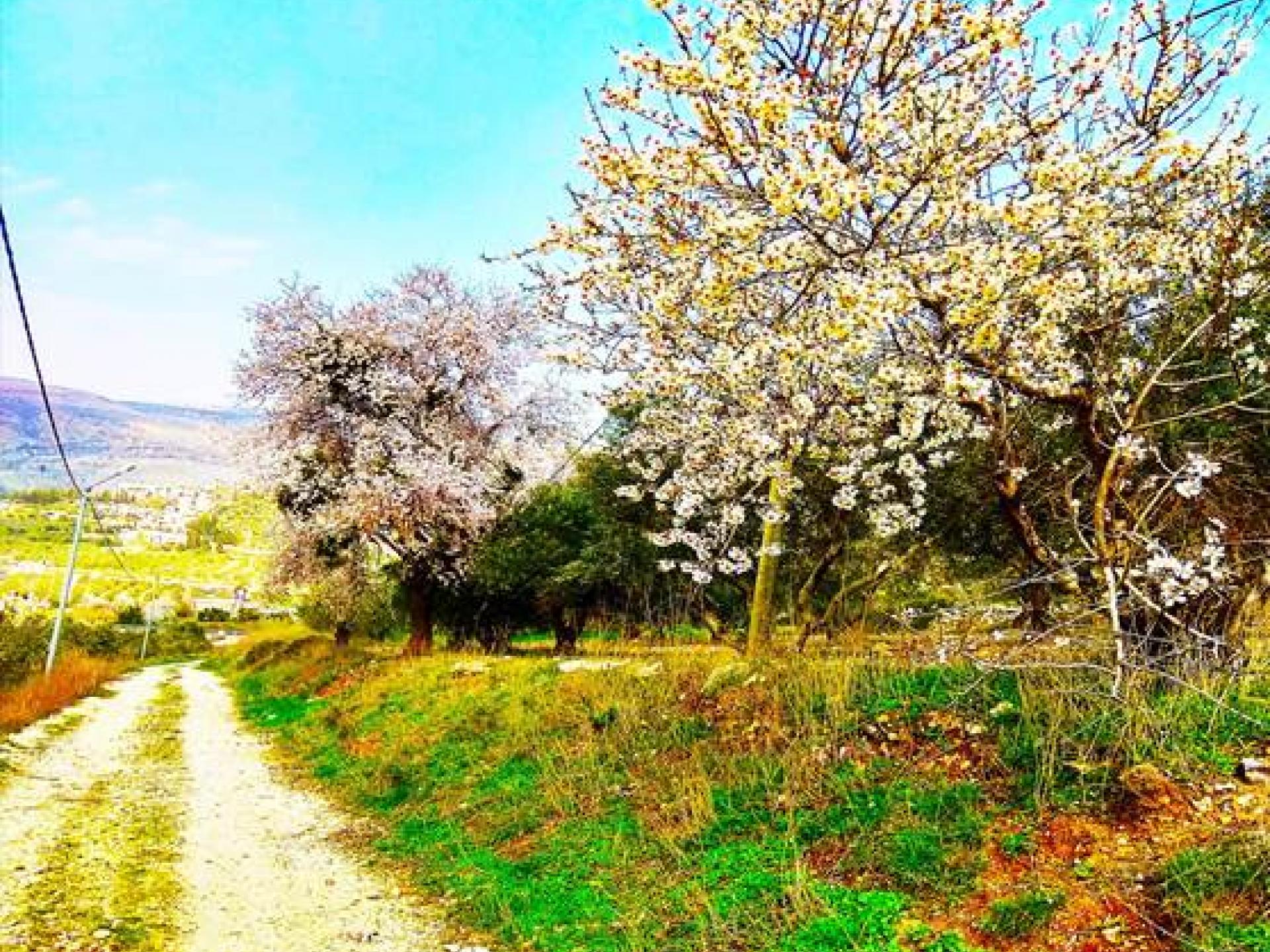 Almond trees blooming up the mountain near Yitzhar 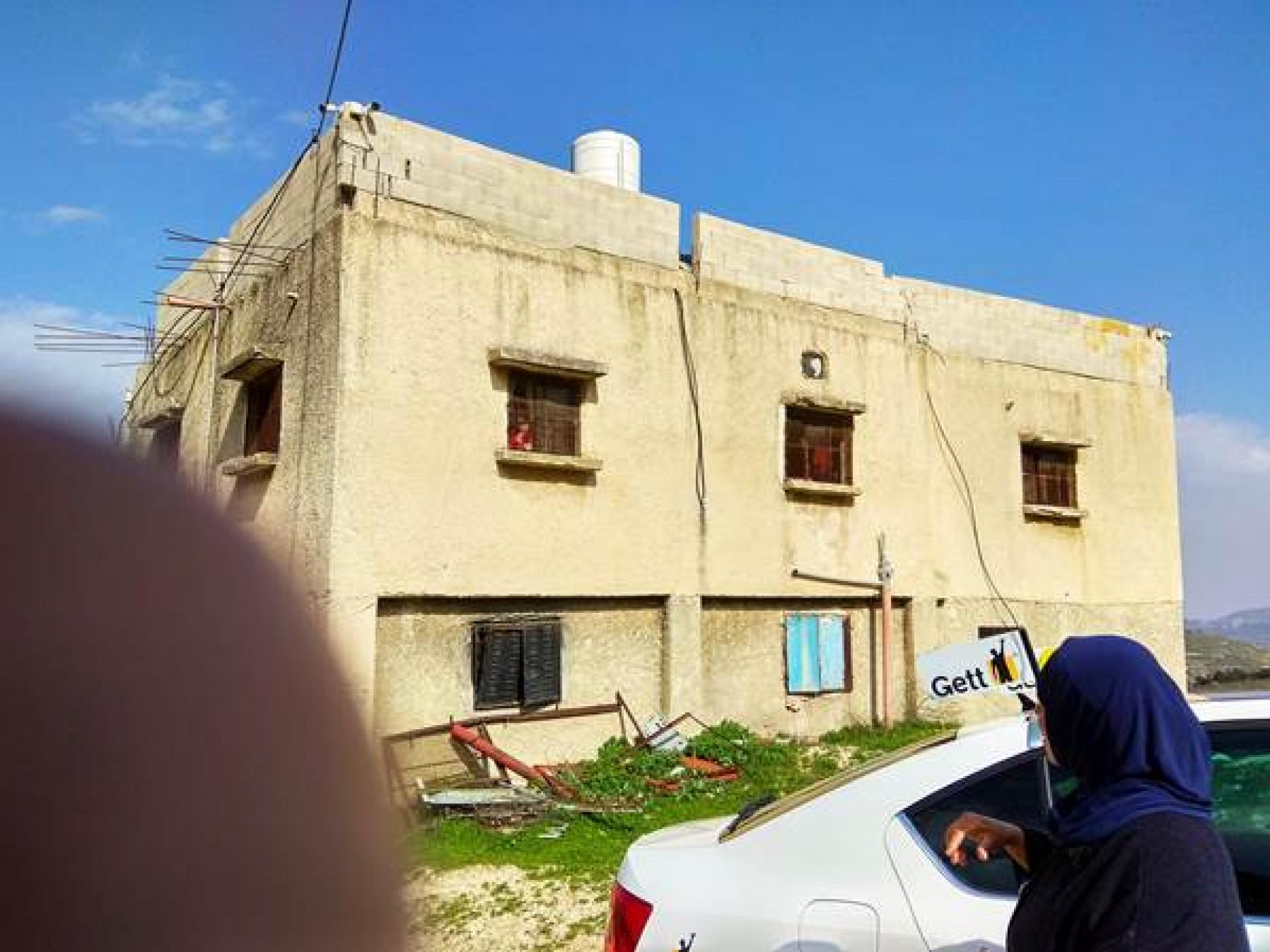 The house in Burin near Yitzhar with bars on its windows 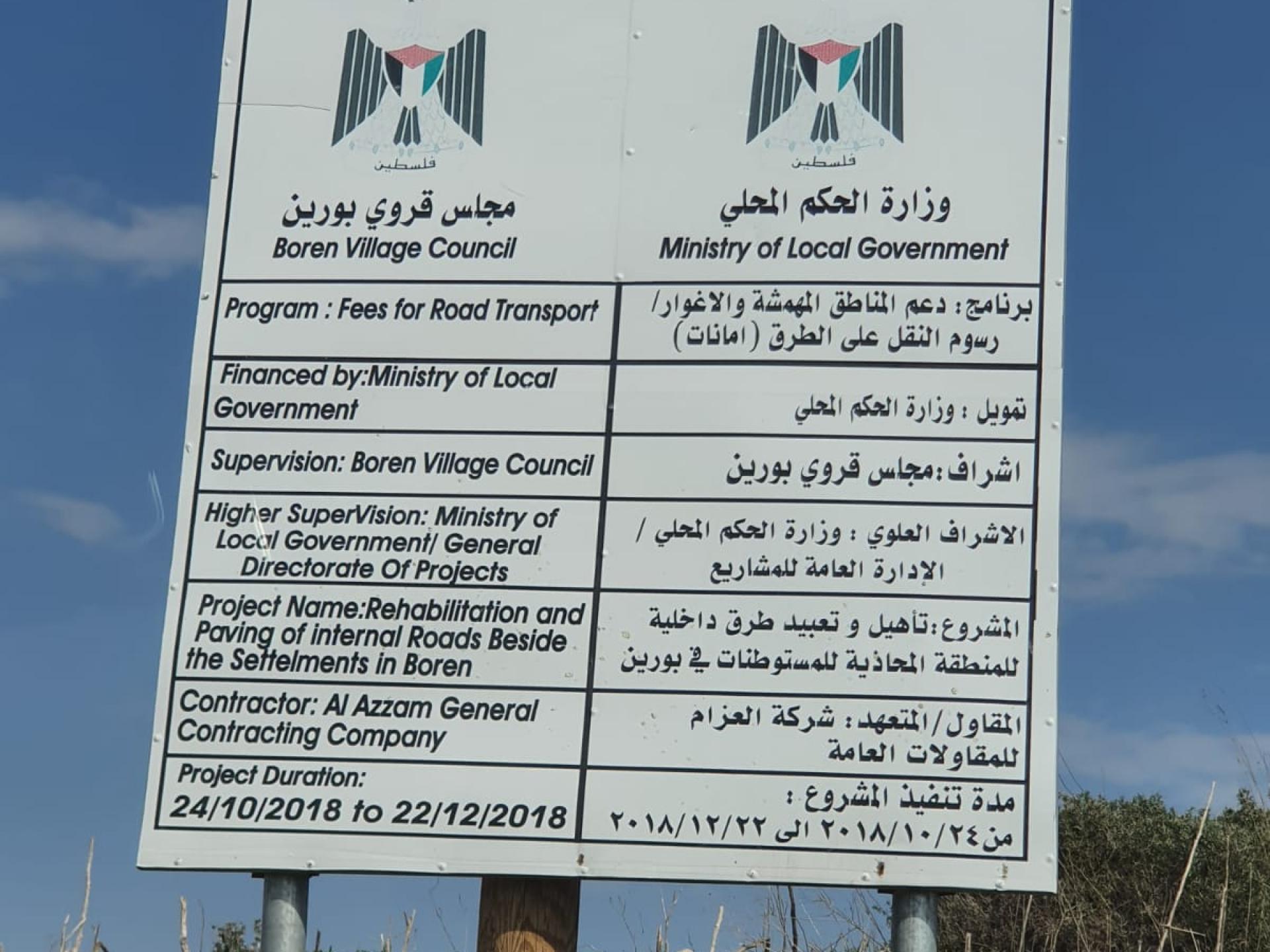 A sign by the roadside of the new road 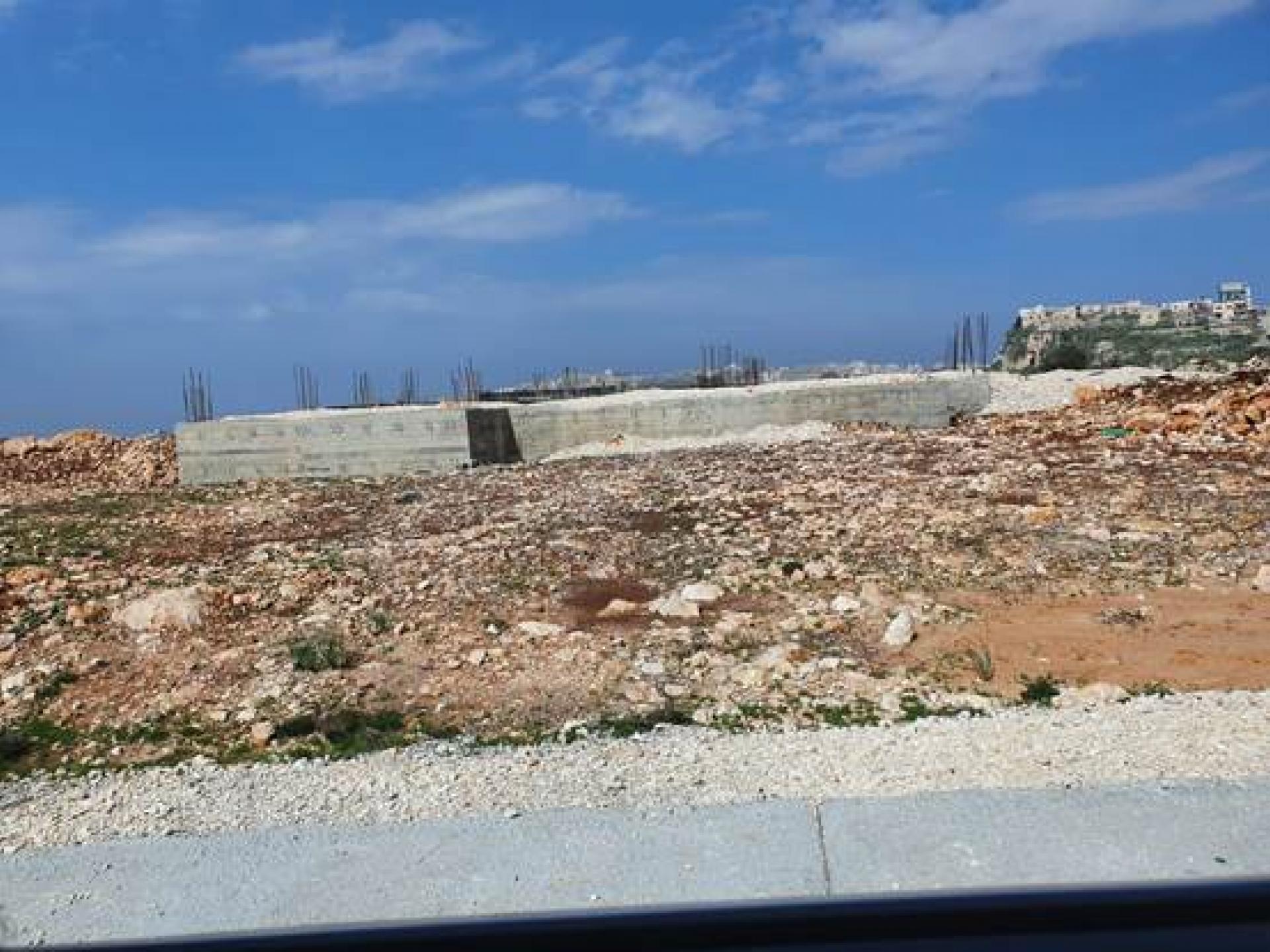 The foundation of one structure whose construction was halted 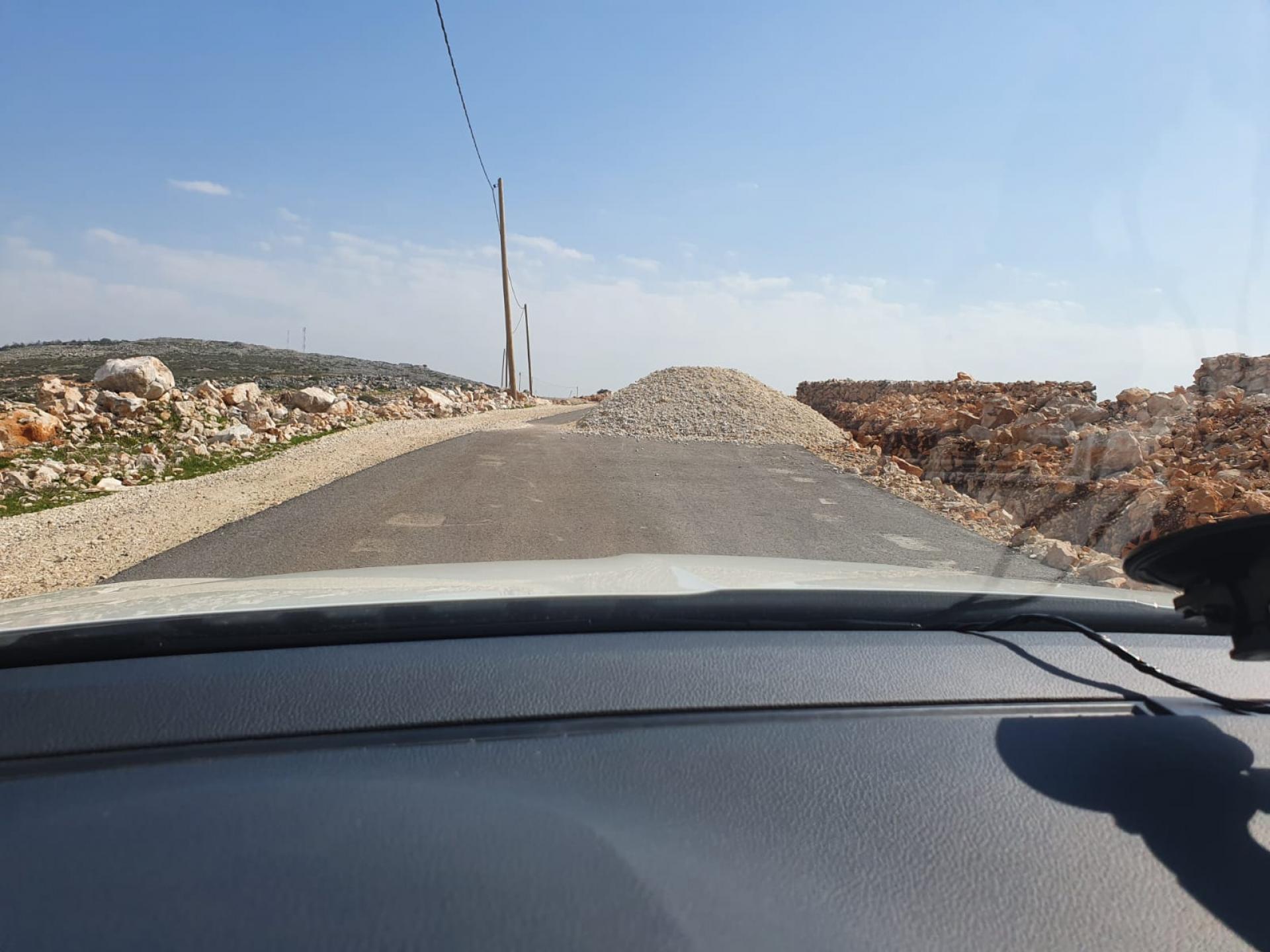 The almond tree blossoms in the blessed land

But a guest arrives, and makes a stand

The hills all echo to his demand

And I’m cast to the winds at his command.

These flowering almond trees grow beside the house in Burin, up the hillside close to Yizhar.  Its owners refused to leave despite the settlers’ harassment, which is why its windows are covered with strong wire mesh, like a cage.  In recent months one can see how an area near the settlement that belongs to village residents is gradually being surrounded by a fence erected anonymously.  Details below.

The village of Burin sits south of Nablus at an altitude of 650-720 meters, on the southern slopes of Mt. Gerizim.  It’s an ancient locality, with maqqams hundreds of years old.

Village lands have been expropriated a number of times since 1967 to establish Israeli settlements (Yizhar to the south, Har Beracha and the Giv’at Ronen outpost to the north) and military bases.  As a result, Burin’s available land and water have been reduced.  Since 1982 more that 2,000 dunums of village land have been declared State Land, and subsequently transferred to the Har Beracha settlement.  The village is subjected throughout the year to harassment by settlers from both sides.  Hundreds of dunams of olive groves set afire, houses burned and attacks.

In recent months it appears that new expropriations are planned of extensive areas to the south and north.

The land to the south, adjoining Yizhar

N. Who lives up the mountain, in one of the houses near the settlement Yizhar, noticed a few months ago that near Yizhar, fencing was underway of a large area that included land belonging to village residents (for some years its owners have been forbidden to cultivate it because of the proximity to Yizhar).  She notified the council head, Nijar.  Nijar came and met an engineer from Nazareth and a man from Kafr Ras Kurkar in the Ramallah sub-district.  He asked what they were doing.  The Palestinian replied that he’d bought the land.  The problem was that none of the owners had sold any land.  Nijar asked the Palestinian whom he’d bought the land from.  It turned out that he’s the fourth link in a purchase chain.  He’s also known as someone who’s already been involved in fictitious land deals whose outcome is that the land is “sold” with forged documents to an Israeli company.  He didn’t present any purchase documents, but the area is already fenced.  Nijar tells us that a shepherd who brought his flock to one of the parcels (belonging to our friend, D.) had been chased away.  The guard from Yizhar told him the land belongs to a Jerusalem Jew who leases it to a settler with a flock.

Since this land is in Area C, the complaint must be submitted to the Israeli DCL.  The landowners presented all their ownership documents.  That was more than two months ago and they still haven’t had a response from the DCL.  Usually when land is expropriated, or “sold,” Palestinians are given 21 days to object, but when they do try to submit objections they’re given the run-around, and at the end of the 21 days they’re informed they’ve missed their chance.

Land in the upper northern portion, toward Har Beracha

We drove north up the hill.  This time D. takes us only to Area B, under the control of the Palestinian Authority.  We drive on a new road paved by the municipality and the Authority.  A sign by the roadside explains.

The photo (one from the photo series above) shows the foundation of one structure whose construction was halted.  Behind, to the north, are the houses of ‘Iraq Burin, an extension of Burin built on a cliff.  In other words, the demolition and construction halt for a “military area” occurred in Area B, but near Har Beracha.  Two thousand dunams were already expropriated for Har Beracha in a similar manner.  It goes without saying nobody bothered to notify them the area had been taken over

In order that residents of Burin don’t dare try to continue building, the army piled mounds of gravel every 50 meters.

Only today we heard it announced that Naftali Bennett, the Defense Minister, forbids Palestinians to build in Area B also, “to prevent the spread of Palestinian construction.”