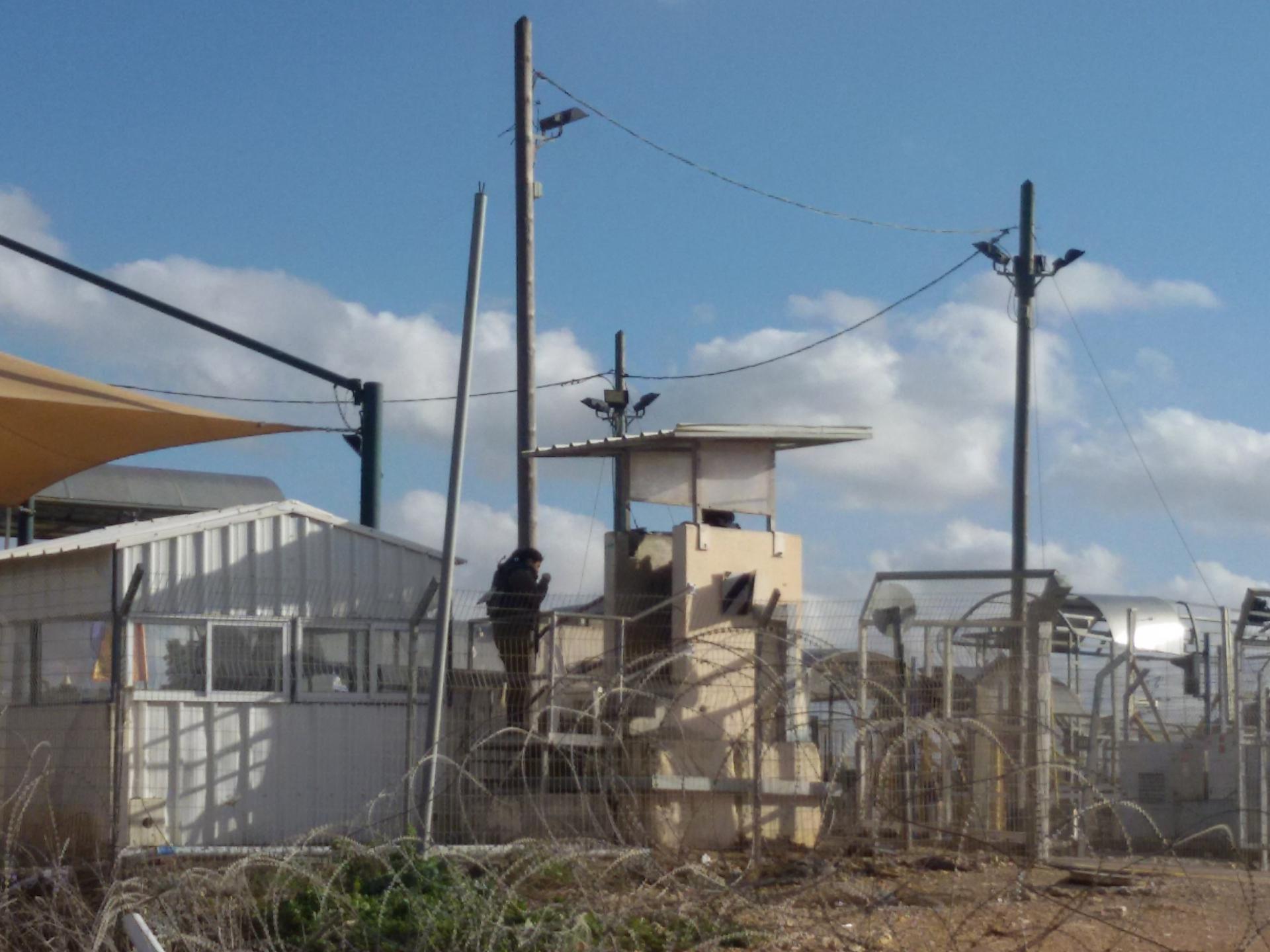 15.00. The main movement in the area was the ponytail of the woman soldier who sat in the raised observation post, because o the strong wind. The checkpoint itself was empty, the field around it ploughed and apparently also sowed, the container relatively clean with a long seatless bench, litter next to the road and the remains of a coloured umbrella. Only individuals passed in the direction of the W. Bank, one of whom threw at us the remark that this morning the checkpoint opened on time. Three  elegant cars passed in the direction of the W. Bank. The only car that wanted to pass towards the seamline zone was stopped and had to return. Why? There was no one to ask. The occupation as usual.

15.30.  Relatively light movement of workers returning to the W. Bank. At the same time loaded trucks passed towards the seamline zone.

A taxi driver from Barta’a  approached us about his taxi that was left on the other side of the checkpoint. He the owner of a taxi station, with 7 taxis, one driven by his nephew. It is now three months he has driven to the W.Bank, back and forth. Today he was not allowed to pass and he does not know why. Neta contacted Ron, assistant manager of the checkpoint, who told her that the taxi owner could manage his own affair and that he should make contact with Amir.  It turns out that the driver does indeed know Amir but does not know how to find him, and suggested that we go with him to the guards to ask them.  He apparently is cautious and afraid. To our surprise, the guards were very polite to him and asked him to wait on the bench opposite. We left him and joined the workers inside the sleeve

The stream of workers became stronger. Some also came up in the opposite direction,  mainly families who exited the terminal at the top of the sleeve crossing to the seamline zone. There were parents with 2 small boys, one pushing a plastic wheel.  We met three young women with blue I.D. cards, perhaps students returning home. And there was a large man with plastic bags, who explained that when passing with fish, the guards slow down passage. He acquired them in Jenin and, no, he is not interested in the disturbances in town today. It’s not his business. Another worker complained that in order to renew his magnetic card he had to go to Salem.  But there is a particularly long queue there and they only manage to deal with 25-40 people each day, and others have to return home. It can take up to three days to get a card – three working days wasted.

We went back up in the sleeve, wondering what had happened to the taxi driver. From afar we saw a yellow taxi with open doors, luggage boot and motor cover. Yes, it was his taxi. It was explained to him that only the owner himself was entitled to pass with it, no one else.

Afterwards I thought: Once when I was little I played the game “Parcel has arrived”, according to Ephraim Kishon’s idea to learn what permits were necessary in order to release a parcel at the Post Office, including grandparents’ wedding certificate. One could apply this game as “Machsom passage” – with what documents and procedures one should equip oneself in order to pass checkpoints without sudden surprises.