Northern Checkpoints: Another Year has Passed and the Tobacco is in Flower Again | Machsomwatch
Skip to main content
Back to reports search page

Northern Checkpoints: Another Year has Passed and the Tobacco is in Flower Again 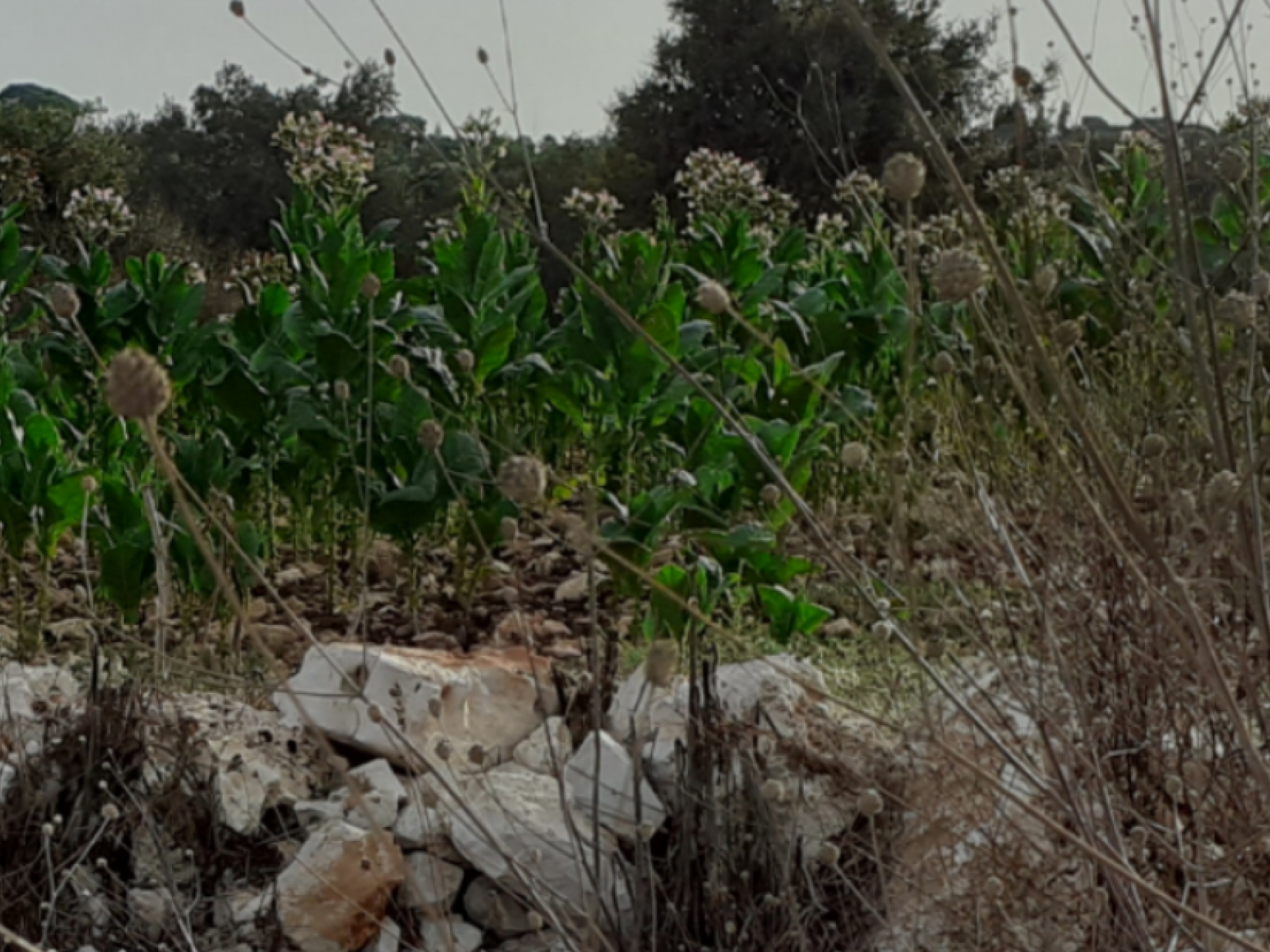 The tobacco is flowering again at Tura Shaked Checkpoint 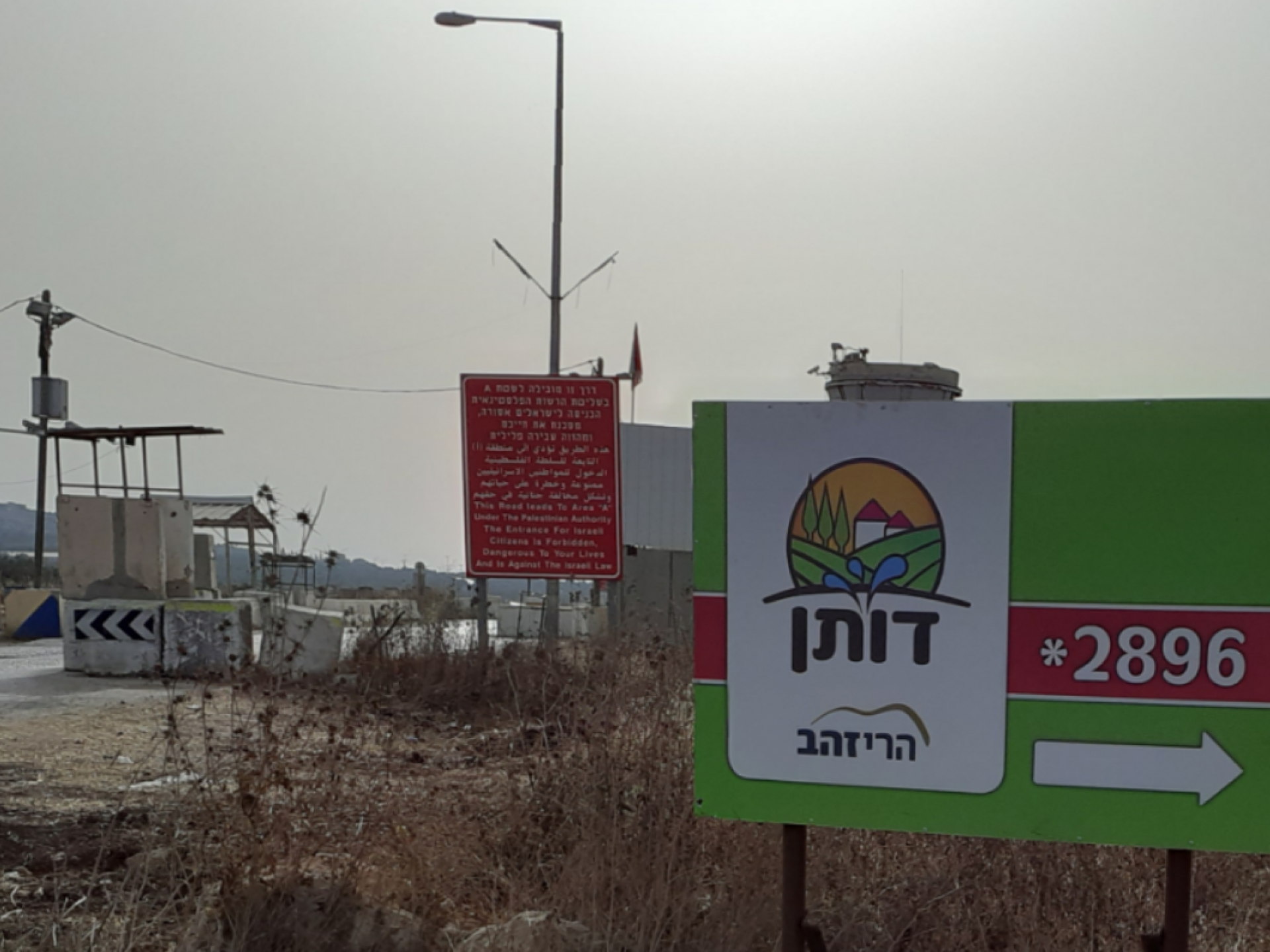 Yaabed – Dotan Checkpoint: Sign advertising new houses in the settlement against a background of a sign forbidding entry into Area A

We arrived early.  A girl and boy walked up from the small Bedouin settlement below the checkpoint.    The young man continued on, while the smiling friendly young woman stayed to wait for a ride.  The military police also arrived early, but at 06:30 when the checkpoint was supposed to open, they were still waiting.  A soldier approached us on his own initiative and explained that they were waiting for an officer from the District Coordination and Liaison Office because without him they could not open the checkpoint.   We explained that there was often no representative from the DCL at the checkpoint, and he answered  that there had to be a special reason for that.

At 06:40  the checkpoint opened without a representative and 12 people and one tractor were checked and crossed to the seamline zone.  A long discussion took place with an elderly man who always crosses here.  IN the end he crossed.  Evidently last time he arrived in the afternoon and the checkpoint was closed, and he returned through Barta’a Checkpoint.  Evidently the computer here does not converse with the one at Barta’a, which immediately arouses the suspicion that he did not return home and remained in the seamline zone or in Israel.  Perhaps the fact that he is older and allowed to cross without a permit aided him to get across.

A man complained that for more than a month the checkpoint has been opening late at 07:00 instead of 06:30.  30 people and one car were waiting to cross to the seamline zone.   A car crossed to the West Bank.  A young man who is a resident of Dahar el Malek explained that his grandmother had died and he was returning from the mourning tent in Yaabed.  The garbage container was overflowing again, but near the security road but not hear the waiting shed the tobacco was flowering again beyond the thistles near the checkpoint.

We drove past Barta’a Checkpoint to Yaabed Dotan Checkpoint.  Near the junction there was a sign advertising houses in the settlement that were available for less than a million Shekels for a house on the ground floor.

It appeared that the checkpoint was not manned.  Next to the red sign forbidding entrance into Area A the advertisement for houses with the phone number to call was clearly seen.

We stopped at the grocery store belonging to our friend F in Emricha.  There was good coffee and we had a nice conversation despite the language barrier.

We didn’t remain at the checkpoint.  There were few people arriving at this time of day.  People were walking up the fenced – in sleeve

to the parking lot on the seamline zone side.  A few people were waiting for rides.  We assumed that they worked in stores in Barta’a that don’t open early.

Today was particularly hot and dry.  We heard about a fire in the area of Barta’a, Katzir, Ein Sahala, and Arara on the radio and Internet.  Many houses were evacuated and some were burned.