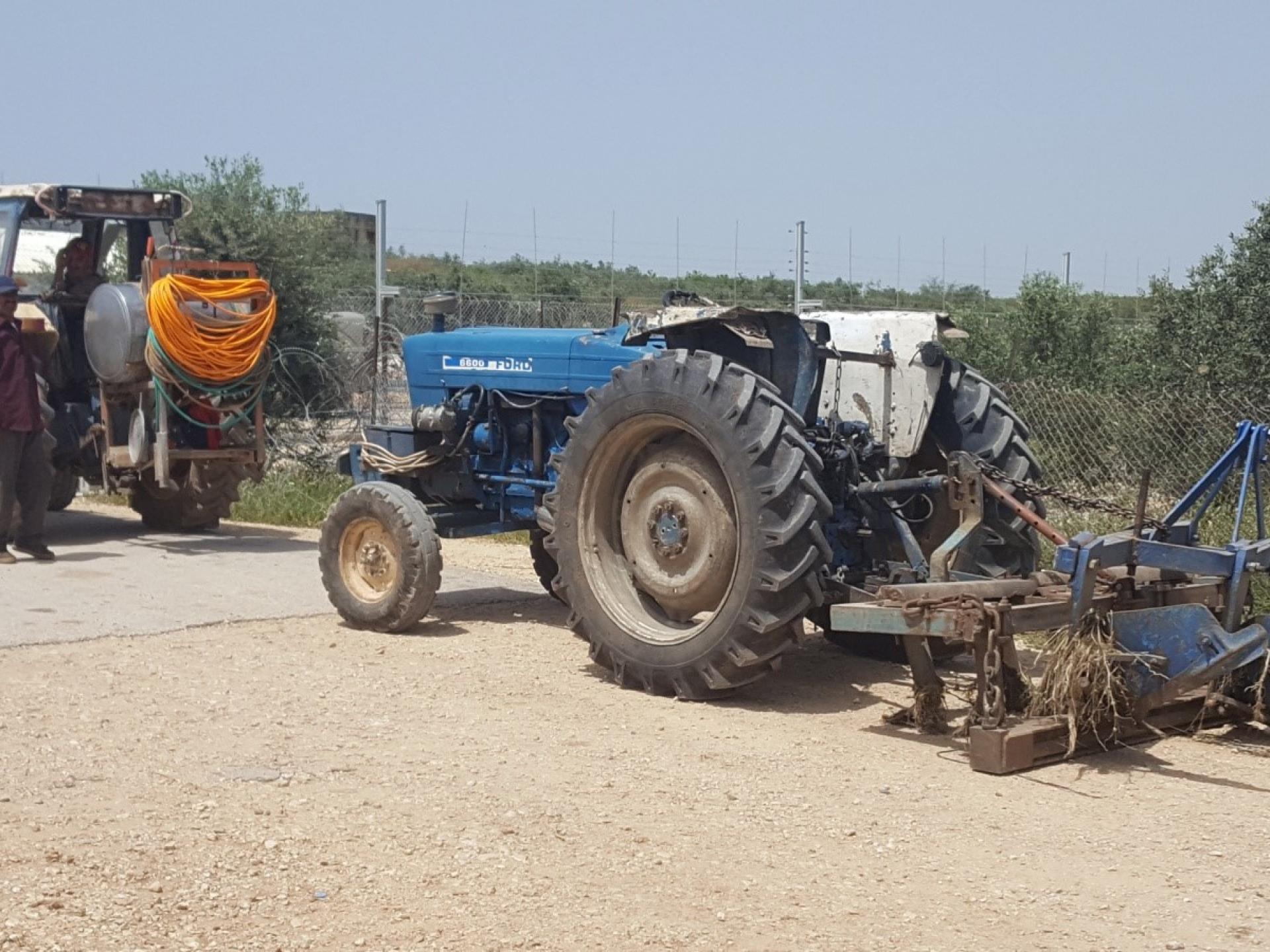 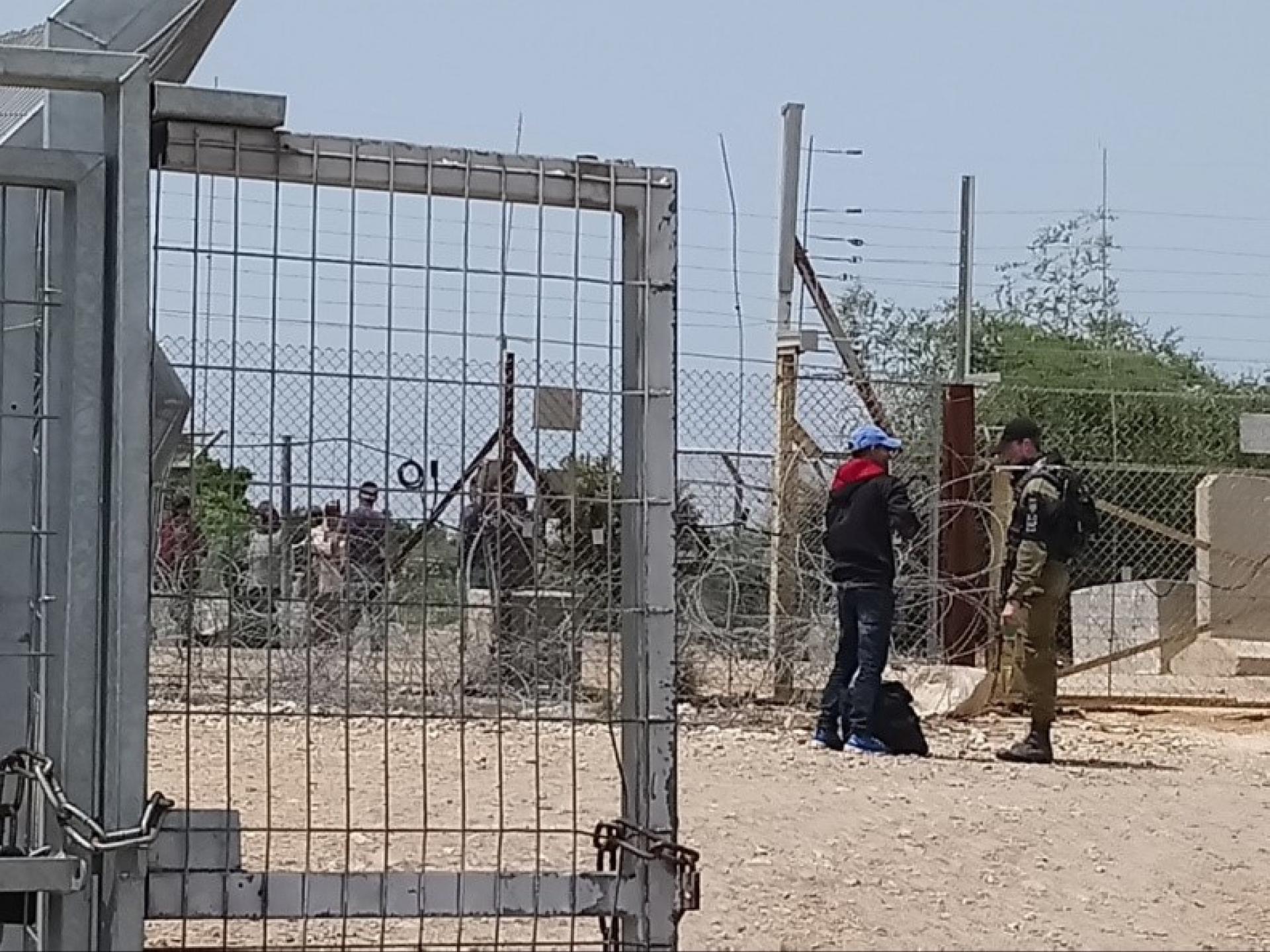 Azoun – at the town entrance, no soldiers. We hear from people that last night (April 16) soldiers entered five homes, broke, crushed and shattered as they are well adept at doing. After every such break-in, the home owners are forced to repair especially broken doors. Five youngsters were taken away,  and at this point their parents have no idea where and why. At least once a week such break-ins take place in Azoun.

12:30 We came early and entered the shed near the water pump, joining five persons already seated there. Two youngsters help their grandfather who is in charge of the pump. After school they too come to the shed. A farmer (whom we met in the past in Karfiyat) grows avocado. He sounded two complaints: the opening time of this checkpoint are extremely inconvenient. The Palestinians wish for it to be open from 6 a.m. until 4 p.m. This way everyone will manage to enter and exit as the needs arise. Secondly: the Israeli army has closed off a track leading to families’ farm lands. Now many farmers are forced to reach their own lands through the land of others, and cause them damages. They demand that the existing track which even contains a gate would be re-opened, making life easier for everyone.

12:35 – The gate opens on time. Entering were 3 trucks, 3 tractors, a vehicle and a cart, a private car, and 3 pedestrians. Existing were 2 tractors, one loaded with thyme, 6 bicycle riders, 2 trucks, 2 women and 4 men on foot.

13:25 -  the gate opened on time. Entering: a tractor carrying a spray tank, a private veicle and 2 tractor owners, one from Jayyus and the other from Falamiya.  The Jayyus villager tells us that the night before last, Israeli soldiers entered a home in the village and took away with them a 12-year old boy. The family still knows nothing of his whereabouts.
Exiting: a tractor with 4 passengers, a pickup truck, and 4 pedestrians.

Whoever arrives cross right away. We leave and continue northbound.

Sur village: we stop at the grocery store. The owner is in a wheelchair. 4 years ago he was injured in a road accident, underwent surgery in Hadassah Hospital Jerusalem. He wishes to apply for a permit to enter Jerusalem to pray, but is blacklisted because 11 years ago, while still young, he helped a Palestinian who was involved in terrorist activity and had him sleep over. Since then he is prevented entry into Israel.

We proceed to our meeting with our friend G., with whom we set a meeting. Over the years relations between Sur villagers and their Jewish neighbors of Sal’it were good. Sal’it is a settler-colony in the form of a secular moshav along the western edge of the central West Bank, founded in 1979.  Most of the Sur villagers find their livelihood working in Sal’it, in gardening and various jobs in the colony’s industrial zone. Since 2011 Sal’it has been expanding in order to absorb another 100 families. Lately relations have changed, especially with G. In order to reach his own land a special road was paved for him. Until a few months ago the gate was opened when he coordinated this with Nati, the security official at Sal’it. One day, with no explanations whatsoever, the gate remained closed, and for the past two months G. has not been able to access his land.

He has  already appealed to the Palestinian as well as the Israeli DCO (District Coordinating Officer) but did not get any answers. He can get to his land if he chooses to make a 105-minute long trek through Tayibe. Eyal of the DCO office instructed Nati to open the gate until the meeting, but Nati refuses. He doesn’t take orders from the DCO. G. says with Nati it’s all about his manhood…

There’s another possibility – a paved road north of Sal’it that is fenced off, but its gate is constantly closed. If it were opened, G. could reach his work within minutes. But why make things easy if you can make them impossible?

Sal’it, like many other settler-colonies, was built on Palestinian-owned land, but most of the landowners are already deceased and re-registration of ownership is impossible. G. emphasizes that no one of Sur village had sold any lands, and in spite of the fact that this land is theirs, the relations are good and the Sur villagers don’t wish to go to court and mar them. They prefer making a living. G. is 63 years old. He can enter Israel whever he likes. Not to his own land. Absurd? Israeli logic. Tayibe cattle entered his olive grove, fed on branches and caused great damages. G. does not wish to go to court. He is afraid that the judge’s ruling will be irreversible. He wishes to find a peaceful solution. He still regards most of the Sal’it colonists as family. We accompany him to his land. 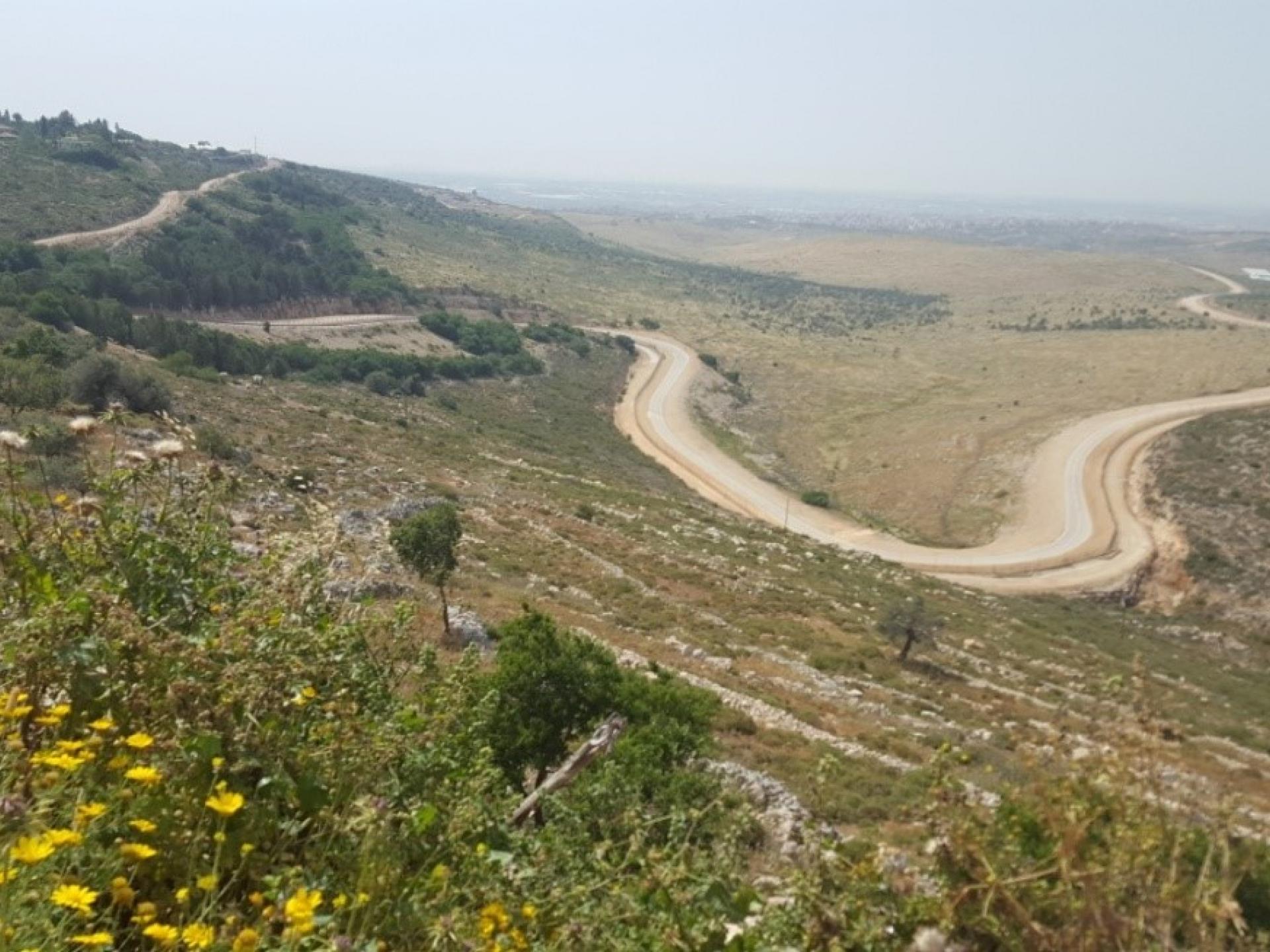 The”security” fence track – prior to the erection of the fence, villagers of Sur would descend the hill on donkey-back and reach their farmland directly. Now this is impossible.
Photographer:
Shoshi I 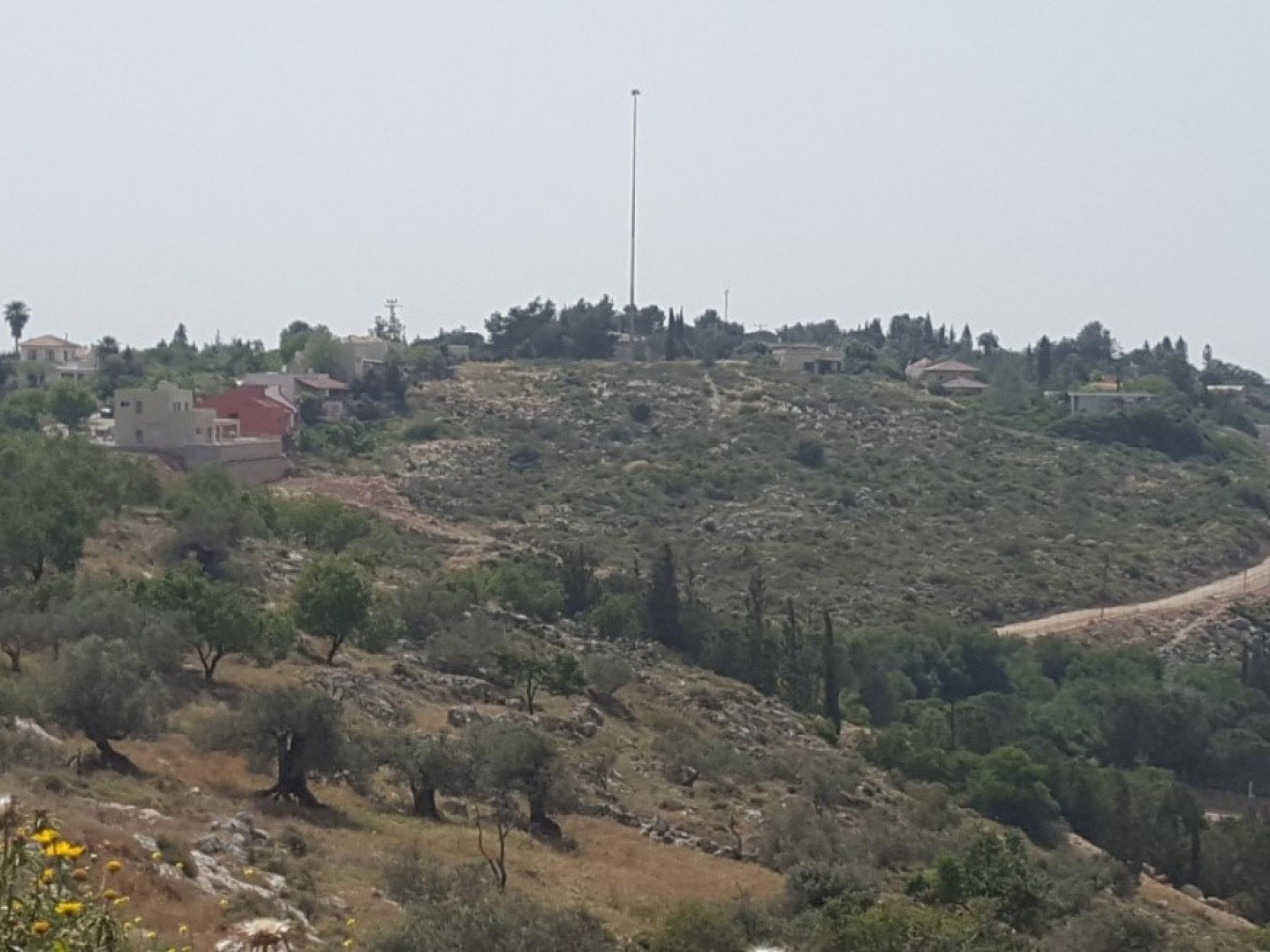 The green triangle on the upper right-hand side, G’s olive tree grove to which access has been blocked
Photographer:
Shoshi I