Want to work in Israel? – Get married! 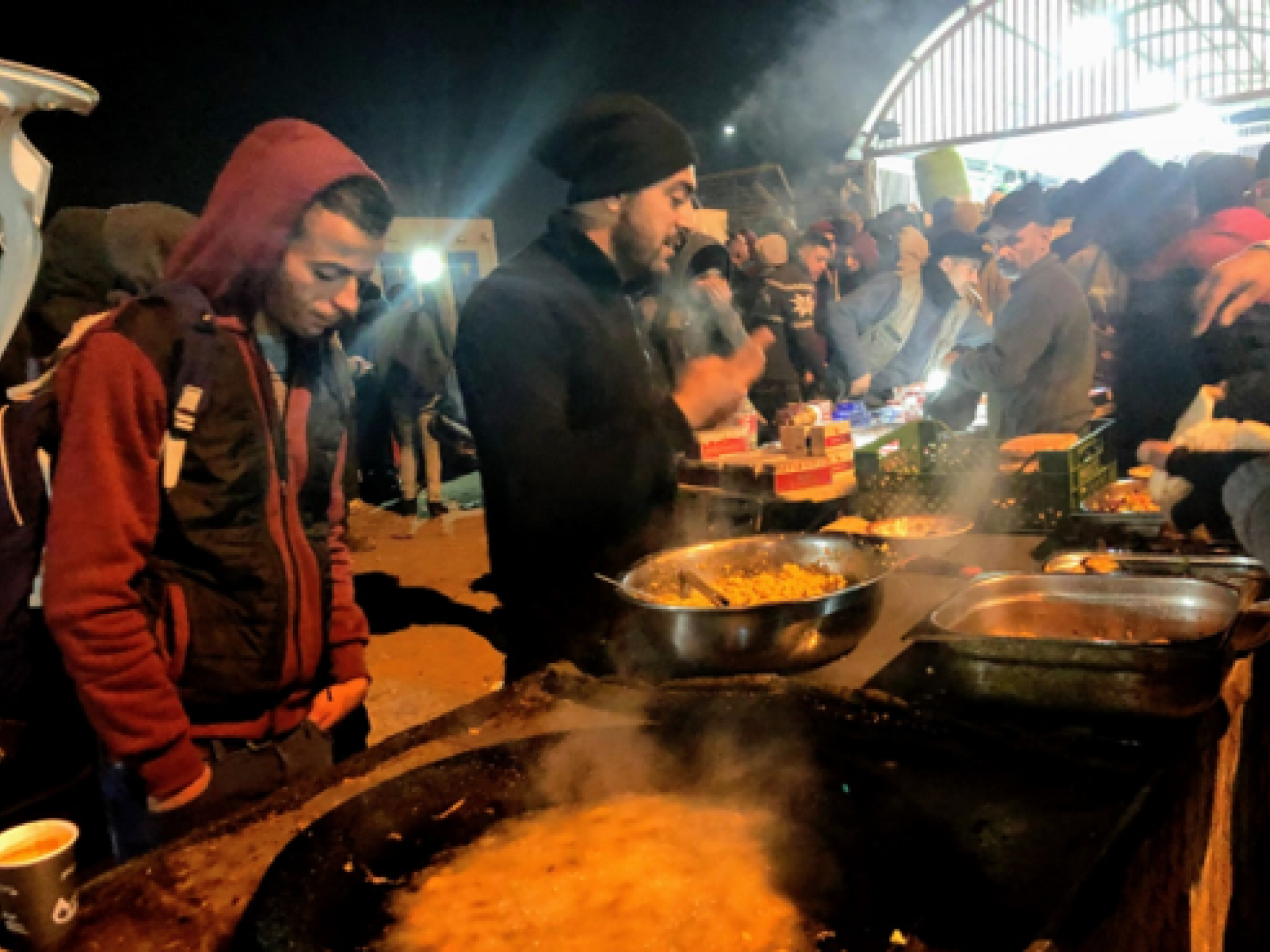 The market on the way to the checkpoint

Well, like a well-ordered person I set the alarm for 2:27 a.m. and this blended perfectly with my dreams. This is when tens of thousands of Palestinians get up or out of their homes on their daily trek to their workplaces.

4:05 Tarqumiya – a huge checkpoint, buzzing with activity, crowded with buses in the wares area, intricate car-parks, it’s hard to figure it all out for the first time. Everyone parked everywhere. So we parked.

The number of people crossing the checkpoint is as large as the checkpoint itself. According to the random Palestinian, we asked, about 20,000 workers come out of it on Sunday. On the other side, there are already many workers waiting for their rides. 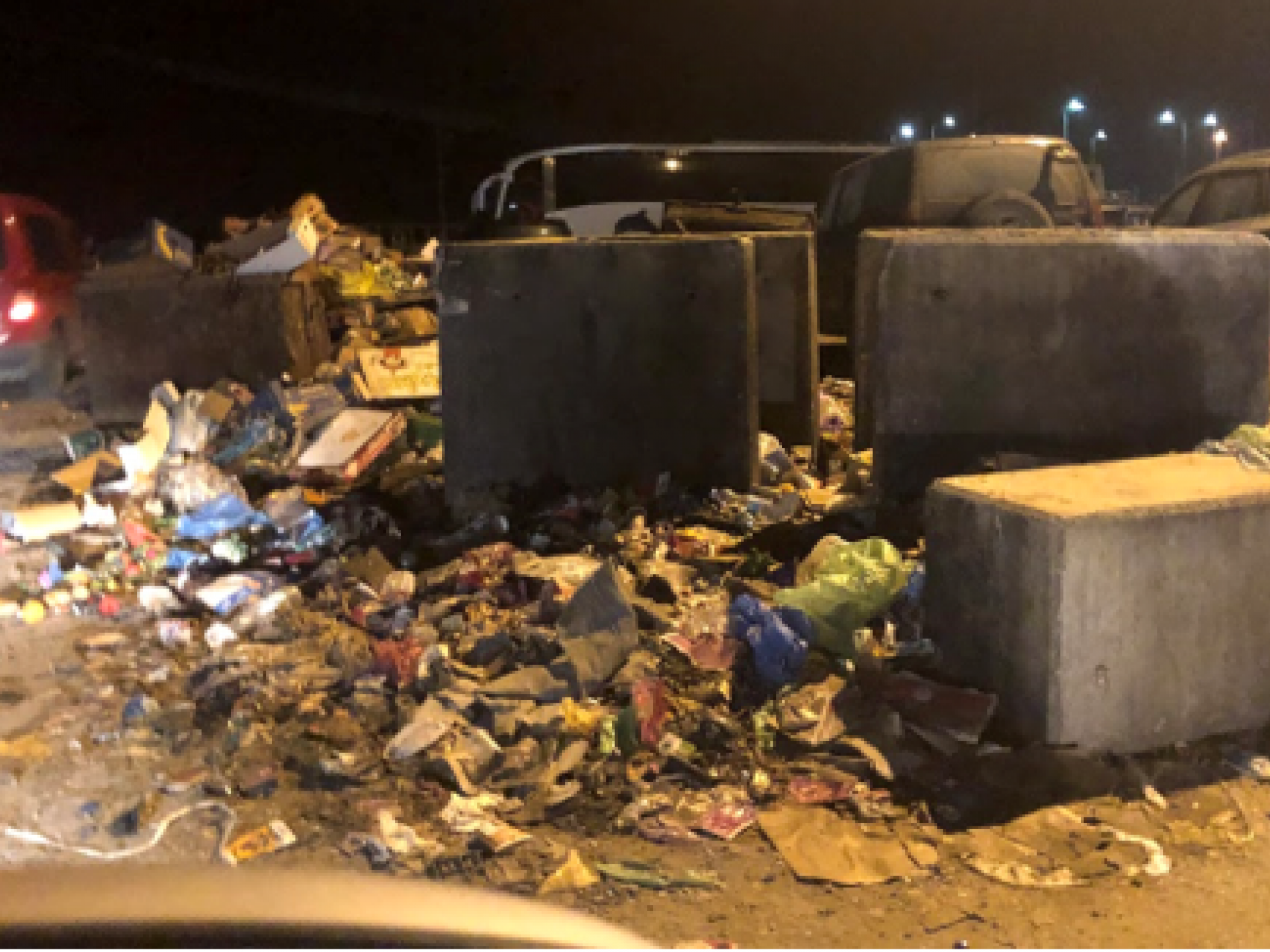 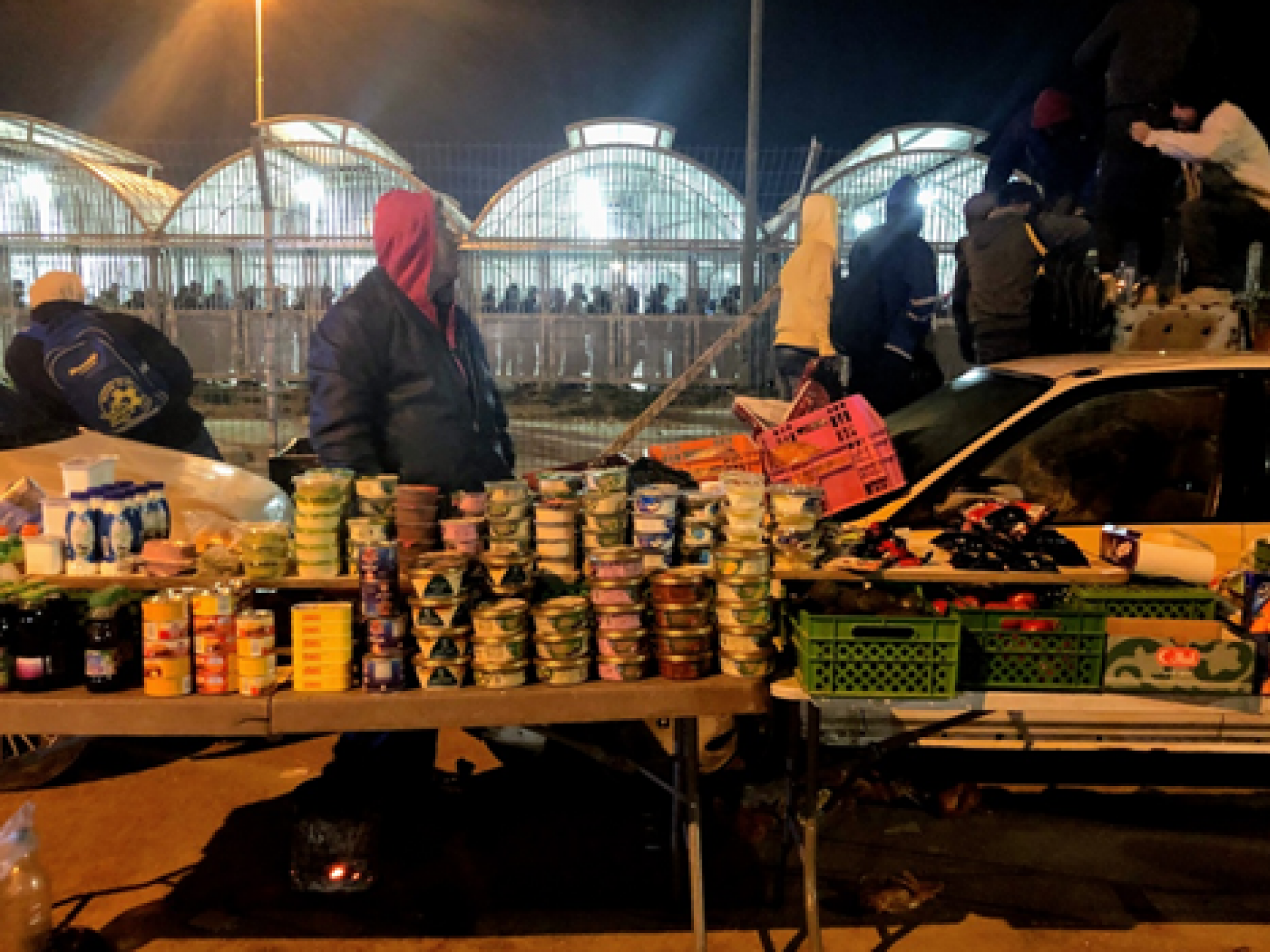 The grocery stand and the short-cutters

Since this is our first visit there (one hour by car from Ramat Aviv), we asked all the questions. The rides are only for the “Bedouins”. Large white cabs. 20 shekels will take one to Masmiya Junction. Larger sums are paid for rides to nearby cities.

Although we were not wearing our MW tags, our presence there drew attention and people were willing to share information.

It’s not different from any other checkpoint. Sunday is very crowded, including people who stay overnight inside Israel during the week. In the photo you can see youngsters cutting the way in shorter by climbing the fence, opening unseen gate inside the checkpoint, climbing on the roof and walking to the edge, a moment before falling, and jumping into a door that swallows them in without your understanding how it worked. Despite the pressure and all the talk of suffocation or trampling of whoever gets in at this time, everything works as by rote. 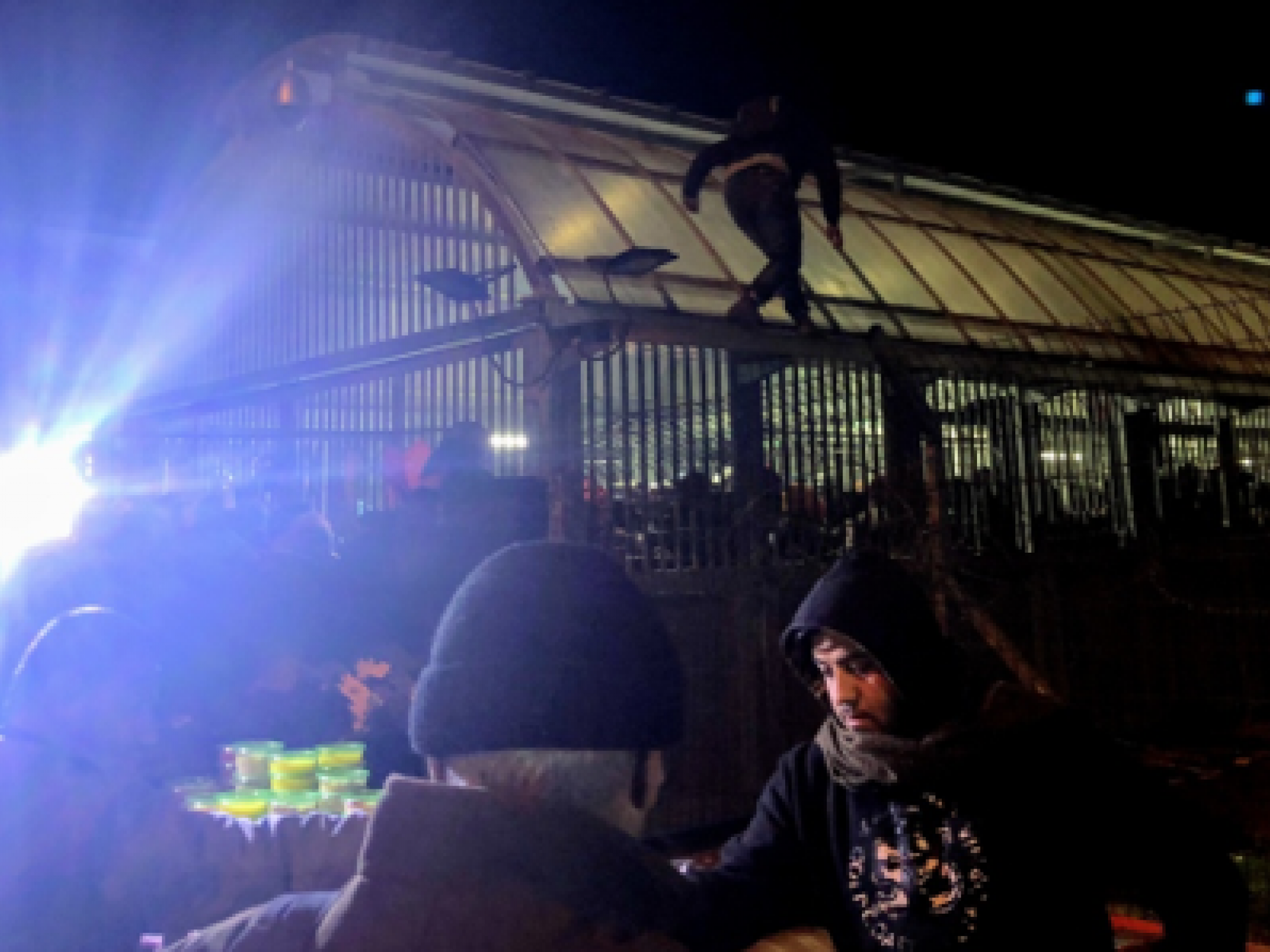 In the area around the entrance, a row of stands supplies anyone with anything: cigarettes, falafel, salads, bread, coffee etc.

A group of youngsters who did not wish to be trampled gave us the headline for this morning: young men get married early in order to be eligible for permits. Two brothers, 22 and 23 years old, are married. The one fathers a son, his wife 17-years old, and next to them are others. They question us, wanting to know where we come from and why, and ask about our website. They enter right away. Tell us how they learn Hebrew by a website, after saying “the fellow was innocent” in florid Hebrew. They tell us of their daily schedule that begins in the middle of the night and ends in the evening. Share some warm, soft falafel balls with us. They are willing to stand for a smiling group photo.

In a previous conversation that you might see in the video, Nurit took, an older worker, over 55 years of age, told us that he enters Israel without a permit because of his age, has been working as a farm laborer for years. He earns 20 shekels an hour. Far below the minimum wage, and does not complain because there is always someone who would replace him if he did. He smiles and tells the harsh story that is written here above and appears in different variations in all of our reports.  A friend standing next to him adds more of his own to the same. Mohammad – he is willing to speak and be photographed, but not to divulge his phone number. Sharing has its limits… He tells us about the Makam located near Bani Naim that he recalls from his childhood, where they used to visit and that used to serve them for religious ceremonies. Now they no longer dare to approach it for fear of the settler-colonists and the army, but they do tell their children about it. 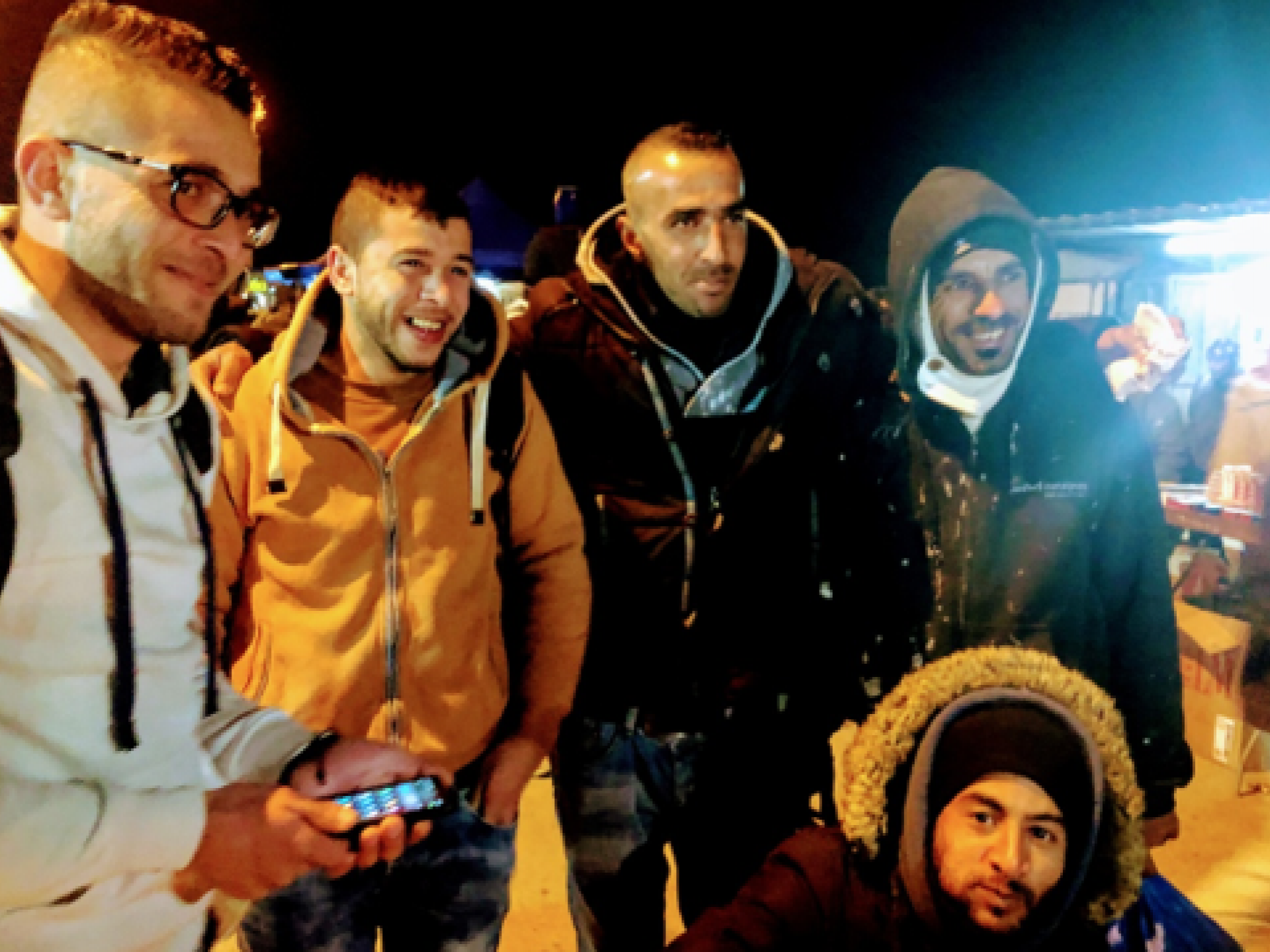 We hear about the fee paid for a work permit (2600-3000 shekels) from the young men entering the labor market. The older ones, fortunately, keep their regular job with their original employer.

Around 5 a.m. the waiting line is full to bursting especially in the entrance area. They say the line extends until about 9 a.m. They complain about the late opening time (4 a.m.) and their missing their ride as well as workdays.

The places from which the workers arrive: Tarqumiya, Yatta, Susya, Beit Ula, and Bani Naim – namely from the entire district. Some of them must take off at 2 or 2:30 a.m. in order to get to their workday.

While we leave for home around 5:45 a.m., workers are still arriving and the entrance of the checkpoint is still very crowded.