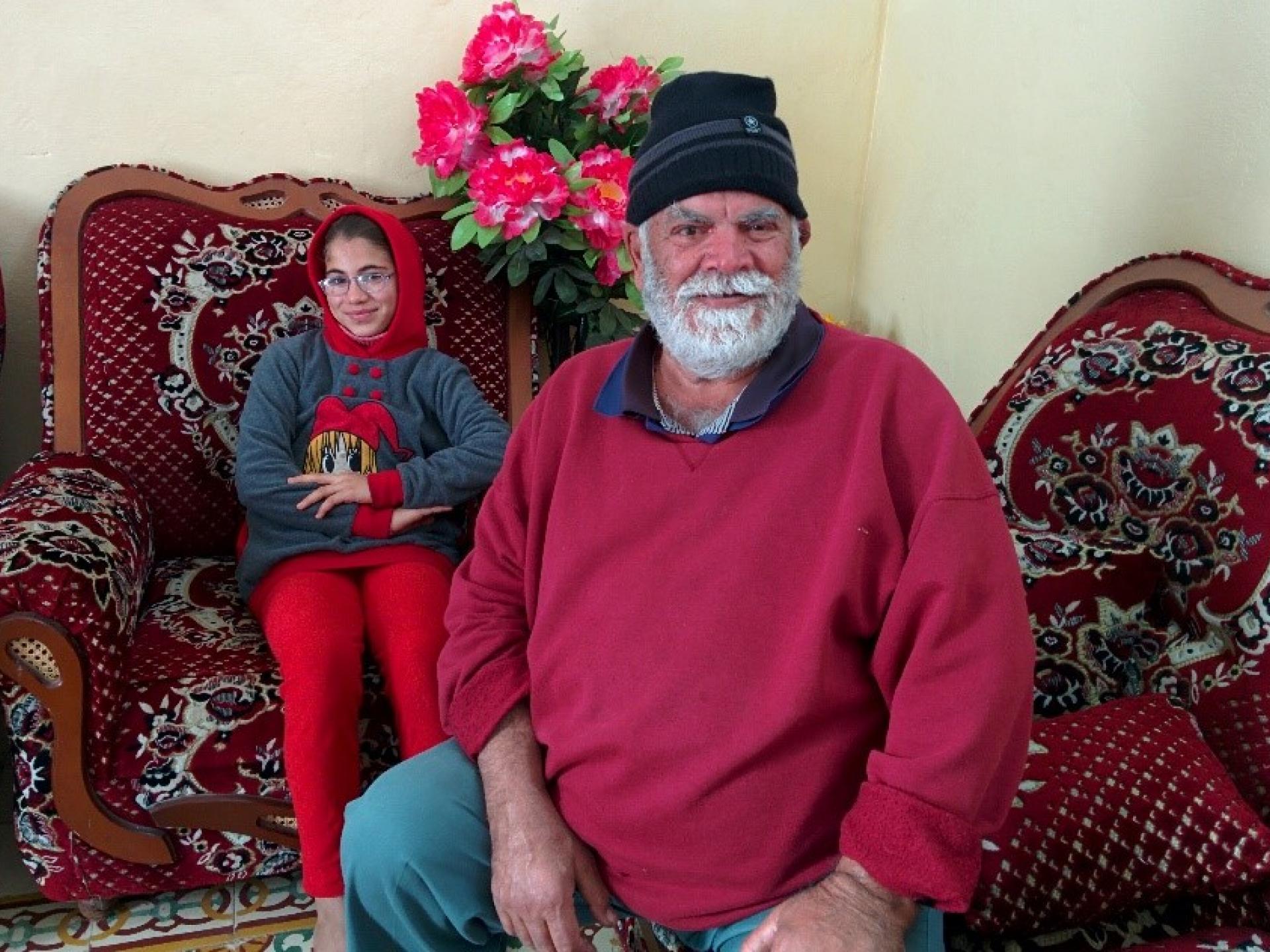 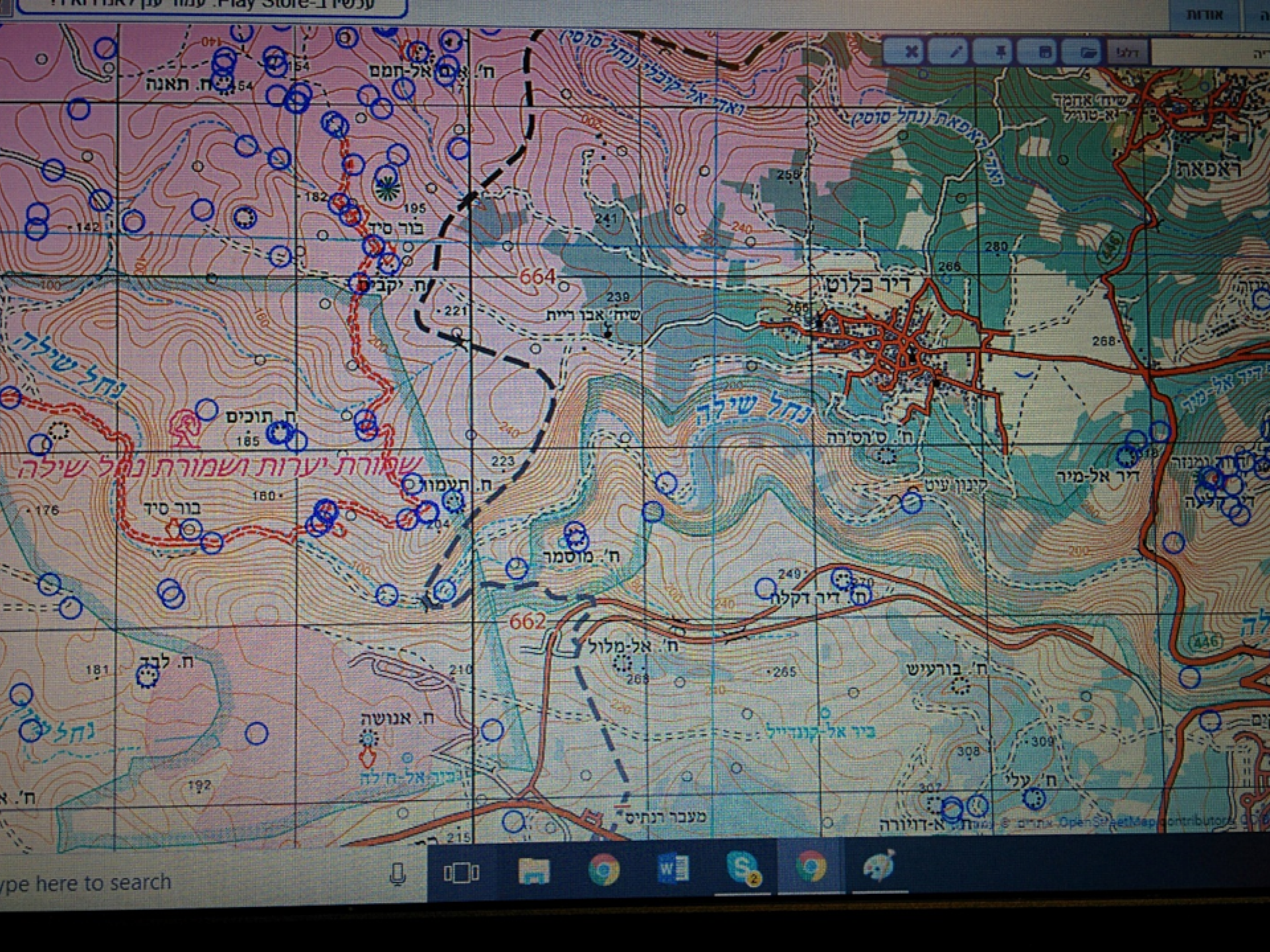 The map of Amud Anan: connecting point of the two reserves is visible
Photo:
Irit Segoli 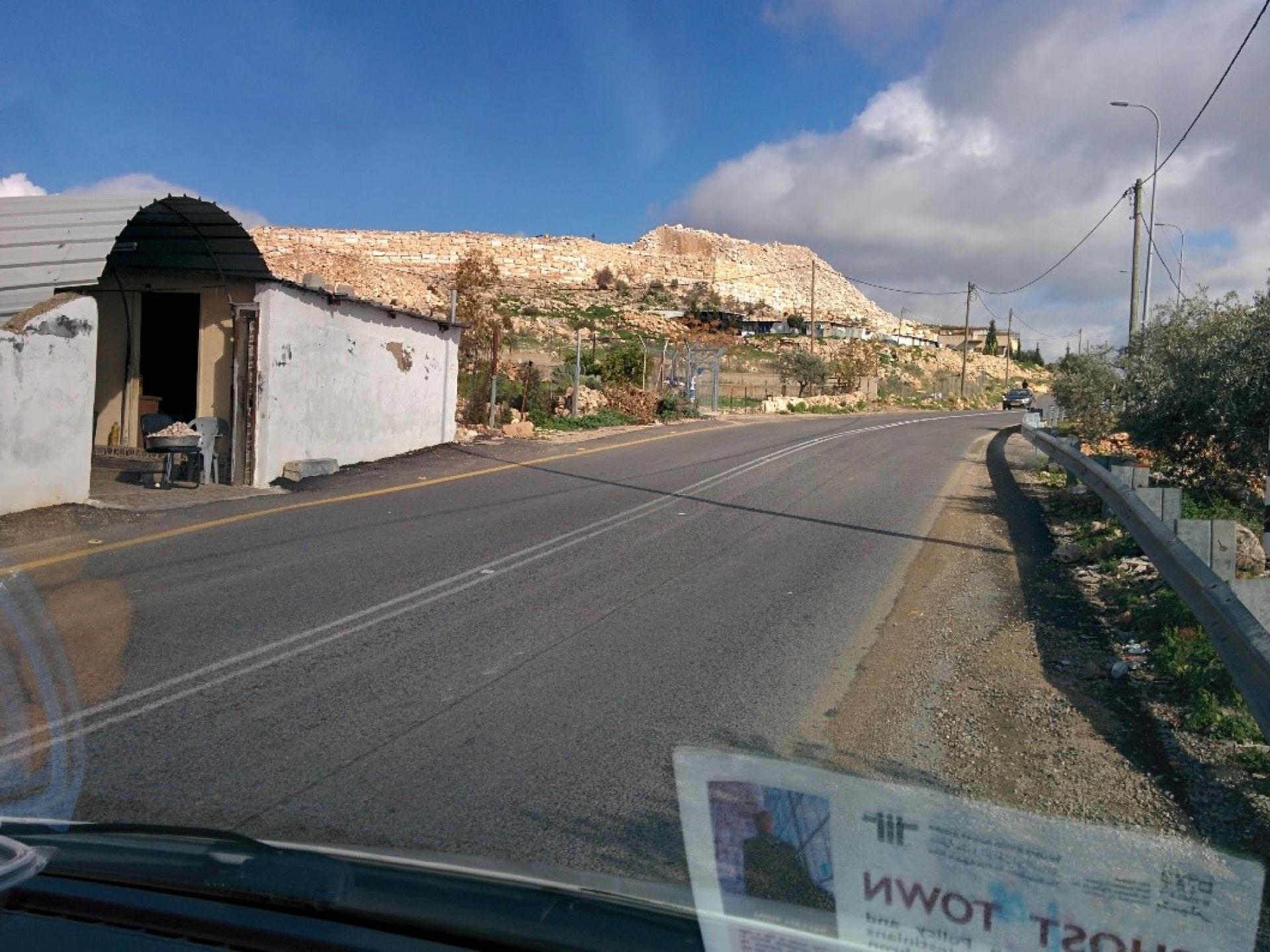 Road 446: the entrance to the family shop against the background of the Leshem Fort wall nearly completed
Photo:
Irit Segoli 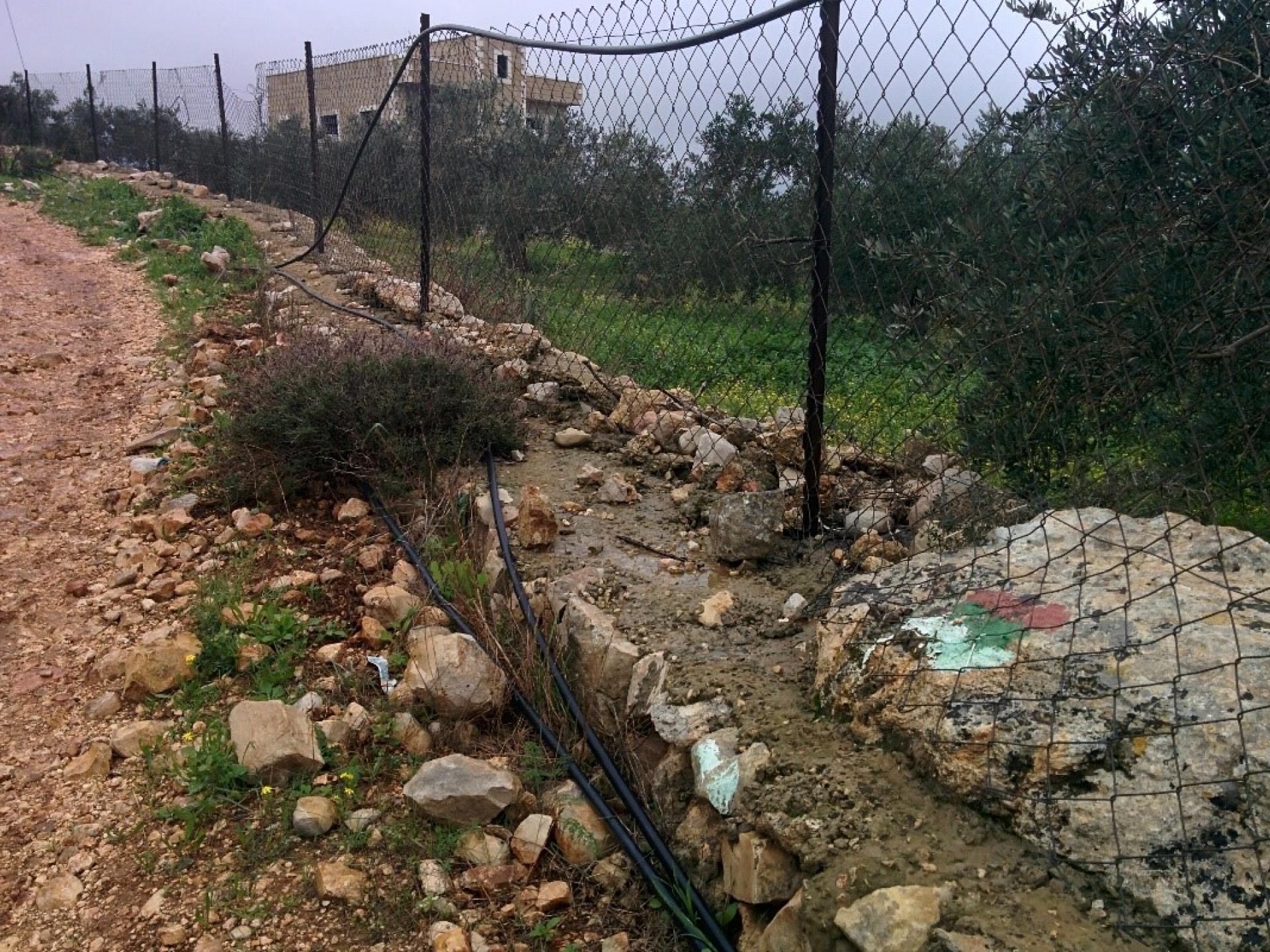 Marking the Israel Trail inside a private Palestinian fruit-tree grove next to its home at the village outskirts
Photo:
Irit Segoli

The nature reserve is designated all the way to the Green Line (internationally recognized border of the State of Israel since 1949) , where the forest reserve of Upper Shilo River is planned on its Israeli side – for the sake of contiguity! And a new road is planned between the settler-colony Beit Arie and the Green Line.

We wished to examine the legal possibility of demanding to grant exceptional status to “cultural” areas of the villagers so they be held outside the nature reserve. This reserve lies not only in Area C (total Israeli control) but also in Areas B and A (supposedly under partial or total Palestinian control and administration). Nowadays, not all of it is administered as a nature reserve, but when that happens, the Nature Reserves Authority inspectors will begin to enforce reserve laws just as is already the procedure in the Wadi Qana reserve.  This procedure greatly limits farming in the “nature reserve” area, in favor of the settler-colonies surrounding it: Beit Arie, Peduel, Alei Zahav and Leshem. And if the nature reserve contains an impressive archeological site, all the better. At present the entrance to the ancient site of Deir Qal’a is through a gate inside the settler-colony of Peduel. Judging by the uniqueness and impressive dimensions of this site, before long it will be turned into a national park.

The concept of nature reserve was new and strange for Idris of Deir Balut (Arabic for Oak Monastery), owner of the land on which the two Byzantine sites are situated – the enormous Deir Qal’a and Deir Mir. His olive trees are planted among them, above and inside them.  He hasn’t the faintest idea of the changes in their status that will be in force as soon as the entire nature reserve is administered as such. The borders of the reserves are not demarcated on the ground.  No signs. And the rules are taught by the inspectors and the Israeli military courts in the West Bank dcades after the reserve is declared as such (this one was already approved in 1992). However, its data as a nature reserve appear in Imanuel Hareuveni’s Guide to Israel’s Nature Reserves as early as 1985 (published by the Ministry of Defense). Presumably, they were made public immediately following the occupation, but why should anyone bother to inform the Palestinians of this? Another detail: The Arabic name of Shilo River is Wadi Deir Balut. A Muslim geographer mentions it in the 13th century C.E. (Vilnai, Judea and Samaria, 196?).

Our conversation with Idris was held in English with the help of his daughter G., who lived in the US for 20 years. She and her five children, born in Deir Balut, have an American passport. We met Idris last year when he was required to give up farmland as well as an internal traditional trail, for the sake of the settler-colony Leshem being built.l He was accused of “invasion”
(!!) and the affair ended badly. The area is colored blue on the maps, namely state land, and while his ownership papers were accepted by the first court, they were then rejected by the second one. (Leshem is a settler-colony with massive construction, matching the older settler-colony of Alei Zahav. (In between the two, a huge Byzantine ancient site, Deir Sam’an, is totally out of bounds for Palestinians, although its area belong to Pares of A-Diq village.)

At present, the only access 73-year old Idris has to his land is on foot, and entails climbing steep terrain. This year he hired people to harvest the olives in his stead. His access with farm machinery is blocked by the settler-colony Peduel. His daughter G. spoke of a survival struggle that becomes more difficult day by day. She has five children and a husband who is unemployed because of back pain, of which she too suffers after five Caesarean sections. She farms, work that at least in the summertime does contribute to their livelihood. The farmland she tends grows cucumbers and other vegetables, but is close to the house in an area that is entirely inside Area C, so she is very concerned that it too will be taken from them.

She opened with a story about a loose black dog that barks at the Palestinians, scares and threatens them. She says it lives in the army pillbox post at the Deir Balut-Beit Arie junction situated 100 meters from their house. Of sheer fright at his barking, her 11-year old daughter fell and hurt her leg. Now the girl refuses to walk to school in the village, a 30-40 minute walk. G. approached the village council about the matter but to no avail. (Idris and we presumed the dog belongs to one of the soldiers who brings it with him there when he is on duty at the pillbox).

We went to see what this was all about. When it saw us photographing, it tucked its tail and seemed a poor frightened creature…

The second problem G. raised was the reduction in the family’s UNWRA aid. In October 2017 she was informed that the supplies at the time were the last to be provided. The supplies include soy oil, flour, chickpeas and salt. Four months’ supplies would cost 750-800 shekels. Furthermore, UNWRA provides them health insurance to a certain extent. All this was in effect even prior to Trump’s announcement that the US would cut its UNWRA budget, and she is very worried.

The first question we were asked by S., the grocer in the village, was whether we had come from Nabi Salah. We didn’t understand why, and she explained that if the checkpoint at Nabi Salah was closed, which as everyone knows happens very often, then the two adjacent villages Deir Ghasana and Beit Rima (with a joint council) are closed as well. In order to get to Ramallah, instead of driving south and through Nabi Salah, they must go north and do a huge roundabout through A-Diq village. And no one informs the Deir Ghasana villagers when the Nabi Salah Checkpoint is closed and opened.

The economic situation there is dire. Her grocery is “dried up”. No one comes in, no one buys anything. After we bought lots of fine dates for ourselves and for Idris, whom we planned to visit later that day, we asked about the way to the two maqams: Sheikh A-Rafi and Rijil Su’afa (she said one of them is called Al Mjdoub), and whether the villagers spend time around them? Yes, she answered, the villagers have picnics there, access is open. Deir Ghasana is one of the 24 throne villages in the West Bank, and is known for its many double-domed maqams. So in spite of the rain, we made the effort to reach the two maqams marked on the nature reserve map and situated right on the “Israel Trail”.

With Mustafa we entered a dirt track winding inside the nature reserve until a huge puddle made it impossible for a normal vehicle (not SUV) to continue, so we trekked through mud and marvelous landscapes. When clouds closed in and the rain began to pour we turned back and couldn’t make it to the maqams themselves. 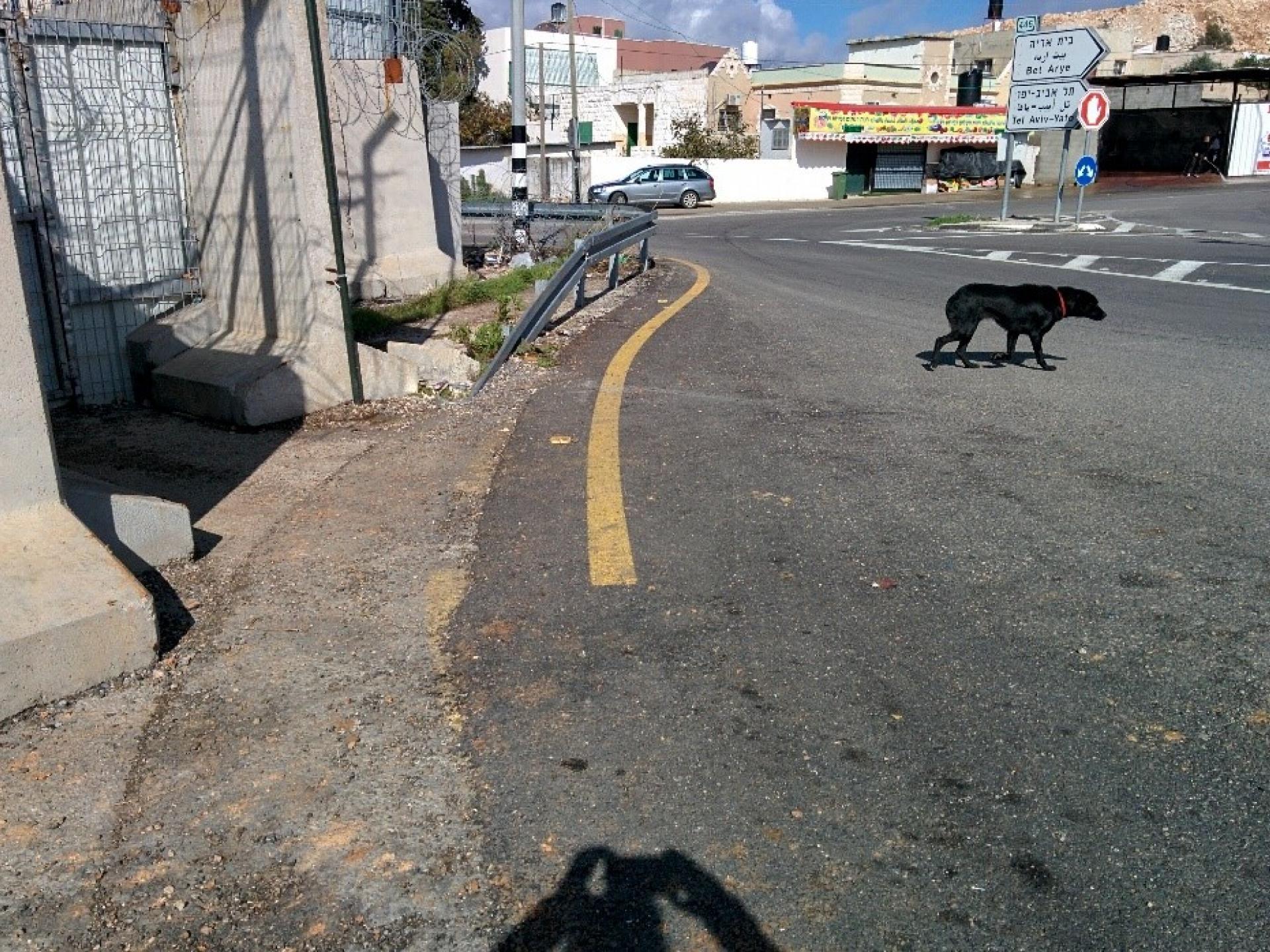