Everything seems to be routine.

Along road 60 all the barricades are open except for Dir Razih where the entrance is still blocked. Nothing out of the ordinary is seen.

There are many children in the streets as it is still school holidays.

Judy is surprised to see the new signs in the Shuhada street with the posts telling of the history of the place and that it is a  like a ghost street. A good time to remind people what is looks like. 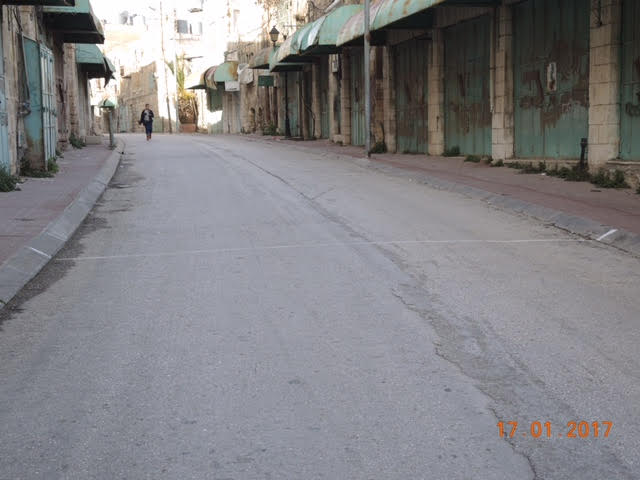 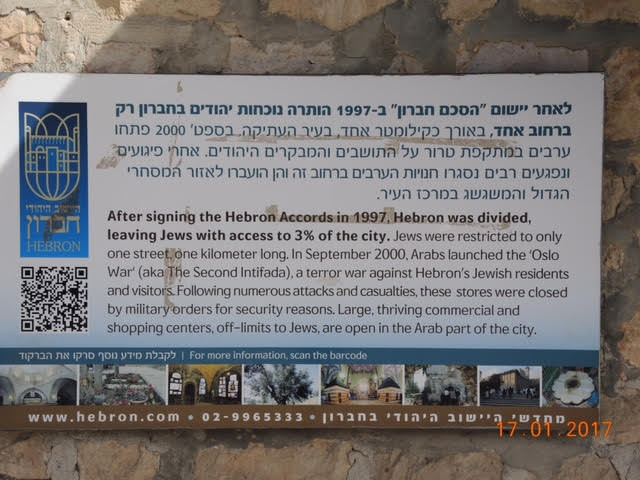 In the area before the Hadassah street only four families are left. The balconies are behing bars because of the violence of the settlers and their children. We stopped and were again shocked to see  the balcony of Z. with the sign:

Caution: This was taken by Israel you are entering apartheid 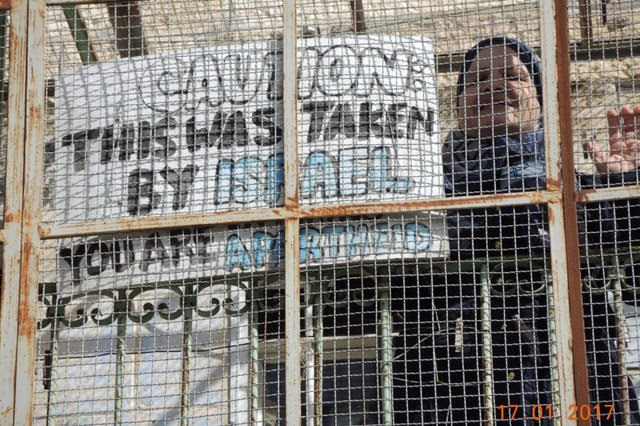 She saw us and agreed to be photographed next to it as one can see from the photo. She draws our attention to a new barbed wire fence on the top of the Muslim cemetery which is opposite her house on the other side of the road. She said she photographed the erection of the fence some days ago and was cursed by the soldiers with words which she did not want to repeat except for their shouts…”Die , die” 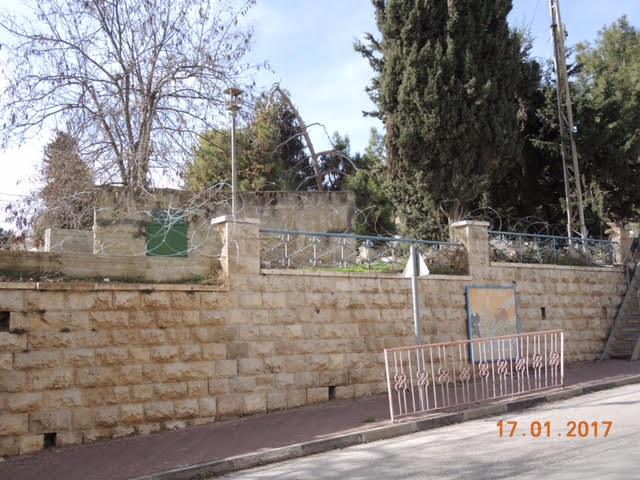 She reminds us that she cannot leave her house to visit her relations which would take her two minutes, but has to go into the Kasbah and from there make a long circuit to get to the Tarpat checkpoint or Tel Rumeida and thus walk for 45 minutes to get to them

We went to visit W. and Z. who live opposite Beit Hadassah. The stories of their life are always hard to stomach. They say only about 20 families are left in the area. This time they showed us the numbers (yes, yes, numbers) they put on their IDs, which they have to show when entering or leaving their homes in H1 to H2 and every month the numbers are changed.

M. asks: The families of prisoners are permitted to see the prisoners once a week. The families living in H1 are not permitted at all to visit us. No one can understand our lives here until they spend at least one night with us. He tells of a religious journalist who came to “the life of Sarah” decided to spend a night with Arabs.

At the end of the night the night he said to them that everything was in order and that they had nothing to worry about. When he left their home settlers fell on him and began to beat him. He lifted his shirt and showed them his Tzitzit (small four-cornered garment worn by religious Jews). They immediately desisted and apologized. He carried on walking and then the soldiers fell on him and began with an aggressive questioning. Quickly he pulled out his journalist card. They quickly moved away and also apologized. When the journalist returned in shock to their home, his hosts asked him, “Now do you understand what it is to live here?”

In the road next to their home one see a white line which is slightly erased. Until a month ago they were not allowed to cross it to go to the checkpoint of Tarpat and had to visit their relations by going over the roofs. Yes, you heard correctly.

They ask for games and a computer for the kindergarten.

How long do you think it takes for an ambulance to take anyone wounded or sick from our area to the hospital which is 500 metres away? they ask us.

There is no day that there is not a disturbance between the soldiers and the settlers. I invited journalists to come and record and photograph the multiple horrors which these people can tell of.

Our friends are invited to visit and to listen and to record. Time is too short to tell all. People are desperate that their voices be heard.