Beta: "We will not give up even if there is no living soul left" | Machsomwatch
Skip to main content
Back to reports search page

Beta: "We will not give up even if there is no living soul left" 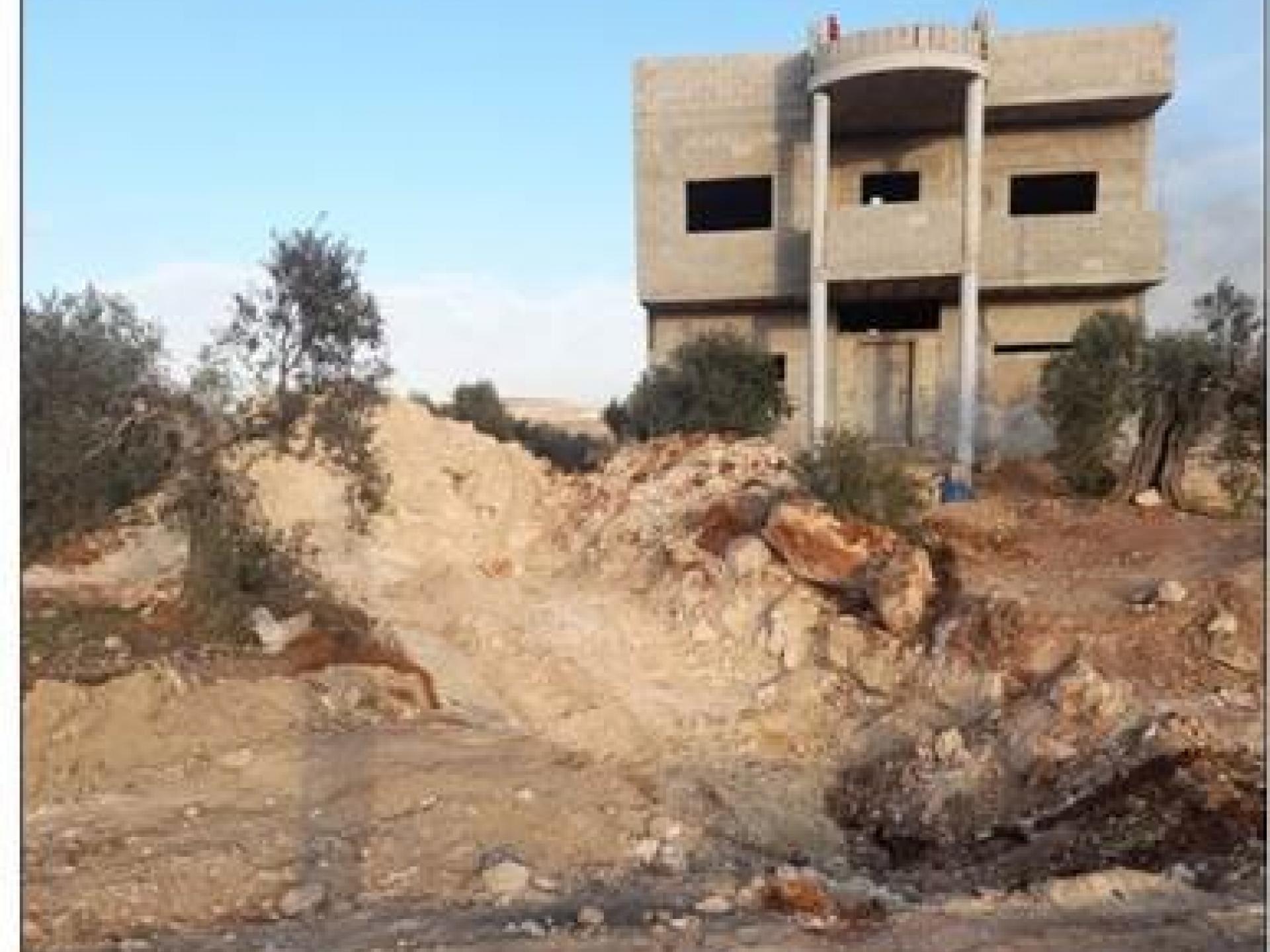 Beta: A house on a cessation of construction that was blocked by the army 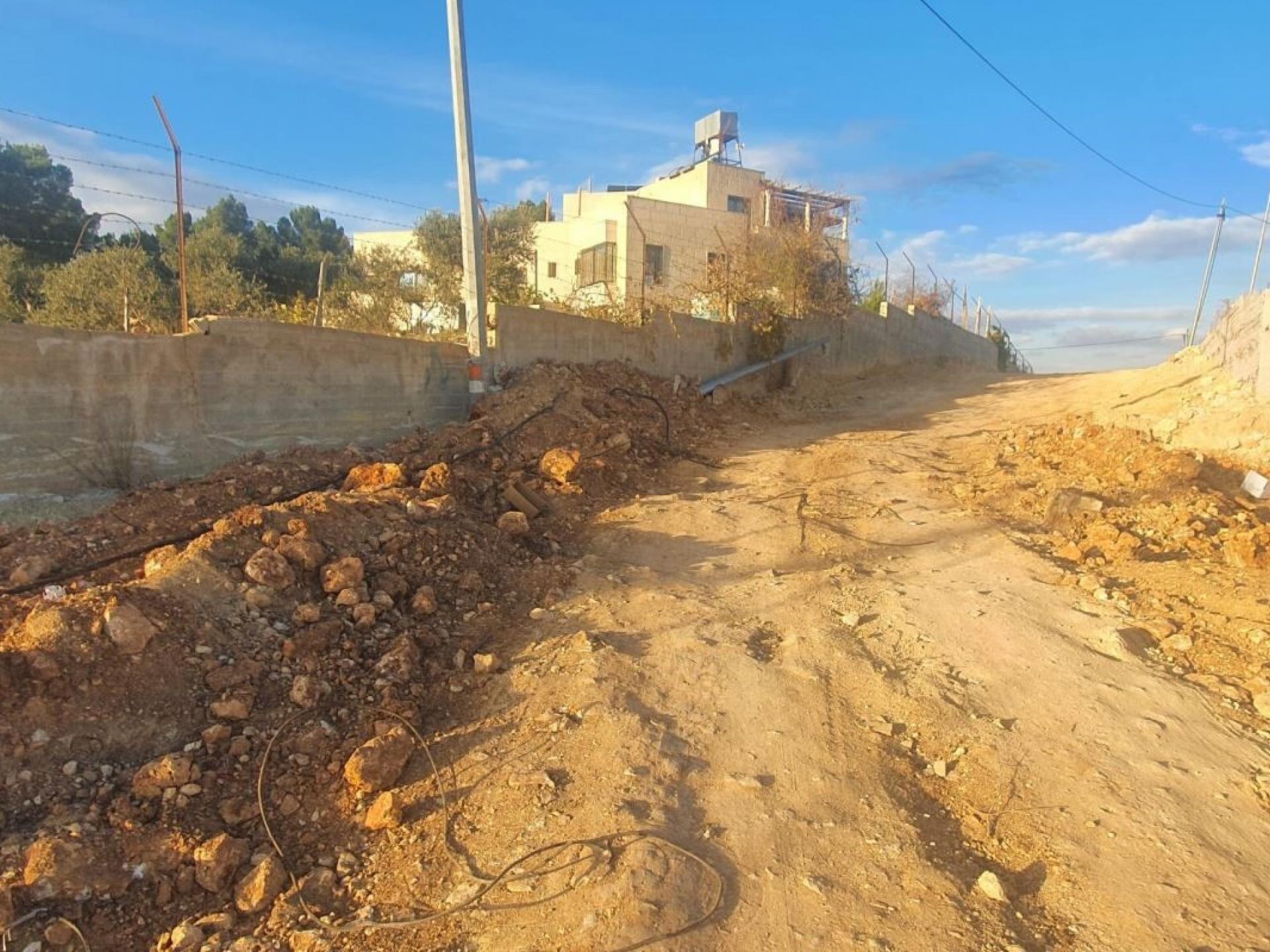 Beta: The army has blocked entrances to a house inhabited only by women 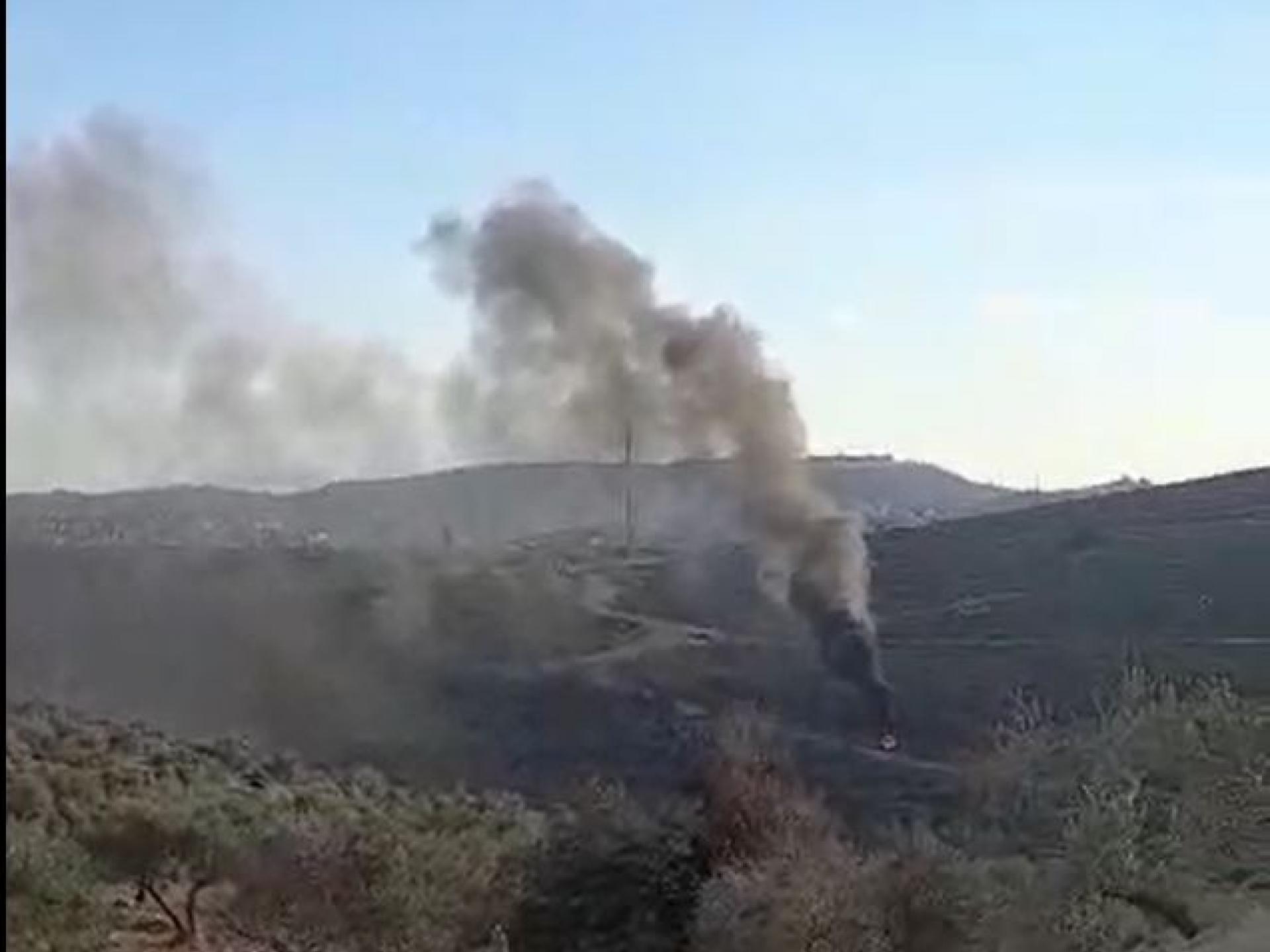 Beta: Smoke rises from tires ignited by protesters in front of Eviatar outpost 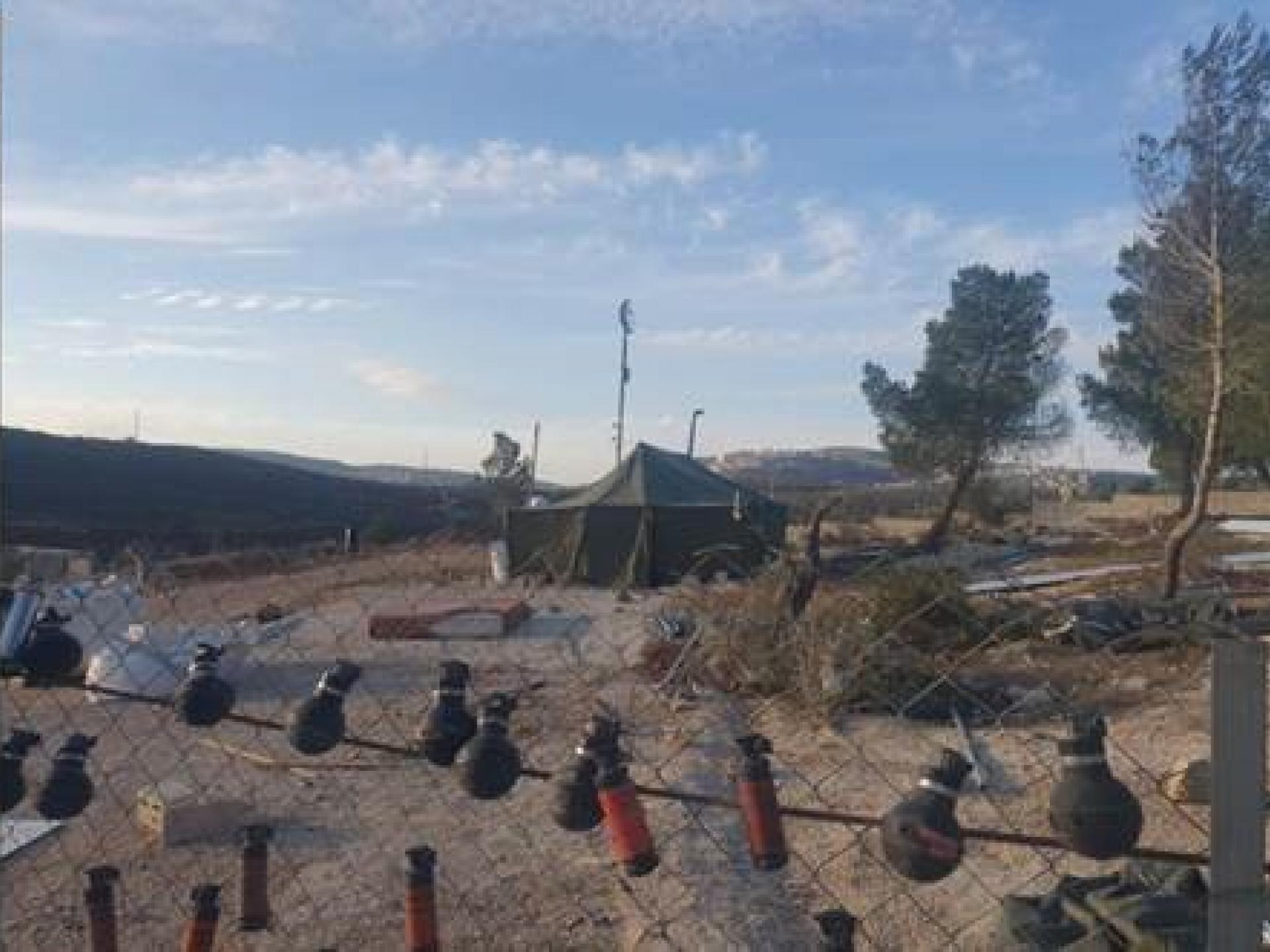 Beta: A protest tent and an exhibition of grenades and shell casings of bullets fired at them 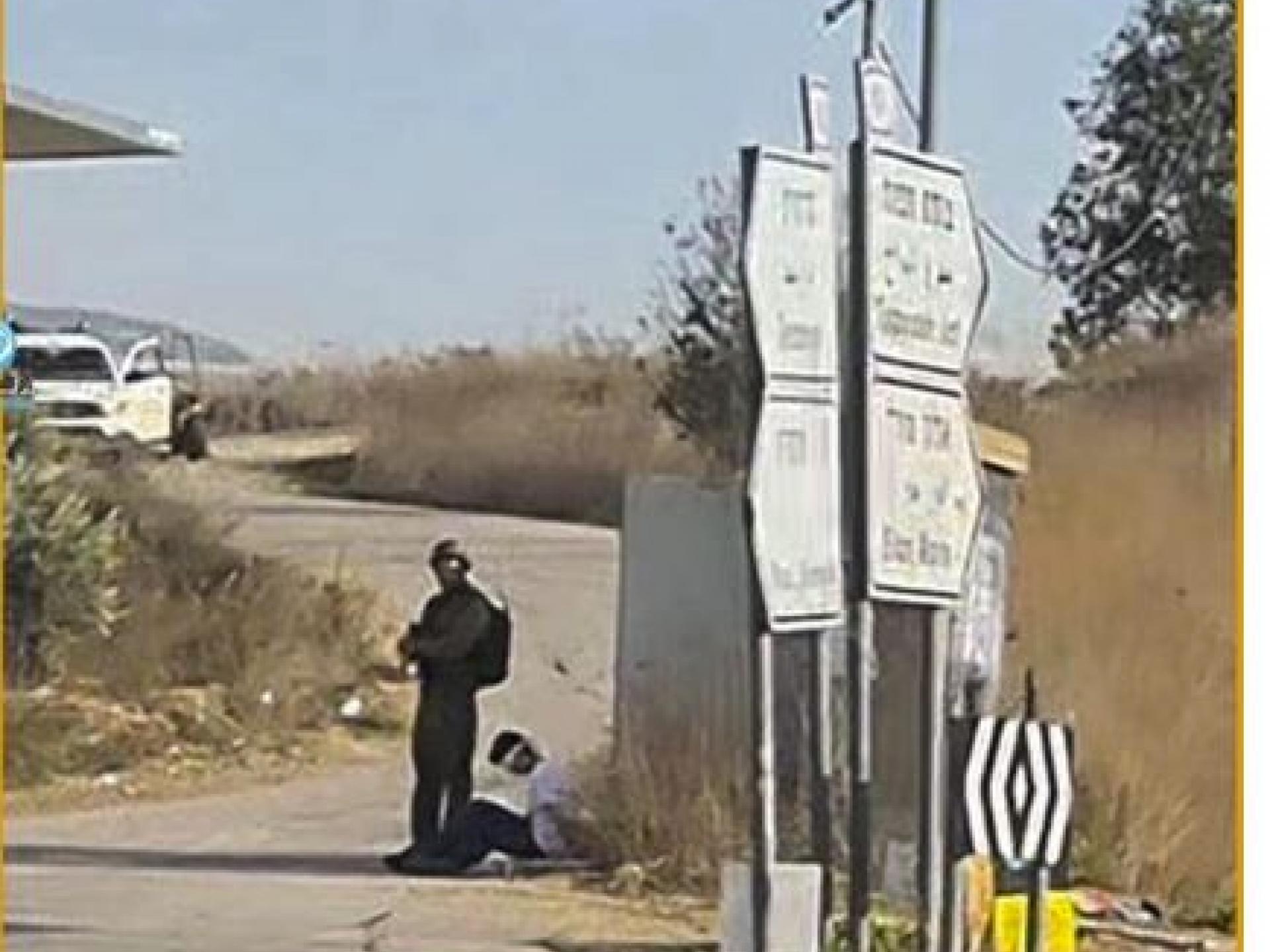 A 13-year-old student from Burin is arrested, handcuffed and his eyes are covered

Several military posts have been erected on the Yitzhar-Huwwara road.

The military post in Bourin village is located on a hill opposite the schoolhouse, and is manned by soldiers and settler-colonists. A week ago, soldier with settler-colonists entered the school, a settler-colonist grabbed one of the school children – 13-year-old Ahmad Nasser – and gave him over to the soldiers. These tied the child’s hands and legs and blindfolded him. He began to scream and his pals went wild. Eventually he was released but is still traumatized and refuses to go back to school.

The works on the Huwwara bypass road are ongoing. The road parallels the main Huwwara road on 400 dunams of lands belonging to Huwwara, Beita and Yatma.

We went to the Beita local council although this was not coordinated in advance. The municipality building was closed. A young man from the nearby grocery store called the mayor, who welcomed us gladly and told us what was happening in the area of Mount Sabih, on the highest top of which Evyatar – the illegal settler-colonist outpost – has been erected. On the hill opposite Evyatar, young Palestinians have erected a tent and spend 24 hours a day inside, taking turns. The Moutn Sabih lands belong to Beita and Yatma villagers, and their owners have papers confirming this from the Civil Administration, but they are forbidden to enter them. They have turned to the Israel Supreme Court that ruled that it is not yet time to survey the land in order to establish whether this is ‘state land’ or land that belongs to its owners. This, in spite of the fact that until 1994 they had been tended.

Every Friday, numerous Beita villagers climb up the hill and demonstrate there in protest along with other villagers. Border Police forces and soldiers arrive to disperse these protests and confront the demonstrators, hurling teargas and stun grenades at them, as well as rubber-coated steel pellets and live ammunition.
On a fence around their protest tent, the youngsters have displayed an exhibition of 22mm caliber shells and teargas grenade casings.
As of today, they have suffered 700 wounded and 10 killed casualties.

The Israeli army has disrupted and destroyed tracks leading up the hill in order to disrupt life there and especially to prevent ambulances from evacuating the wounded. By and by tracks and entrances to houses in Beita, close to the mountain and to the protest tent – have been closed off. In one of the houses inhabited only by women, all entrances have been blocked after it was discovered that ambulances go through their yard.

16:30 Driving down towards the exit from Beita we were surprised to see soldiers arriving in 4 jeeps, getting ready to deny entrance to the village. Upon arriving in Huwwara we saw three jeeps parked about 200 meters from each other, and soldiers standing at the ready with their rifles.

As we took leave of the mayor he said – “We’ll not give in even if not a living soul remains”.

Beta is a town of 12,000 people, high unemployment rate. Many work in Israel, others in agriculture. Neat ornamental system. Unemployment is high. Young people, even the educated, are forced to look for work in Israel. Medical services are available once a week.
Settlers from Yitzhar and Itamar harass residents frequently and prevent them from cultivating their fields: Permits are required from the DCO to go to work.