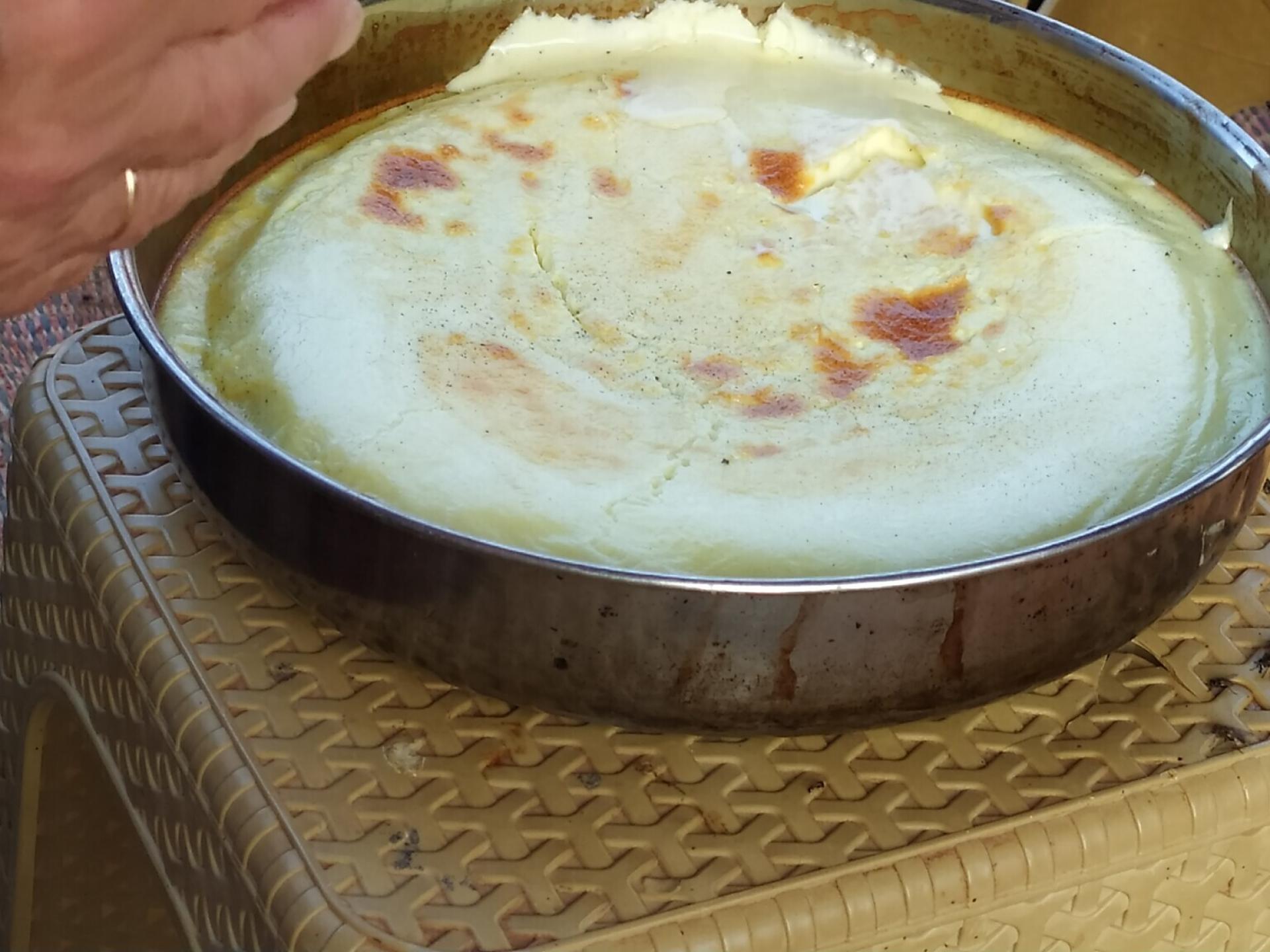 We began with a visit to one of the western shepherd communities at Ras Al Ahmar – the Odeh family. The father, mother and two sons welcomed us warmly. Their daughter studies 3rd year nursing at the American University at Jenin and will be back only in the evening. The tent is poor, a shed sewn from torn coffee sacks decorates the entrance, with an iron bed for the guests’ comfort. But with all this poverty, alongside the entrance are tins with a whole selection of potted plants, some climbing up the sheets of the tent, adding color and beauty. Obviously, this family grooms its surroundings.

From the oven, the son brings a tray with a pastry made of colostrum (primal milk) that the goat has right after birthing. Now is the birthing season and there is a lot of colostrum around, more than the kids can drink. So the mother prepares a daily pie from it, called ilba, which they eat the next morning. We received today tomorrow’s pie… It’s considered very good nutrition for the kids (and they think – for people too) and strengthens them in their first days here. The pastry is pretty tasteless, needs some sugar.

The ‘Atuf valley below Ras Al Ahmar is very fertile, irrigated with water coming from the PA through pipes from ‘Atuf village. Ras Al Ahmar is the hilly area north of the fertile valley – the Baq’a. We continued to the next family, passing along fields with cabbage, kohlrabi, onion and pepper plants – everything green, delighting the eye.

We didn’t remember where exactly to look for the home of Alian and Rouida, of the Odeh family, since we hadn’t visited there for over two years. In the past we visited them after the Israeli army demolished their home and they remained without shelter in the seething sun. We also understood then that the two girls (18 and 20) want to study at the university and decided to help them. We gathered enough donations to finance the first semester, and even got hold of a laptop for the student. But her father was not happy with the idea that his daughter would study, and immediately found her a bridegroom from the neighboring village ‘Atuf, who even has a stone house. After deliberations, the daughter gave in and married, while her sister also decided to give up the study dream, for it’s not the same alone. We were very troubled, but that’s how life is. Here too food was immediately provided to go along with the tea – cheese, olive oil and taboun-baked flatbread.

Direct broadcast from Khalat Makhoul on Zoom (from the activists of the Jordan Valley Coalition) about the state of water in the Palestinian Jordan Valley.

Evening was up upon us when we left Ras Al Ahmar on our way to Khalat Makhoul, to Burhan. On our way we visited Yusef and Najia (who was arrested a few weeks ago on the claim that she had thrown a stone at the car of settler-colonist Menachem from the outpost near Hemdat settler-colony). Hagar brought along books which she gave out to the children who happily sat down to read or just leaf through them (the smaller children). The baby

was tired and cried. In spite of begging us to stay, we continued to Burhan’s.

The Jordan Valley Coalition organized a Zoom meeting for 8 p.m. about the state of water in the Jordan Valley, anticipating the action of restoring and clearing water holes. We stayed in order to enable Burham to connect to Zoom and tell about his life without water, for he is not even allowed to fill the water holes with rain water, by the laws of occupation. Daphne gave a review of the state or lack of water for the Palestinians in this area.

At 5 p.m. the family was already tired. Their life runs on daylight, and now was already dark. Of all their children, only the small daughter was present. With proper schools lacking in the area, all the family’s children live in a ruin in Tamoun during the week, with the older girls looking after little Ahmad (1st grade), and the other girls who attend school. Only on weekends do the children get to be hugged by their parents.