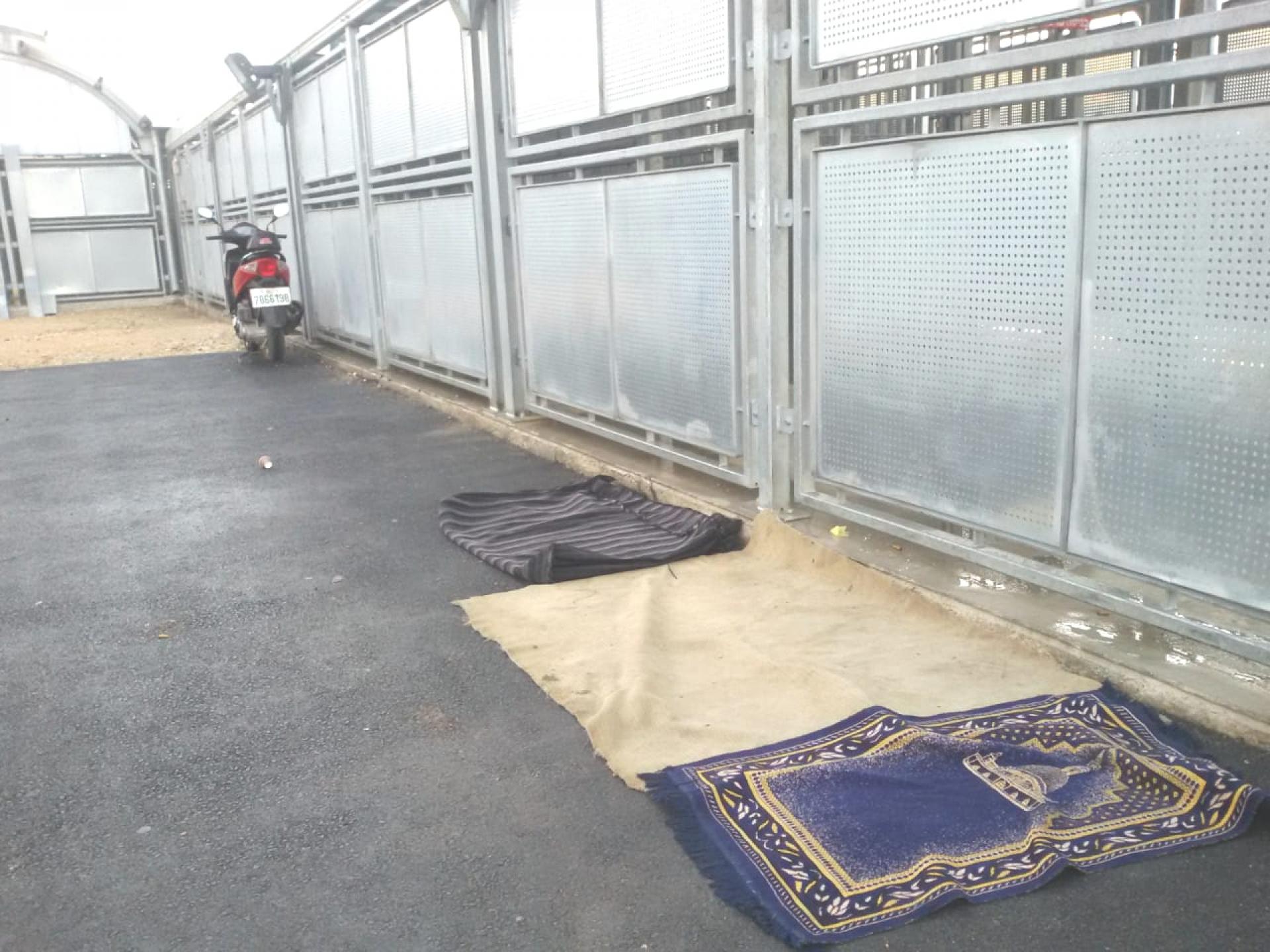 Many workers were waiting for their rides to work on the side of the road on the seamline zone side of the checkpoint.   We crossed to the Palestinian side where the parking lot was practically empty.  Workers were arriving at the new shed by car and on foot and entering the terminal that is on the other side of the security road.  People were entering constantly but it was not crowded and there was no waiting line.  A young man parked a red motor scooter by the side of the shed, and others unrolled prayer rugs that were soaking wet from the rain that had fallen during the night.   One of the drivers translated the request of a man who had suddenly been prevented from entering Israel.  We gave him a card with Sylvia’s phone number.  The driver has twelve children – nine suns and three daughters – and we gave him twelve bags of used clothing that we had brought.   By the time we went back up to the seamline zone side there were already fewer workers waiting for rides.

People were already walking to work in the seamline zone and a few cars were also crossing.  A person told us that today everything was “going well” and that there was a soldier in the inspection booth who was “really OK” who was letting people through quickly.  Even one soldier cannot change the occupation, but can change people’s attitudes.  It’s a shame that the area around the checkpoint is so dirty.   We didn’t wait for the schoolchildren to cross, but drove to the Shahak Industrial zone in the seamline zone.

(Translator’s note: Shahak is a Hebrew acronym for shin, het, and kof –the first letters of Shaked, Hinanit, and Katzir - the two settlements in the area plus one that is within the green line Katsir.  We don’t understand why Katzir has been included the two settlements that are in the seamline zone.

There was a guard at the gate who did not stop us, and there was an attractive sign with directions to the various factories in the industrial area.  We drove around the well-tended industrial park until we reached “Tiretech” – the factory for recycling tires.  People had previously complained about the noise emitted from the factory.  (See report from 24.10.2018).  All was clean and quiet.  There were cars with Israeli and Palestinian license plates in the parking lot.   Tami remarked that a shared working place could be extremely pleasant after the occupation ends.

07:40 – When we left an unpleasant person stopped us and told us that we should leave and that we had no business in the industrial zone.