05.20.  When we arrived, it was too dark and crowded to walk down the new corridor to the road, to check on the length of the queues.  However, we noticed in the shed that the beigel seller was not at his usual post. Later, when it was light enough and less crowded, we did go outside and found him midway  in the corridor, with many of his beigels still unsold.  He told us that when he arrived at 4.30, the crowd was such that he could not make his way in!

The situation inside the three lines in the shed was ‘reasonable.’ The soldier opened the turnstiles frequently,  although for too short times, in our opinion.

05.56.Things really looked promising when the D.C.O. officer arrived so early (even before the 6 a.m. official opening time!), accompanied by a policeman and the soldier who was to relieve the one working the turnstiles.  After a few minutes of photographing and settling in, she opened the humanitarian gate and kept it open for a steady trickle of people. (Nowadays, it seems, the gate itself can be left open while its turnstile can be controlled from within the aquarium, and part of the time today the D.C.O. officer stayed inside.)

However, at 7 o’clock, the officer and policeman left.  A guard who had just joined them – and he is one who frequently manages the humanitarian gate on his own  – also left, heading towards the checking stations. We thought he would return but he did not.  A few minutes later, a man came with a little boy, and after that a couple with a baby

in arms.  We phoned the D.C.O. office to ask for help.  A short while afterwards the soldier came out of the aquarium to tell us that the D.C.O. had called to say they could not help and that the people should join the normal queue.  Fortunately, conditions were calm enough today for people generously to allow these folk to fit in at the entrance to the nearest cage.

But later, first one, and then another woman arrived in a wheelchair (and the woman accompanying one of them also had a large suitcase). 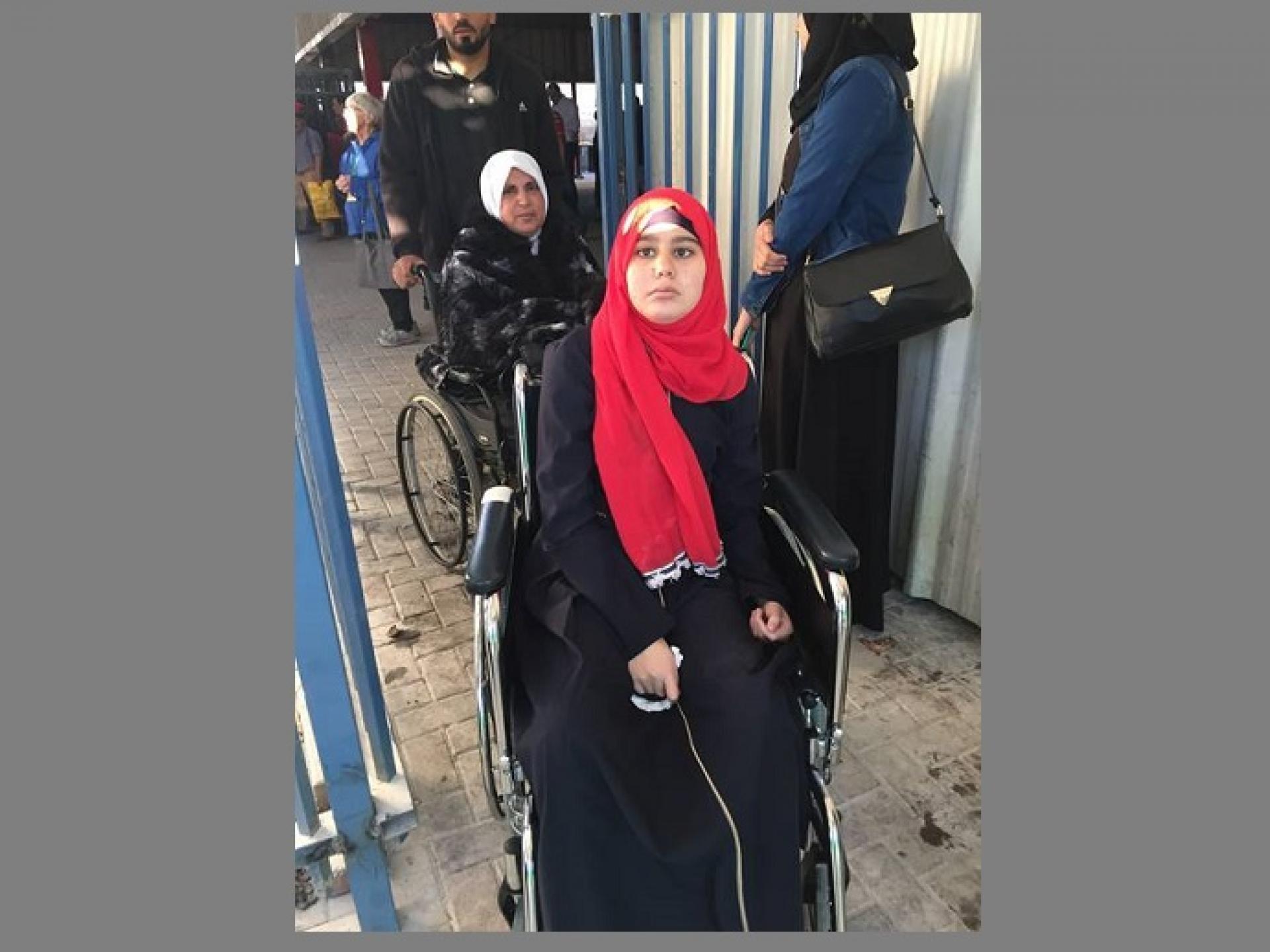 Once again we phoned for help, and were told the problem would be dealt with. After waiting with no sign of help, we phoned Hanna Barag.  She called back to say that she was told there would be help in 10 minutes.  (All this time, of course, we advised people arriving at the humanitarian gate to go the regular lines, which were getting shorter.) But as time went past,   the husband of the first wheelchair-bound woman was by now in a panic as they were running late for their appointment at Hadassah.  He  decided to do as the soldier in the aquarium  had advised. Somehow to  get through via a cage.

This was one of the most traumatic incidents we have witnessed at  Qalandiya. Only a photographer could have done justice to the misery of the occasion. Natanya followed the man through the cage,  wondering how he was going to manage with the wheelchair. He first  lifted his young wife who by this time was weeping bitterly and  who literally could not keep her body erect.  Holding her half collapsed in his arms, he somehow managed to get her through the turnstile. He then tried to get her to hold herself up against the fence while he went back to get the chair  which people had folded for him through. 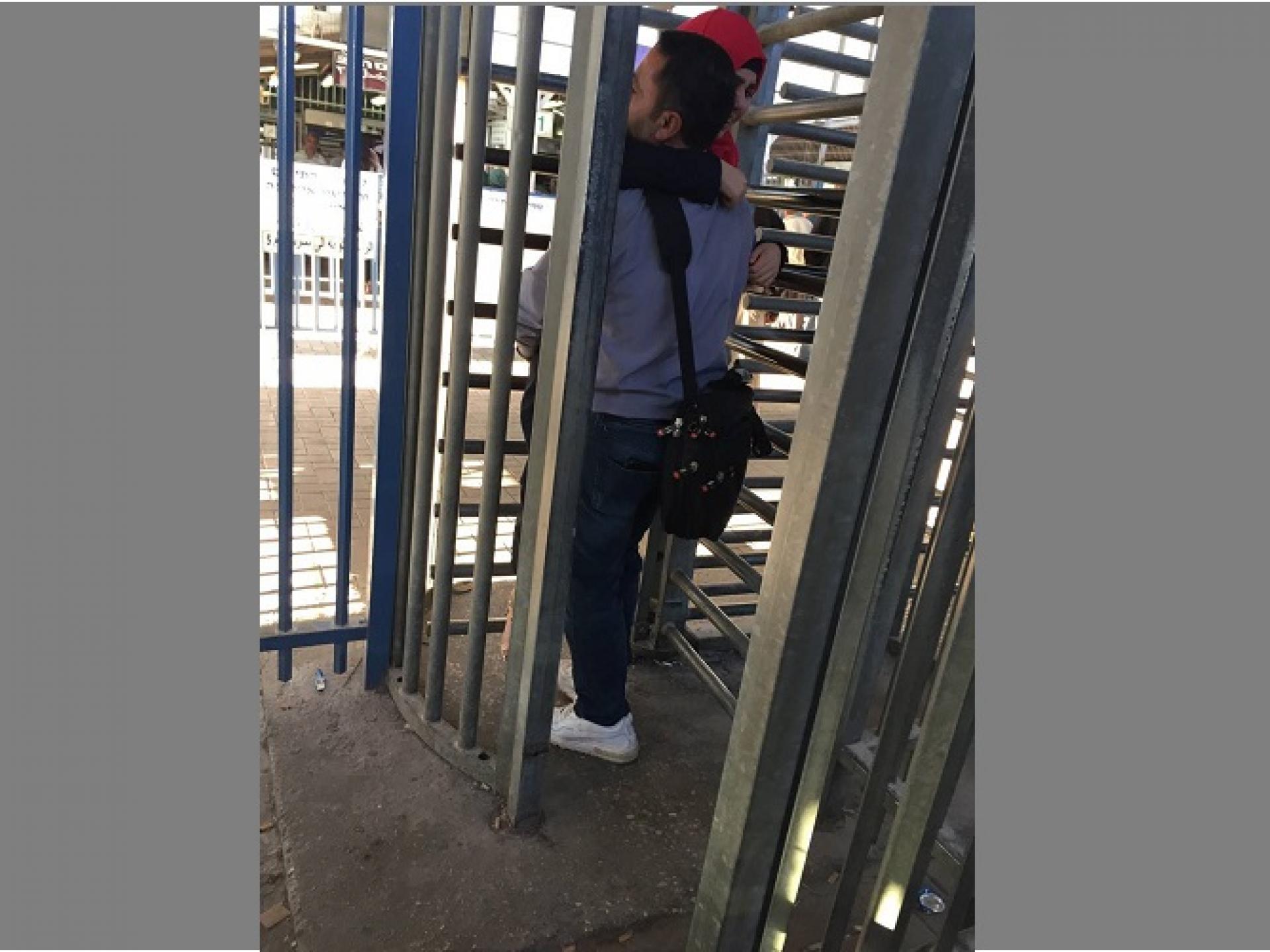 The husband is carrying his sick wife through the turnstiles
Photographer:
Natanya Ginsburg

Natanya made her way through and managed to hold her up against the fencing and the husband went back to the cage. For long minutes which seemed endless ,  with the help of other men he  maneuvered the folded  wheelchair  through the turnstile . The woman was collapsing and half screaming  and both she and Natanya were crying as she struggled with Natanya’s help to stop herself   from sinking to the floor.  Luckily at that stage another Palestinian woman came and helped to support her until her husband arrived. 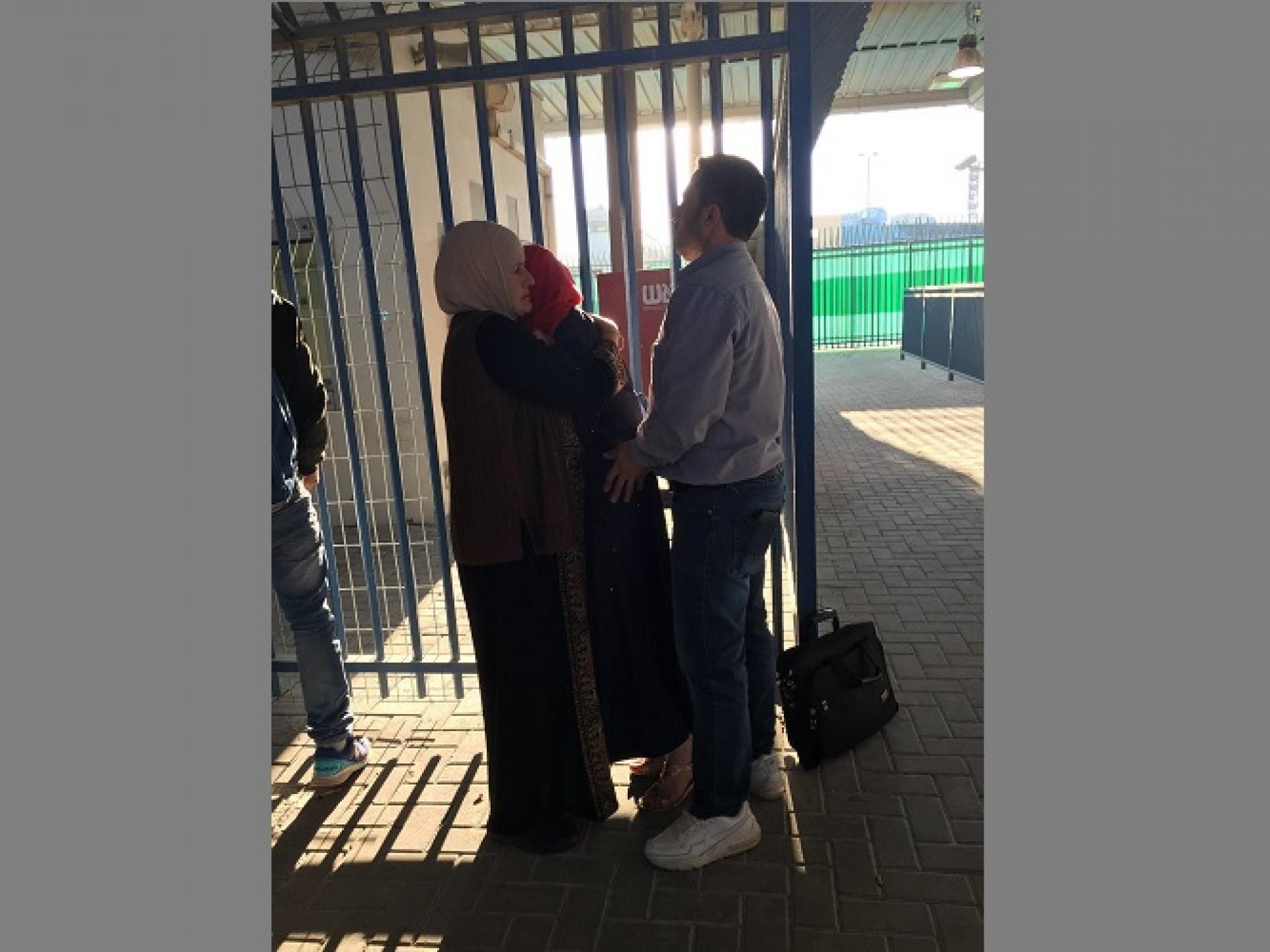 Chana was dealing with the problem on the Palestinian side

Right after this, the guard arrived. He opened the humanitarian gate and the second patient could go through less traumatically.  Both wheelchairs finally reached the same checking station, where a gate was opened for them to pass. 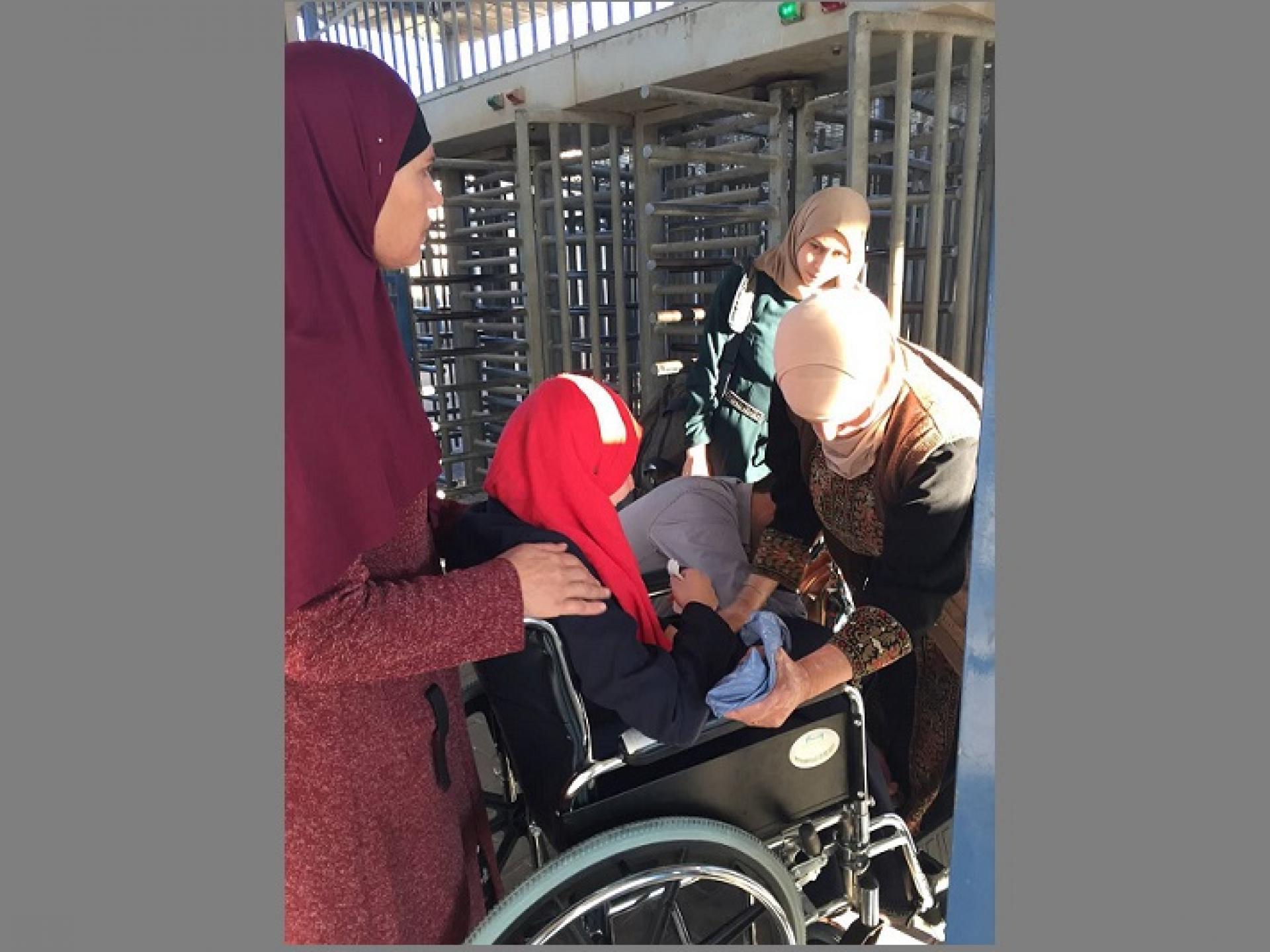 Back to the wheelchair
Photographer:
Natanya Ginsburg

It feels a bit self-indulgent to say how shattered we ourselves were by this experience, considering what the patients and their families have gone through.

We returned to town by taxi  for a change, enjoying an enlightening conversation with the driver. He lives in Kafr Akeb. Apart from the general neglect that we all know about, he claims that the unlicensed – yet ignored  – building going on there is thanks to deliberate policy – to get rid of Arabs living in East Jerusalem , who need to escape their cramped homes.

He also complained about the early morning checks on the road at Jabbar.  He says these are not even checks – the soldiers stop and ask drivers questions, causing long traffic jams. But this is really just to stop their traffic joining the main road leading to Khizme checkpoint, so that settlers travelling towards Jerusalem can have lighter traffic.

An interesting comment he made:  Many Palestinian taxi drivers like to drive in Tel Aviv, because they don’t feel the same hostility they do in Jerusalem.

Under the bridge, garbage everywhere

Used masks are thrown in the passage